GroundUp: Soweto man’s house sold behind his back for R100 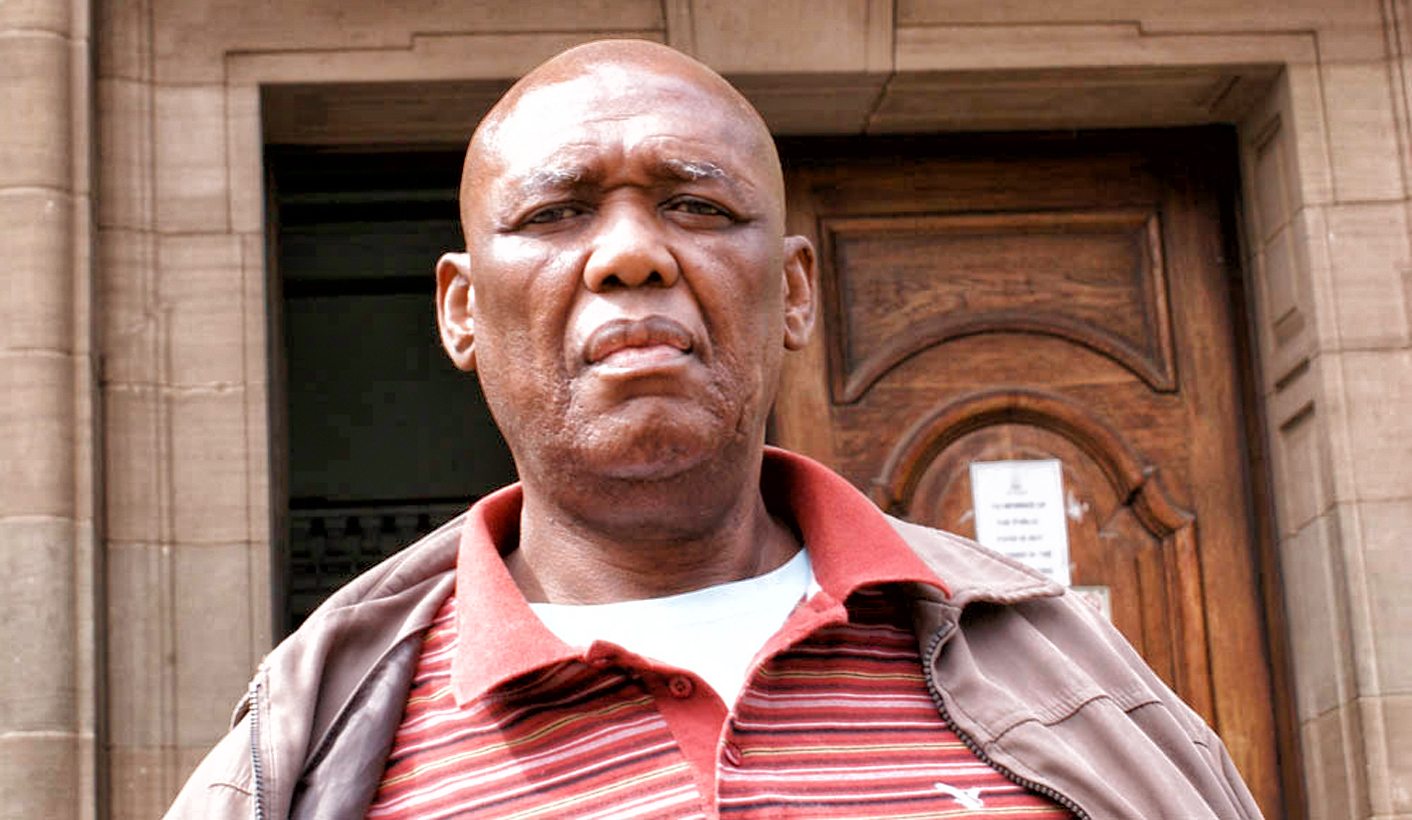 Solomon Nhlapo has to squat in his own house after police told him he was trespassing in his own home. By Ciaran Ryan for GROUNDUP.

Solomon Nhlapo, 65, is squatting in the Soweto house where his mother lived since 1965. Police have told him he is trespassing in his home which was sold in 2014 for a paltry R100. Nedbank apparently managed to obtain default judgment against him, even though he has written confirmation that his late mother’s loan is paid up.

Nhlapo turned up in the South Gauteng High Court in August this year with proof from Nedbank that his mother’s home was fully paid up. He was trying to defend himself, without legal representation, against an eviction order. To no avail. The court awarded the new owner an eviction order against him, which he is now fighting with the help of the Lungelo Lethu Human Rights Foundation, a group helping hundreds of people in similar situations across Gauteng.

These names keep on turning up as the fortunate receivers of hundreds of homes, usually in township areas, bought at sheriffs’ auctions for a fraction of their worth. These bargains are then off-loaded, as in Nhlapo’s case, to new buyers at a handsome profit.

To its credit, when contacted about this case, Nedbank appeared keen to resolve the matter. Spokeswoman for the bank, Esme Arendse, wrote: “Because it dates back so many years, it was quite a complex process to arrive at some of the facts. That said, we were able to recover information related to Mr Nhlapo and want to resolve this matter amicably and quickly. We would therefore like to engage directly with Mr Nhlapo about a possible settlement.”

But the bigger issue is how Nhlapo and hundreds of people like him end up in this position. His case is riddled with irregularities: he was never served with a Section 129 notice in terms of the National Credit Act, where the creditor is notified in writing of default on a loan; since the Section 129 notice is a precursor to legal action, Nhlapo was unable to mount a legal defence; he says he was never summonsed by the bank; and the eviction order purportedly issued against him was not signed by a judge.

These are not mere technical oversights. Until a few years ago, it was common practice for banks to draft their own court orders and have them stamped by the court registrar so as to avoid the time-consuming and costly process of setting a matter down for hearing by a judge. Since the now famous Gundwana versus Steko Development case in 2011, the Constitutional Court demands that a judge actually preside on these matters before issuing a court order.

How did Nhlapo end up in this position?

To understand this we need to understand apartheid-era property laws. Before the 1990s, black South Africans were denied the right to own land in their own country, but they could lease property for a period of 30 years from the local government. At the end of the lease period, the property title was supposed to pass to the occupants. But the National Party government saw the train headed its way if millions of black people suddenly claimed their title deeds in white South Africa.

The government created the West Rand Board, which fell under the Transvaal Provincial Administration, to issue 99-year leases when the 30-year leases ran out. In other words, residents of Soweto would have to occupy their homes for 129 years before being given freehold title. The problem is, the 99-year lease extension was never formally signed into law, which raises all sorts of questions about who has legal title to the millions of homes in Soweto and other townships.

This was a crucial turning point in the struggle against apartheid. The Civic Association of Southern Transvaal (CAST) launched a boycott of the rent on the leased houses, which swept through the townships of the Transvaal. The West Rand Board initiated a campaign of evictions against the boycotters, who launched a court challenge to stop the evictions.

One of the architects of this case is King Sibiya, who was deployed by trade union federation Cosatu to defend the rent boycotters. He now heads up the Lungelo Lethu Human Rights Foundation. In the groundbreaking case known as Mngomezulu versus City Council of Soweto in 1986, the court ruled that tenants may not be evicted from their homes for non-payment of rent, on the grounds that the City Council had not followed the law in setting rentals. It was a technical rather than a human rights victory, but it provided security of tenure for tenants in township areas.

King Sibya of the Lungelo Lethu Human Rights Foundation says thousands of people with little knowledge of the law have been evicted from their houses. Photo: Ciaran Ryan

It was around this time that the banks deemed it safe, and perhaps politically expedient, to start lending money to township residents. This was legally dodgy, since in the event of default, the property would revert to the local government – not to the bank. But banks started lending to township residents, and the consequences of this are now becoming apparent.

Back to Nhlapo’s story. His mother, Mary, took out a 99-year lease in Dlamini 2, Soweto, in 1965. Twenty-one years later, in 1986, she took out a R22,000 loan with SA Perm (later acquired by Nedbank) to add some rooms to her little property, to make space for her growing family. She dutifully paid the monthly instalments on her loan until she died in 1994, at which point Solomon took over the repayments.

King Sibiya says he is aware of thousands of cases of eviction where poor South Africans with no knowledge of the law were served with eviction notices. They packed their belongings and moved out, making way for the new owners, often property investment companies populated with politicians and former bankers.

In 1997, Solomon paid a visit to his local Nedbank branch to find out how much was owing on the loan originally taken out with the Perm. He says the bank refused to give him this information, as the bond was in his late mother’s name. Solomon informed the clerk that he was entitled, as executor of his mother’s estate, to the information. The bank evidently still refused to hand over the information. Solomon decided at this point that the bond was fully paid up and stopped making monthly payments.

Some time later a person purporting to be the new owner of his house arrived at the door, informing Solomon that he had to move out. Solomon was stunned. Unknown to him, Nedbank had apparently taken default judgment against him. Yet he had evidence from Nedbank itself that the loan was fully paid up. On April 23, 2015, Babalwa Makapela, team leader for sales at Nedbank’s retail division, wrote to Retail Cancellations in the same bank asking them to cancel Nhlapo’s mortgage bond “… as it has been paid up. The executor (Solomon) would like to apply for a title deed.”

The new owner subsequently won an eviction order against Nhlapo, who is now a squatter in the house he inherited from his mother. With the help of the Lungelo Lethu Human Rights Foundation, Nhlapo brought an application for leave to appeal against the judgment in August before Judge Roland Sutherland.

In his affidavit before the court, he says he wants the eviction order set aside on the basis that the judge did not allow him a postponement to obtain pro bono legal counsel. He further states: “The house in question belongs to my late mother Mary Matshediso Nhlapo who has paid up this house. There is proof from Nedbank that the house has been paid off. When I showed the house has been paid up, the judge refused to accept the proof before him.”

He is now appealing against the decision.

According to a PhD thesis by Advocate Douglas Shaw, South Africa is virtually unique in the world for allowing homes to be sold in execution at auction without a reserve price. Most countries require these sales to be conducted at, or close to, market price. That typically involves getting an estate agent in to value the property and allow it time to sell.

Which raises the question: why don’t the banks get a better price for properties in foreclosure? This would reduce their loss and minimise the prejudice to the defaulting client. The banks routinely claim they use sale in execution as a last resort – as they are required to do following the Jaftha versus Schoeman case in the Constitutional Court, which overturned an earlier High Court decision allowing two houses to be sold in execution for R250 and R196 respectively. But as Shaw’s research shows, South African banking practice when it comes to foreclosure is among the most abusive in the world.

Given Nedbank’s willingness to reach an accommodation, there may be a happy ending in this for Solomon Nhlapo. That’s one case out of thousands just like it involving all the banks. DM

Main photo: Solomon Nhlapo has been told he is trespassing in his own house. Photo: Ciaran Ryan.