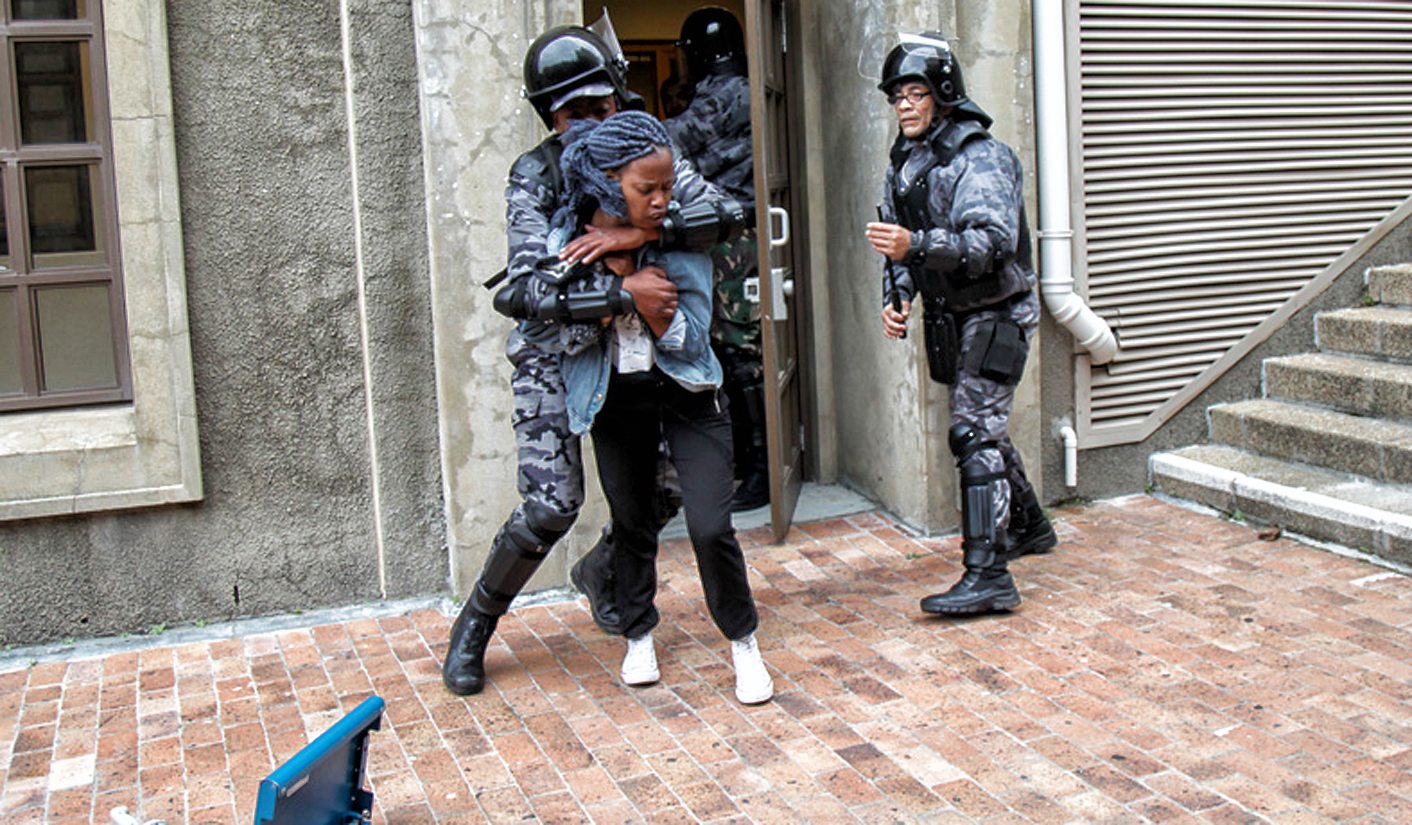 Violent clashes erupted between student protesters and private security at the University of Cape Town (UCT) on Tuesday, leaving a number of protesters injured and four arrested. By Ashleigh Furlong and Ashraf Hendricks for GROUNDUP.

What began as a morning of disrupting campus activity escalated when protesters attempted to enter the building in which the library is situated and were met by private security armed with shields and batons.

After a verbal confrontation with the security officers, one protester smacked one of their shields with a stick. Following this, fellow protesters began hurling rubbish bins at the security and ramming the officers with a large bin. As the private security attempted to detain some of the protesters, other students hurled stones at the officers.

During the confrontation, a female protester’s braids were ripped from her head, several protesters were pepper-sprayed and it appeared that another protester’s face was bleeding.

There was a large police presence on campus, but when the violence broke out at the library they were nowhere to be seen. They later came on to the scene and began making arrests.

Earlier in the day, GroundUp witnessed four students being arrested after their car was followed by two police cars and ordered to pull over. The four were then taken to the Rondebosch police station where they were told that the police had nothing to charge them with.

In relation to this, UCT said on Tuesday afternoon that the car contained sewage canisters. UCT also stated that on Monday night “five containers of raw sewage were found and removed from outside two UCT buildings: the School of Economics building on middle campus and the Steve Biko Students’ Union building on upper campus.”

The arrested students were then released. Some of them returned to the protest on campus, where a singing group of students were entering buildings and asking the staff and students inside to leave.

A protester hurls a dustbin at a private security guard. Photo: Ashraf Hendricks

UCT was nearly empty, as most students are working off-campus. This is as a result of UCT’s implementation of “alternative and mixed teaching modes to be determined by each faculty and department as per their specific needs” in response to the ongoing protests.

Student leader Athabile Nonxuba told a group of staff that the protests “have been peaceful for four weeks but we can’t guarantee that it will be like that forever”.

Another student leader and SRC candidate, Sinawo Thambo, said in a press briefing that students had been “brutalised” on campus and that the police’s instruction earlier to the protesters that they couldn’t gather in a group was illegal.

Thambo said that the system that the university had put in place in their attempt to complete the year was excluding students on a “mass level”.

He said that they rejected these methods. “It is highly likely that the supposed alternate models will be electronic, which excludes people who do not have access to the necessary resources,” said Thambo, reading from a statement released on Sunday.

“We will continue the shutdown and we will do so with the pain and anxiety for the dire situation of our comrades in prison. We will not be deterred. We urge the university community to continue engaging the movement and frequent discussions and events hosted by the movement,” he said.

Student leader Simon Rakei expressed concern that the large number of arrested protesters would “normalise” arrests and violence. He also claimed that the police were tapping students’ phones and that a member of the student movement had heard a recording of their voice coming from a private security vehicle.

When asked about the methods that the protesters are using to achieve their aims, Rakei said that when protests became violent they were no longer protests – it was a riot.

“And again that is in direct response to either the presence of security or police. We are not the ones who say as a strategy, or tactic of protest, we are going to burn something down,” he said.

For possibly the first time during the latest student protests, a number of protesters wore Democratic Alliance Student Organisation (DASO) T-shirts. This comes following a satirical video posted online by people claiming to be members of the DASO Black Progressive Caucus. In the video, the students express their support of the Fees Must Fall protests.

In response to this, DASO UCT released a statement saying that it “rejects in its entirety a video posted on social media by protesting students a part of the so called ‘Progressive Alliance’ at UCT which is made up of PASMA, Bantu, 4WRD and Vanguard.

“They have paraded themselves in DASO T-Shirts and have given false stances on issues we have already made clear to the student populous. We reject that there is a caucus aimed at a specific race within the DA and DASO because we are a non-racial student organisation which listens to the needs of all students regardless of race,” stated DASO UCT.

Keeping cool under pressure. This onlooker seemed unfazed as protesters hurled rocks over him towards private security in the background. Photo: Ashraf Hendricks

UCT’s Communication and Marketing Department stated: “The situation has been particularly difficult on UCT campuses today – with reports of violence, harassment and intimidation. The executive condemns the continuing violence on campus, and would like to thank those students and staff members who are doing everything they can to support the completion of the academic project for 2016.” DM