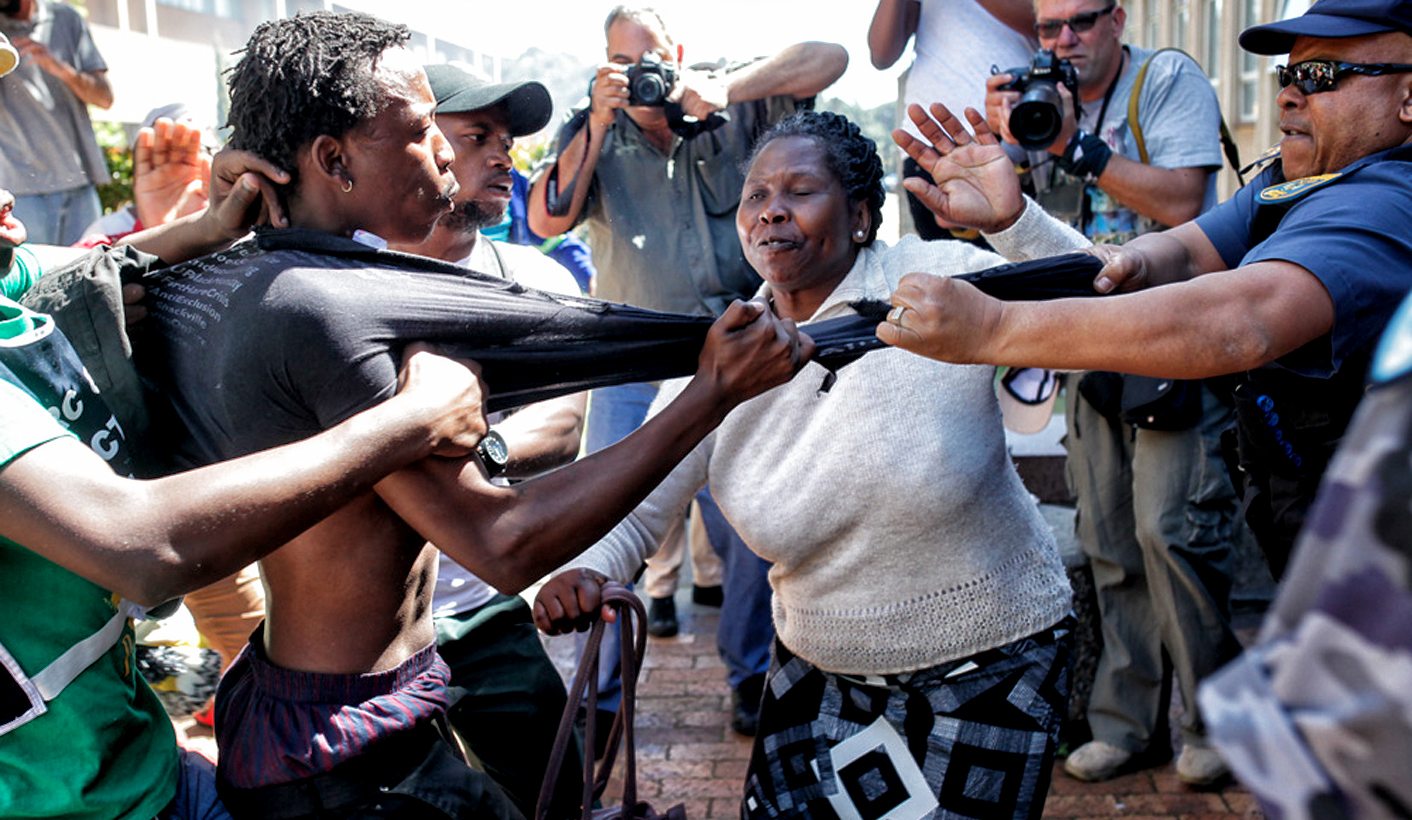 At about 06:30 on Monday about 30 student protesters blocked Baxter Road outside the University of Cape Town’s Tugwell and Leo Marquard residences. This is the main stop of the university’s shuttle service. The protesters eventually swelled to about 100 people. By GROUNDUP staff.

At times private security moved the protesters out of the road, but the protesters immediately reformed their human barrier. Police watched from about 30 metres away.

Private security tried to dismantle the human barrier on Baxter Road, to no avail. (Ashraf Hendricks)

At about 09:20 the protesters marched to middle-campus and began to disrupt the economics and law faculties. As it was, there was very little activity on both middle- and upper-campus, because almost all classes have been suspended.

According to an e-mail sent to his department by Professor Lawrence Edwards, Head of Economics, faeces was thrown on the first floor of the building.

“At times we moan about how this building was designed and how we ended up with a wind tunnel through the middle. Well, today, we can be thankful for this,” wrote Edwards. He wrote that “professional cleaners that specialise in human waste removal” had been called to clean the building.

At the Kramer Building, where the law faculty is located, faeces was thrown both outside and inside the building. Private security was on the scene, but no police.

Faeces on the floor of the Law Building. (Ashraf Hendricks)

Then the protesters marched to upper campus. They went into buildings to find classes to disrupt. A broken door window on the RW James building could be seen. Various science lectures take place in this building, although it’s unclear if any took place today.

The police then arrived and with private security blocked the entrance to the RW James building. Protesters and police at times argued and scuffled. Stun grenades and pepper spray were used to disperse the students. GroundUp witnessed one protester being detained by police.

On Monday afternoon protesters held a meeting on UCT’s Plaza.

Protesters announced that they would continue disrupting lectures, both in classrooms and online, until their demands are met. Student leader Sinawo Thambo called for the release of UCT student Masixole Mlandu (who was arrested several days ago), fee-free education, and decolonised curricula. A representative from the Health Sciences faculty encouraged supporters to engage in peaceful protest despite private security and police presence, while UCT maintenance workers demanded remuneration from vice-chancellor Max Price for missed work days and an end to outsourcing of labour.

“We will continue protesting,” said Thambo. “We urge everyone to be alert and aware and never to be alone.”

In a statement released on Monday afternoon, UCT’s Communication Department said: “We face a level of protest this morning which we are not able to contain with private security officers alone. The South African Police Service is on campus in an attempt to manage the situation.”

It continued: “As you are probably aware, groups of protesters are disrupting activities across middle and upper campus. Unlawful acts, such as breaking windows, forcing open locked doors, and throwing human sewage, have been reported. There are further reports of intimidation, damage to property, violence, disruption and confrontation with security officers and we need the support of SAPS’s Public Order Policing to manage the situation.”

The statement also said that the university had been informed that it and several other universities have been declared a “level-three security situation” by the National Commissioner of SAPS. This “means that the Public Order Police are in command of the situation. We appeal to staff and students not to interfere with the work of members of SAPS, not to contribute to confrontations or any situation of conflict.”

However, at about 17:45 UCT stated that it had been informed incorrectly about the “level-three security situation” and that vice-chancellors “remain fully in control of the campuses”. DM

This statement was modified after publication to include that UCT withdrew the claim of level-3 security.