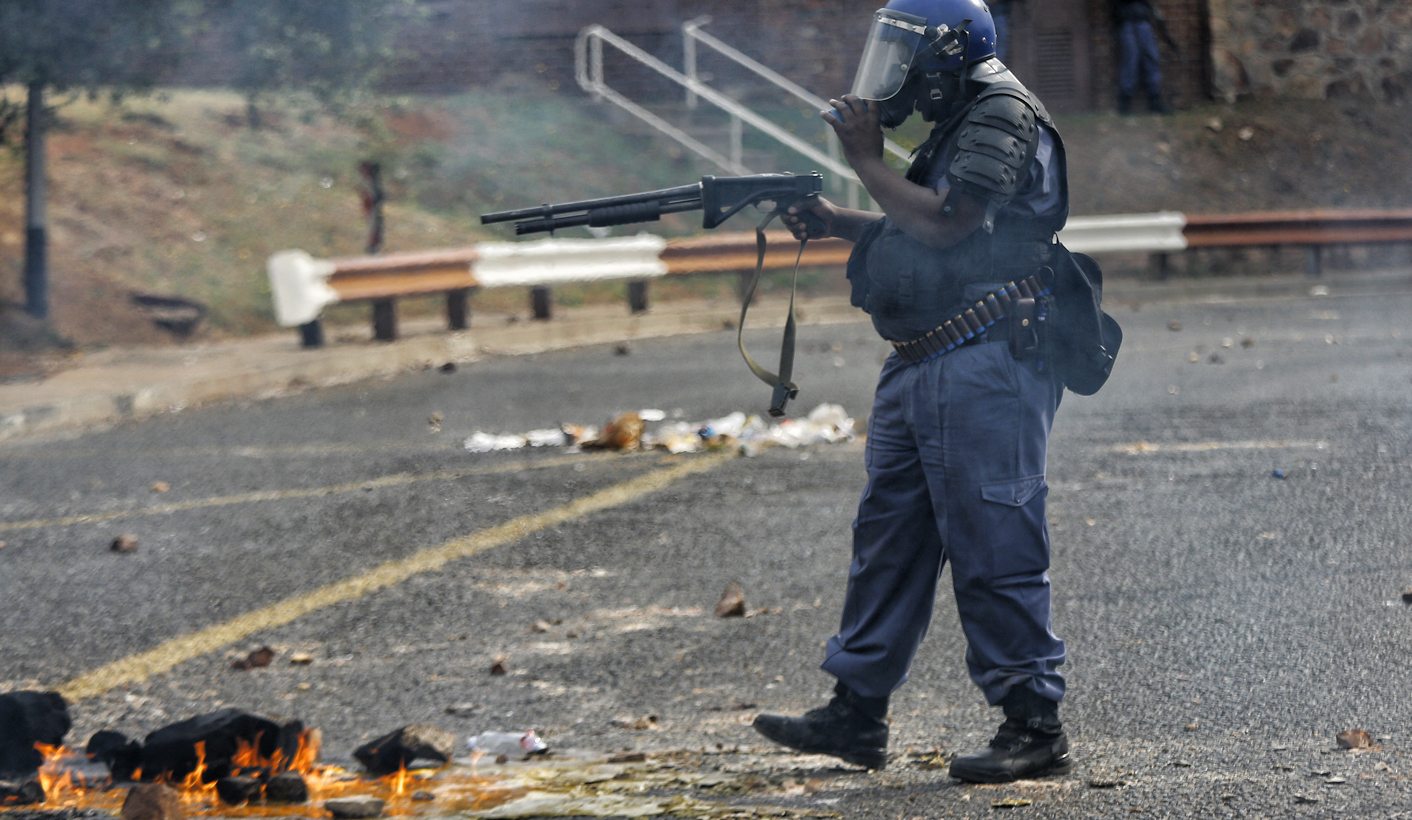 Despite denials from police, demonstrating University of Witwatersrand students say police are targeting their leaders to weaken the movement. One student allegedly claims he was abducted, abused and dumped in Limpopo. By GREG NICOLSON.

Wits student Arthur Muhamelwa was arrested on Sunday. He is on the Wits Fees Must Fall logistics task team and student leaders looked for him at the Hillbrow, Jeppe and Cleveland police stations. “#WhereIsArthur”, the SRC wrote on Facebook.

“Something here is not right, I’m still on a moving police Quantum passing a board written Bela Bela and Polokwane and a board written welcome to Limpopo,” Muhamelwa wrote in an SMS, seen by Daily Maverick, just before 20:00 on Sunday evening. He was allegedly stripped naked, tortured and abandoned by the police near a river in Thohoyandou, Limpopo.

Muhamelwa’s alleged abduction came as student leaders claim they are being targeted by police who want to quell Fees Must Fall protests by arresting and intimidating them. During student protests over the last month, 567 people have been arrested, including many student leaders.

“For now I can’t say anything. The lawyers told me not to say anything [yet] about what’s going on,” said Muhamelwa on Monday evening. After allegedly being dumped in Limpopo, Muhamelwa had to find his own way back to Johannesburg with support from other students. He returned to his residence and said he was safe.

SAPS spokeswoman Brigadier Sally de Beer on Monday said she heard about the alleged incident through the media.

“Basically we just called on the students to register a formal complaint so we can investigate,” she said. An officer was sent to Wits to take a statement from Muhamelwa, but De Beer had not yet heard whether the officer met Muhamelwa. “Obviously we’re trying to establish if there’s any veracity,” said De Beer.

“Several allegations are being made via social media alleging, among other things, that female students have been attacked, assaulted and randomly shot in their residences, particularly at Wits,” said Phahlane. “We have looked into these allegations and found absolutely no evidence to support them and police deployed there have vehemently denied such conduct.”

On the alleged abduction of Muhamelwa, the acting police commissioner said, “Two instances that came to light today involve a student alleging he was picked up by the police and transported to Limpopo where he was dumped in the veld.”

He also cited another allegation that a student was locked in a police vehicle and pepper-sprayed. “In both instances we urge those who were allegedly violated to approach the competent authority and lodge complaints for investigation purposes.

“Trial by social media is totally inadequate and does not allow for both sides to state their cases factually and for the truth to be made known,” said Phahlane.

Wits spokesperson Shirona Patel said, “The university was alerted last night that a student allegedly went missing yesterday. He was apparently located in the early hours of this morning. The matter is being investigated by campus security. The dean of students is working on bringing the student back to campus.”

Phahlane said 567 people in 265 cases had been arrested during protests at higher education institutions across the country. He noted the Sunday arrest of former Wits SRC leader Mcebo Dlamini, who has been prominent in both last year’s and this year’s protests.

“His arrest has led to allegations that the police is specifically targeting student leaders or trying to destabilise the Fees Must Fall initiative. This is untrue. The role of the police is to prevent, investigate and combat crime and to maintain stability,” said Phahlane.

Dlamini appeared in the Johannesburg Magistrates Court on Monday but the bail application was postponed to Tuesday as the prosecutor wanted to first establish Dlamini’s permanent address. He faces public violence, theft, malicious damage to property and assault charges.

The SAPS has said it supports legal and peaceful protests, but Daily Maverick has witnessed police using stun grenades and rubber bullets to disperse peaceful protests. Over the weekend and on Monday morning, protests at Wits continued. Students claimed police attacked a residence, leading to protests moving into the streets of Braamfontein, with both students and non-students arrested as property was damaged. Students have also protested against a university-imposed curfew, which was revised on Monday.

Former Wits SRC leader Shaeera Kalla said she had spoken to Muhamelwa and students were determined to take the issue forward legally to expose police brutality and ensure it’s not just a footnote in this year’s protests. Kalla said student leaders were being followed and photographed by police. The SAPS, with support from the university, were targeting student leaders, as well as lesser known members of the movement, and arresting them on trumped up charges to try to derail protests for free, quality and decolonised higher education. “There is no doubt about it. This is happening,” said Kalla. She cited the wide-ranging charges against Dlamini and the case of University of KwaZulu-Natal leaders locked up for weeks.

“You can cut all the flowers but you can’t stop spring coming,” Kalla quoted Pablo Neruda. “Students are fighting back, despite us being there or not being there.”

Kalla said Wits Fees Must Fall has been pushing for meetings with management but claimed the university has resisted, is not engaging and is avoiding taking students’ demands seriously.

On Monday Wits’ Patel said, “We remain open to engagement and negotiation as we believe that these issues can only be resolved through negotiated outcomes. Our sole focus must be on the completion of the academic programme in the next two weeks.”

On Wednesday, a meeting will be held at Holy Trinity Catholic Church to try to chart a way forward. Speakers include former Cosatu leader Jay Naidoo, former Public Protector Thuli Madonsela, and Father Graham Pugin, who was shot by police with rubber bullets last week outside his church. DM

Photo: An armed South African police officer lifts his gas mask after stones were thrown at them during ongoing protests with students from Wits University as the #FeesMustFall movement continues its protests against the cost of higher education, in Johannesburg, South Africa, 17 October 2016. EPA/KIM LUDBROOK