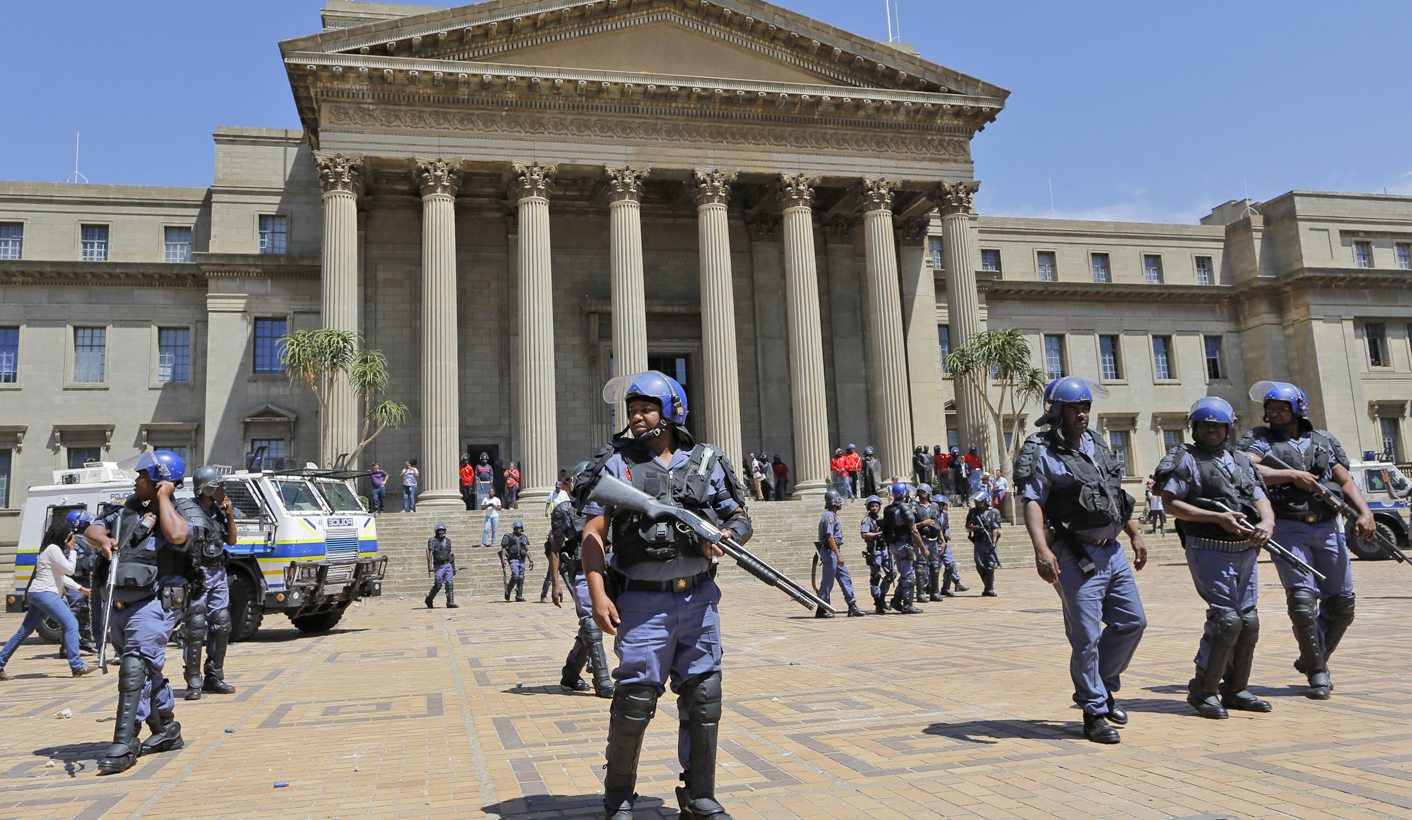 The presence of heavily armed police and security guards at the University of Witwatersrand seems to have put paid to any chance of stakeholders coming together to seek a solution to the ongoing funding crisis. Instead the struggle has been characterised by terrifyingly violent running battles with police in the past week, which have left some students battered, and no time at all for the round table. By BHEKI C. SIMELANE.

“It doesn’t feel like campus any more, it feels like a military base. It’s frightening,” first year Bachelor of Science student Tshegofatso Magano told Daily Maverick. Magano was speaking from the Wits West Campus last Thursday as running battles between police and students continued.

Magano said, “I was appalled and shocked to experience for the first time police shoot at students.” The 19-year-old Magano said he had never participated in a protest in his entire young life and the sight of heavily armed police on campus scared the daylights out of him. “It’s hectic.” Magano said as he inspected a rubber bullet wound to his leg from last Monday’s violence.

Many Wits students are young middle-class individuals who have never participated in protests, let alone violent ones. There is no guessing what the violence incubated by the prolonged presence of the heavily armed new guard at Wits (police) is doing to the psychology of these students.

“How many police do you think are here?” one female student asked on Thursday. “All of them I think.”

While she and her colleagues burst out in laughter, they might also have realised that this view was not far-fetched.

When being shot at, students capture the emotions in their songs. As shot after shot rang last Monday afternoon after the violence had spilled onto the streets of Braamfontein, occupants of Diamond House, some of whom are Wits students, started singing students’ favourite struggle anthem, Solomon Mahlangu. The song captured the mood, but also spurred students on.

Hanging from almost every window, occupants of nearby buildings joined in the singing of the song, much to the delight of students. It was sung beautifully.

Throughout last week, Wits students showed resentment for three names, – police, Adam Habib and Blade Nzimande. Police for “indiscriminately shooting at us unprovoked and taking over our campus.” Habib for ‘playing double standards and neglecting students’ interests’, and Blade for ‘pleading ignorance and reneging on the Government’s promise of free education’.

Last Monday just before the violence spilled into Braamfontein, some 200 students ended trapped in one of the halls. Everyone in the room was teary, choking from tear gas fumes. At this point police would have shot at a shadow, while a police chopper hovered low above the building, occasionally and conveniently ejecting more tear gas and ensuring that no one left the building.

Frightened and apparently shaken female students huddled along the passages, gasping, amid a litter of condoms. There is a belief among students that apart from curtailing the spread of HIV, condoms also contain the effects of tear gas fumes in the eyes.

“Have some,” said one female student as she handed a handful of condoms to an international journalist. “Thanks, I only use condoms for one thing,” he said while tears trickled down his cheeks. He had stopped complaining about the absence of local journalists to capture the scenes of choking students.

Fear was written all over students’ faces when they finally got a chance to leave the room. They sped off hurriedly with their hands blocking their ears.

“Shooting at us gets me so agitated that I want to fight back. I just want to retaliate,” Wits BA Law student Rashaad Yusuf Dadoo said. Dadoo was unlucky. Trapped in the hall with other students, Dadoo had a rubber bullet repel off his left elbow while he struggled to see and breathe because of teargas fumes. He was on the verge of collapsing. Trapped with students were also some SRC members, among them Wits SRC Deputy General Secretary Fasiha Hassan, who tried to move Dadoo around to try to protect him from further tear gas inhalation, but the fumes were everywhere.

Speaking from the West Campus on Thursday, first year Bachelor of Science student, 18-year-old Raheel Walljee said she no longer trusts the police. Walljee and her three friends had been attending class but chose to join a meeting at the West Campus on Thursday during break. As student leaders were explaining how students should conduct themselves during protesting, almost out of the blue police started firing rubber bullets.

“I don’t trust the police, not any more. They must leave. They are intimidating and scary. I have never been involved in a protest, let alone one characterised by so much violence. It’s a truly traumatic experience. We are here for a purpose but considering the state of affairs, we should be forgiven to think that we are better off in the safety of our homes,” Walljee said.

Students and journalists have all been treated to dramatic scenes of violence during the 2016 fees protests at Wits. On Monday 10th, students watched in shock as a police officer attacked student activist Mcebo Dlamini. The momentum felled both and a struggle ensued as Dlamini tried to break free. The moment was widely captured. Dlamini’s gesture indicating which direction students should march, aggravated the officer. The students were to march through a heavy police guard, and the officer felt Dlamini’s gesture in that direction undermined his authority. This played out on the steps of the Great Hall. (Dlamini was reportedly arrested regarding this incident over the weekend.)

The sight of angry students throwing themselves at armed guards lashing away with their batons instantly blurred the line between bullets and books, war and peace, between guardian and foe, hooligan and student. Both police and security guards constantly resorted to action which agitated students. The police shot at students while guards denied them entry into the Great Hall, sparking more chaos.

And apart from the fact that police drove students onto the streets of Braamfontein – a fortress of Johannesburg’s haves and have-nots – it became difficult to tell whether students or Johannesburg junkies perpetrated the violence that played out on the Jorissen/ Melle intersection where a bus was also torched.

Police presence was not only beefed up towards the end of last week, but the operations and directions of senior officers on campus were more sophisticated. Protesting students were swiftly combated by police. Gatherings were closely monitored, forcing students to change their strategy and protest overnight.

Many first year students who said they had never participated in protests were of the view that the strike was not yielding any positives except being reduced to daily running battles with police.

“These running battles will not take us anywhere, we need either a plan or a solution,” one student said. The students argued that authorities would not take the call for free education seriously if there were divisions or they disagreed.

South African students’ call for free education also has a demand that education be decolonised. Students’ demands would be better supported if they remembered that while free education for all might be achieved in a single announcement, decolonising the system might take a while. Currently most South Africans would like to believe that so far students have been reasonable in their demands for free decolonised education.

Wits University said learning will continue on Monday, while some students vowed to continue with the shutdown. Meanwhile a heavy police presence continues to haunt students and cause discomfort for many more while negotiations drag on. DM