ICG: Yemen’s terrible war is about to get worse 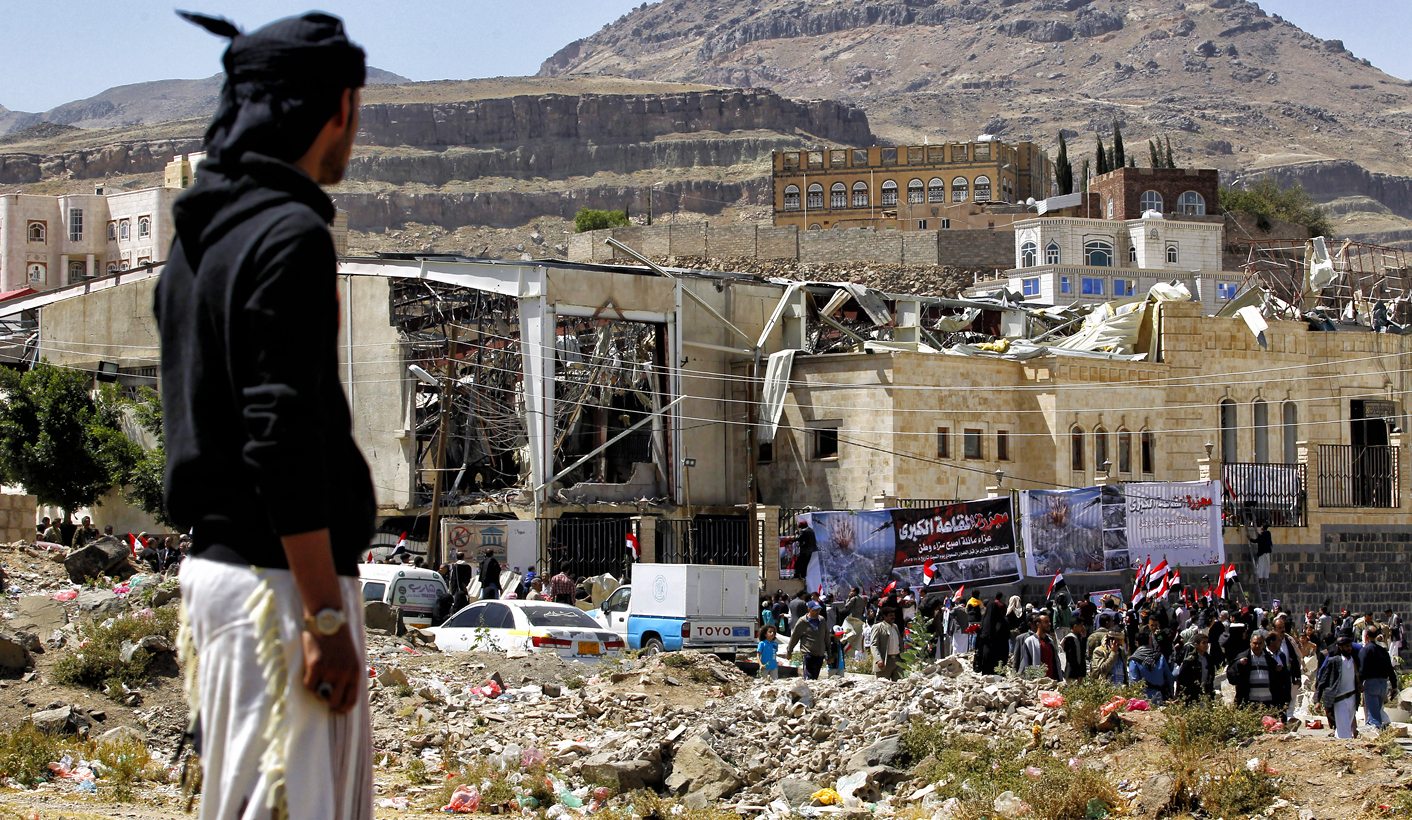 The bombing of a funeral has empowered the country’s worst forces and could drag America into the fray. By INTERNATIONAL CRISIS GROUP.

On Saturday, October 8, an airstrike from the Saudi-led coalition ripped through a crowded funeral in the heart of Yemen’s capital, Sana’a. At least 140 mourners were killed and more than 500 injured. The unprecedented strike has killed peacemakers, empowered militants, and fueled the desire for revenge, making the prospects for peace in this conflict ever dimmer.

Yemenis are no strangers to horrific attacks on civilians. After 18 months of war, both the US-supported, Saudi-led coalition and its adversaries, a combination of Houthi rebels and fighters loyal to former President Ali Abdullah Saleh, stand accused of flagrant violations of international humanitarian law, perpetrated seemingly without consequence. The United Nations  estimates  the war has claimed more than 10,000 lives, including 4,000 civilians, with the majority of deaths caused by coalition airstrikes. Yet this strike stands out.

The attack is likely the single-most costly strike, in terms of civilian casualties, during the course of the war. While other violations have been shrouded in a fog of war, this one happened in the capital at a well-known landmark, reducing the chances of deniability or ambiguity about its legitimacy as a target. Many killed in the community hall were among the country’s political, tribal, and military elite, and their deaths have had significant political and social repercussions. It was also a clear violation of traditional norms that protect the sanctity of funerals, even between bitter enemies and warring parties.

As shock and sadness engulfs Sana’a, some Yemenis are hoping against all odds that the event could serve as a spur for a peace agreement. But this hope is likely misplaced. The bombing killed a number of important political and military personalities supporting a peace deal, among them the mayor of Sana’a, two Yemeni members of the UN cease-fire monitoring team, and a general expected to play an important post-conflict security role. Their deaths empower hard-liners over peacemakers while undercutting capacity to implement any future accord.

Yes, the carnage has drawn international condemnation from U.N. Secretary-General Ban Ki-moon, who has called for an international investigation. It also pushed the U.S government, which has sold Saudi Arabia approximately  $22.2-billion in weapons  since the war began, to launch a review of its support to the coalition.

But it is not clear what impact, if any, these statements will have.  The UN has thus far been a helpless bystander, unable to broker peace or even secure an independent investigation into violations of international humanitarian law by both sides. The United States and Britain, both coalition supporters and arms suppliers, have repeatedly demonstrated a high level of tolerance for potential war crimes by their allies. It is unclear what red lines they have.

In the absence of a negotiated settlement, the country is poised to spiral further into chaos. Since UN peace talks collapsed in August, both sides have engaged in a series of tit-for-tat escalations. Houthi fighters, along with those loyal to Saleh, have increased cross-border rocket attacks and raids into Saudi territory. On October 1, they attacked an Emirati vessel in the Red Sea off the coast of Mokha, approximately 50 miles north of the Bab el-Mandeb Strait, through which millions of barrels of oil pass daily. The Saudi-backed government of President Abed Rabbo Mansour Hadi, meanwhile, moved to put the financial squeeze on his opponents by announcing it would move the Central Bank of Yemen from rebel-controlled Sana’a to the government’s temporary capital in Aden. Only days before the funeral attack, Hadi-aligned forces launched a major military offensive northeast of Sana’a, at which their highest-ranking military commander to date was killed.

Now the funeral attack will likely produce an even more significant military escalation by Houthi forces along the Yemeni-Saudi border. This, in turn, will confirm Riyadh’s worst fears and secure US support in defense of Saudi territorial integrity. Already Houthi leader Abdul-Malik al-Houthi and Saleh have issued impassioned calls for mobilisation along the border — a call that is being met by enraged tribesmen throughout the north. Their forces have already fired two ballistic missiles — one toward Saudi Arabia’s Jizan province and the other, for the first time, deep into the kingdom, toward the city of Taif in Mecca province. It remains to be seen if they have the ability to make good on their threats to push into Saudi territory, especially into Jizan, Asir, and Najran provinces, mostly mountainous areas that many Yemenis consider part of historic Yemen.

The growing violence may endanger American lives as well.  On Oct. 9, the U.S. military reported two missiles were fired at the guided-missile destroyer USS  Mason from Houthi-controlled territory just north of Bab el-Mandeb. U.S official  claimed  that the USS Mason was targeted again in a failed missile attack on Oct. 12. The Houthis denied the October 9 strike, and the United States has yet to confirm their responsibility, but if confirmed, it constitutes a major escalation near the strategic strait.

The anger and hostility directed toward the Saudi-led coalition in the aftermath of the funeral hall strike will make it harder to contain the regional rivalries unleashed across the Middle East and to convince Yemen’s domestic parties to reach a negotiated settlement. Indeed, the premonitions of Abdul-Qader Hilal, the Sanaa mayor who was killed in Saturday’s attack, are ones that deserve our attention now.

Two and a half years ago, I sat with Hilal in his home on the outskirts of Sana’a as he received rounds of Salafi, tribal, and Houthi mediators in an attempt to solidify a truce between warring factions in Yemen’s north. A politician with connections to all sides of the country’s complicated political and tribal mosaic, he predicted a conflagration if violence in the north was not contained by integrating the Houthis into the political system. When the military tide was unleashed, he warned, it would be hard to stop. “If the Houthis take Amran [a city north of Sanaa], they will take Sana’a,” he said. “If they take Sana’a, we will be talking about [stability in] Riyadh a year later.”

At the time, his concerns seemed inflated, even outlandish. In light of recent developments, they appear ever more prescient. DM

Photo: Yemenis take part in a rally in solidarity and honor of the victims of Saudi-led airstrikes targeting a funeral hall a week ago, outside the destroyed hall in Sana’a, Yemen, 15 October 2016. According to reports, a Saudi Arabia-led investigation into the 08 October-airstrikes carried out by the Saudi-led coalition on a packed funeral hall in the Yemeni capital Sana’a concluded that the coalition’s warplanes had wrongly targeted the funeral ceremony, killing more than 140 Yemenis and injuring hundreds more. EPA/YAHYA ARHAB