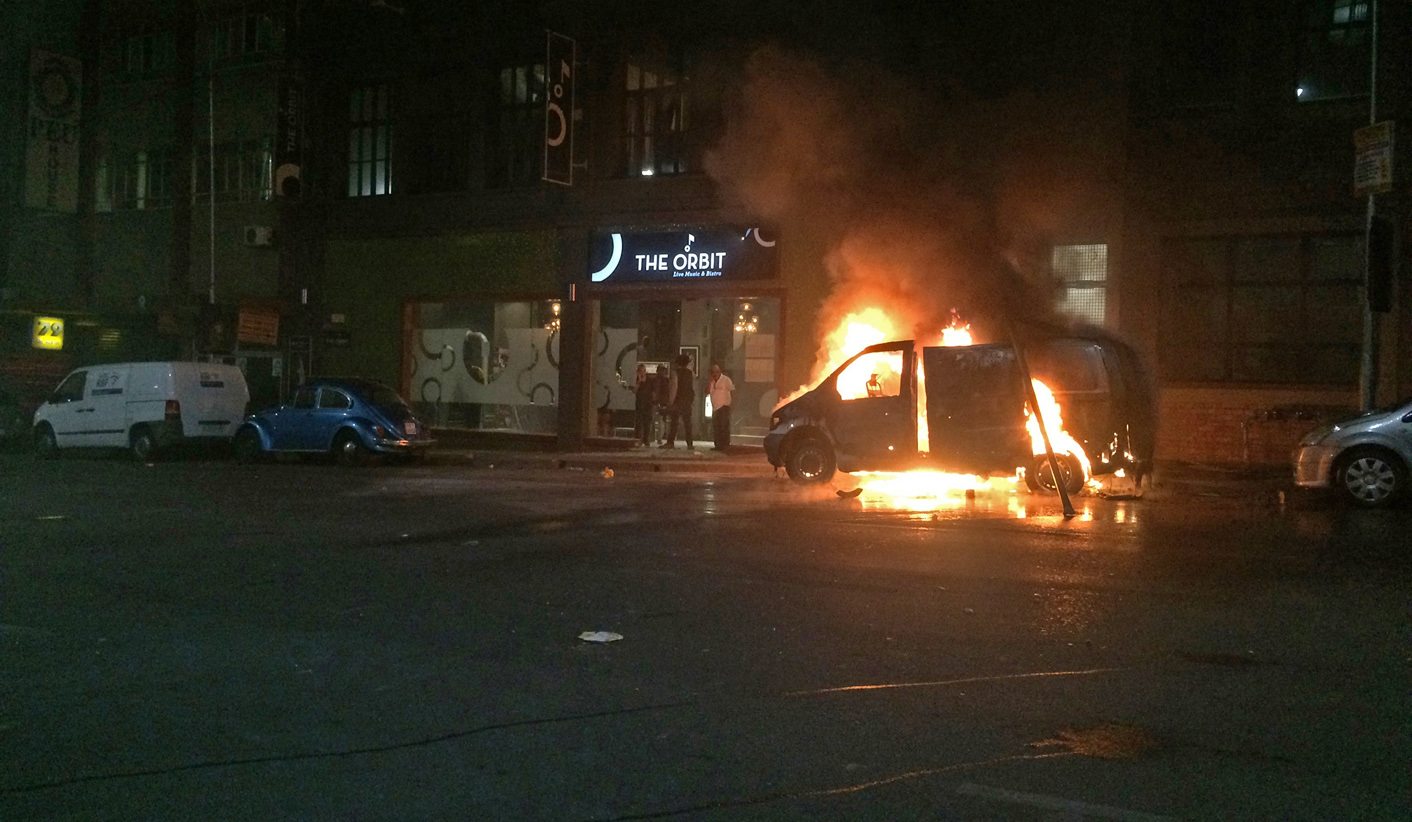 Since its establishment in Braamfontein, Johannesburg in 2012, the Orbit Jazz Club & Bistro has become a haven for local musical artistry — a hallowed home to rising young stars from Khayelitsha and African icons alike. On Friday night the Orbit hosted the soulful sounds of the latter — celebrated vocalist Ma’Sibongile Khumalo — but also something else. Something wholly extrinsic. The sound of burning. By DIANA NEILLE.

It wasn’t as if the rows of people filling the Orbit jazz club in Braamfontein weren’t aware there was a running battle between police and protesters going on up and down the street outside. The energy in the room was restless. It reverberated off the seven-stringed bass, the reverent crowd, the bustling waiters carrying ganache. Jozi’s cool and cultured, predominantly black middle class, out for a Friday night of world-class music by one of their own. Ma’Sibongile Khumalo, standing quietly against the baby grand as her young guest soloist Linda Sikhakhane stepped forward for his saxophone solo, commanded all eyes. Her eyes, though, flicked now and again to the window overlooking the battleground below.

Pentatonics and paradiddles drowned out the pah pah of rubber bullets fired round after round at the retreating backs of protesters outside. Their compatriots flung projectiles at the nyala from their apartments and ducked as the riot police rifles snapped up to retaliate. Inside, applause for Sikhakhane swelled.

Walking towards the Orbit from a swanky conference dinner four streets down, we were warned not to film iPhone videos of the young man with a slingshot taking aim at the police just 20 paces up the road. We were conspicuous by everything about ourselves.

“I really don’t think you should do that, hey. These guys are crazy.”

Perhaps it was the beers in the hands of many standing shouting slogans and taunts to the police on the corner of de Korte Street, or the sound of Ma Khumalo’s voice coming out of an SABC broadcasting truck parked outside that lent a falsely festive air to the scene. Perhaps we’re all just too damned accustomed to the sounds and smells and shouts of protest to register the threat of rage just one stone’s throw away.

Or perhaps it’s because it was no longer a novel scene to us journalists attending an awards ceremony dinner nearby, suffering a bit of action FOMO from the comfort of our larny venue, that we came to rubberneck and failed to acknowledge the reality of the violence that was about to escalate. The previous Monday, protesting students demanding free, de-colonised education spilled out the gates of the University of the Witwatersand onto the streets of downtown Johannesburg with police at their heels. The chaos that ensued made international news. A priest protecting protesters was shot in the mouth with a rubber bullet outside his church. A bus was burned and hot smoking garbage was strewn across the thoroughfares of Africa’s economic powerhouse. Students were joined by anarchical vagrants with a taste for destruction, who escalated the protests by looting and breaking shops and public property and taunting the police. In one afternoon, Braamfontein became a putrid, burning battleground.

Despite the level of violence, Friday night’s iteration ended up being a little more sinister.

Our heels and dinner jackets and iPhones were drawing attention and, increasingly, ire — as we stood by the truck listening to the performance upstairs, not willing to leave the thrill of the action just yet. Like I said, FOMO. This was not a battleground that welcomed the rich, or even the perceived rich. Our press cards did not impress. Our place was inside the club, we were told with more than words, not outside. We did as we were instructed, paid our R200 entrance fee and sat down to listen to some wonderful music.

After three songs the music stopped dead when security came in to tell us all to stay calm and stay inside, allowing a new sound to filter through.

“The truck is burning.”

This time all eyes flicked to the window, now glowing red and filled with sparks and thick, black smoke. The SABC truck broadcasting Ma Khumalo’s performance was torched. The glass doors of the Orbit were smashed and smoke was blowing into the building as the owner, Aymeric Péguillan, attempted to douse the roiling flames.

It was a scene possessed of the kind of irony and juxtaposition South Africa has become so well known for. An SABC truck, burned during the kind of protest ex-CEO Hlaudi Motsoeneng would’ve banned from being shown on national television. A truck that wasn’t even there to broadcast the protest raging around it, despite being the biggest news provider in the country. An attack by disenfranchised youth demanding opportunities, on a live music venue committed to giving young black artists a platform, while the middle class audience inside prayed for them.

As the truck burned and the police chased protesters back up the street and those upstairs began to look for escape routes, Ma Khumalo commanded the attention of the room once more, singing a version of Nkosi Sikelel’ Afrika. God Bless Africa, from which the national anthem is derived.  The audience rose and joined her, placing hands on hearts and bowing their heads, while the unholy fire raged. DM

Main photo of the burning SABC truck by Diana Neille.