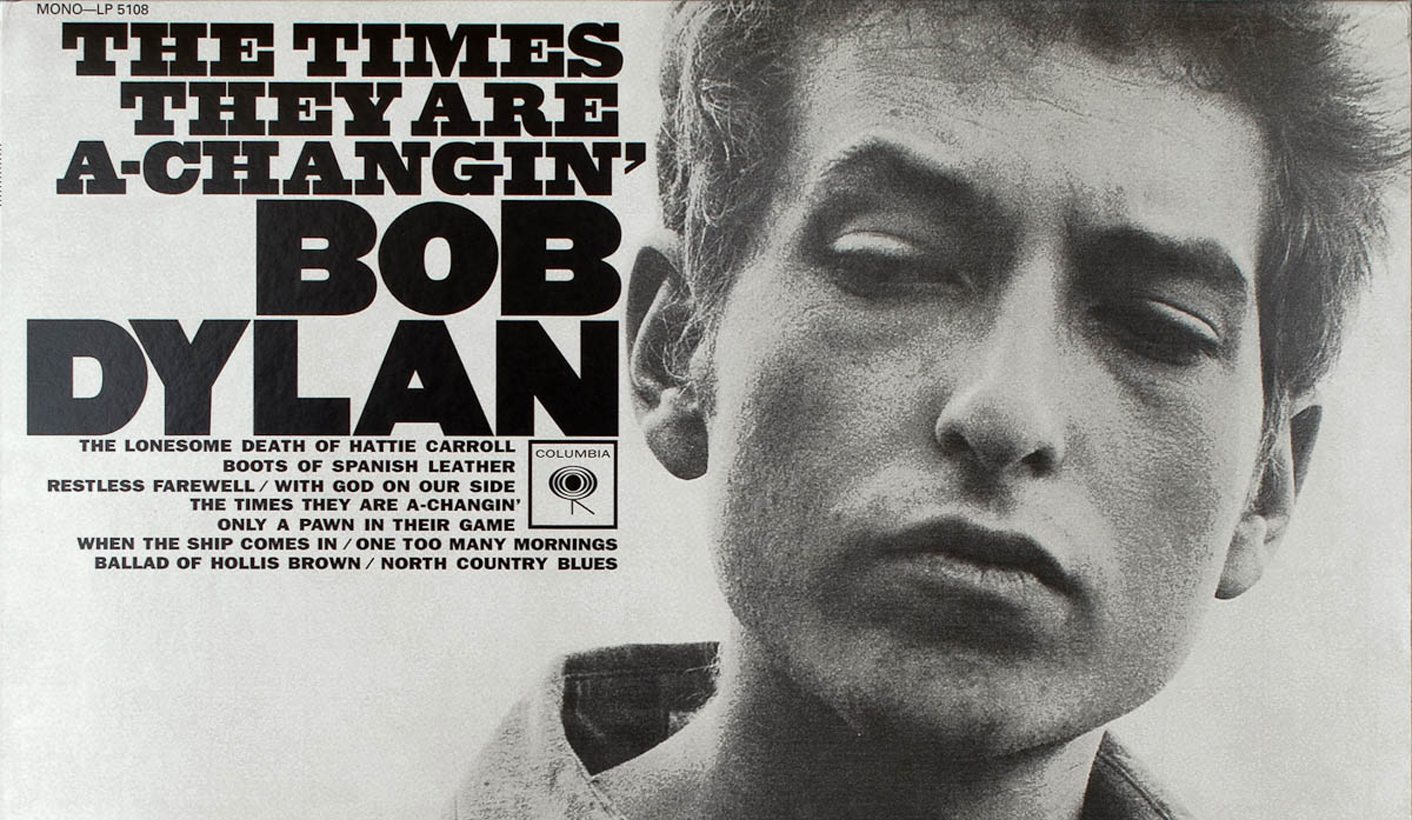 Just when you thought 2016 was looking like the worst year in post-millennial history, Bob Dylan came along and won the Nobel prize in literature. As the man himself sang, “It frightens me, the awful truth of how sweet life can be.” By KEVIN BLOOM

Somewhere inside of us we all know that the artists most qualified to win awards are the artists who covet them least.

The reason we know this is simple: it’s because the true master, the sort of master who gets chosen by posterity as opposed to the sentiments of the age, isn’t in it for the applause. The muse—which is to say the still, small voice of the Great Unknown—doesn’t speak to you if you’re choking on self-regard. How would it get through? Why would it even bother?

Or, as Bob Dylan once said, “Some people feel the rain. Others just get wet.”

And now he’s gone and won the 2016 Nobel prize in literature. For an art-form that’s been gutted by its own self-regarding careerism, an art-form that long ago lost its centre to its own festivals and book tours and awards ceremonies, it couldn’t be more perfect. On hearing the news, the English-writing literati visited their pique upon Twitter. The eminently forgettable Hari Kunzru, deputy director of English PEN, wrote, “This feels like the lamest Nobel win since they gave it to Obama for not being Bush.” Irvine Welsh, famous for producing rock ‘n roll sentences that never actually meant anything, offered, “I’m a Dylan fan, but this is an ill-conceived nostalgia award wrenched from the rancid prostates of senile, gibbering hippies.” And Jodi Picoult, whose 14 million books in print in 2016 should form an impressive mountain of pulp come 2026, expressed what everyone was really feeling when she posted, “I’m happy for Bob Dylan. #ButDoesThisMeanICanWinAGrammy?”

No sweetheart, it doesn’t—but then you were only being funny, weren’t you?

Thing is, what the Nobel committee has just done is delivered another punch to the guts of the cuteness—meaning the hipness, the meretricious-ness, the fake-it-until-you-make-it-ness—of contemporary so-called “literature” in the English language. It’s no coincidence that the last native-born American or Brit to win the award was Harold Pinter back in 2005. The Canadian Alice Munro got it in 2013, and the Rhodesian-educated Doris Lessing in 2007, but other than that it’s been Müllers and Modianos and Tranströmers all the way. In other words, people who make the New York and London publishing sets go, “Who?”

They don’t have a “who” in 2016. What they have is an American whose acceptance speech for the Grammy lifetime achievement award in 1991 included these mercurial words: “Well, my daddy, he didn’t leave me much, you know he was a very simple man, but what he did tell me was this, he did say, son, he said… you know it’s possible to become so defiled in this world that your own father and mother will abandon you and if that happens, God will always believe in your ability to mend your ways.”

In his throttled-up Midwestern drawl, Dylan was paraphrasing none other than the biblical poet King David. Psalm 27:10 is Dylan to a tee—the father and mother that forsake the child, the earthly love that can’t last and so must belong to the realm of illusion, is the single enduring theme that runs through his 50-plus years of laying down lyrics. It’s not a sad thing, a thing to be lamented or feared, it just is what it is. The great ones have been whispering this truth for aeons, some version of Plotinus’s “flight of the alone to the Alone”.

In folk poetry like 1965’s “It’s Alright, Ma (I’m Only Bleeding)”, Dylan whispers it with such gentle panache, such compassionate flair, such necessary humour, that to begrudge him the Nobel is to begrudge the ocean its waves: “You lose yourself, you reappear/ You suddenly find you got nothing to fear/ Alone you stand with nobody near/ When a trembling distant voice, unclear/ Startles your sleeping ears to hear/ That somebody thinks they really found you.”

Who is that “somebody”? Dylan’s genius is that he never tells us. Album after album, year after year, he has kept us—his fans, his critics, maybe even Hari Kunzru—on the hop. The way that can be spoken of is not the eternal way: if anybody knew his Lao Tzu, it was Dylan. We played the songs again, reread the liner notes, picked through the lyrics, all in the hopes of finding… what? Liberation? Freedom?  ““Are birds free from the chains of the skyway?” he asked us in “Ballad in Plain D”.

Which is not to say there weren’t clues, verses that shook us to our core, images that fooled us into believing we’d arrived. Who could ever doubt the treasures at the heart of “Jokerman”? “Well, the Book of Leviticus and Deuteronomy/ The law of the jungle and the sea are your only teachers/ In the smoke of the twilight on a milk-white steed/ Michelangelo indeed could’ve carved out your features”.

But it was always about the truth behind the image, never the image behind the truth—the polar opposite of the meretricious. “I define nothing,” Dylan told us. “Not beauty, not patriotism. I take each thing as it is, without prior rules about what it should be.”

Nope, it never was the sort of literature you could carry home in a Barnes & Noble packet. There were no book tours staged for controversy, no festivals agog with cheap wine. Somewhere along the line, the publicists lost their mailing lists and the professors forgot their lecture notes. Scream it from the rooftops: a musician has won the Nobel!

And man, isn’t it just the best thing to happen in the generally shitty year 2016? DM

Photo: Cover of Dylan’s The times they are a-changin’.