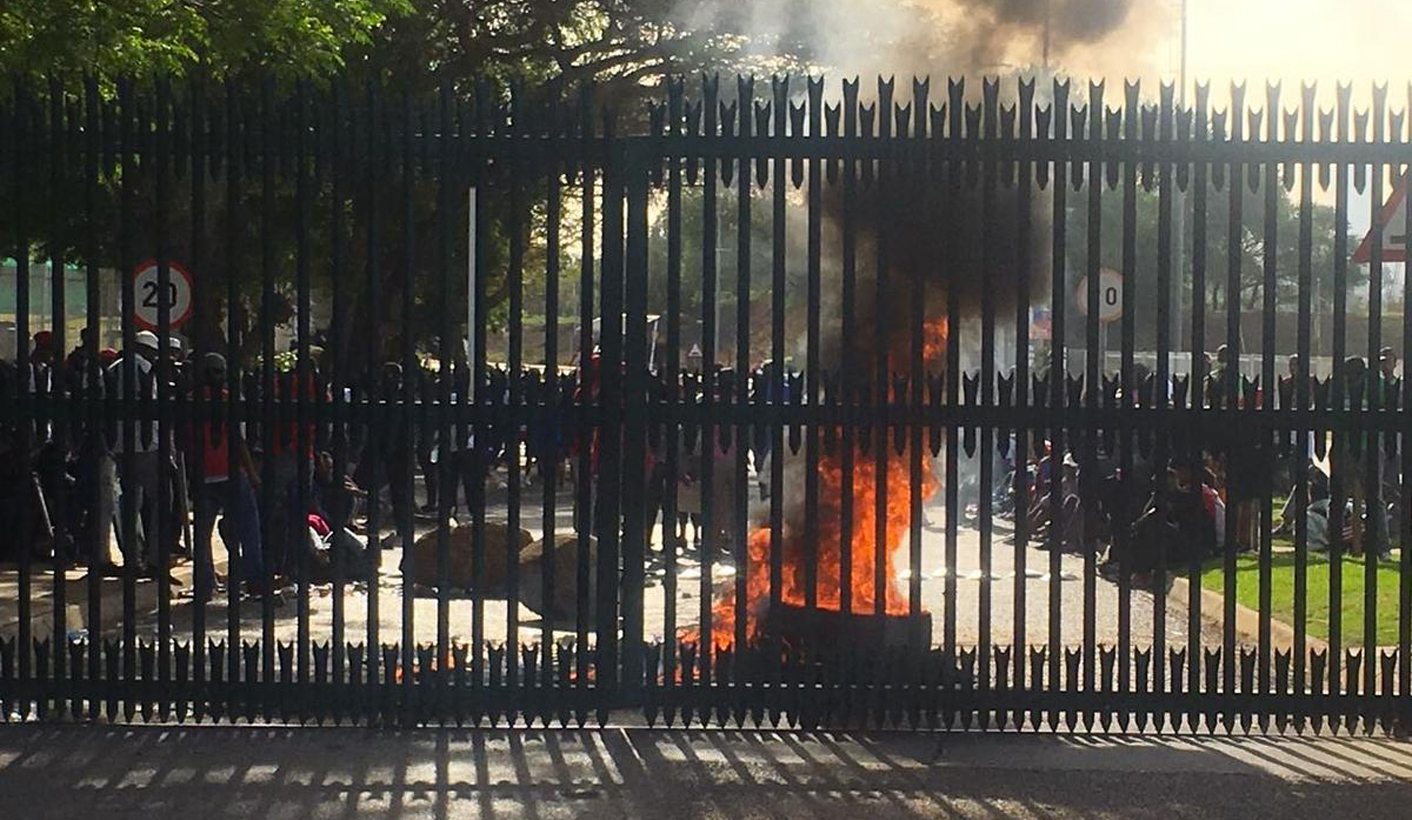 Violence at universities continues to escalate. On Thursday, a private security guard at Tshwane University of Technology was arrested for attempted murder. Protests continue, but students don’t appear to have a co-ordinated plan. By GREG NICOLSON.

A private security guard was arrested on Thursday afternoon for attempted murder after allegedly shooting live ammunition at a Tshwane University of Technology (TUT) student during protests at the varsity’s Pretoria West campus.

SAPS Brigadier Sally de Beer confirmed the arrest. “This afternoon there was an incident where apparently a security guard discharged a shotgun round,” she said.

There were three other guards who saw the incident and the shooter run away after he accidentally fired the shot, she continued. He was arrested later in the afternoon. De Beer said 11 shotguns from private security guards at TUT had been seized for ballistics tests.

As student protests have escalated across the country and stand-offs, sometimes violent, continue, the role of private security guards on campuses has been repeatedly questioned. The president and minister of higher education and training have largely ignored a determined minority of protesting students’ demands for free, quality and decolonised higher education.

While students have struggled to agree on a united strategy to take demands to government, meaning universities remain the primary battlegrounds, police and private security guards have been deployed on campuses. Students have often spoken of the risk of facing live ammunition.

Students at TUT’s main campus claimed they were demonstrating peacefully towards the main gate on Thursday morning before they were surrounded by police and private security who started firing rubber bullets at them. On Wednesday, TUT students shut down much of Pretoria’s CBD, where they engaged in running battles with police. TUT, which shut for two weeks after protests began, reopened this week. Police arrested seven people on Wednesday (as protests were off campus it’s unclear whether they were students) and at least three people on Thursday morning.

“Fees are difficult. When you pay fees you pay in cash. You sacrifice your living,” said a TUT student who didn’t want to be named on Thursday morning. As he was speaking, a TUT guardhouse was burning, after students set it alight, and a police nyala drove by with police shooting rubber bullets. “They say you don’t qualify for the [National Student Financial Aid Scheme], your parents can afford. Parents have their own needs. We sometimes starve. We need free education.”

Around 40 students from TUT’s Arcadia campus tried to march to Pretoria’s Church Square on Thursday. They were stopped by police who said they didn’t have a permit to demonstrate. Modiegi, 19 years old, who didn’t want to share her surname, said, “I feel like we were promised free education since 1994 and a lot of students don’t have an opportunity. This would be a great opportunity for students who are financially excluded but are doing academically very well. Also, I don’t like the police.”

The SAPS have been accused of brutality during the recent Fees Must Fall protests for indiscriminate arrests, intimidating students and journalists, and firing rubber bullets, tear gas and water cannon at peaceful demonstrators and onlookers.

A number of campuses have been “militarised”. Their tactics, however, largely reflect standard public order policing in the country, which leaves a lot to be desired. As yet there are no confirmed reports of police using live ammunition on protesters. That’s also a low base, but considering the ongoing comparisons between Fees Must Fall and Marikana, the intense pressure on cops to crack down on students, the buildings burnt and rocks regularly thrown, worth mentioning.

As Modiegi was speaking, a call came from TUT’s main campus: Someone’s been shot. Onlookers said student Sanele Mathebula was shot in the leg and buttocks with what was described as shotgun pellets. The student was rushed to hospital but the alleged shooter, who allegedly shot the round accidentally and then fled, was able to be identified.

Shortly after the shooting, TUT spokeswoman Willa de Ruyter said she didn’t have information on the types of weapons private security companies were allowed to use on campus. Later she said they don’t normally have weapons and should definitely not have live ammunition. “We need to get to the bottom of what happened and if they were carrying a weapon, why?” she said. De Ruyter said as investigations are ongoing it would be speculative to make a comment on the issues surrounding the arrest of the private security guard. TUT campus protection services are also investigating. She said TUT had hired Fidelity and Nationwide security companies to help handle the protests.

A number of universities have come under scrutiny for employing private security guards. The University of Johannesburg in particular has been criticised for employing “bouncers” over the last year and their recent actions, in particular attacking journalists, after continuous claims from students and staff, forced the university to apologise.

Across the country, the stakes have been raised as the state, universities and protesting students cement their positions. On Friday, there’s talk of a march to the Union Buildings. There’s a planned march to the Chamber of Mines and Johannesburg banks. Students from different campuses don’t appear to yet have found a co-ordinated plan to take the issues to where the models for free education point – national government. DM

Photo: Fires flare up at TUT campus on Wednesday at students barricade gates with burning tyres. (via eNCA)