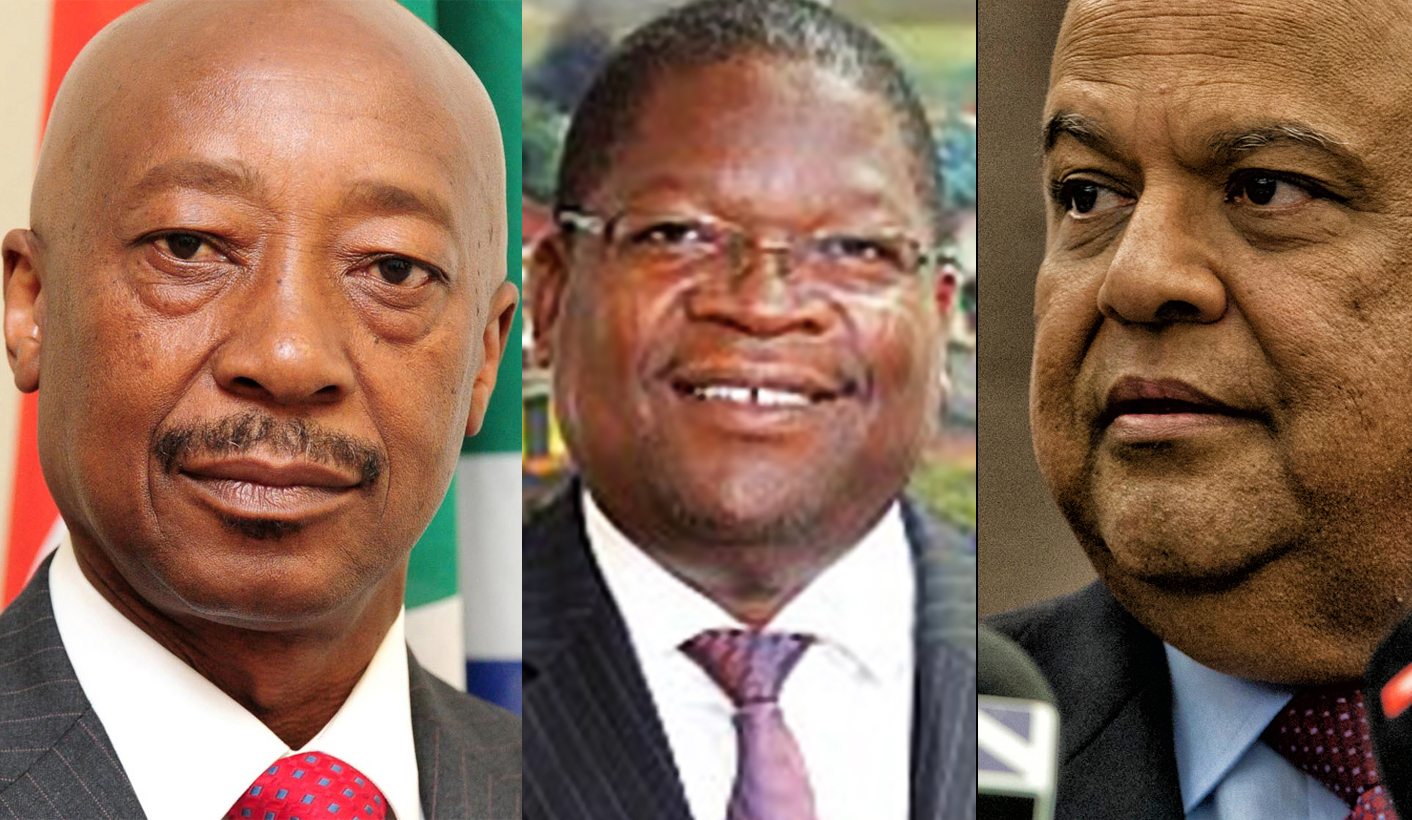 SARS Commissioner Tom Moyane might be guilty of contravening the Financial Intelligence Centre Act (FICA) when he notified the second most senior executive at the revenue service, Jonas Makwakwa, that the FIC had picked up suspicious payments into his personal bank account. Meanwhile, Finance Minster Pravin Gordhan has told Parliament that he found it “perturbing” that Moyane had tried to prevent the matter from being made public and had also allowed Makwakwa to remain in his position dealing with corporate taxpayers while such serious allegations were being investigated. By MARIANNE THAMM.

When SARS and Commissioner Tom Moyane received a report from the Financial Intelligence Centre on May 18 this year flagging suspicious deposits of around R1.2-million into the personal bank account of its second most senior executive, Jonas Makwakwa, he did nothing.

Well, not really nothing.

While the alleged suspicious and potentially criminal activity had not taken place on SARS premises or property, Moyane, instead of alerting the Directorate for Priority Crimes Investigation (DPCI or the Hawks), decided to “afford” Jonas Makwakwa (who was his appointment) and his girlfriend and mother of his children, Kelly-Ann Elskie, “an opportunity to respond to the allegations against them” as part of “the internal investigative process”.

SARS, represented by Moyane, sent replies to specific questions to Gordhan who in turn supplied these to Maynier and Parliament.

SARS added that it had adopted a “two-pronged” approach to the scandal – the first being to alert the suspects (illegally) and the second “engaging the FIC for the purposes of seeking technical guidance, co-operation and assistance in relation to this matter as per Section 4 of the FICA”.

This seeking of technical guidance, it appears, was more of a fishing expedition to determine, according to reports, the identities of the analysts who compiled the report, whether they could provide clearance certificates from state security, and which laws the FIC had used to subpoena video footage from the ATMs and inside banks where Makwakwa made the deposits.

Moyane then blamed the FIC for his tardiness in responding to the serious allegations.

What the law does say is this: Section 29 of the FICA deals with the prohibition of disclosing suspicious and unusual transactions to certain persons, specifically those implicated in such reports.

Section (3) 29 reads: “No person who made or must make a report in terms of this section may disclose that fact or any information regarding the contents of any such report to any other person, including the person in respect of whom the report is or must be made, otherwise than— (a) within the scope of the powers and duties of that person in terms of any legislation; (b) for the purpose of carrying out the provisions of this Act; (c) for the purpose of legal proceedings, including any proceedings before a judge in chambers; or (d) in terms of an order of court.”

Section (4) reads: “No person who knows or suspects that a report has been or is to be made in terms of this section may disclose that knowledge or suspicion or any information regarding the contents or suspected contents of any such report to any other person, including the person in respect of whom the report is or is to be made, otherwise than— (a) within the scope of that person’s powers and duties in terms of any legislation; (b) for the purpose of carrying out the provisions of this Act; (c) for the purpose of legal proceedings, including any proceedings before a judge in chambers; or (d) in terms of an order of court.”

The FIC report handed to Moyane dealt with Makwakwa and Elskie (both SARS employees) and it helps to read the act further in an attempt to understand in just how serious a light Moyane’s breach might be viewed.

Section 53 renders the unauthorised disclosure of such FIC report an offence in that: “(2) Any person referred to in section 29 (4) who discloses a knowledge or suspicion or any information contemplated in that section, otherwise than in the circumstances and for the purposes authorised in that section, is guilty of an offence.”

Section 68 deals with the penalty of unlawfully disclosing such a report which is “imprisonment for a period not exceeding 15 years or to a fine not exceeding R10,000,000.”

Gordhan, replying to Maynier’s questions, opted to make a statement at the end.

It reads: “I only became aware of the issue through the article in the Sunday Times on the 11th September 2016. I immediately contacted Mr Moyane telephonically to report to me the veracity of the report and met with him on the morning of the 12th September 2016 to be briefed on the issue. This was approximately four months after Mr Moyane was first alerted to the matter through a letter dated 17th May 2016 from the Financial Intelligence Centre (“FIC”). This matter is exceptionally serious as the allegations were against one of the most senior managers in the organisation and the official was appointed by Mr Moyane. The report from the FIC stated that there was a total of 75 transactions done between 01st March 2010 and the 31st January 2016 which amounted to R785,130.00 (R726,400.00 of this money was deposited during 2014 and 2015).

“Furthermore, Mr Makwakwa’s partner deposited a total amount of R450,200.00 directly into her personal bank accounts. It is perturbing that considering that the origins of these funds were not confirmed that Mr Moyane allowed Mr Makwakwa to remain in his position dealing with individual and corporate taxpayers.

“It is my opinion that Mr Moyane failed to inform me of the matter possibly in an attempt to resolve the issue without the matter becoming public. Since the report in the newspapers, Mr Moyane has publicly criticised the FIC rather than take the responsibility an accounting officer is expected to assume in dealing with such vital matters. I would like to confirm that to date I have not been informed whether Ms Elskie has been suspended. These and other matters raise serious concerns about the stewardship of a vital fiscal institution.”

In its reply SARS said that it has appointed the firm Hogan Lovells to investigate “this matter and to conduct disciplinary proceedings against the two employees on behalf of SARS”.

And while both Commissioner Moyane as well as the Hawks, through its spokesperson, have denied that the matter had been reported to the Directorate for Priority Crime Investigaion (Daily Maverick has twice asked the Hawks), the SARS reply to Parliament seems to indicate otherwise.

“SARS is aware, based on correspondence received from Directorate of Priority Crime Investigation (“DPCI”) dated 15 September 2016, that the matter has been reported to the (“DPCI”)”.

Daily Maverick is in possession of a docket number, CAS 3/6/2016, which purportedly relates to the Makwakwa investigation and which we learnt was being handed by Colonel Herbert Heap. Brigadier Hangwani Mulaudzi, Hawks spokesperson responded to our question this week, saying, “There is no case and Colonel Herbert Heap is not the Investigative Officer. We still maintain our previous stance. [That it is a SARS internal matter]”.

It is peculiar that SARS told Parliament that the matter has been reported to the Hawks while the Hawks consistently maintain that it has not.

That, dear reader, is the sound of one hand clapping.

SARS said that Mr Makwakwa had since been suspended but that Kelly-Ann Elskie, who is pregnant with his child, was currently on maternity leave.

“SARS is currently in the process of seeking a legal opinion on whether an employer has lawful authority to suspend and/or institute disciplinary proceedings against an employee who is on maternity leave.” DM