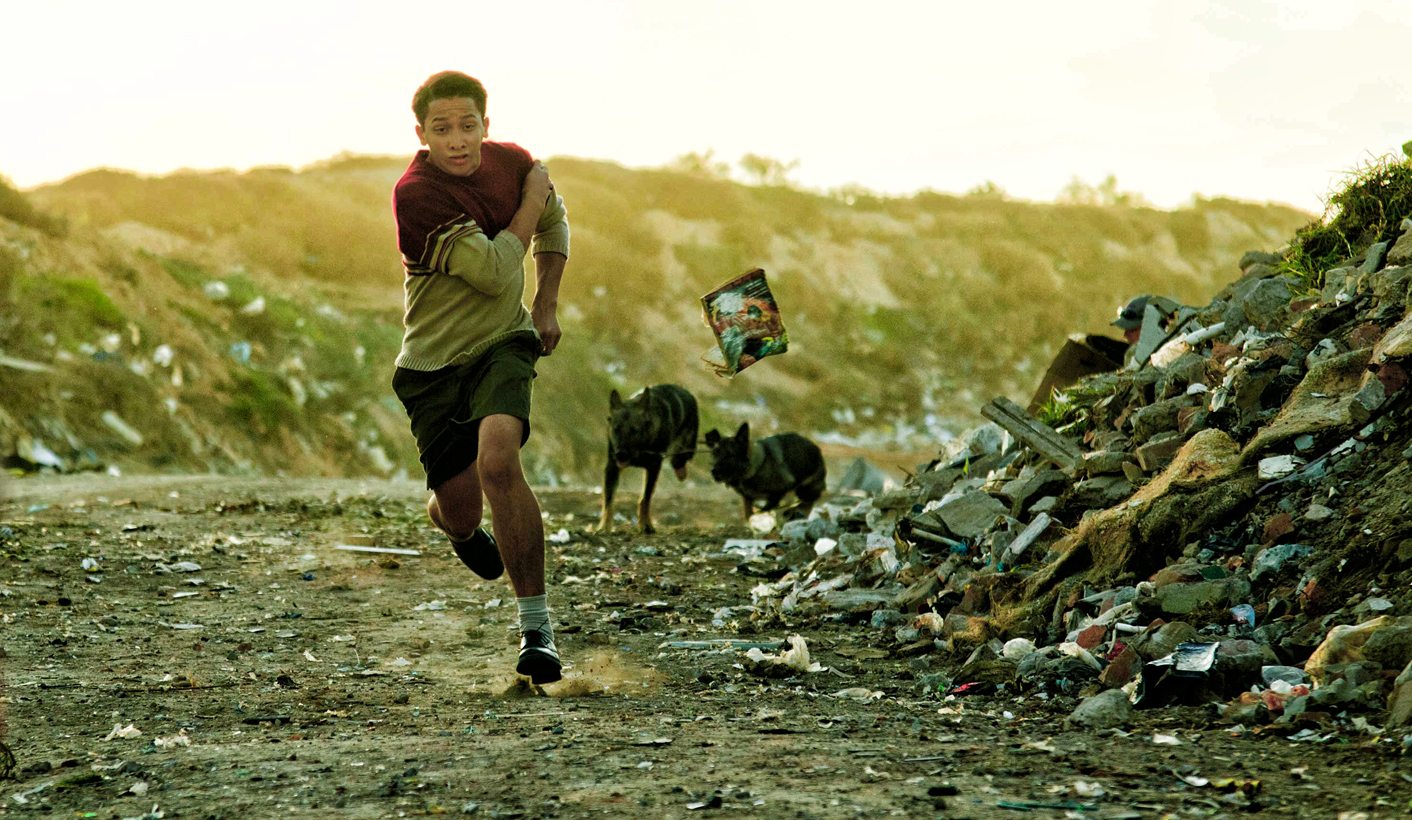 In a week when South Africans might rightly want to stick their heads in an ice bucket in an attempt to wake from the nightmare, one good news story is worth following: shortly after his 71st birthday, local screenwriter John W. Fredericks is still going from strength to strength. If you haven’t yet seen Noem My Skollie, nominated as South Africa’s official selection for Best Foreign Language Film in the 89th Academy Awards, do it before you miss out. MARELISE VAN DER MERWE spoke to the remarkable man behind the movie, based on his life story.

By now you know the story: Wees waaksaam, his mother says to him. Jy’t ‘n calling. Watch yourself. You have a calling. He doesn’t watch himself well enough. He joins a gang – leads one, actually, from a young age. Gets caught as a teenager, goes to an adult prison. It’s late in the day, but he remembers the second part of his mother’s warning, and by some miracle, that calling – as a writer – saves him in the two years he serves behind bars. He peddles the one service he has to give: words. He writes letters, tells stories. By the skin of his teeth, he manages not to join any of the Number prison gangs.

It’s a strange choice of words to say he saved himself. Survival is a matter of perspective when you’re a child in an adult prison.

“It’s difficult to describe how I survived psychologically,” John W. Fredericks says today. “But I became tougher, and more determined to change my life around, and that was not easy, as I had pledged allegiance to a gang. Trouble dogged me for most of my life.”

Allegiance and loyalty come charged with heavy irony in Noem my Skollie. Fredericks’ character, AB, is troubled because of his allegiance to a gang. But he’s also troubled because he’s been betrayed in the most brutal and fundamental of ways by his comrades. It’s a distressing film to watch because it’s so violent. But there’s a deeper and more haunting pain, because it’s so lonely. Daily Maverick asks Fredericks about this.

“I am still a very lonely person, lonely in a crowd,” he says. “Writing is a very lonely road, but I am very good company for myself.”

Writing has been a way to confront the horrors, he says, but also a way to reclaim power over some of the greatest suffering.

“I walk into the belly of the beast, bold with the knowledge that I am making a difference.”

It’s perhaps a strange statement from a man who, today, appears surrounded by love, and who is spending the largest portion of his time trying to change the lives of others. Fredericks has just turned 71. The outpouring of gratitude and respect on his Facebook page is overwhelming. In earlier interviews he has admitted that he never imagined this kind of support. But he’s also said, joyfully, “I manifested this!” He’s talking about Noem my Skollie’s nomination as South Africa’s official selection in the Best Foreign Film category for the Oscars; the lucky charm a perfect replica of the Oscar, which he received at the age of 70, which has pride of place on his desk.

To take the esoteric view doesn’t give the team enough credit. “If you took films such as Shawshank Redemption, Tsotsi and City of God and rolled them into one movie, that would best describe Noem My Skollie,” is how producer David Max Brown explains it. By the end of September 2016, more than 32,000 South Africans had poured into cinemas to see it.

Noem my Skollie isn’t Fredericks’ first successful film. He co-wrote Shooting Bokkie, the 2003 mockumentary about young drug runners, which managed one international award nomination; and in 2000 was further nominated for Best Italian Documentary Film for Hard Living Kids: Tomorrow’s Heroes. He began writing full-time over two decades ago, leaving a steady job partly because telling stories was something he felt compelled to do, and partly because of the social impact he saw a powerful narrative could have.

“I was working as a security guard at Ottery School of Industries, where there was a lot of youth at risk, and I could share my wisdom of gang life with them,” he explains. “Then I was asked to go and speak with sentenced and awaiting-trial prisoners in Pollsmoor Prison. When I entered that courtyard that day, and saw all those kids in prison, I could identify with them. I felt this stirring in my being.” He decided to give up his day job and try to make a difference in their lives.

Noem My Skollie took years to write. Asked how it evolved over time, Fredericks is reticent. He was working on a number of other projects as well, he points out; he completed a number of documentaries as well as an NFVF/Sediba screenwriting course. Nonetheless, getting it all out was a difficult process. “It was a very painful story to tell,” he says. “As I was writing, a lot of ugly things surfaced in my mind that I had buried deep in my consciousness, and many a time I found myself in tears as I rolled back the curtain of memories.”

It’s little wonder. The film pulls no punches. Torture, brutal rapes and rapid gunfire are staples. But the dismissal of human life isn’t just about death. It’s the way life is lived.

“The reality of the coloured people is gangsterism, violence and poverty,” Fredericks said in an earlier interview. “There’s no way to erase this from the stories we tell. When we’ve told all of those stories, we can start telling the story of a new nation, a new people.”

From childhood, the boys are cast aside. Their humanity doesn’t feature, not for the apartheid government and not for many of the adults around them, who are also just trying to survive. Fredericks, whose father is sometimes dismissive and sometimes protective of his son’s dreams, grows up beside a rubbish dump. It’s here – literally and figuratively – that his great love of literature begins.

“My father was a dustman, and I spent most of my early life on the refuse dump that was situated behind our house, and where I scavenged for books to read,” he says. “Reading opened my mind and I had this yearning to write and tell stories.”

This is not a gang film, Fredericks stresses. “It’s a film about childhood friendship and about loss in adversity. It tells a story of how everyone has a natural gift but how some gifts are harder to find than others. It’s the story of my life.” And maybe that’s why, unlike many other films that depict gangs, it has the ring of human truth, neither glamourising nor flinching when that truth is ugly. From the first scene, Fredericks debunks the glorification of violence and suffering, describing in excruciating detail the humiliation of being hanged. There is no victory, he makes it clear, in living fast and dying young.

“I cried so much during the writing of this story,” he says, “that I just knew others will be moved.”

Fredericks has the mark of all great storytellers: his stories have enough power, and enough compassion, that they do not need excessive dressing. He is straight up and down, narrating without ego; he levels with you. It’s this directness that makes his stories so compelling.

Today, he has a book deal on the table, as well as a few other scripts in the pipeline. Having taught creative writing to offenders in the past, he is now focusing on freelancing at places of safety, in schools, and in the townships of ganglands. It’s important to add that Noem My Skollie is a story of hope, he stresses.

“In saying that, I’ve had a lot of success with people who have changed their lives around and become meaningful citizens with high-paid jobs who are now paying it forward,” he says. If the brief thank-you message left by one friend on his Facebook page is anything to go by, it’s true, and he has plenty of work to do yet. “I feel so inspired by this man,” it reads. “As an ex criminal gangster myself, he inspired me.

“If he can do it then all Cape Flats ex criminals can do it. God bless u, Mr John W. Fredericks. U inspire me, the prodigal son.” DM

NB Photos are stills from the film. Noem My Skollie was produced by David Max Brown and Moshidi Motshegwa (Maxi-D Productions) in association with M-Net, kykNET the NFVF and the DTI, and distributed by Ster Kinekor Entertainment. It is directed by Daryne Joshua. Twitter: @noemmyskollie