Op-Ed: I will never forget Khwezi 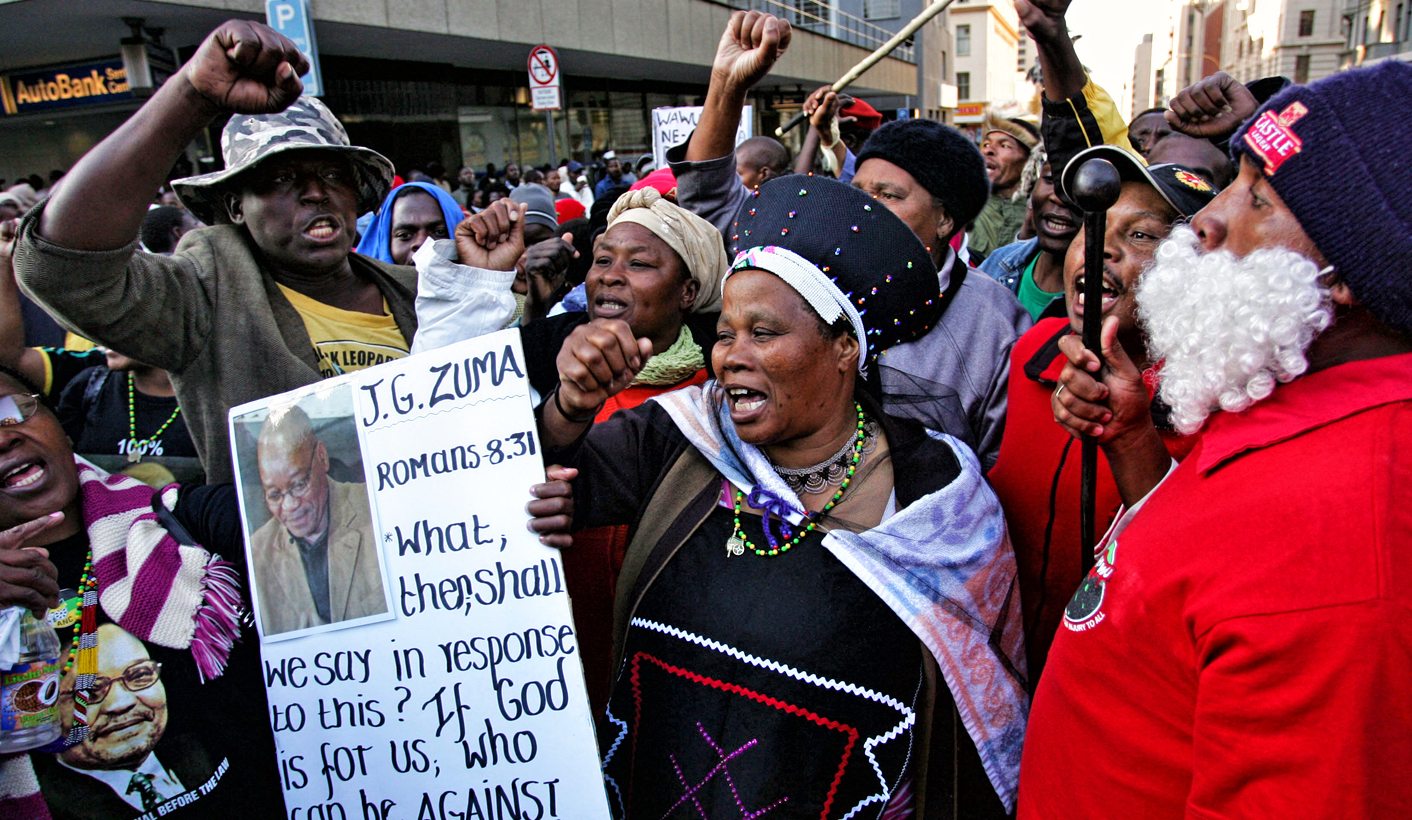 On Sunday the family of Fezikile Kuzwayo confirmed that she had died, at the age of 41. She did not have an easy life. It was made hard not just through the acts of the apartheid government, but through the men she met who abused her. Only one of those incidents resulted in a trial. And in that trial, the man who is now President Jacob Zuma was found to be innocent. It left a mark on her, on Zuma, and on us as a country. It also made a profound impression on STEPHEN GROOTES, who covered the trial for 702 Eyewitness News.

There is something gut-wrenchingly awful about watching a rape trial. It creates a twisting and a turning, a cold nausea that worms its way around you, and sits in the pit of your stomach. Even if the people are completely unknown to you, the descriptions, the mess of it, the irrationality and the combination of those two most ancient of human behaviours, lust and violence, is something possessing an awful power.

It is the details that are so disturbing, the nudges and winks before, the noncommittal shrugs that really mean “no”, the refusal to accept it, the colours of the sheets, the use of the word “penetration” and then the awful questions about how long it took for the victim to realise what had happened.

And for a reporter, one of the most difficult aspects about a rape trial involving politics is that then, as now, almost every aspect is contested. Is the person who was attacked a “rape victim” or a “rape survivor”? What if she feels she is a victim at one point and a survivor at another? And if you use either during a trial are you not immediately ascribing guilt to the accused? Is it “penetration”, or “sex”, or “intercourse”, or “sleep with”? There are a million ways to describe the sexual act, but none of them adequately describes an act in which a man’s penis enters a woman’s vagina in a circumstance in which it is not known if the woman gave permission.

And then, throw politics into the mix, the politics of race and gender and culture and power. It was an incredibly heady, toxic brew. A brew that intoxicated the nation for months.

It left us all scarred and embittered, somehow soiled and dirty.

I didn’t really know Jacob Zuma when his rape trial started; all I knew about him had come through the unfortunate prism of the Schabir Shaik trial. Famously, Zuma was on trial in that case almost as much as Shaik. And of course, I knew next to nothing about Fezekile Ntsukela Kuzwayo. Even her name is now contested. Should I call her Kuzwayo, in a bid to humanise her, to acknowledge that she was more than just a victim or a survivor or the “woman who accused Zuma of rape”? Or should it be the more familiar, more personal, but perhaps disrespectful “Fezekile”? In the case, I made sure not to write down her real name. I was worried that under pressure on air I might one day just drop it into a live report, and the best way to make sure that did not happen was to simply not know the name at all.

There are many aspects to the trial that people have forgotten now. The headline of course is that Zuma was acquitted. If you spend any more time on Google, you will probably come across what the judge actually said about Zuma and his behaviour, that “and if you can control your body and your sexual urges, then you are a man, my son”.

But how exactly Zuma was acquitted is no longer much discussed.

From the start, he appeared to lie about it. His attorney, Michael Hulley, went on to Cape Talk and appeared to suggest that there had been “no incident” which could give rise to the claim of rape against Zuma. That contradicted evidence that was given later.

Before the trial even started, a senior judge, then a Deputy Judge President of the South Gauteng High Court, Judge Jeremiah Shongwe, had to recuse himself from the case. This was not because he knew of anything about the details, but because he knew everything there was to know about Zuma. His sister had had a child by him. Two years ago, Shongwe was appointed – yes, by Zuma – to the position of chair of the Electoral Court.

Just to be clear, the person who could have to decide who wins the elections in 2019 is the uncle of one of Zuma’s children. And that fact was kept hidden from us until it suited Zuma to have him recuse himself.

Then, once the trial started, it was immediately clear what course Zuma’s legal team was going to take. They were going to smear Kuzwayo. In his plea explanation, read out in open court on the first day, Advocate Kemp J. Kemp said that one of their defences was going to be that the accuser had made claims of rape before. For the second half of the trial, man after man came to testify on this aspect. It was awful to watch. Particularly because their stories were undeniably true. No matter what one thinks of Zuma’s behaviour, this was a problem for the prosecution, and it was virtually impossible for them to surmount it.

But it was still awful to watch. Awful to watch a person in such a vulnerable position being ripped apart like that.

Of course, the verdict, when it came, was hugely contentious, and endlessly discussed. Zuma was innocent. In the eyes of the law. But the law and sex are a terrible mixture. The law is precise, it uses hard, strictly defined words. Sex is messy, chaotic, difficult. The one thing that stays with me from that time is the realisation of this. From then on I have always thought that actually the whole way the law approaches rape is wrong. If two people have sex in a glass room, and a hundred people watch them, you will probably have a hundred different views on what actually happened; whether it was completely consensual or not. Sex is grey, the law insists on black and white. And it insists on this because you are either guilty or not guilty, free or sent to jail for 15 years.

This should change. It must change. It must change because the low rate of convictions for rape is directly ascribable to this. We need to think again about how we manage it. And we need to start from scratch, we need to change approach. We need to consider findings that range from “he took advantage” to “he took advantage with aggravating circumstances” all the way to “proper forcible rape”. It will be a difficult process and judges should maybe have more leeway in these cases than in others, precisely because the circumstances can vary so much.

But something that must not be forgotten is what all of this taught us about President Jacob Zuma.

Kuzwayo was an incredibly vulnerable woman. She knew Zuma well, she testified about how she “felt like one of the family”. Her father had been in the same prison cell as Zuma on Robben Island. And now, he had done perhaps the worst thing a man can do to a person he called his “comrade”.

Sure, she was old enough, under the law, to say “no”, to object, to try to stop it. But we all know that is not how sexual attacks work; what seems objective and rational in a courtroom does not at all describe the horror of it.

A couple of days after the trial, Zuma held a press conference. He used it to “apologise” for his behaviour. It was the start of his campaign to take over the ANC the following year.

But there has been nothing at all in his behaviour since then to suggest that he was at all sorry, that he even accepted that he had misbehaved. The simple fact is, he did it again. He had intercourse, this time resulting in a baby, with Sonono Khoza. Who is the daughter of Irvin Khoza. Again, a woman much younger than him. Again, bringing embarrassment and shame to his party. This time it was worse. He was not just a “former deputy president”. This time he was the president, the head of state, the person that is supposed to symbolise the nation.

Zuma’s behaviour during his rape trial has infected us all. It intoxicated the ANC Women’s League, which has never recovered its legitimacy since turning its back on a young vulnerable woman and backing a strong powerful man. The ANC itself appears to have inhaled the poison. Why should we have expected anything different? DM