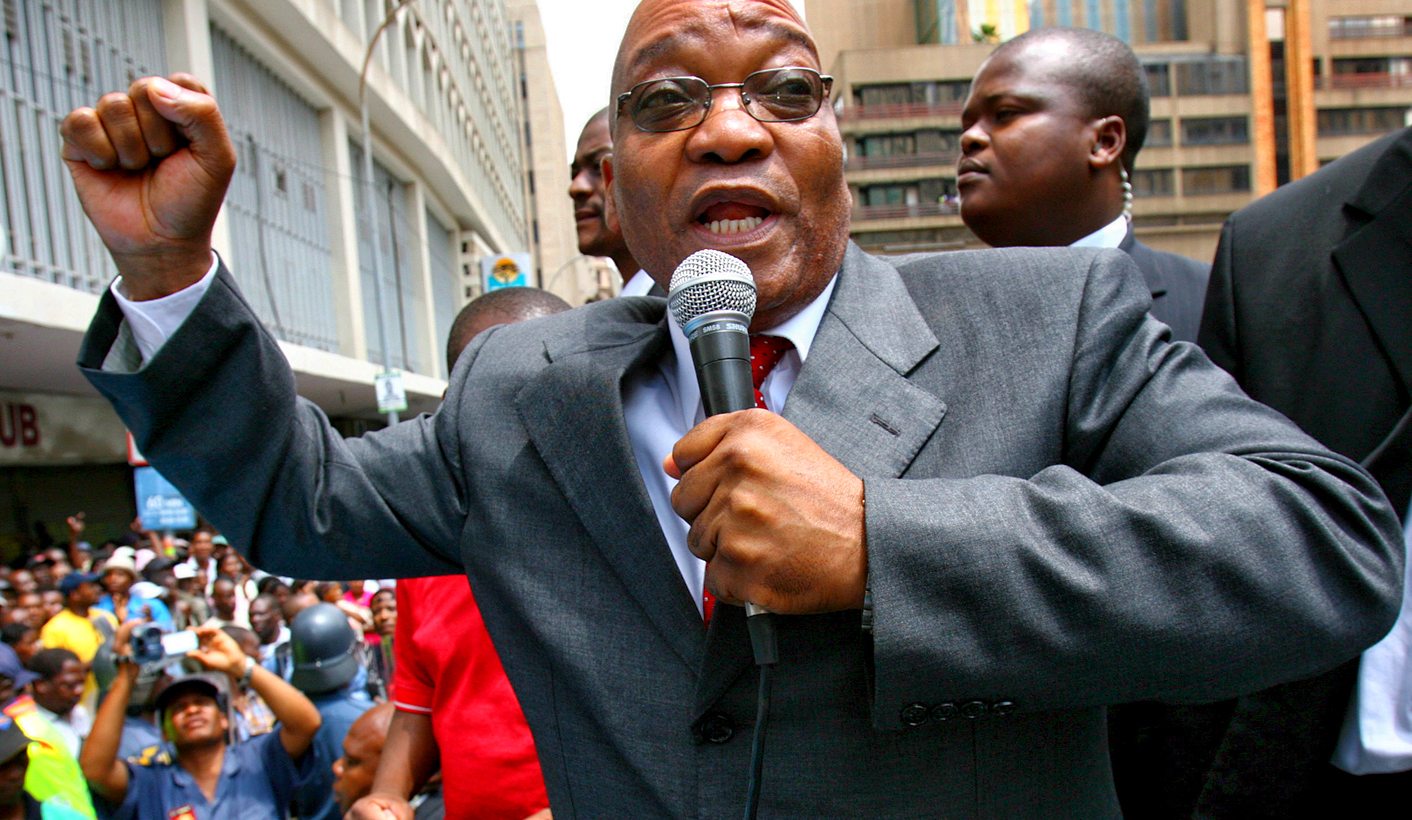 On a day of violence on several university campuses, mayhem on the streets of Johannesburg and a Catholic priest being shot in the mouth by police, President Jacob Zuma was hard at work – looking for a way to wriggle out answering the Public Protector’s questions on state capture. As the fees crisis spirals out of control and the police are left to deal with the situation, the president remains dispassionate and preoccupied with the new investigation against him. Outgoing Public Protector Thuli Madonsela wants Zuma to answer questions about the activities of his friends, the Guptas. Zuma first wants to know who gave her evidence and what they said. By RANJENI MUNUSAMY.

If ever there was a day when statements needed to be issued by the Presidency it was Monday, October 10, 2016. There should have been a statement from President Jacob Zuma acknowledging the passing of Fezeka Ntsukela Kuzwayo. She was the daughter of his friend and comrade, and therefore part of the ANC family. Because of him, she suffered greatly. Whatever his version of events that day in November 2005, as an ANC elder, a friend of her father and as president, Zuma should have paid tribute to her and offered condolences to her grieving mother.

But this is Jacob Zuma. Acknowledging the women who lost her identity and her life to become “Khwezi”, his faceless “rape accuser”, would be an acknowledgement of his wrongdoing. It would be doing what the four young women who engaged in a silent protest at the Independent Electoral Commission’s elections results ceremony wanted him to do:

So the life of Fezeka Kuzwayo will have to be relegated to the litany of issues Zuma would rather not talk about.

The deepening crisis in higher education is another issue that warranted a statement from the president. Scenes of unprecedented violence played out at a number of campuses in the country on Monday, with clashes between police and students at Wits University spilling onto the streets of Braamfontein. Streets were blocked off as police pursued students who had pelted them with rocks. Catholic priest Graham Pugin was shot in the mouth by a rubber bullet as he stood at the entrance of Holy Trinity Catholic Church to protect students who had sought refuge on the property. Many people were hurt in a day of skirmishes, a bus was burnt and shops looted.

You would think this would prompt the president of country to speak up and try to restore order. But the higher education crisis seems to be another issue Zuma would rather avoid. To assume the role of head of the South African government and participate in negotiations with the universities and students would mean acknowledging the expectations of free education the ANC created and failed to act on. It would also possibly mean having to face accusations about the misuse of state funds on his bloated Cabinet and his private home rather than critical needs such as education.

A statement did arrive, however, from the Presidency at 4:58pm on Monday regarding the Public Protector’s probe into state capture by the Gupta family. It said Zuma had written to Madonsela requesting that she allow him or his legal representative to question witnesses who gave her evidence.

“The President has submitted that in adherence to the audi alteram partem rule, he as an implicated person is entitled to the documents and records gathered in the course of the investigation, to enable him to prepare his evidence. The President is also entitled to question witnesses, assisted by a legal representative,” the statement said.

How would that go exactly – the President of the Republic of South Africa questioning witnesses? Would he and his lawyer do a “good cop, bad cop” routine? Would he summon whistle-blowers against corruption infesting the state to the seat of government, the Union Buildings, and demand to know what they told Madonsela? Would he ask his friends, the Guptas, to join him in interrogating the witnesses? It would not be the first time they were let in on affairs concerning the state.

The statement also laid out Zuma’s grievances with Madonsela’s investigation.

“President Zuma was given two days before the meeting that took place on Thursday, 06 October 2016, to prepare and to give evidence on a whole range of matters which exceeded the ambit of the stated request for the meeting.”

Zuma complained that the purpose of the meeting with Madonsela “changed from a briefing session as earlier envisaged”. He therefore asked that the meeting be postponed so that he can be provided with the relevant documents and records and where necessary be allowed to question the witnesses who have already testified before the public protector.

But, Zuma is not happy to answer the questions.

“After careful consideration, President Zuma is still of the view that he must be provided with the list of witnesses who appeared before the Public Protector, statements and/or affidavits as well as transcripts of any oral testimony tendered in this investigation. Furthermore, the President would want to exercise his right to question some of the witnesses before responding to the written questions and adducing evidence.”

He is also objecting to Madonsela rushing the investigation so that she can release a preliminary report before she leaves office on Friday.

“The Presidency deems the Public Protector’s statement at the said meeting that she was in a ‘hurry’ to complete the investigation as ill-founded.”

So Zuma wants Madonsela to give him an undertaking by close of business on Tuesday that she will not conclude her investigation or issue any report until he gets all evidence implicating him, can question the witnesses and “has been afforded a proper opportunity to tender his evidence”.

That “tendering of evidence” could obviously take months, by which time Madonsela would long be out of his hair and the new Public Protector Busisiwe Mkhwebane would be focusing on her “priority” issues.

But Madonsela is not willing to go quietly. She disputes that Zuma was given short notice to provide her with evidence. “The Public Protector would like to report that President Jacob Zuma was afforded a proper opportunity to tender his evidence since 22 March 2016,” Madonsela’s office said on Monday night.

The Public Protector’s office also released copies of letters sent to the president in March and April, informing him that complaints had been received from the Democratic Alliance about his alleged breach of the Executive Members Ethics Act and requesting information from him relating to the Guptas. And on Saturday, October 01, Zuma was given “all copies of evidence implicating him”, the Public Protector’s statement said.

With just a few days to go before her term expires, Madonsela also appears to have reached her tolerance threshold for stalling tactics and non-cooperation from Zuma.

“It is of concern to the Public Protector that the President has on two occasions undertaken to answer questions and when the time arose, he changed his mind.”

“The Public Protector genuinely believes it is in the interests of the President to account for what he knows regarding the allegations which the Public Protector already forwarded to him in March 2016. She also believes it is in the interest of public trust that the matter be concluded expeditiously. She accordingly appeals to the President to assist with any information he has that can assist the investigation, primarily, by answering the questions put to him.”

But President Zuma is a busy man, apparently. “The President’s diary, as was explained at the said meeting, is determined well in advance and therefore the truncated period simply does not permit him to properly attend to the matter,” the Presidency statement said.

Zuma will be on a state visit to Kenya on Tuesday and Wednesday and then jets off to Goa, India later in the week for the BRICS Summit that begins on Saturday.

Whether he will find time in between to answer Madonsela’s questions on his relationship with the Guptas, attend to the crisis in higher education or pay tribute to the woman he knew from when she was a child, and who lived and died tragically, remains to be seen. They are all seemingly inconsequential to the man who leads our nation. DM

Photo: Jacob Zuma sings his signature tune ‘Lethu Mshini Wami’ (Give me my gun) as he addresses a crowd of supporters outside the Johannesburg High Court in Johannesburg, South Africa, Tuesday 14 February 2006. EPA/JON HRUSA.