Holy Shield: #FeesMustFall priest tells of his day of terror 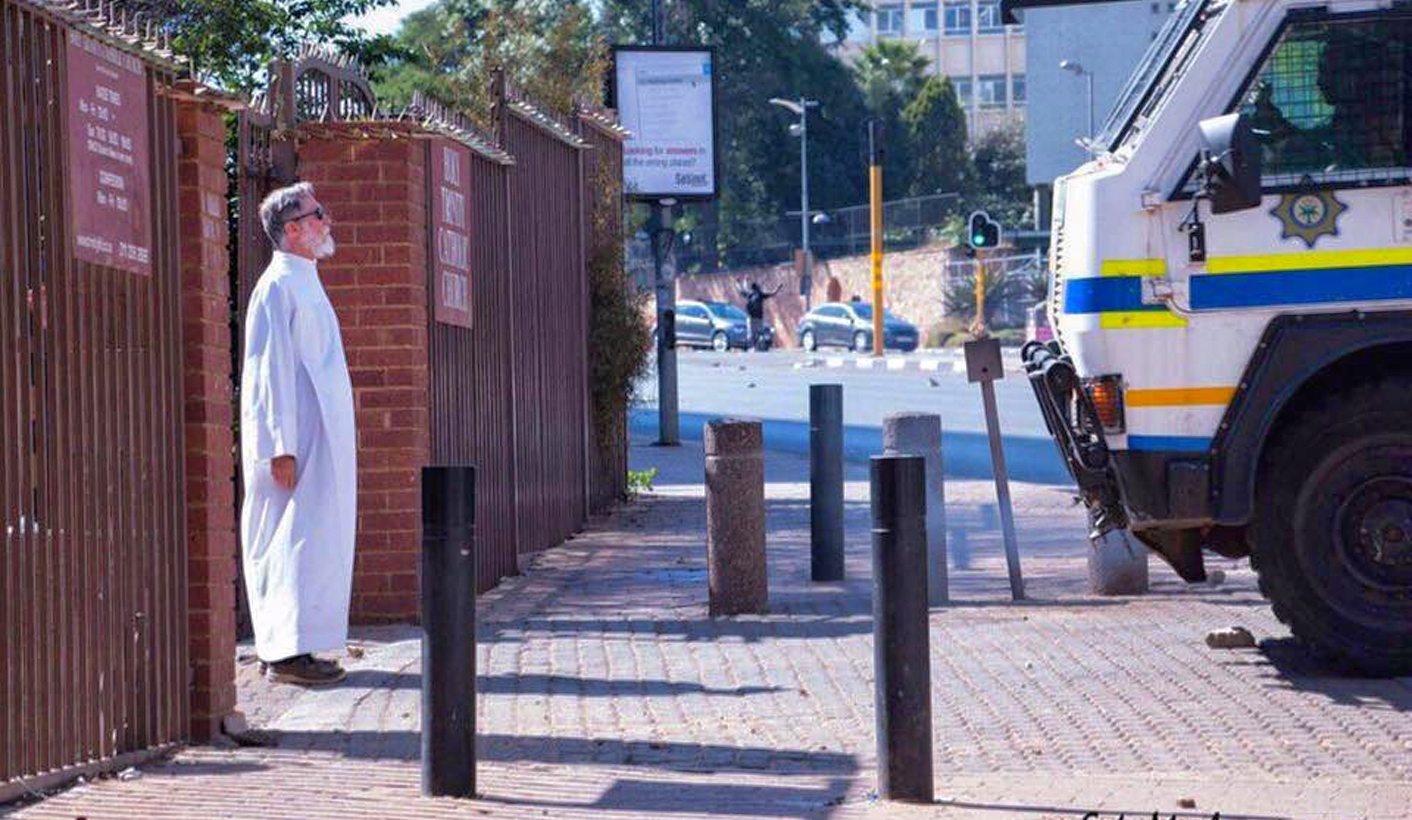 Images of Catholic priest Father Graham Pugin in front of a police nyala and bleeding after being shot in the face went around the world on Monday night as South Africa’s university fees crisis worsened. Pugin was hit as he stood as a human shield between the church, where students sought refuge, and riot police. The images sent shock waves across the country and prompted alarm from Pope Francis’s emissary in South Africa and the Jesuit General Congregation currently meeting in Rome. The police have apologised “unconditionally” and have instituted an official investigation into the matter. Pugin spoke to RANJENI MUNUSAMY about his face-off with the police and being shot in the leg earlier in the day.

This is not the first time Father Graham Pugin stood up to state power. He was one of the first conscientious objectors and in 1979, was court marshalled for refusing conscription. His religious order, the Society of Jesus, also has a reputation for troublemaking – sometimes known as the Pope’s “storm troopers”. In 1987, another member of the order, Father Gerry Lorriman confronted military vehicles at a funeral in a Cape Town township. The security forces had fired teargas at the funeral procession causing the pallbearers to abandon the coffins. The image of Lorriman facing the armoured tanks ran in newspapers around the world as a symbol of popular resistance against the apartheid state.

But until he was shot on Monday, for reasons that are yet unclear, Pugin had a relatively cordial relationship with the South African Police Service. Earlier in the day he had been instructed by the police to lock the gate between the Wits University campus and the Holy Trinity Catholic Church where he is parish priest. He refused to do, wanting students fleeing from clashes with police on campus to have a route to safety at the church.

“When I refused to promise to keep it locked, they took my name,” Pugin told Daily Maverick after being attended to by a maxillofacial surgeon on Tuesday morning. Later the police returned and locked the gate with their own padlock and posted three officers to stand guard. During the day of high drama, with students intermittently running into the church property to seek cover from the hail of rubber bullets, Pugin found time to carry cups of water to the police officers standing guard.

Pugin and other members of the clergy and civil society have been facilitating talks between the students and university management over the past two weeks as the higher education crisis flared up. The church has served as a neutral venue for negotiations, as well as a sanctuary during episodes of violence in the last fortnight. Pugin has a soft spot for the students but also an edge. There are media pictures of him wagging his finger at protesting students carrying makeshift weapons.

“I insisted they weren’t allowed on the church property with weapons. I told then to put down any sticks and stones before coming in.”

During Monday’s running battles, there was much pushing and jostling, Pugin says, but the students were never aggressive.

But a police nyala patrolling the streets of Braamfontein became fixated with the comings and goings at the church property. The armoured vehicle drove up and down Bertha Street, in front of the church’s main gate, firing rubber bullets indiscriminately.

It was then that Pugin took up his post at the gate, while the students scampered around the churchyard. At one point, as police fired into the property, a rubber bullet hit him in the leg. His ankle-length white vestment protected him from injury.

But the officers in the nyala were not done. Video footage taken from a building adjacent to the church shows the armoured vehicle driving at high speed down Stiemens Street to stop dead a few metres from Pugin. The moment was captured by community photographer Edward Molopi.

“I didn’t move or say anything to them. I didn’t hear them say anything. What I did was make the sign of the cross to bless them,” says Pugin.

Why didn’t he just move away or lock the gates?

“I had no intention of moving!” Pugin says furiously. “They were not going to come onto a church property with an armoured vehicle. I dedicated my life to opposing violence.”

The officers in the nyala seemingly thought this to be an act of provocation. The vehicle reversed and left and students rushed up to the priest to thank him for protecting them.

“Some of them even took selfies with me,” says Pugin, his grin half visible behind plaster covering his stitched lip.

When the vehicle drove slowly past again shooting into the church property, a rubber bullet struck Pugin in the mouth.

“I knew I had been hit in the face. I could feel the lacerations in my lips. I was trying to work out if I had any teeth left.”

He was bustled into the church office by the students, some of them screaming hysterically at the image of his snow-white vestments spattered with his blood. Pugin was treated by paramedics before being taken to the Charlotte Maxeke Academic Hospital where he had to wait in a queue for treatment.

“There happened to be a plastic surgeon who was on duty and he worked on my lip. They suspected that there might have been damage to my teeth but fortunately there was not,” says Pugin. A piece of his lip that was torn by the impact of the bullet had to be cut off.

On Tuesday, a police delegation led by Deputy National Commissioner Gary Kruser visited Pugin at the home of the Jesuit Fathers in Auckland Park to “apologise unconditionally for what happened”. After meeting with Pugin, Kruser told Daily Maverick that he had instituted an official investigation into the incident, which is to be led by the Gauteng provincial commissioner. He said there had been no command to shoot Pugin and he himself had been calling for religious leaders to intervene to defuse the situation.

“I can’t speak on the merits of the case while it is under investigation. We have a responsibility to ensure there is no loss of life. The police are under a lot of pressure and the levels of violence are high,” Kruser said. He said provocation and criminal elements were exacerbating the situation.

Photo: Father Graham Pugin with his pup Doglet who had to be rescued from the church on Monday night after police cordoned off the area. Picture by Russell Pollitt.

Pugin’s order, the Society of Jesus, is still considering possible legal action against the police. But they said in a statement that they were willing to continue facilitating negotiations at Wits and participate in national mediations to resolve the fees crisis.

“The shooting of Fr Graham has shocked and distressed many people, including students. We believe there needs to be a national mediation effort to resolve the fees issue and stabilise the situation on campuses. We note the establishment of a national government task team on the fees crisis but believe that this alone will not deal with the problem. We believe there needs to be a concerted effort, involving all sectors of society, to deal with the historical context and systemic problems which make higher education inaccessible and unaffordable for millions of poor South Africans,” the Jesuits said.

Despite being badly shaken by the incident, Pugin is eager to return to his post at the church.

“I want to get back as fast as is best. I don’t want to go in if I’m going to cause provocation,” he said. And he wants his church to continue to be a “safe and sacred” space – as it should be. DM

Main photo: Father Graham Pugin facing off with a police nyala at the gates of Holy Trinity Catholic Church in Braamfontein on Monday. Picture by Edward Molopi.