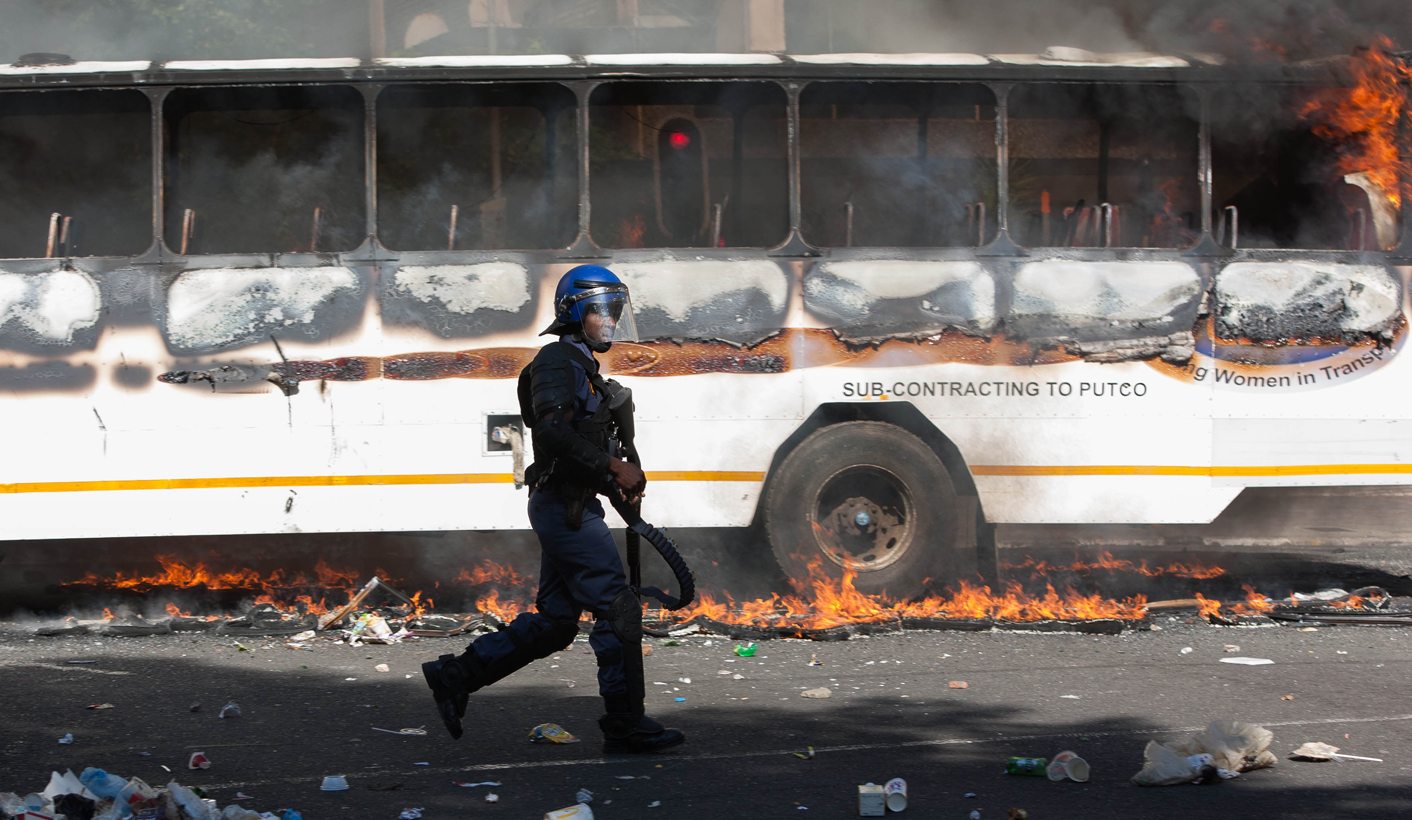 Rocks were thrown at a police Nyala, a protester danced on the roof of a burnt bus, and even street kids joined in as students protests at Wits left the campus and shifted to Braamfontein. By GREG NICOLSON.

Photo: Students marched in the streets of Braamfontein after protesters were forced off campus. (Greg Nicolson)

Photo: In an attempt to return to campus, some students tried to break the lock separating the university from a church next door. (Greg Nicolson)

Photo: Some students attacked a man in the crowd as they protested in Braamfontein. He was eventually saved by other students. (Greg Nicolson)

Photo: A student throws a rock at police in Braamfontein as they moved in to try to quell protests. (Greg Nicolson)

Photo: Protesters, which now included students from different campuses, onlookers who got involved, and street kids from the area, stoned a bus in Braamfontein on Monday before parking it in the middle of an intersection. (Greg Nicolson)

Photo: Protesters sing over a fire they lit in the streets of Braamfontein near Wits on Monday. (Greg Nicolson)

Photo: After students clashed with security and police at Wits, SAPS officers on Monday cracked down on any students on campus suspected of protesting. (Greg Nicolson)

Photo: Police arrested a number of protesters on Monday. This student was caught and then kicked by a police officer. SAPS officers then tried to intimidate nearby journalists. (Greg Nicolson)

Photo: Protesters in Braamfontein used the cement and stone rubbish bins as barricades as they closed down a number of blocks. (Greg Nicolson)

Photo: One of the Wits student leaders, Busisiwe Seabe, tried to approach police to discuss the ongoing fights but was told to turn back. (Greg Nicolson)

Photo: Protesters throw rocks at a police nyala after it shot rubber bullets at them. (Greg Nicolson)

Photo: After a bus was attacked, one protester danced on its roof, sticking his middle finger up at police. (Greg Nicolson)

Photo: SAPS repeatedly moved into protest areas in Braamfontein, shooting rubber bullets and arresting some people. A group cowered while a journalist showed her media card for protection. (Greg Nicolson)

Photo: As police moved in to quell protests or prevent damage to property, protesters moved to different intersections in Braamfontein. Students sang struggle songs from the windows of their residences. (Greg Nicolson)

Photo: A police officer shoots rubber bullets at protesters outside a Puma store, which protesters had thrown rocks at. (Greg Nicolson)

Main photo: A police officer walks past the burnt bus after SAPS cleared the area and protesters moved to another intersection. Before the bus was set alight some people stole its two batteries. (Greg Nicolson)