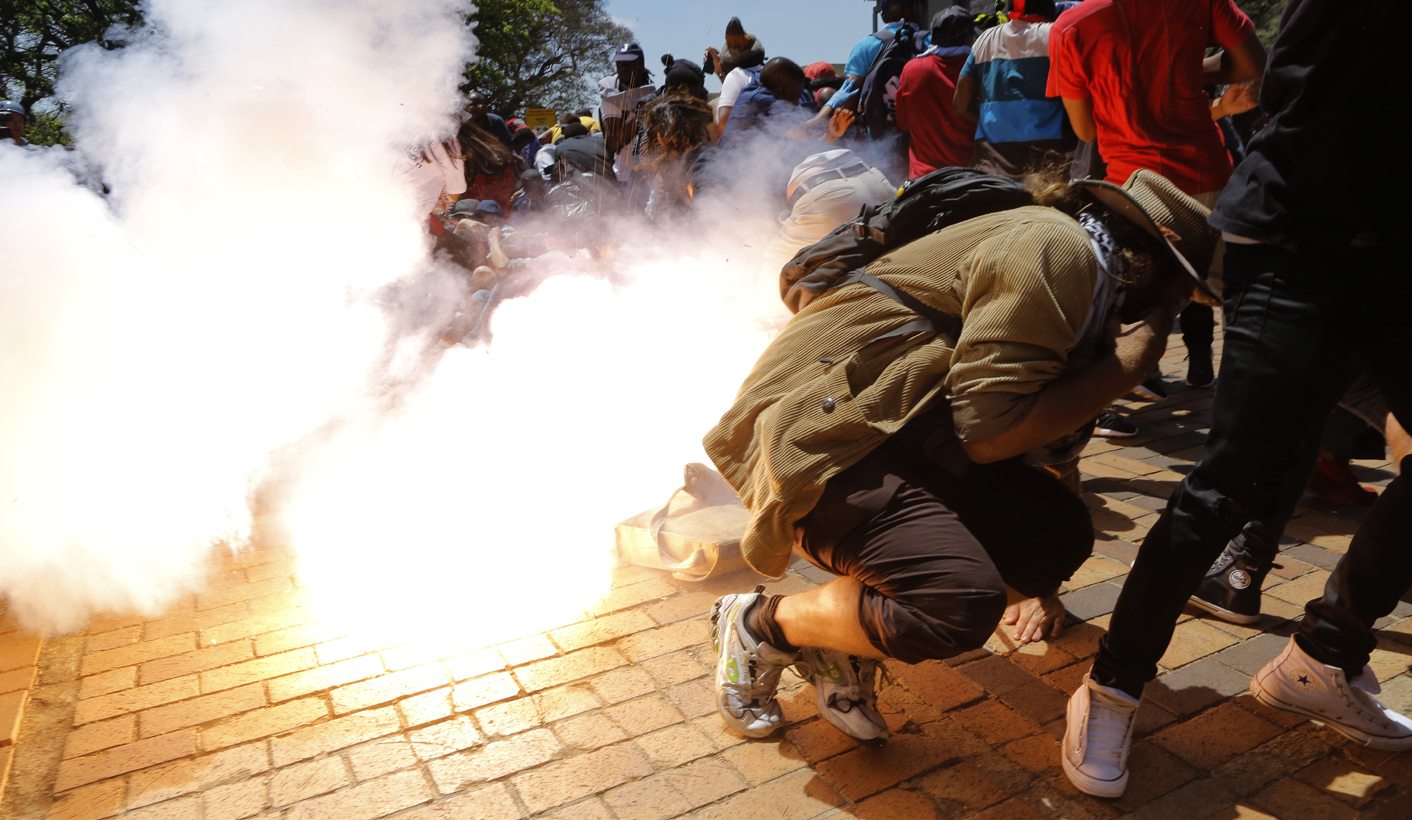 We all knew it would be a heavyweight bout between students, police and private security. On Monday, the fight spilled out of the ring, and into the audience. The Battle for Braamfontein was as sad as it was ugly, and while the University of Witwatersrand will remain open, to what end? By RICHARD POPLAK.

I promised you World War VII.

On Monday, University of Witwatersrand administration and #FeesMustFall protesters delivered.

This was the inevitable, sustained episode of ultra-violence that threw shout-outs to some of the worst days of Johannesburg’s mostly terrible history. Fog of war and all that, but through the smoke and the screaming and the bloodshed, it’s hard to know what either side achieved from this latest contretemps.

In the far corner, wearing the Witsie blue shorts, we have the university’s administration—who can point to any number of incidents to prove #FMF protestor incitement and provocation, in order to press the echo-chamber argument that… I don’t know, the kids are not all right?

In the near corner, wearing the #FMF black shorts, we have the protest leaders and their supporters, hangers on, and street-dwelling adjunct provocateurs—who got smacked around enough today, and did some smacking themselves, to encourage a shut down of the university, while alienating those with whom they will need to negotiate the whole fallen fees thing.

But back to the war.

The day dawned calm-before-the-stormishly, the sylvan concrete campus bustling with its usual morning activity. At first, it was difficult finding the locus of the protests: the university’s student body numbers 37,000; the protesters at their strongest numbered 2,000 and change. I located a group of 300 or so on the West Campus near the FNB building, as they were mobilizing to occupy its halls.

“Comrades, do not be tempted to engage with the fire extinguishers,” deadpanned a leader, warning her crew about the dangers of inhaling industrial chemical compounds. (Consider that foreshadowing.) Shortly thereafter, the computer labs were deliberately flooded.

But the semi-official kick-off occurred following the arrest of two students, for offenses that are still unclear. (One was allegedly carrying a sjambok, the other for covering her face with a mask.) A gathering followed a chugging Nyala onto the East Campus, and described a long lazy loop south, turning east past the Great Hall AKA Solomon Mahlangu House, then north, then back to the centre of operations, where protesters made it clear that they planned to enter the house and occupy it.

The foreign nationals stuffed into ersatz riot gear stared down at the mass of students singing struggle songs.

At about 11:20, student leaders counted down from three, and the stones rained biblically on Solomon House, booming off the riot shields of the private security kids. Two security guards returned the favour, and soon the lines were broken, protesters hurling rocks from several feet away, wallops off plastic sounding like canon rapports.

By this time, the Nyala on the west side of the square had farted into operation, and the whomp of stun grenades sent the crowd onto the lawns. Both sides had clearly learned much from the mayhem last Tuesday (kindergarten shit compared to this, I’m afraid), and while the SAPS moved their men and their vehicles into a kind of armoured laager around the square, the protestors made guerilla-like rock-throwing nibbles at their exposed flanks. (There was word of police sustaining direct hits – two SAPS officers were reportedly injured.) Then the popopopof rubber bullets, followed by the water canon making its Wits debut. Streams of tie-died rhino piss jetted after those dispersing along the library lawns. The dripping metal phallus swung round toward aim at a group of observers, who ran screaming.

“The hell did we do?” asked a student in sweet looking Jordans. “Isn’t there a drought on?” asked another.

A line of cops then moved in formation after the remainder of the movement’s more gifted lapidists, who had disassembled chunks of the university’s foundations for their hard-flung materiel. The police turfed tear gas canisters into classrooms, sending billowing clouds of poison across the pool, which caught the prevailing winds on its way to choking just about the entire fucking campus.

(A note on the zest of the gas: a colleague forward the theory that the SAPS had nudged Wouter Basson out of semi-retirement, and traded him a bakkie-full of test corpses for some hyper-wasabi powered variant of the traditionally milder chemical weapon. Either this stuff has been ramped in its potency over the course of the protests, or sinuses have been seared into sensitivity.)

This was now outright urban warfare, Fallujah-style room-to-room insurgent hunting. Word came that a small group of protesters were gathering in Braamfontein, outside the gates of the university, and I walked my way past weeping students, laughing students, stone-faced academics, a pigeon walking tight PTSD circles in the square, and a young woman bleeding from a wound to her face. After a short chat with some private security—“Habib is their parent. He must speak to them, Explain to them.”—I exited on Jorissen Street, into the day’s grim second act.

Describing what I encountered on Jorissen and Bertha as a “student protest” would only be partly correct, and only at certain points as the afternoon wore on. It was more of a protest carnival, with some of the “street youth” (is that still the politically correct term?) that hang out around these parts helping protestors set up a barricade of unidentifiable flaming objects at the intersection. The SAPS formed their own line further west along Jorissen, with only one Nyala and not nearly enough coppers to make a proper go of it. Concrete bins were dumped in the street, and rubbish swirled in sad, Simba Chip-packet eddies. One protester had donned a cardboard box as a flack jacket, another used a red Rubber Maid dishwashing glove to protect his rock pitching hand.

Around 13:30-ish, the détente was broken, as usual, by a Nyala rousing itself into action. It roared toward the intersection, cops firing rubber bullets out of its shooty-holes with a determined lack of shits to give. Almost immediately, a young woman was hit in or near the eye, blood streaming onto her chest. An elderly delivery motorcyclist, who somehow made it through the barricades, slid and smashed into the curb, S-bending his leg. A photo-journalist took a pellet to the patella.

At the intersection, the performance of protest: young men posing for the cameras, faces covered by bandanas, the Nelson Mandela bridge behind them for additional BBC voice-over poignancy.

This wore on until FMF leaders made their way to the intersection, urging the crowd to converge on campus to take Solomon Mahlangu house. This they did in a disciplined fashion, but the only way in was through the gates of Holy Trinity Catholic Church. There stood Father Graham Pugin, resplendent in white robes that refracted the sunlight back to God in his Heaven, saying quietly, “Be my guest, but it’s locked.” A small triage centre had been set up on church grounds, and the woman with the eyeball injury bled profusely into a kerchief.

Then came the cops, and another hour of roving street battles. Father Pugin maintained his position at the gates, and would not allow the Nyala into church grounds. Several minutes later, either in a fit of pique or by wildly coincidental accident, a cop shot a rubber bullet straight at vicar’s face. He took a direct hit, and blood gushed over his white robes. If you were hoping for a starker example of police brutality—and there were many on this day, most of them meted out against young black men—you were out of luck. For an encore, a bus was set on fire. It burned with the requisite photogenic drama.

Father Pugin’s capping capped a wretched day, where the Droogs threw in with the Fallists, the Fallists threw about three tons of Wits’s stonework at a row of teenaged Malawians, and the cops tried to take out one of God’s representatives on Earth, to say nothing of the protesters they shot. It was so genuinely unpleasant that one would hope the people we pay to run this country would come up with a way to fix the situation. But nope. President Jacob Zuma hides away in Kenya.

Meanwhile, the students say the council refuses to meet with them. The council maintains that the students refuse to meet with them. Tomorrow, the campus will remain open, even though only a negotiated ceasefire between the university, the students and the government will resolve anything—a negotiation that seems all but out of reach. Ntwa kgolo key a molomo, say the Setswana. The highest form of war is dialogue. Not here it ain’t. All the art has gone out of this situation, and we are now caught in the chokehold of the politics of the impossible.

Photo: Students from Wits University fall to the ground as a police thunder flash explodes amongst them during ongoing protests against the cost of higher education in Johannesburg, South Africa, 10 October 2016. EPA/KIM LUDBROOK.