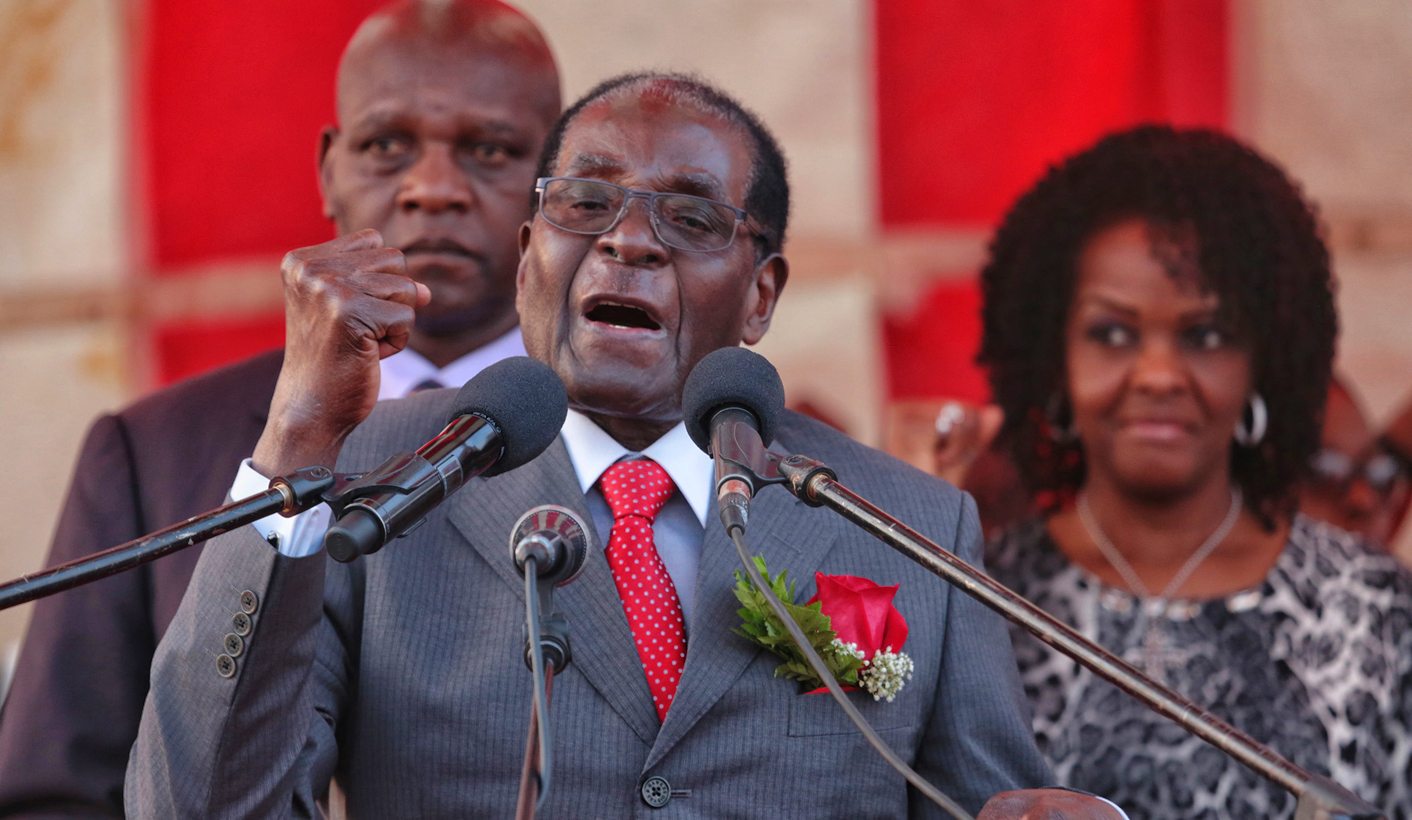 Abductions, assaults by pro-government thugs and anti-government demonstrations met by tear gas and water cannon all signal rising levels of violence in Zimbabwe. The situation is aggravated by the government’s failure to implement proposals for reform and mounting economic woes. Statement by INTERNATIONAL CRISIS GROUP.

Zimbabwe may not be a failed state yet, but its rulers are doing nothing to prevent its collapse.

After months of empty promises of reform, President Robert Mugabe and his party, the Zimbabwe African National Union-Patriotic Front (Zanu-PF), have set a course designed to mute criticism, criminalise political opposition and shut down any attempt to weaken their grip on power. The gloves are off.

At the same time, a renewed spirit of resistance and protest has taken hold, with an array of constituencies voicing their displeasure. Signals are multiplying of new violent confrontation to come. Under the banner of the National Electoral Reform Agenda (NERA), 18 opposition parties including the two most influential, Movement for Democratic Change-Tsvangirai (MDC-T) and Joice Mujuru’s Zimbabwe People First (ZPF), have embarked on a series of protests that state security services are determined to stamp out.

On multiple occasions in August and September police have resorted to tear gas and water cannon to disperse anti-government demonstrations; in late August the police introduced a ban on protests in Harare. They subsequently defied a court ruling overturning the ban by extending it to mid-October. Reports of abductions and beatings of activists by militias and covert security units have increased significantly and echo previous cycles of resistance and repression. A brutal assault on September 25 by Zanu-PF supporters on four senior ZPF leaders, including Brigadier General (Rtd) Agrippa Mutambara, former ambassador to Mozambique, confirms a trajectory towards more ruthless tactics.

The government shows no interest in dialogue and dismisses calls for reform, accusing NERA and the plethora of other protest groups of furthering a foreign sponsored agenda to create the conditions for regime change. It claims its opponents have received military training and now present a serious security challenge. This is supported by a conspiracy narrative played out in the state media. At the same time the government has reneged on promised policy reforms and dialed up its attacks on Western governments, including the United Kingdom and the United States, who paradoxically continue to provide the bulk of humanitarian support in response to a crippling drought and chronic food shortages.

Nor has the president spared domestic institutions. When Zimbabwe’s courts ruled in September that protests were legal and the Zimbabwe Human Rights Commission accused ruling party officials of distributing more food aid to loyalists, Mugabe denounced them for being in cahoots with the international conspiracy. The “offending” judge is now under investigation for soliciting a bribe.

With an economy in crisis and almost $2-billion owed just in international debt arrears, the government’s domestic borrowing (mainly through the issuing of treasury bills) has become unsustainable. Having failed to secure much-needed support from China, Zimbabwe’s desperation forced it to return to those traditional western lenders it had shunned, mocked and accused of criminal agendas for over a decade. However, the road back to credibility and potential solvency was always going to be painful; the government has to cobble together a loan package to pay its arrears before it can even qualify for critically needed additional budget support.

Twelve months ago, on the sidelines of the annual gathering of the World Bank and International Monetary Fund (IMF) in Lima, Peru, the government presented a re-engagement and recovery strategy for clearing its debt arrears and implementing related governance reforms. It was a limited framework, focused on financial and economic measures, but one that provided a sliver of hope that Harare was prepared to commit to greater transparency and accountability. This, it was argued, would buttress undertakings to address reforms outstanding from the previous unity government period, in particular the alignment with the constitution of hundreds of laws adopted in 2013.

Several western governments embraced the opportunity to rebuild bridges with Harare, expecting Zanu-PF to adopt a new approach. The government was saying the right things and there was a strong belief that economic realities would bring intransigent elements to their senses. These hopes have been dashed, however, and progress in implementing reforms has been stymied by opaque factional dynamics and political machinations within the ruling party.

The reforms were officially endorsed by President Mugabe, but his commitment to the process has been at best inconsistent. Promised changes to Zanu-PF’s controversial indigenisation policy and significant cuts in government expenditure (in particular reducing the bloated civil service salary bill) have not materialised. These and other measures to promote transparency and good governance have proven too difficult for Zanu-PF to implement, suggesting that government spending has become central to the party’s patronage system.

Finance Minister Patrick Chinamasa’s most recent pledge, in early September, to cut civil service salaries was promptly contradicted by Information and Communications Minister Chris Mushohwe, Mugabe’s nephew. It was a body blow to the government’s claims of being committed to reform.

Even if the government does secure funds to repay debt arrears, few development banks will be willing to approve loans amid the current uncertainties. Not surprisingly, Zimbabwe is not on the agenda for the IMF’s October Board meeting in Washington, DC.

Mugabe refuses to provide clarity or allow discussion on his succession, while a punishing schedule is visibly taking a toll on the 92-year-old president. Leaked intelligence reports reflect growing concerns about his growing fragility and frequent collapses. Vice President Emmerson Mnangagwa, regarded by many as heir apparent, has been weakened by opponents, who reportedly plan to use Zanu-PF’s national conference, scheduled for December, to thwart his presidential ambitions.

Mugabe’s sudden disappearance in late August from the summit of the Southern African Development Community (SADC) regional bloc fuelled feverish speculation. For almost 60 hours it was unclear where he was and whether, as multiple sources reported, he was at death’s door. On his return, he said he’d just gone to sort out some family affairs. The stunt was widely suspected of having been designed to test the loyalty of Mnangagwa in the role of acting president.

Prospects for recovery and stability look bleak. Divisions within Zanu-PF remain profound, although some believe the party may be able to put its differences aside to beat off the opposition ahead of the 2018 elections. It would be a short-term strategy, but in these dire straits short-term relief trumps long-term concerns.

On the economic front, the government may buy itself some breathing room in a debilitating liquidity squeeze by introducing bond notes in October. But many predict this new “surrogate currency” will further erode diminishing confidence in a government which is at pains to point out this is not akin to a return to the valueless Zimbabwean dollar. The move is likely to fan the flames of protest.

Neighbours are loath to step in. SADC members, with the exception of Botswana, have publicly ignored calls to engage. South Africa has gone so far as to endorse Zanu-PF’s assertion that there is no crisis to speak of. But this belies the reality of a profound sense of impotence and growing concerns among regional governments about where Zimbabwe is heading.

Silence should not be an option. In 2008, the region ignored the warning signs and did not hold Zanu-PF to account for almost 300 murders that marred the elections. Then, Zanu-PF did what it needed to retain power. Now, in spite of complicating factional dynamics, prospects of a repeat performance loom large. Stoked by economic collapse and the government’s desperate desire to hold on to power, Zimbabwe is back on a trajectory to further confrontation and repression. DM