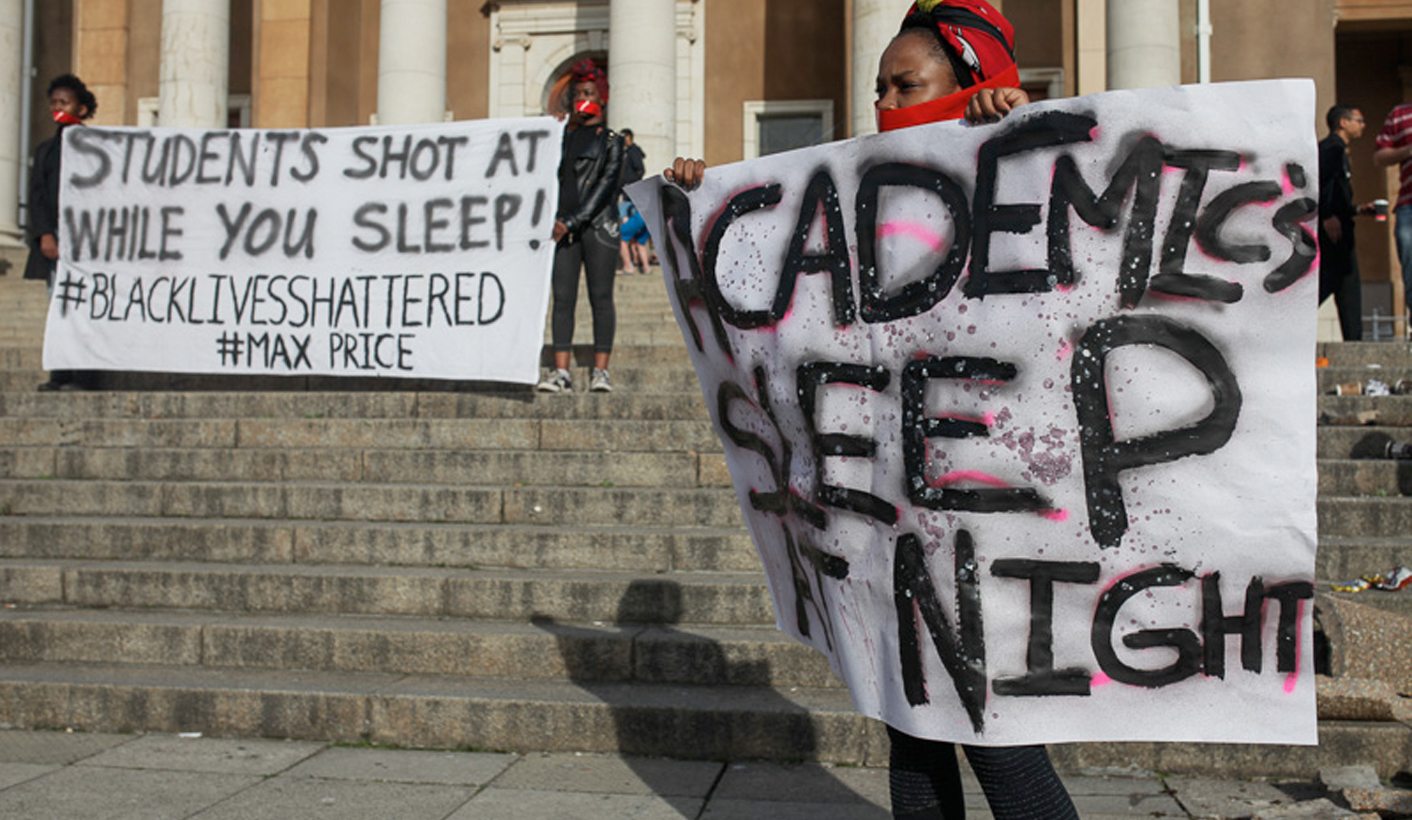 Students protested at UCT on Wednesday after clashes with police and security guards during the night. Wits also closed till the end of the week. By GROUNDUP staff. Photos by Ashraf Hendricks.

Staff were sent home from all CPUT campuses. In a statement, the university said the situation on the Bellville campus had become “totally untenable”.

“In the interest of the safety of all staff members the Vice-Chancellor has given permission for staff, across all campuses, to leave immediately.”

Spokeswoman Lauren Kansley said the decision followed a morning of unrest at the Bellville campus which included “a number of human waste flinging incidents”.

“In one incident the doors of the auditorium were forced open and protesters attacked a number of guests with the effluent. Visiting schoolchildren and international guests had to be escorted from campus under police guard and staff followed soon afterwards. Following the staff leaving, Vice-Chancellor Dr Prins Nevhutalu met with the protesters again, for the second time this week, but no resolution was reached. A decision on staff returning to work will be taken later today,” Kansley said.

CPUT Bellville student leader and Fees Must Fall representative on campus, Lukhanyo Vangqa, said leaders had only heard about the human waste incidents this morning, and did not know who was involved. “This is just another way of students bringing their point across about the continuous struggles they face,” he said.

Vangqa said the student leadership had a meeting on Wednesday with the vice-chancellor. He said he feared that should the meeting not produce results, “we might wake up to no campus tomorrow”.

At the University of the Western Cape, classes were suspended on Wednesday after two days of protests and disruptions of lectures. “Given the situation on campus, classes have been suspended until further notice,” UWC said.

UCT management said all campuses would be closed until the end of the week.

“The situation on campus is reaching a point where we are at risk of serious conflict and escalating violence and we will not be able to contain the situation without a very large increase in security and intervention by the South African Police Service,” communications director Gerda Kruger said in a letter to staff and students. “This would only serve to make matters worse and may lead to injury and even lives being at risk.”

On Wednesday, protesters moved through the campus disrupting lectures. When they disrupted a maths lecture in the Chris Hani building, the students in the lecture left. One of these students told GroundUp that the continuous disruptions in the university programme were demotivating.

Several hundred students gathered in the Leslie building where they were addressed by protest leader Athabile Nonxuba and politics professor Lwazi Lushaba. Lushaba said black academics would not sit on the sidelines “and watch black students protesting alone”.

In a speech which drew cheers, applause and shouts of agreement from the crowd, he said,“It is no longer enough for our black academics to continue going to class to teach, when our black students are here.”

Lushaba criticised the decision to bring private security onto campus.

“The process of decolonising these institutions cannot be driven by white management,” he said.

Lushaba said white critics of the protests were hypocrites.

“Why is it when black people are asserting themselves, white academics are now speaking in the language of rights?

“All we’ve done is to try to make this place habitable for ourselves as black people.”

The protesters then marched to the Bremner building where Nonxuba called for Vice-Chancellor Max Price to address them.

Acting Deputy Vice-Chancellor Anwar Mall told the students that university management had spent the weekend meeting with students and discussing “a lot of issues”.

“The students wanted to close the university for two weeks, and they shortened it to one, but we wanted to get started on the academic project. So we reached an impasse. We still sincerely wish to speak,” he said.

He promised to ask Price to meet the students tomorrow.

Earlier, expelled student Olwethu Mzayifani told GroundUp that protesters who had been occupying the SRC offices in the Steve Biko Students’ Union building had been “brutalised, victimised and beaten” by private security guards and police when they tried to collect their belongings from inside the building.

“When you brutalise students they will respond, because they are also human.”

He said the protesters, numbering around 200, had been dispersed with stun grenades and rubber bullets. Many people had been injured, he said.

“Black students are being victimised.”

Workers were also being victimised, he said.

Mzayifani said students wanted the university to open but only if their demands were met. They wanted a return of expelled and interdicted students, free education and insourcing.

Most workers at UCT are already insourced, but there have been complaints about the manner in which they have been insourced.

“This institution must not create the illusion that students are okay here,” said Mzayifani. He said that the protesting students wanted the university to open but only if their demands were met.

Kruger said protesters had “run amok” on the upper campus, setting several fires. Protesting students who had been occupying the Steve Biko building for two weeks had attempted to “reoccupy” the building, which had been secured with new locks. Private security guards had been placed at entrances.

In the early hours of the morning, a group of about 200 people had thrown stones at security staff, attacked them with sticks and “stormed” the building, breaking doors and windows. Petrol bombs had also been thrown, she said.

“Protesters then ran amok on upper campus, setting several fires. Security tried to extinguish the fires and attempted to disperse the group. One security officer was injured.”

Police had been called in. Six stun grenades had been used and a police officer had been hit by several stones, said Kruger.

A witness interviewed by GroundUp said private security officers had been aggressive and triggered a response from students.

Wits University management said the academic programme would be suspended until October 10 to allow negotiations between student groups, management and others. This followed discussions with former leaders of the Black Student Society and Students’ Representative Councils, supported by clergy, the university said in a statement.

The statement said the students had committed to saving the 2016 academic year and management had agreed to withdraw the police to the perimeter of the campuses “under the express commitment from all parties that there will be no violence or intimidation of students and staff”.

A General Assembly chaired by the Chancellor would be held on Friday 7 October to reach a common position on the principle of “full access to higher education”. DM

Photo: Students protested at UCT on Wednesday after clashes with police and security guards during the night. Photo: Ashraf Hendricks