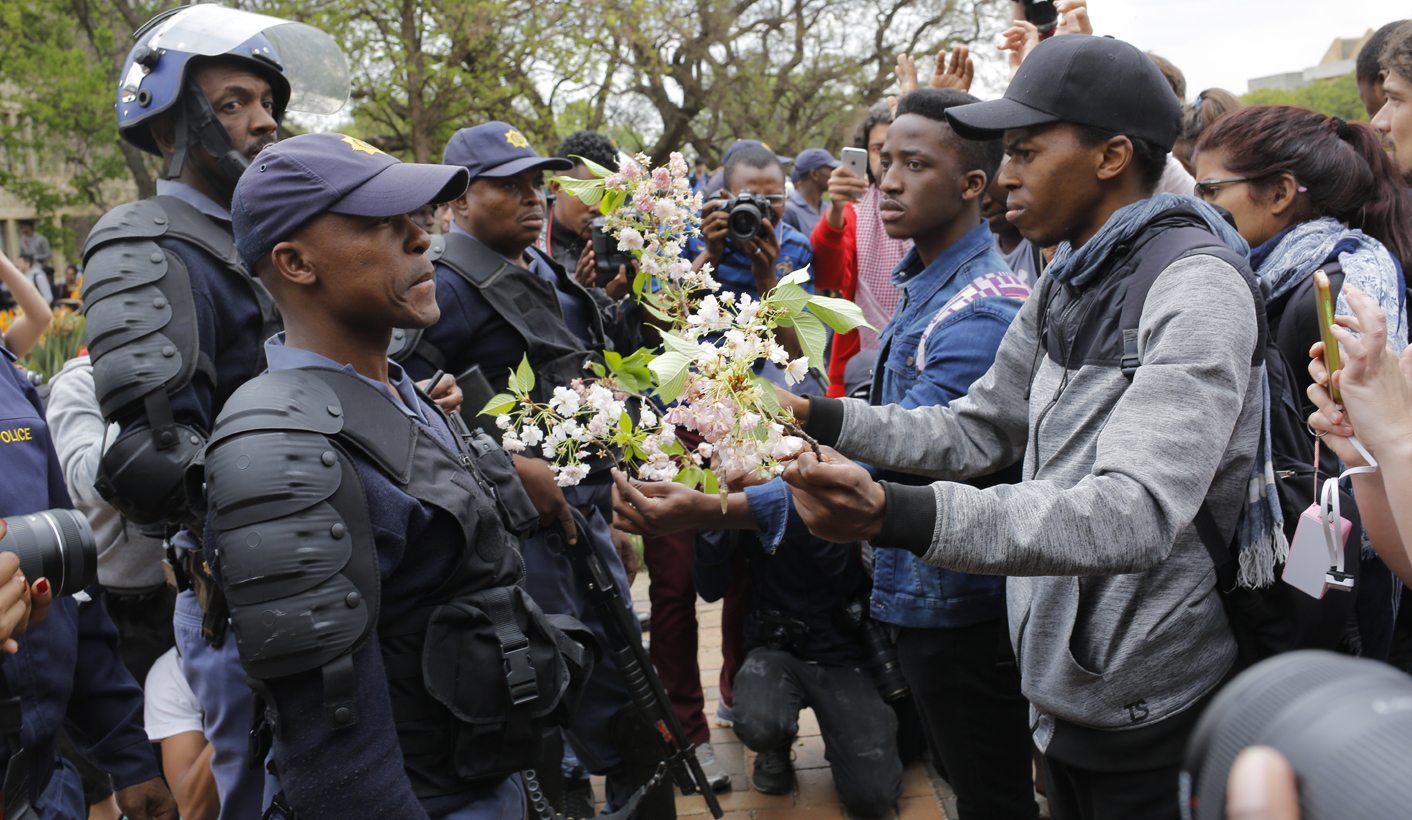 The Democratic Alliance (DA) on Thursday released a position paper on higher education funding. The party does not support free education or protests closing campuses and has proposed a reform of the NSFAS model and more government subsidies for universities. The only thing the DA and protesters are likely to agree on is the need to take the fight to decision-makers. By GREG NICOLSON.

The University of Witwatersrand (Wits) will hold a general assembly on Friday in which students will push for support of their model on free higher education for all. Wits argues that the full costs of study should be covered by all students and proposes government establish a corporate infrastructure investment fund to help cover university costs, scrap the National Financial Aid Scheme (NSFAS) and create a higher education endowment fund, which would fund students through a mix of increasing the skills development levy, increase in company taxes, a tax on companies that benefited from apartheid, and increases in taxes on the wealthy.

A number of higher education institutions have been closed in the last two weeks as protesting students broadly demand free, quality and decolonised education. Proponents often suggest extra taxes on the rich, cutting corruption and wasteful expenditure, reprioritising the state budget as some of the sources to cover the costs of free education. Some want it now, for all. Others suggest it should be phased in, starting with the poor. Some suggest only the poor or middle class should learn for free.

The Democratic Alliance (DA) does not support free education, it announced in a position paper released on Thursday. The party wants to expand and reform NSFAS to ensure university access is “free at the point of access” for the poor and increase government subsidies for higher education institutions. The party has no time for students who have closed campuses while forcing the issue of education costs onto the national agenda.

“We believe this is an impossible amount and the fiscus just cannot afford it.”

“Universal free higher education would translate into a subsidy for the better-off and would deprive the fiscus of funds which could better be spent on supporting poor students. In fact, universal fee-free education might, in fact, deepen inequality in South Africa and reduce the funding available to provide for the poor.”

The DA says fixing the funding crisis will cost at least R20-billion. It proposed government spend an extra R14-billion on university subsidies to raise higher education institutions’ revenue proportion from the state to around 50%, where it was around 15 years ago before government funding declined in relation to increasing university costs. In the short term, government should reprioritise funds in this month’s medium-term budget policy statement, said the DA.

“Most importantly, NSFAS should aim for a high loan recovery rate administered by SARS, in order to ensure the scheme is sustainable,” said the DA. “The effect of this approach would be to make university “free at the point of access”to poor students, while still enabling universities to retain a high level of funding and quality.”

Essentially, the DA wants to expand NSFAS to cover some of the “missing middle” and sort out its myriad problems. The current NSFAS system, despite receiving increases in government funding and supporting hundreds of thousands of students, still excludes many. NSFAS provides loans to students who are financially needy and academically qualifying and turns part of the loan into a bursary for academically successful students.

A ministerial committee reviewing NSFAS in 2010 said: “To qualify, students are subject to a means test. “Current NSFAS funding is limited to students whose family income is less than R122,000 per annum, which represents the upper limit of the lowest band of SARS tax tables. This limit is not an NSFAS policy guideline but appears to be used by most institutions as a cut-off point for eligibility, given the limited funds available relative to demand.”

The department of higher education and training’s report on free education for the poor in 2012 said: “Some universities and colleges apply the means test, but others do not, and even those which do, exercise institutional discretion in how they apply it. For example, institutions set their own income eligibility thresholds: what is considered ‘poor’ by one university may be considered well-off by another.

“The annual family income threshold for NSFAS students at the University of Cape Town is R250,000, at Rhodes University it is R180,000, while at the University of Limpopo and other historically disadvantaged institutions it is R122,000.” NSFAS’s 2016 submission to the ongoing commission of inquiry into funding higher education agrees challenges continue in funding students from families who earn more than R122,000 but not enough to qualify for commercial loans.

The DA’s Bozzoli on Thursday said the idea of tiered loans for students was new in SA and could help fund the “missing middle”. On the surface, the proposal could extend a level of financial support to students whose families would currently have to cover the full costs of studies.

“Increased subsidies, in addition to support for students directly, would also ensure that universities no longer have to rely so heavily on student fees as a source of income,” said the party.

Protests at campuses across the country have seen repeated demands for free higher education and not a reform of NSFAS’s loan system. The most determined demonstrators have demanded a revolutionary change rather than reform. The DA’s ideas might catch on with some more moderate students and parents, but the proposal of moderate reforms won’t feature in the current debate, which is centred on how free education can be achieved as soon as possible. It’s also too close to the ANC’s position.

Recent student protests kicked off after Higher Education and Training Minister Blade Nzimande recommended fee increases should be capped at 8% in 2017. He said government will cover those increases for NSFAS and students from households making up to R600,000 a year. In his announcement, Nzimande cited the extra billions devoted to NSFAS and said covering next year’s increase for the poor and missing middle would cost around R2.5-billion. A key reason for students deciding to protest was the minister’s failure to commit to free education and their distrust of the commission on the issue.

NSFAS has faced challenges since its inception. Sizwe Nxasana, appointed NSFAS chairman last year, has said a new model is being developed to address the issues. “This model plans to raise enough funding to offer comprehensive financial support to students from poor and middle-income households, as well as academic, psychosocial and life skills support,” he said.

In making its proposals on Thursday, the DA, which has stridently supported campuses staying open, condemned protesters. “A small group of students have, through violence, disruption, destruction of property and intimidation of others, brought the safety of other students into jeopardy,” it said. The DA called for protesters violating the law to be charged. It called for the SAPS to establish a task team to deal with the campus shutdowns.

Protesting students say police and security guards are trigger happy, escalating peaceful protests and making arbitrary arrests, while they attempt to close campuses, using what leverage they have.

The ANC has taken a similar approach, condemning violent protests and suggesting students should return to class while engagements on the issues continue. It has not, however, provided a way forward and at times has treated student issues with contempt.

While their approaches appear similar, the DA on Thursday pointed out that it’s not in government. It blamed the ANC for failing to sufficiently fund higher education institutions and for building pressure by mismanaging the economy. Protests for free education shouldn’t be at institutions of higher learning but at Luthuli House and government departments who make the decisions, the party said.

Despite their differences, that’s probably a point protesters and the DA might be able to agree upon as #FeesMustFall2017 enters a new stage. DM

Photo: Student protestors give flowers to Police forces as ongoing protests continue against the cost of higher education at the University of the Witwatersrand in Johannesburg, South Africa, 04 October 2016. EPA/KIM LUDBROOK