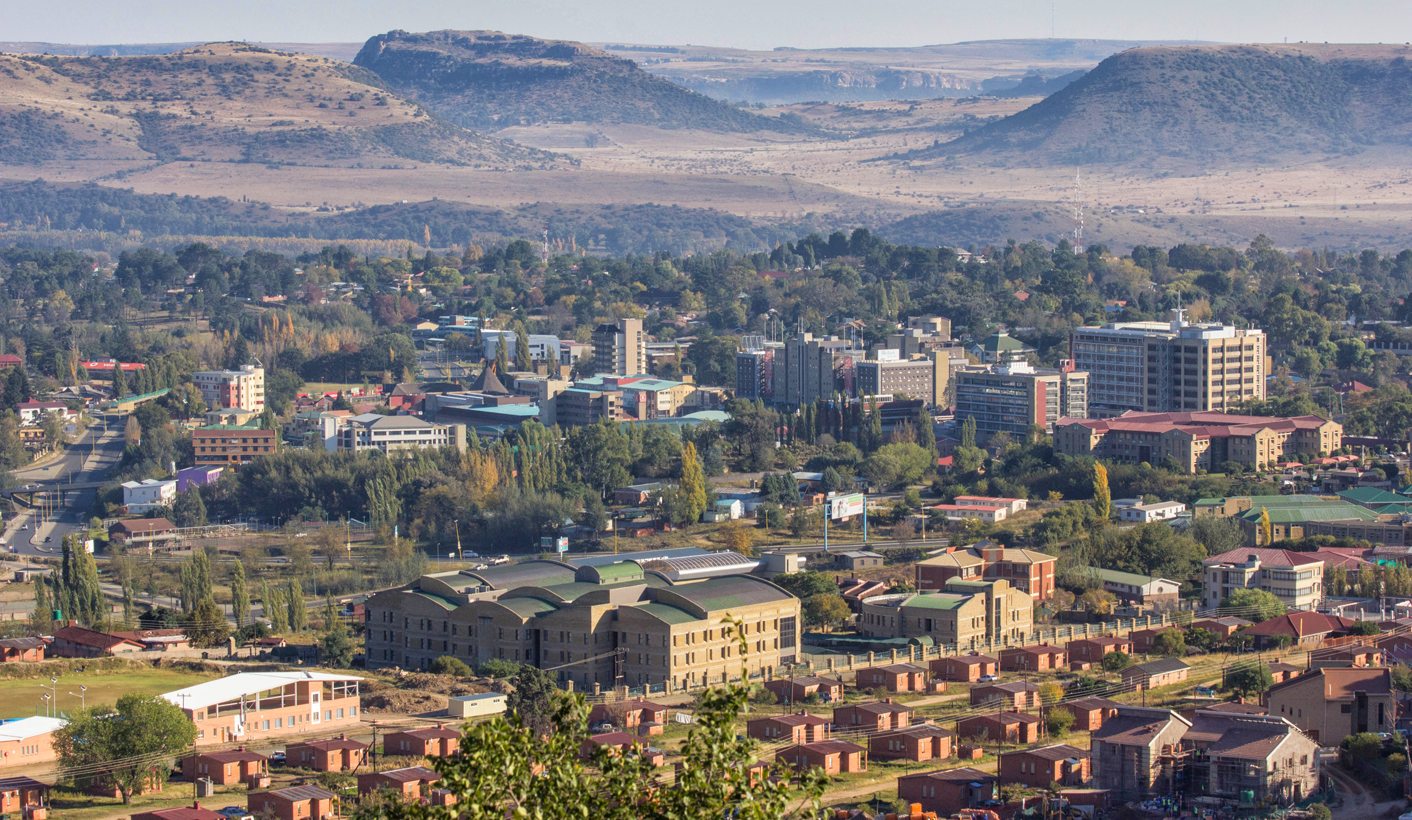 A string of politically charged murders and armed attacks in Lesotho, many of them allegedly implicating the military, remain unresolved – some more than two years after they were perpetrated. In several cases, the victims were associated with the opposition All Basotho Convention (ABC) or senior soldiers or police officers seen as linked to the political opposition. ABC leader and former prime minister Tom Thabane fled Lesotho in May last year, with two other senior opposition leaders. By Keiso Mohloboli and Drew Forrest for AMABHUNGANE.

The violent deaths include that of former Lesotho Defence Force (LDF) commander Maaparankoe Mahao in an alleged ambush in June last year. The minister of defence, Tseliso Mokhosi, said Mahao was shot while resisting arrest for leading an army mutiny.

Mahao’s death is a key focus of the Southern African Development Community commission of inquiry aimed at stabilising Lesotho.

Less well known incidents include a bomb attack on the house of Thabane’s wife and the killing of a senior policeman at police headquarters during an alleged coup attempt in 2014.

There is a widespread perception in Lesotho that the perpetrators are still at large because the government is afraid to confront military chiefs, particularly the current LDF commander, Lieutenant-General Tlali Kamoli.

Kamoli was named by the SADC Commission of Inquiry as a “polarising character within the Lesotho Defence Force”.

Before his dismissal by the current government, former police commissioner Khothatso Tsooana complained that the LDF had refused to hand over suspects to the police.

Police have not taken statements from the Mahao family, including his two nephews who were in the car with him when he was shot. The family allege they have not been kept informed about the progress of the investigation into Mahao’s death.

Mahao’s older brother, Nqosa Mahao, told amaBhungane last week: “No, we have not heard from the police. Even when we write to them they don’t bother to respond.”

Police spokesperson Clifford Molefe said investigations into the various incidents are continuing but that no arrests have yet been made.

Attempts to obtain comment from the LDF were unsuccessful. LDF spokesperson Ntleli Ntoi declined to answer questions on the phone, while delivery of questions sent to an e-mail address he provided “failed permanently”.

The key unsolved incidents of violence are:

In the early hours of January 27, 2014 the houses of former premier Thabane’s wife, MaIsiah Thabane, and that of a neighbour, were bombed. Three young members of the Thabane family, aged 21, 14 and 11, were badly burnt or otherwise injured.

Police were reported at the time as saying that unexploded bombs found at the scene bore the serial numbers of munitions supplied to the LDF by a South African manufacturer.

Nearly three years later, no one has been charged in connection with the bombings.

• Fatal shooting of a civilian outside Kamoli’s residence

On May 10, 2014, Lesotho citizen Lisebo Tang, 20, was shot dead by LDF members guarding Kamoli’s Ha Lekele, Maseru, house as she and her boyfriend drove past in a car. Her boyfriend, Tsepo Jane, was seriously injured. Police indicated that the vehicle was hit by 123 bullets.

The crime scene appears to have been tampered with – only seven empty cartridge cases were recovered. Commissioner Tsooana complained publicly that Kamoli refused to release the suspects, while the rifles submitted by the army for police analysis did not match the cartridge cases found at the scene.

At the funeral, Kamoli apologised for the incident, saying the soldiers had reacted to the car’s “suspicious movements” and had no “ill intention”.

A docket, CIR 121/04/14, was opened, but no one has been charged in connection with the incident.

In the early hours of August 30 2014, LDF members attacked the police headquarters in Maseru, the Maseru Central Charge Office and Mabote Police Station in what was widely seen as part of an attempted coup. Members of the police Special Operations Unit were allegedly assaulted by soldiers demanding access to certain dockets. Sub-inspector Mokheseng Ramahloko was allegedly assaulted and then shot dead, and the soldiers allegedly forced a badly injured colleague to drag his body to the parking lot where it was deposited in a car boot.

A case was opened in connection with Ramahloko’s murder, CIR 778/09/1, but no one has been charged.

On February 1 last year, two of Thabane’s bodyguards, Major Mojalefa Mosakeng and Lance Corporal Ngoliso Majara, were allegedly shot and injured by LDF members while securing the prime minister’s route to a rally at the national stadium in Maseru. Mosakeng underwent 10 operations to reconstruct his left arm, while Majara had reconstructive surgery on his face.

In the same incident, Mohau Qobete, a private security guard on guard at the headquarters of the ministry of education and training, near the Royal Palace, was killed.

• Killing of a prominent businessman

On the night of May 9 last year Thabiso Tsosane, a well known Lesotho entrepreneur and ABC activist, was shot dead by unknown assailants outside his construction business. The shooting was witnessed by Lemohang Lekhoba, who was in the car with Tsosane.

Police said an automatic rifle was used. No further information has been released about the progress of the investigation.

On June 25 last year, former army commander Maaparankoe Mahao was killed by soldiers close to his farm in Mokema, on the outskirts of Maseru, while driving in a car with his two nephews. Mahao had been forced out as LDF chief by Pakalitha Mosisili’s current coalition government to make way for the reinstatement of Kamoli, who was earlier removed by Thabane’s government.

The SADC commission of inquiry was appointed to investigate the circumstances surrounding Mahao’s killing and recommended Kamoli’s removal.

Mahao’s family said SADC facilitator Cyril Ramaphosa told them the team had undergone training and was now ready to resume the probe into the killing. However, the family was not told the names of the investigating officers.

In May and June last year 23 soldiers were arrested and detained at Maseru Maximum Military Prison for suspected mutiny.

Soldiers who have fled into exile in South Africa testified at the SADC commission that they were tortured at the prison to confess to having mutinied.

The SADC found that there had not been a mutiny and recommended the immediate release of the soldiers. Sixteen are still in detention.

Motumi Ralejoe, Mosisili’s spokesperson, said both the High Court and the Appeal Court found that the soldiers had a case to answer.

On July 9 this year, the editor of the Lesotho Times, Lloyd Mutungamiri, was shot four times in the face while sitting in his car outside his Maseru home. He survived, but underwent two reconstructive operations in a South African hospital.

The Lesotho Times had just run a front-page story alleging that the government offered Kamoli a R40-million golden handshake to step down as army chief. The report allegedly sparked unhappiness in the LDF.

The Times is regularly accused of supporting Lesotho’s opposition.

On July 20 this year, the vehicle of a well known Maseru medical doctor, Makoae Taoana, was found gutted by fire on Maseru’s Kofi Annan Road. Taoana later died of burns in a Bloemfontein hospital.

The doctor is alleged to have been treating the jailed mutineers. It has been claimed that his surgery was broken into shortly before his death.

Speaking on behalf of the family at the funeral service, Limpho Masoetsa appealed to Prime Minister Mosisili to ensure that police investigations were followed through to finality.

“In a previous incident involving another relative of ours, we were informed that police investigations were in progress only to find out later that the investigations never started,” Masoetsa said. DM

Photo: Maseru from Parliament Hill, by OER Africa via Flickr.

This story was produced by:

We are an independent, non-profit investigative journalism centre. Like this story? Be an amaB supporter. Sign up for   our newsletter. Visit us at amaBhungane.co.za.