SARS Wars: ROGUE – reclaiming the narrative from the inside out 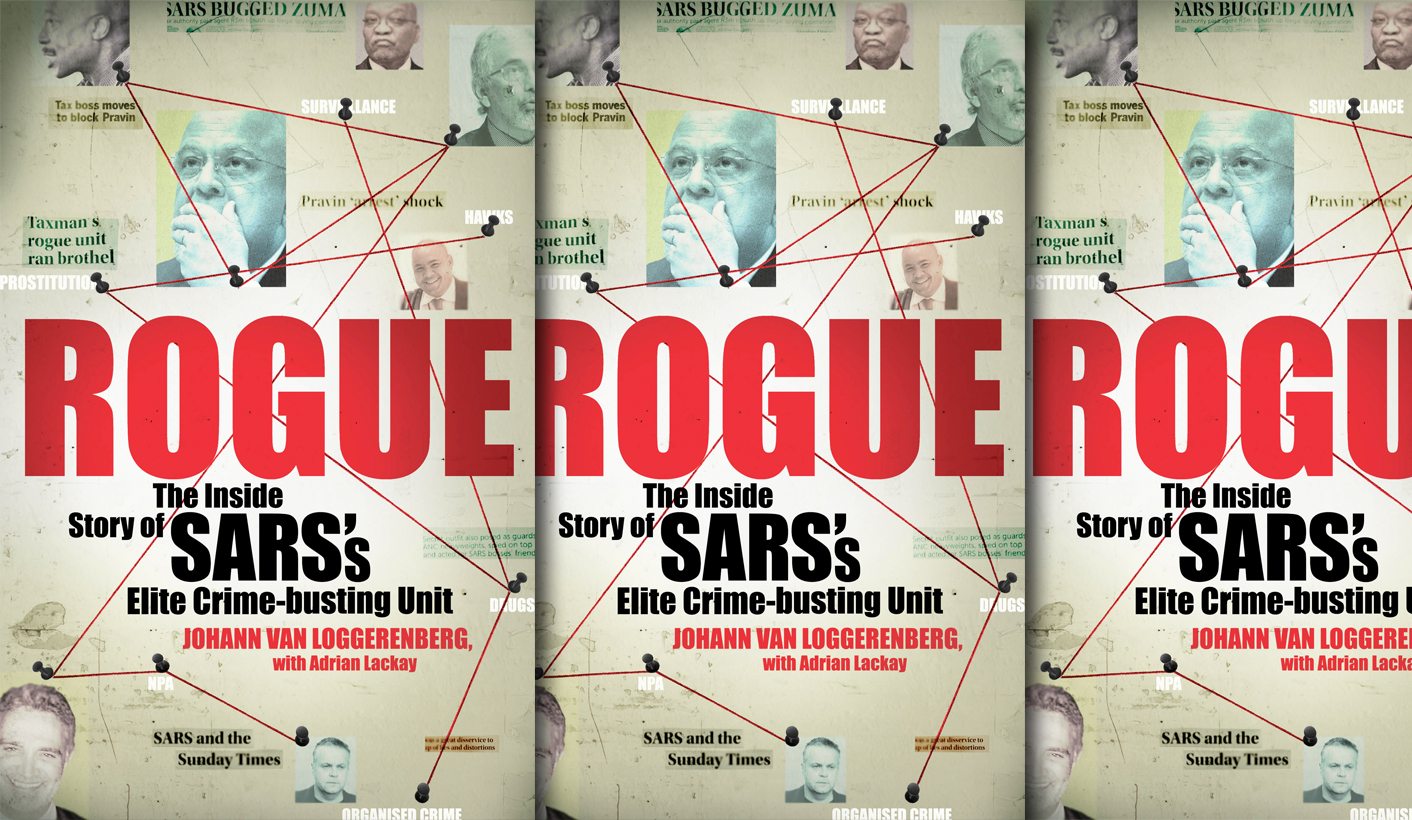 If there is one destructive narrative that has dominated headlines for two turbulent years it is that of an alleged SARS “rogue unit”. The shocking purge in 2014 of the entire SARS executive – an executive that had managed to transform the country’s revenue collection service into a formidable machine – remains unprecedented in South African history. The just-published Rogue – The Inside Story of SARS’s Elite Crime-Busting Unit, written by former Group Executive Johann van Loggerenberg with ex SARS spokesman Adrian Lackay, is an attempt at telling this remarkable story from the inside out. By MARIANNE THAMM.

“This SARS rogue unit stuff, it’s John le Carré, on tik man. How the hell do you hold onto it all?” someone quizzed me in December 2015 after a series of features about the unit had appeared in the Daily Maverick.

The “Rogue Unit” story is an ongoing and constantly unfurling saga, a saga of treachery and treason, betrayal and skullduggery of the darkest sort. The aftermath of events that occurred at SARS from 2014 to 2015, and which continue at present, will reverberate through the South African body politic for some time to come.

This is a story with no foreseeable plot or endgame at this point and that is playing itself out as you read this. Threaded through it all is an almighty battle between opposing forces in the ruling party – those who have attempted to thwart and mop up the devastating damage of the Zuma presidency and those who would like to see its largesse comfortably secured and spread even further.

On the one side is Finance Minister Pravin Gordhan who headed SARS from 1999 to 2009 and who was accidentally parachuted back to the Ministry in 2015, former deputy Commissioner Ivan Pillay as well as the rest of the SARS executive who were purged. It was Gordhan who turned the sluggish income tax service into a lean and mean machine and inculcated in staff the notion of serving “a higher purpose” – collecting taxes so that government could function and repair centuries of political collateral damage.

On the other side is a motley and shady gang of powerful, intersecting vested interests from multinational tobacco companies, abalone smugglers, crime lords, politicians, dodgy businessmen, rhino poachers, cheats, lairs, spies and double agents – all the usual suspects who cluster around easy money or ill-gotten gains. These are the people with the most to lose when placed under scrutiny.

At stake ultimately is the state’s or let’s rather say “the people’s” coffers, who’s filling them and who is emptying them out and why.

But the fact is, while the sensational saga of the so-called SARS “rogue unit”, its apparent exposure in a series of articles splashed across the pages of the Sunday Times for much of 2014 and the subsequent catastrophic fallout for the principal figures, might read like fiction, it was horrifyingly real for those accused and purged without a fair hearing.

Two of those casualties are Johann van Loggerenberg, former SARS Group Executive, and Adrian Lackay, ex head of the highly efficient SARS media communications unit. Both men, who were brilliant at their jobs, found themselves out in the cold six weeks after new Commissioner Tom Moyane was appointed to the top job in October 2014.

The men, along with their colleagues, have been accused of a variety of transgressions but these are yet to be tested in an impartial and transparent public process.

In the “Author’s note” Van Loggerenberg and Lackay explain that the unique investigative unit – at its height – had comprised just 26 people. By 2010 seven remained and that “to the general public, this was a fairly unremarkable section within SARS and it didn’t attract much attention”.

Until, that is, at least 30 stories were published by the Sunday Times over a period of two years which made the sensational claim that officials in the unit were corrupt, had spied on and bugged politicians, had run a brothel and had entered into illegal tax settlements.

“Many SARS officials who had long and distinguished track records as civil servants lost their jobs and their livelihood as a result. Their reputations were tarnished and their families suffered and continue to do so,” write Van Loggerenberg and Lackay.

In Rogue Unit – The Inside Story of SARSs Crime Busting Unit (Jonathan Ball) these two former senior employees take the reader on a journey into the heart of how the South African revenue service worked and how it was turned by Pravin Gordhan from a “low-profile organ of the state” into “ the most respected state institution in the country”.

The book reveals that the trouble all began when SARS started in 2013 to focus specifically on the legal and illegal tobacco industry and cigarette smuggling. Caught up in this underworld were several state employees including tax officials, members of SAPS and the Hawks. And where there is money, there is politics. And where there is politics there are spies. In the end all of these coagulated around illicit economies worth billions.

What this book offers is a clear and sustained overview of the key players and how the entire takedown was orchestrated. If the details of the sprawling story have been too complicated for you to digest in the serial media reports, this telling slots it all clearly into place.

Van Loggerenberg is discreet and careful not to overstep any legal boundaries and if you were hoping for a story that publicly flushes out or names the bad guys, you will be disappointed. Van Loggerenberg is a seasoned and meticulous investigator and this is evident in his writing which incorporates explanations of the technical legal aspects of various panels that were set up to “investigate” the “rogue unit”.

Van Loggerenberg also unpacks his relationship with Pretoria attorney Belinda Walter, who acted as a double agent for the State Security Agency and BAT while acting as a lawyer for rival tobacco company Carnilinx. It was Walter who laid the original complaint against SARS and who was one of the first who began to advance the narrative that a “rogue unit” that was not accountable to anyone had existed inside SARS.

At the time of writing, “Rogue” had hit No 1 on the South African best-seller book charts, an indication that there is a hunger and appetite for a deeper and insider understanding of events that affect the well-being of the country and its citizens.

Judge Johan Kreigler has written a foreword to the book where he says that he had been partly motivated to do so by a “personal sense of outrage at what these dirty tricks said about the rule of law in our country. For however opaque and perverted this Kafkaesque tale, there was a discernible pattern – discernible across a number of public institutions – where key individuals, experienced, reputable and independent-minded public servants, have been cynically shunted aside or out.”

The book is written at a cracking pace and with a sense of earnest urgency and nervous energy one can imagine in the cockpit of a plane about to attempt a crash landing.

Ideally Johan van Loggerenberg and Adrian Lackay – like so many good public servants in the system – would have liked to get on with their jobs out of the limelight. By all accounts they were too good at calling the bluff of those playing a high-stakes game of political poker with the country’s fiscus.

In years to come, “Rogue” will stand as testimony to a shameful post-apartheid era. For now it is Van Loggerenberg and Lackay’s only chance at aiming for a fair public hearing. Read it and judge for yourself. DM