Op-Ed: Teaching in a Time of Protest 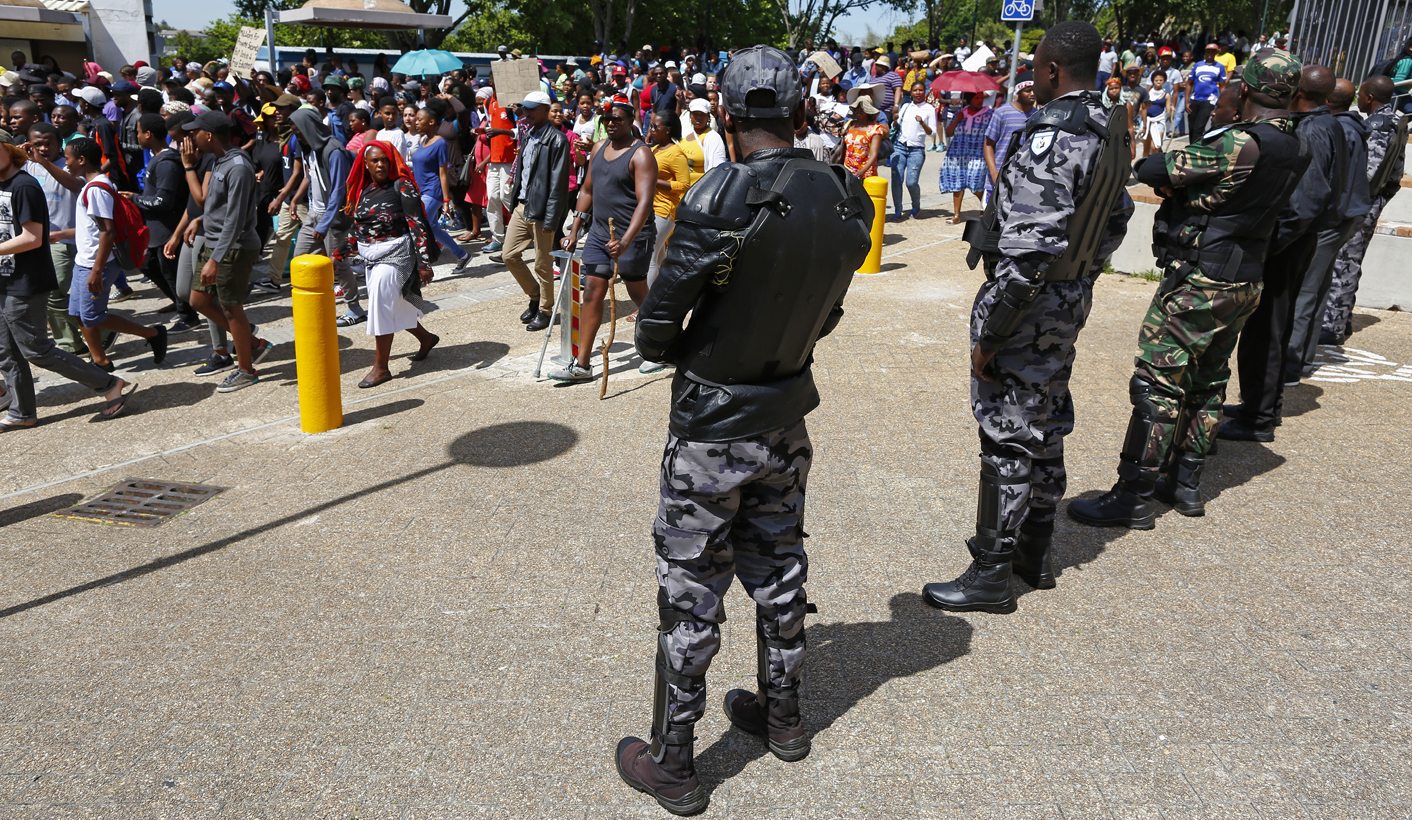 There hasn’t been a lot of discussion about teaching at universities since #Rhodes Must Fall raised issues about the state of transformation in higher education in South Africa. There has been a focus on the curriculum, on symbols, on the demographics of staff but not, to my knowledge, much discussion of the importance and complexity of teaching as a process. By ROBERT MORRELL.

This is unfortunate because teaching is important. It is important at a very early stage of a person’s life. In fact it is now widely accepted that the first three years of a child’s life are critical. For this reason there has been a growing emphasis on early childhood development.

Grade R was introduced into the formal schooling system as an acknowledgement of the importance of pre-primary education but the vast majority of South Africa’s young kids don’t go to creches or have a start in the education system that prepares them for the long educational road ahead of them. Pupils who matriculate will have spent at least 13 years at school, and in these years, the quality of the teaching they receive will be critical for their performance in tertiary education.

Any parent will tell you that one of the most important factors in a child’s education is that they have a caring, competent teacher. The difference between an inspirational, loving, supportive, diligent and well educated teacher and one who is uninterested, mean and prejudiced is enormous. About 15 years ago The Educator, an educational publication, ran a series on personalities who had changed their lives. Tim Modise, a radio personality, spoke about his primary school teacher. He subsequently donated R50,000 to the school to show his appreciation. Teachers make all the difference to young people’s ability to obtain the marks they need to continue with education as well as their preparedness for life after school.

The importance of teaching continues at the university level. At undergraduate level, a student will often remember one or two lecturers, long after she or he has finished their studies, as the inspiration who made the difference. By the same token, the difference between passing and failing a thesis can often rest on the commitment and skill of a postgraduate supervisor.

Universities have historically rewarded research productivity and excellence. Academic staff get rewarded, it is argued, disproportionately for their contribution to research, knowledge-production. Criticism of this imbalance has resulted in many universities introducing Distinguished Teacher awards, presented each year to stress the importance of excellent teaching.

What is excellent teaching?

Penn State University (one of the top 100 universities in the world) defines teaching excellence as:

There are many approaches to quality in university teaching including “best practice” approaches, learner outcome measures and peer review. These are not neutral however, and universities frequently locate these practices within the social and knowledge contexts in which they are located and, some might argue, from which their students come.

Current demands for “decolonisation” or “transformation” have thus far not dwelt on how knowledge transfer happens, how knowledge co-production happens. For decades, critiques of chalk-and-talk, transmission model forms of teaching have been circulating in South Africa. The move to outcomes-based education in the schooling system was in part motivated by the critique of Paolo Freire and his advocacy of education for liberation. He criticised the model of empty containers (pupils) being filled up with expert knowledge by teachers and advocated, instead, a democratic, participatory, model of education.

Over 40 years have passed since Freire’s Pedagogy of the Oppressed, but his ideas remain powerful. Possibly what has changed is that the knowledge economy has developed and specialist knowledge has gained a market value. The global university ranking system and the bibliometric emphasis on impact factors and citation counts have added to a world system that values research.

While research remains critical in universities, the importance of teaching has increasingly been recognised. In South Africa, for example, national pressure has been exerted on universities to increase their production of post-graduate degrees. This cannot happen with competent supervisors. And students with potential cannot be produced without skilled undergraduate lecturers.

What makes a skilled university lecturer? The job of a lecturer has many elements. She or he needs to be on top of the content of the field, know it in depth, and have a comparative grasp which includes global reach. She needs to have good communication skills – she needs to be able to listen while at the same time imparting knowledge. She needs to have empathy, understanding her students and their contexts and engaging with them, reaching them “where they are” rather than assuming a universal basic knowledge or life experience. She needs to be able to connect her knowledge with the world of real work, with the world beyond the university in a socially responsive manner.

The university lecturer’s job is to open minds as well as offer access to existing bodies of knowledge and ways of thinking.

The best teachers are empathetic and charismatic. They function as role models; they become an inspiration. A relationship of trust develops; students seek their advice not just about the subject they are learning but about life’s challenges. It is often this kind of lecturer that encourages excellent students to become academics, giving them a thirst for knowledge, nourishing a curiosity and a love of teaching and preparing the aspirant academic for the difficulties of an academic career.

Lecturers succeed when their work is valued by the institution, by their colleagues – and by students. They succeed when the delicate work of teaching is given space in an environment of trust. To seek knowledge requires the acknowledgement both on the part of the lecturer and the student that s/he does not know everything. It involves an admission of vulnerability. Lecturers and students will not enter this space if they feel threatened or unheard.

In the recent period, protesting students have complained that they cannot learn because they do not have lecturers who are like them. There is no doubt that the belongings or affiliations of staff’s race, gender, ethnicity, religion, age and origin are important. It is comforting to have a staff member who shares your background and with whom you can communicate with ease and depth. These staff members can also function as role models, inspiring students to reach for the stars. But the teaching process is about relationship and around the world, people form relationships of trust and goodwill across differences of background, age, gender, race and so on. Education is about some form of transcendence, of participating together with another person to move beyond where both find themselves.

Teaching does involve inequality. It must. The teacher and lecturer must know more than the learner even where the co-production of knowledge is pursued. She should also have a maturity that permits and forgives error and the wisdom to acknowledge her own limitations while seeking to support the learner to reach a higher level.

In the last 18 months we have seen very important developments in higher education. It has historically been young people who challenge orthodoxy and suggest new ideas. Knowledge production needs debate and universities should foster debate.

While there is much to be welcomed in the energy of university students, including the focus on social justice and inequality, there are severe problems with the current violent protests

While this may not refer to all protesting students, there is a growth of intolerance and disrespect among protesters which frequently is expressed in the disruption of lectures. These acts involve confrontations with lecturers and students wishing to learn. These confrontations invariably involve hurling abuse at lecturers, challenging and denying their authority. Their experience and expertise is denigrated. They are singled out, one individual, by a loud and aggressive group of students. They are bullied. Alongside this, students wanting to learn and progress are intimidated and their opportunity to learn is disrupted.

For the most part, protesting students have received the understanding of the media. As I write this, there are calls by students and some staff for management not to “victimise” protesting students. I have yet to see support from the media or from university management for the thousands of lecturers in the front-line who try to teach and risk being singled out and threatened in the process by protesters. It is these very lecturers who have contributed to making South African universities what they are. And South Africa has some of the best universities in Africa, including those most assailed – Wits and UCT.

Teaching is delicate work. It is slow work, transformational work. It has to be protected and nurtured and it has to take place in a safe and respectful albeit robustly discursive environment. The current protests are a sledgehammer. Apart from destroying infrastructure they are damaging the very roots of the educational project which, however imperfect it may be, is the lifeblood of the futures of these young South Africans. DM

Robert Morrell works at the University of Cape Town and writes in his personal capacity.

Photo: Private security looks on as students protest in support of the #FeesMustFall campaign at the University of Cape Town (UCT), South Africa, 04 October 2016. EPA/NIC BOTHMA