SARS Wars: Makwakwa, Elskie. What more will it take before the Hawks investigate? 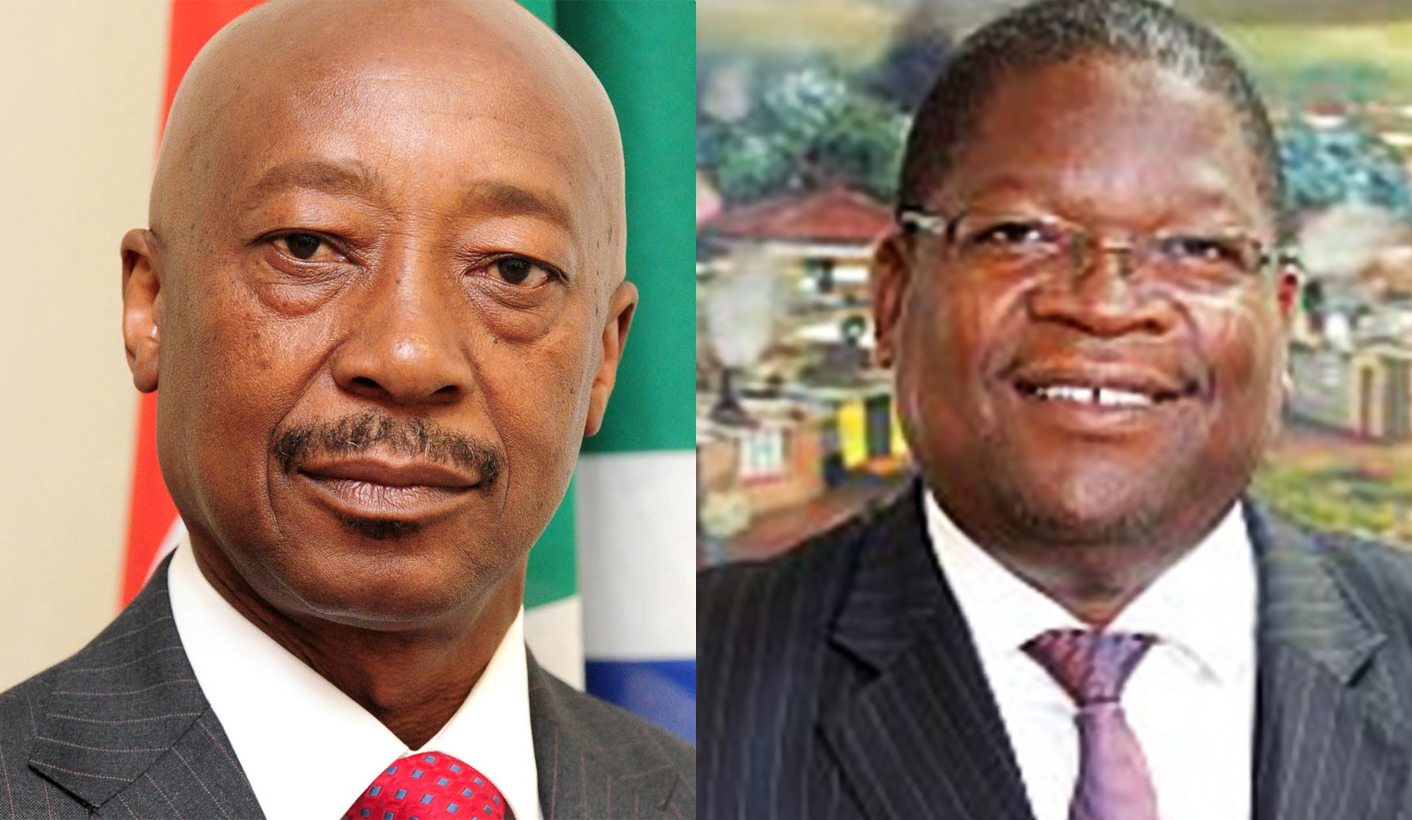 When is an alleged crime against the State not a crime against the State? When the Directorate for Priority Crime Investigation chooses coolly to suggest that explosive charges that SARS second in command, Jonas Makwakwa, and his girlfriend and mother of two of his children, Kelly-Ann Elskie, deposited suspicious amounts into their private bank accounts, are “an internal SARS matter”. Further allegations have since emerged that Elskie, despite allegedly lying about her qualifications, was personally appointed by Makwakwa to a highly sensitive unit dealing with high-profile tax cases. You'd think the Hawks would be all over it like flies on a collapsed pit latrine. You’d be wrong. By MARIANNE THAMM.

The Financial Intelligence Centre is not some outlier fringe outfit. It is a key institution brought to life by the Financial Intelligence Act of 2001, amended in 2015, and now awaiting the final flourish of the signature of President Jacob Zuma after having been passed by the National Assembly and the National Council of Provinces as well as being approved by Cabinet. However, two objections by the Black Business Council and the Progressive Professionals Forum, says the Presidency, have delayed Zuma’s final putting pen to paper while he applies his mind.

The FIC is critical in fighting the blight of financial crime, including money laundering, tax evasion and “terrorist funding activities”. Financial crime and tax evasion by individuals and multinational corporations rob the poor of billions across the globe and increase the tax burden on smaller, law-abiding taxpayers.

The amendment which is now being delayed includes the concept of “prominent persons” to the Act. It is a clause “which relates to prominent persons, such as domestic and foreign prominent persons. These classifications are intended to aid accountable institutions to properly identify their clients and do not entail a presumption that these prominent persons are more likely to be involved in any criminal activity.”

But, as we all know, prominent persons the world over tend to dislike scrutiny of their financial affairs and sometimes even think they are “smart” for avoiding the tax net. Take Donald Trump, for example, who is presently playing the hare caught in the headlights after The New York Times investigation into his 1995 tax returns that revealed he reported $916 million in losses, an amount against which he could shield his future profits over 18 years. Which in turns validate Hillary Clinton’s debate claim that the Republican nominee “doesn’t want the American people, all of you watching tonight, to know that he’s paid nothing in federal taxes”.

Jonas Makwakwa could be viewed as one such “prominent person”. His was a powerful position at the country’s most significant institution, the South African Revenue Service. According to an amaBhungane investigation, Makwakwa often acted as SARS commissioner in Moyane’s absence and simultaneously held the titles of Chief Operating Officer for Customs and Information Technology, Acting Chief Officer for Digital Informations Systems and Technology and Chief Officer for Business and Individual Taxes.

Makwakwa, along with Commissioner Tom Moyane, who is close to President Jacob Zuma, were instrumental in implementing Moyane’s “restructuring” of SARS after the purging of former officials including Deputy Commissioner Ivan Pillay, Group Executive Johann van Loggerenberg and others over untested allegations of an apparent SARS “rogue unit”.

Makwakwa had, according to amaBhungane, been involved in various controversial assessments including that of Durban businessman Robert Huang whose company, Mpisi Trading, was previously chaired by President Zuma’s nephew, Khulubuse Zuma. Another case involved Shawn Mpisane, who faced tax fraud charges. The prosecution collapsed and Makwakwa’s role in this failed prosecution has been questioned. Mpisane’s husband Sibusiso is mentioned in former Crime Intelligence head Richard Mdluli’s “intelligence dossier” claiming an alleged plot by key ANC figures in KwaZulu-Natal against President Zuma.

In March 2015 it was also Makwakwa who accompanied State Security Officials on a raid of the Riverwalk offices of the SARS Anti Corruption and Security Unit (ACAS) headed by Clifford Collings. The SSA had unknowingly raided the wrong offices hoping instead to raid those of the National Research Group, later known as the High Risk Investigative Unit (HRIU) – the one labelled as “Rogue” by the Sunday Times. The equipment confiscated during the raid of the ACAS offices was later erroneously attributed to the HRIU.

Interestingly, Kelly-Ann Elskie, who was suspended last week months after the FIC revealed that she had been captured on camera depositing large amounts of cash into her personal account, worked as a PA to Collings. Makwakwa was married at the time to Molebinyane Annah Makwakwa, who worked in the SARS enforcement division.

Evidence in possession of the Daily Maverick shows that Makwakwa was directly and personally responsible for organising the appointment of Elskie to a key position in SARS’s high court litigation unit tasked with dealing with the most high profile and sensitive cases. Elskie also allegedly lied about her legal qualifications but her promotion placed her in a position which enabled her to keep an eye on sensitive and high profile tax cases.

So when the FIC alerted Commissioner Tom Moyane in May this year that it had picked up suspicious activity related to the personal account of one of his most senior executives and his girlfriend, you would think the Commissioner would not hesitate to call in the Hawks. In fact, Moyane is obliged to do so according to Section 34 of the Prevention and Combatting of Corrupt Activities Act (PRECCA).

Instead, Moyane sat on the explosive FIC report which stated that Makwakwa and Elskie might be involved in or facilitating corrupt activities and may be guilty of living off the proceeds of crime or be involved in money laundering and that this be investigated “in order to institute appropriate criminal justice action”.

After the story had broken, Moyane later blamed the FIC for his tardiness in reporting the matter to Hawks head Lieutenant-General Mthandazo Berning Ntlemeza, claiming the banking regulator had “failed to co-operate” with Moyane. A classic passing of the buck.

Monyane only suspended Makwakwa on September 15 and Elskie last week. The Hawks have unfathomably claimed that the serious allegations are merely a SARS “internal matter”. Moyane has subsequently appointed “an independent and reputable international law firm, Hogan Lovells” to investigate what is clearly a criminal matter.

The Hawks clearly don’t want to touch it, which is highly unusual. What if, for example, Makwakwa had been caught on camera assaulting or killing someone in a SARS building. Would they claim that this too was an “internal matter”? To claim that Makwakwa and Elskie’s alleged behaviour is just that – an minor internal matter – is Dadaesque.

Moyane’s sluggish response with regard to his right-hand man and his girlfriend is in stark contrast however to his extremely swift action in purging the top executive of SARS after the “rogue unit” allegations.

SARS has refused to comment on the Makwakwa and Elskie matter and simply ignored Daily Maverick’s set of questions sent last week with regard to revelations of Elskie’s alleged lying about her qualifications as well as the role Makwakwa played in her appointment to the high court litigation unit.

Developments around Jonas Makwakwa also reopen questions with regard to the so-called “Kroon Commission” appointed by fired Minister of Finance Nhlanla Nene and chaired by retired Judge Kroon to investigate allegations of the “rogue unit” in SARS.

Makwakwa was one of the panellists on the Kroon Advisory Board and was tasked with casting judgment on a number of issues relating to the “rogue unit” including Johann Van Loggerenberg’s “improper relationship” with triple agent, lawyer Belinda Walter. A bit rich considering his own improper relationship with a then 24-year-old subordinate.

Another member of the advisory board was Advocate Rudolf Mastenbroek, former husband of Sunday Times editor, Phylicia Oppelt, who was at the helm of the newspaper when it ran a series of unsubstantiated reports that a rogue unit had operated at SARS. The Sunday Times was later ordered by the Press Ombudsman to apologise and for contravening several sections of the Press Code.

Mastenbroek was exposed by former Sunday Times journalist Pearlie Joubert, one of the paper’s sources for the “rogue unit” narrative which underpinned all the stories published in the paper.

Several costly investigations into the “rogue unit”, including the Sikhakane Report (headed by Advocate Muzi Sikhakhane, the man who, incidentally, defended President Jacob Zuma’s “honour” in the “spear of the nation” painting saga) as well as a KPMG report, which cost taxpayers R26-million, are yet to be released.

All of this happened on Moyane’s watch.

Meanwhile, the HAWKS and the NPA have spared no resources hounding Minister of Finance Pravin Gordhan as well as Ivan Pillay, Van Loggerenberg, former SARS spokesperson Adrian Lackay and others. This case is being overseen by Ntlemeza himself, head of the Hawks Crimes Against the State Unit, Brigadier Nyameka Xaba, three colonels, NDPP head Shaun Abrahams, head of the National Priority crime litigation unit Dr Torie Pretorius and his Senior Deputy Chris Macadam, as well as senior advocate Sello Maema.

The pentimento behind the shameful SARS saga is slowly being revealed. You’d need to be as blind as a Texas salamander not to see it. DM