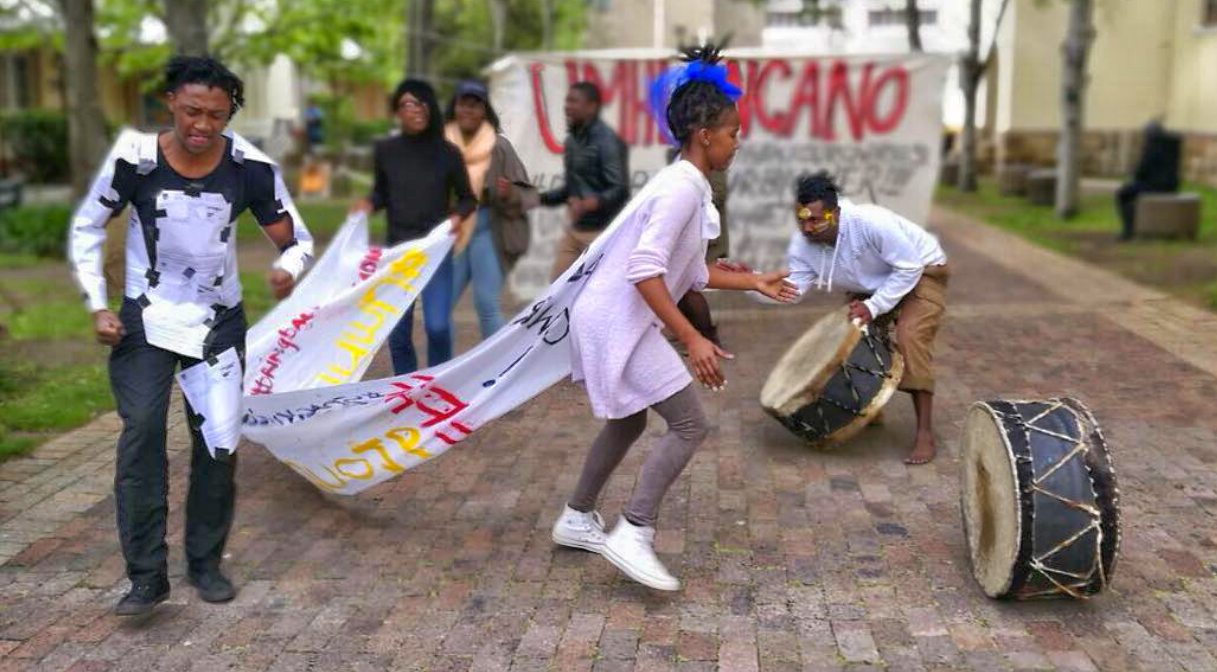 As tensions continued to run high throughout the country over student fees on Monday, a small group of art and drama students protested (peacefully) on UCT’s Hiddingh Campus in Cape Town’s City Bowl. Adding a slightly surreal flavour to what had been a highly charged two weeks elsewhere, the group opted for balloons, koki pens and a touch of yogic breathing as tools of protest. But their make-love-not-war approach raises a more important question. Many have argued that the students have every right to protest – just not violently. The Hiddingh protesters are something of an acid test. Will their polite, playful voices be heard? By MARELISE VAN DER MERWE.

The group Umhlangano – which prefers to speak as a collective, rather than identifying spokespeople by name – made headlines at the end of September 2016 when they were reportedly prevented from making artworks about the #FeesMustFall protests. The situation apparently escalated over obstruction of the entrances and exits of the Hiddingh campus.

Umhlangano wants more inclusivity, more conversation, more safe spaces, more decolonisation, more balloons. Their standpoint is clear: “UCT has threatened Umhlangano with war; we need you to bring along anything that would make the armed forces charging at us look ridiculous. MAKE THE REVOLUTION LOOK CUTE AF. This is a safe space… for all bodies and identities.”

A simple enough instruction; but Umhlangano says security forces have been unnecessarily heavy-handed with them thus far. There have been unconfirmed reports of some of its members being traumatised enough to need sedative medication.

“All of us have broken down at some stage,” one member said last week.

UCT spokesperson Pat Lucas earlier said the university had responded with “limited use” of security forces on Hiddingh campus.

UCT, speaking of negotiation processes more generally over the weekend, appeared exceedingly frustrated with the communication breakdown. Vice-Chancellor Max Price issued a statement close to midnight on Sunday with a “heavy heart”:

“I had hoped to report an agreement arising out of a mediation process that has continued all weekend, but it has now concluded without resolution,” he said. “We are therefore faced with the following choice: opening the university with the necessary security or compromising the academic project for the rest of the year.”

Said communication breakdown occurred, among other things, over the call for an internal truth and reconciliation commission for the #Shackville protest earlier this year. The group of students with whom university management has been negotiating – referred to variously as SRC candidates and the TRC Commission (the SRC election process itself has been somewhat fraught) – have a number of demands, but one of the urgent ones is a TRC to probe the inquiry and disciplinary processes following #Shackville.

Negotiations appear to have reached an all-time low, according to Price’s statement.

“I joined the Special Executive Task Team (SETT) in its engagement with the ‘SRC Candidates’ to try to find a way forward. […] It included an excellent mediator that the students proposed and SETT agreed to. I felt all along that we were making good progress and reported to Council and to the Senior Leadership Group that I was hopeful that we would sign the proposed agreement. That certainly was the conclusion we had all drawn by midday Sunday.”

This agreement meant the university could open on October 3 with minimal security, and preparations would begin (with campus open) for the Institutional Reconciliation and Truth Commission (IRTC), said Price. “In addition, the five expelled and six rusticated students would have been considered by the IRTC panel for some sort of amnesty should certain conditions have been met.” Price released a draft negotiation document.

According to Price, however, upon reconvening in the afternoon, the student group reported that they no longer wished to sign the document and wanted the university to remain closed for at least another two weeks, arguing that the campus needed to remain closed in order to prepare for the IRTC. Negotiations stalled when the student representatives reduced the demand to one more week, but would not guarantee that after that week the university would be open, said Price.

The students, for their part, issued a fuming response, saying Price released the document in bad faith and contrary to the terms of their agreement.

“We write this statement with disappointed hearts. Disappointed at the arrogance of the University of Cape Town and its management,” they wrote. “Disappointed by Max Price. Disappointed at the lack of directive and constructive leadership from the institution. The Vice-Chancellor has released an e-mail without complying with the agreement he had with the SRC Candidacy.”

The agreement, they explained, was that no communications between the negotiators would be released without mutual sign-off.

Pressure on all universities is mounting to reopen, with wounds still raw following the death of a Wits employee. Universities South Africa recently reported that the damage to universities across the country is running at around R600-million. On Sunday, senior security officials confirmed that President Jacob Zuma had called for police to act in an “uncompromising way” to enforce the law if protests did not come to an end. Protesters were being influenced by “regime change agents”, a security directive reportedly said. Additional instructions included gathering evidence for maximum ease of prosecution, and noted concern over student leaders’ use of social media communication.

In a country still reeling from the aftershocks of Marikana, it should be concerning that a year after #FeesMustFall began, there has been a call at government level for increased force. The ongoing deadlock is not helping either. On UCT’s campus throughout Monday, the ripples of failed negotiations were felt. By midday, six protesters had been taken into custody (later released); later in the day, reports surfaced of racial profiling by security staff. Students claimed that white students were being let onto campus without question, while black students were going through laborious security checks or harassment. These reports could not be verified independently.

In this context, the de-escalation advocated by Umhlangano is worth watching – and its effectiveness worth measuring. Monday October 3, one member posted on Facebook over the weekend, was to be “D-Day” as campus reopened. And indeed the Hiddingh cause did attract support, the group having posted, among other things, an arguably unusual request for food, airtime, art materials and… instruction in yoga and breathing exercises.

For all its playful approach, however, Umhlangano is unambiguously nailing its colours (bright) to the mast. In addition to calling for campuses to be more inclusive, it has clearly opposed the use of private security by university management. It is asking, uncompromisingly, for the university to be a safe space, both physically and psychologically, for all. It has reiterated the call for a truth and reconciliation commission to examine #Shackville. And it is unapologetically aligned with the cause of its fellow student protesters.

But will the approach work? It will be difficult for critics to deflate Umhlangano’s game plan (it does involve balloons) with an escalation to violence, not justifiably anyway.  Detractors may opt for ridicule, but that will likely not achieve much. As protest strategy goes, Umhlangano may have struck gold (literally: one prominent protester has been wearing a lot of metallics). As methods, performance poetry and balloon displays are indisputably benign; the pressing question – for the fee protests and for South Africa more generally – is what will follow.

The group says it is negotiating directly with the Dean of Humanities and the staff of Drama and Fine Art and will continue to stand for its message and methods. “We are intervening peacefully, making art, performance and play-making on the Campus Formerly Known as Hiddingh,” it explained.

“On Monday, the institution [sent] former soldiers, dressed in private security uniforms, in full body armour against us. For making art, for intervening peacefully, for doing the work that they just want us to study, but we guess, not actually practice.

“Artists are expected to intervene in society,” the group added. “To make meaningful contribution, to shift the status quo […] We are trying to make safe space to explore what a free decolonial education looks like after years of listening to how the institution just needs time to implement substantive reforms but never does.”

With all that said, UCT management said on Monday afternoon that it was “spelling out the code of conduct” to students. In terms of the code, even peaceful protests are subject to disciplinary action if they break the rules of the university. Umhlangano is not in the clear.

“I wish no student to be ignorant about what constitutes unlawful protest behaviour,” Price said. “Disruption of classes, blocking of entrances or exits, interfering with traffic flow, putting up barricades that prevent people from conducting normal business or attending classes, and any form of intimidation – whether physical or verbal – is unlawful.”

In the meantime, both protests and negotiations are expected to continue. Watch this space. When art and politics collide, it’s likely to get – how shall we put it – colourful. DM