Kunduz, Afghanistan: A South African nurse remembers the day the US bombed a field hospital 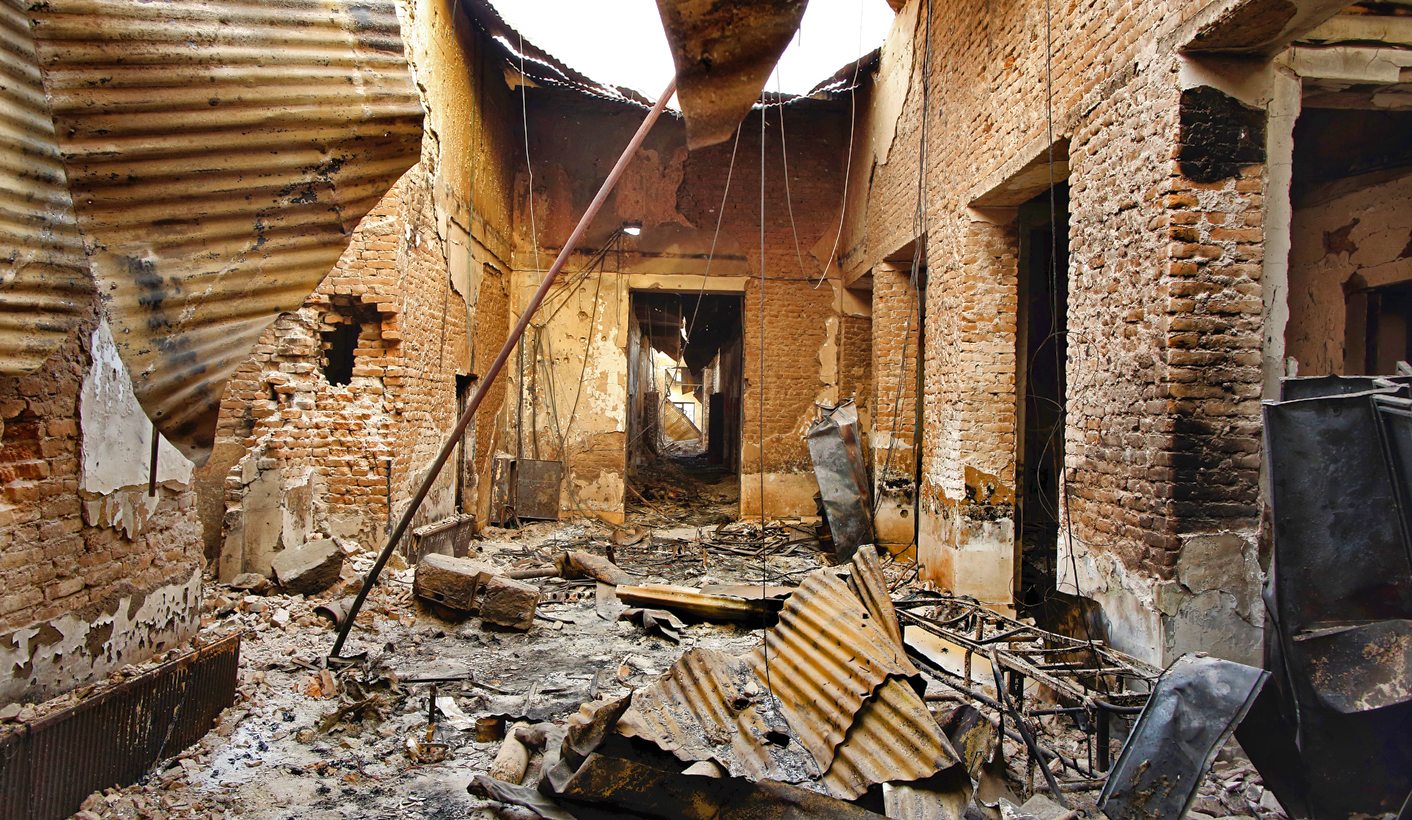 A year ago, a Doctors Without Borders hospital was bombed by a US gunship in Kunduz, Afghanistan. Jonine Lotter, a South African nurse, was there. She speaks for the first time about her experience, and how the impact of the bombing has been felt far beyond Afghanistan’s borders. By SIMON ALLISON.

Exactly a year ago, Jonine Lotter was in Afghanistan. The 41-year-old nurse, originally from Stellenbosch, was on her first mission for Doctors Without Borders (MSF), and found herself posted to Kunduz, a town in the remote north-east of the country.

It was dangerous, difficult work. As fighting intensified in late September between the Taliban and the Afghan National Army, the makeshift hospital that MSF had built – at first just modified shipping containers – began to fill up with the injured and near-dead.

“During my 15 years as an operating theatre nurse, I have seen many trauma patients, but nothing prepared me for what I was to experience…everywhere, on the floors, in the corridors, were wounded patients. Men, women, children, babies, all fighting for their lives.

“I remember a baby we operated on, he lost his right leg from a bomb blast. I remember two pregnant women that were both shot in their abdomens. One lost her baby, the second woman’s baby survived. I remember a man that lost both his legs in a bomb blast. The amount of blood left in his body was so little, we thought that he might die during the operation. If we didn’t operate, he would surely die. We took the chance, and he survived,” she said.

Photo: MSF staff in shock in one of the remaining parts of MSF’s hospital in Kunduz, in the aftermath of sustained bombing 03 October 2015. Photo: ©MSF

But things were about to get much worse. Lotter still struggles to speak about what happened next, and is only doing so now to commemorate her colleagues who didn’t live to tell the tale. Overcome by emotion, she pauses several times as she does so.

In the early hours of October 3, during a lull in the fighting, MSF’s surgeons and nurses – some foreigners, but most from Afghanistan – were frantically trying to get through their backlog of patients. Lotter had left them at around midnight to get some sleep. She was soon woken up by the sound of gunfire from an enormous American warplane circling overhead.

Incredibly, unbelievably, the Americans weren’t shooting at the nearby Taliban-controlled compound. They were aiming at the hospital.

“Within a matter of minutes the whole hospital was in flames. People who tried to run for safety were shot down,” said Lotter.

“The meeting room in the hospital grounds became a triage room. A few hours earlier these were my colleagues, now I had to treat their wounds. The horror we faced inside that room is still too much for me to talk about,” said Lotter. “Fourteen MSF staff members, four caretakers and 24 patients died inside the hospital that day. Burned to death, or blown into unrecognisable pieces.”

The fog of war

A lot of people die in Afghanistan. But the Kunduz attack was different. It didn’t just destroy a hospital, and the lives within it; it also deprived tens of thousands of other civilians of access to modern healthcare.

Photo: Doctor Evangeline Cua (centre with purple scarf) together with MSF medical staff treat wounded colleagues and patients in the immediate aftermath of the 03 October aerial bombing of the hospital in Kunduz. MSF was later made the difficult decision to cease all activities and evacuate the damaged hospital 04 October following the targetted attack on its staff, patients and the medical facility.

The hospital in Kunduz was on a list of supposedly protected facilities that was supposed to guarantee that it was not targeted by US or Afghan forces. Its exact location was known to US military; just days before, MSF had reconfirmed the GPS co-ordinates. Yet this did not protect the hospital from the devastating US air strikes.

The US has proffered several different explanations for why it was bombed. It first said that US forces were under threat, and the hospital was collateral damage in the US response. It then argued that Afghan forces had called for the air strike because they were being fired upon by Taliban inside the hospital. Finally, in the official US report into the incident, it concludes that it was a tragic accident; that it was just one of those things that happens in the “fog of war”.

“The investigation found that the incident resulted from a combination of unintentional human errors, process errors, and equipment failures, and that none of the personnel knew they were striking a hospital. The trauma centre was a protected facility, but it was misidentified during this engagement,” said General Joseph Votel, head of US Central Command. The military personnel have been disciplined internally; none has faced criminal charges.

MSF isn’t happy, pointing out that the perpetrators of the incident can hardly be expected to hold themselves to account. It has called for an independent, impartial investigation, but the US has stonewalled. So, a year on, we don’t really have any answers: Why was the hospital targeted? Why were those GPS co-ordinates ignored? Will anyone be held to account for the deaths of 42 people?

The impact in Kunduz extends far beyond those 42 deaths.

MSF opened its hospital in Kunduz in 2011. It had 92 beds, an emergency room, two operating theatres, an intensive care unit and an X-ray machine. It was the most sophisticated medical facility in the province, and was always full – even people from neighbouring provinces would make the long trek there for treatment. While it existed, it treated 68,000 emergency patients, and conducted more than 15,000 surgeries.

Photo: Staff and doctors in the MSF Trauma Centre in Kunduz, Afghanistan, treat people wounded in fighting that has broken out in the town, 01 October 2015. NOTE: This image was taken two days before the hospital came under aerial attack killing staff members and patients and partially destroying the facility.

It treated everybody: men and women, adults and children, terrorists and Taliban. MSF asks few questions of its patients beyond those necessary for treatment: its philosophy – one that’s won the organisation a Nobel Peace Prize – is that every person who walks through its doors gets medical attention, regardless of who they are or what they represent.

In this image from earlier days: Ahmad Jan is 80 years old and he was caught in a crossfire in his village while trying to go to the bazaar. He was taken from his district of Imam Sahib to Kunduz City by local villagers. The road was very unsafe and it took more than an hour.

But no one’s getting treated there any more. MSF maintains a small clinic in the city that offers basic health services, but its hospital lies in ruins. There are no plans for it to reopen. It’s too dangerous, and MSF can no longer rely on guarantees of protection for its staff. So once again, in Kunduz and surrounds, routine life-saving medical procedures are unavailable. The child who now can’t get his appendix removed; the mother who dies in childbirth; the old man whose infection turns fatal, they too are victims of the October 3 bombing.

“What we’re seeing nowadays is that wars have become completely different from what we’ve known them to be. They are fought with total disregard for international humanitarian law,” says Karsten Noko, the vice-president of the board of MSF Southern Africa.

Along with others in the organisation, he has to decide when it is safe to send MSF fieldworkers into war zones. That risk assessment is getting harder and harder.

From January 2014 to December 2015, the World Health Organisation recorded 594 attacks on healthcare facilities in conflict zones all over the world. In 2015, MSF suffered 75 attacks on facilities that it either operated or supported. Kunduz was the highest-profile, but by no means an exception. This year, there have already been another 38 on MSF facilities.

These attacks aren’t just coming from terrorists or rogue militias, who might be expected to flout international norms.

“Four of the five permanent members of the United Nations Security Council are either directly involved or complicit in these attacks that we see. There is no political will on their part to stop the bombings on hospitals,” said Noko. The United States is involved in Afghanistan, and along with France and the United Kingdom supports the Saudi-led coalition in Yemen, which has repeatedly bombed medical facilities. The Russians are supporting the government in Syria, and its air strikes have also targeted hospitals and clinics.

These are attacks on international humanitarian law, the implications of which go far beyond specific conflict zones. The interventions of organisations like MSF only work if they receive some degree of protection from the belligerents on a battlefield; as that protection erodes, so does their ability to save lives during times of war.

Along with the world’s superpower, the United Nations is also culpable. Far from protecting humanitarian actors, it has shown itself in recent times to lack either the will or ability to do so. Just two months ago, UN peacekeepers in Juba, South Sudan ignored desperate requests for assistance from an expatriate compound that had been invaded by members of the Presidential Guard. Aid workers in the compound were assaulted, tortured and gang-raped over the course of several hours.

All over the world, humanitarian work is becoming more dangerous. Hospitals are being bombed, aid workers are being targeted, and the protections upon which humanitarian organisations rely are evaporating. This will make all humanitarian interventions riskier, rarer and more expensive.

Luckily, there are still people willing to risk their lives to save others in war zones. People like Jonine Lotter. Although she still bears the emotional scars of her experience in Kunduz, she followed that up with a six-month mission to Bor in South Sudan. And she plans on another one.

Photo: An interior view of the MSF Trauma Centre, 14 October 2015, shows a missile hole in the wall and the burnt-out remains of the the building after a sustained attack on the facility in Kunduz, northern Afghanistan.