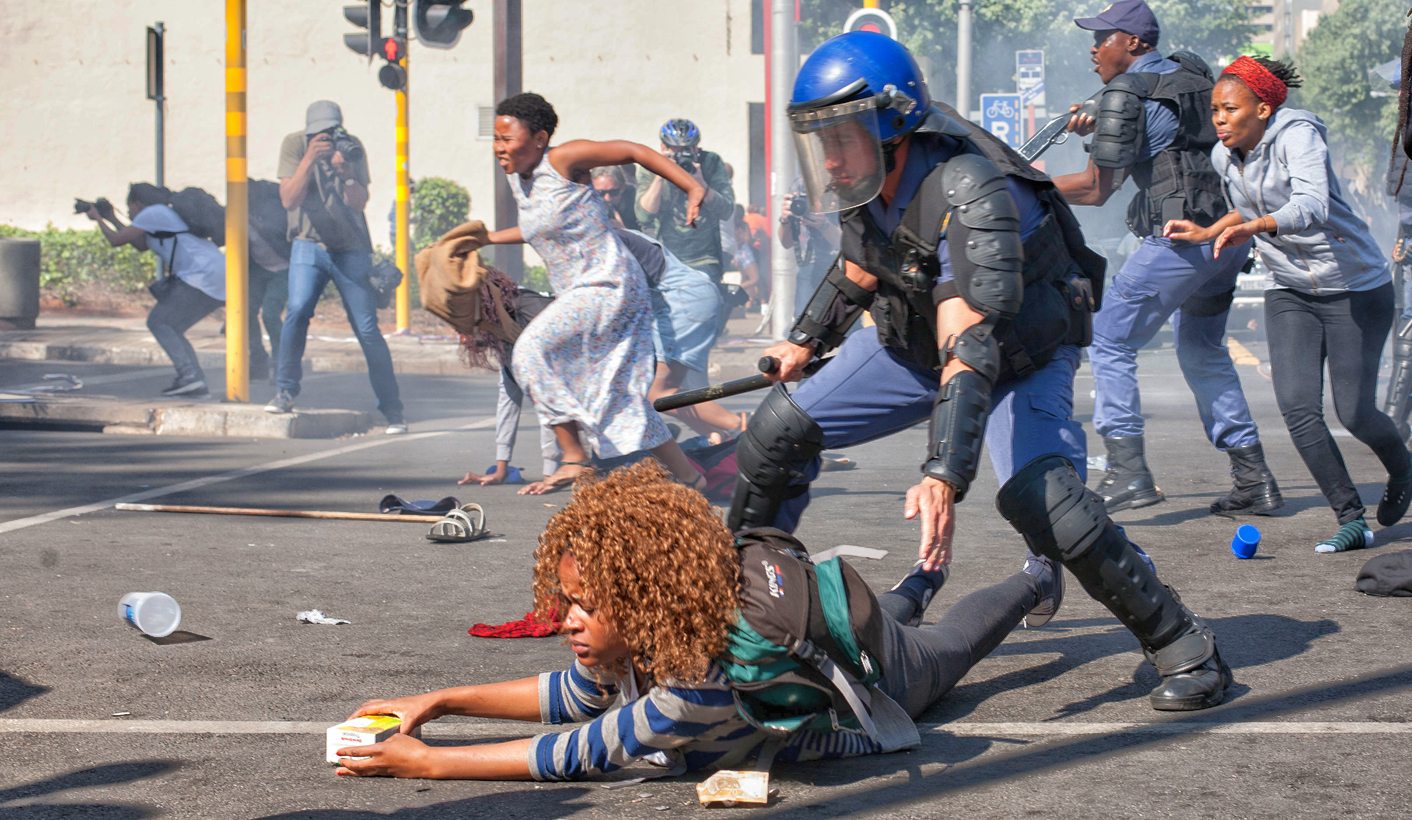 Universities face intense pressure to reopen while a significant number of students want to push ahead for the demand for free education. President Jacob Zuma will on Monday engage students and other stakeholders. What happens next is still in the balance. By GREG NICOLSON

The 2016 Fees Must Fall protests could come to a head on Monday as some universities have said it’s one of the last days to either resume studies or suspend the academic year, but President Jacob Zuma has probably reduced confrontations, at least for a day, by calling a Monday imbizo for stakeholders to provide solutions to the higher education impasse.

Fasiha Hassan, secretary general of the SRC at Wits, which has been a key point of protest, said a free education model from students, along with experts who have been consulted, would be presented to Zuma and Higher Education and Training Minister Blade Nzimande at the imbizo. It would look at funding from the state, private sector, the skills levy and a wealth tax, she said, amounting to R60-billion.

Widespread student protests have continued across the country for almost two weeks, leading to many institutions suspending their academic programmes. Zuma’s imbizo comes as protesting students’ attitude towards demonstrating for free education appears to be hardening, while efforts from the public, institutions and Cabinet’s security cluster to keep universities open and isolate protesting students are also growing.

The Presidency said the meeting would “seek the wisdom of all sectors including parents, students, business and labour, to seek solutions, given that education is a societal issue”.

“We did what the commission couldn’t do,” said Hassan on the planned proposal for free education and the commission of inquiry into the feasibility of free higher education. She said students could not wait until mid-2017 when the inquiry’s report is due for release.

Demonstrating students have lost public support as detractors point towards violence on campuses, often painting all students with the same brush, and other students voice concerns about interruptions to their studies.

The different interests were represented at Wits last week, which on Thursday held a poll on whether it should resume classes. Wits said 16,739, or 77%, of students wanted the academic programme to resume on Monday if there was adequate security; 4,991, or 23%, of students voted against the yes or no SMS question. There were a total of 21,730 responses after around 37,000 SMSes were sent asking if students wanted the academic programme to resume if there was “appropriate security” in place. The interim results were audited by SizweNtsalubaGobodo. On Sunday the university said only staff would return on Monday, while the full academic programme would continue on Tuesday.

Wits has been closed for almost two weeks after students began demonstrating when higher education minister Blade Nzimande announced recommendations on 2017 fee increases two weeks ago. Protests for free education have spread to university campuses across the country, leading to many institutions suspending classes after witnessing clashes between students, police and security guards, as well as claims of intimidation and destruction of property. Wits announced it would poll students after receiving complaints from students and parents who wanted classes to continue.

“The interim results of the poll indicate that the significant majority of students want the academic programme to resume on Monday,” said Wits in a statement. “The results of the poll as well as feedback from parents, alumni and other stakeholders will inform management’s decision-making. Management will also reach out to the student leadership, unions and other stakeholders to engage on a way forward.” Around 58% of students responded to the SMS poll, which was free.

Wits Vice-Chancellor Adam Habib last week said the university was “reaching a point of no return” and if it did not open in the next few days it would have to implement a full closure, including its residences, which would have a negative impact on studies as well as the university’s public services, such as its medical facilities. Habib said Wits’ fate should not be determined by a small group of students, in relation to the whole student population.

“Firstly, the poll is to gauge sentiments, and any sensible manager and executive does try to gauge sentiment and understand the environment before making decisions. And that’s what we as an executive are doing,” he said. University of Cape Town’s Vice-Chancellor Max Price made similar make-or-break comments.

Protest leaders and the Wits SRC rejected the poll, originally pitched as a referendum, but which was later defined as a poll to help inform university decisions. A last-minute SRC attempt to get a court interdict preventing the poll, arguing the university did not have the power to proceed, failed on Wednesday night.

On Thursday, the Wits SRC called the poll illegitimate and said the university should instead discuss issues of free education, academic matters, and workers’ issues in a university assembly.

“We further argued that a Wits referendum cannot be used to determine a political solution on a national issue such as free education. On a more superficial level, this online referendum favours privileged students with access to wi-fi, airtime and computers; while at the same time the university has closed off all these resources,” it said.

“We will reject any effort to use the poll to justify the forced reopening of campus. The university has clearly stated that they intended to use the referendum to justify the use of force from the police and private security,” said the SRC. “We have witnessed grotesque scenes of police and private security brutality on our campus and at other universities around the country. In light of this, we view the suggestion by the Wits management that they will use ‘security protocols’ to reopen campus as irresponsible and provocative.”

The Wits SRC later pointed out that the poll was insufficient to determine a view on free education. It called for working-class leaders to continue the fight.

Universities South Africa has estimated university protests over the last year have caused over R600-million in damage, while there’s also a fear that protracted protests and closure will hinder research programmes. A petition signed by around 100 University of Cape Town (UCT) law students calling for the university to resume classes explained some students’ concerns: “Those of us who cannot afford to remain in Cape Town beyond 2016 will not be able to finish their studies. Students’ employment or postgraduate opportunities in 2017 will be jeopardised. The process of having to delay exams‚ or relearn material‚ will cause immeasurable stress and anxiety for students.”

UCT students wanting the university to resume its academic programme staged a silent protest on Friday.

The Democratic Alliance (DA) last week started an online petition for campuses to open, calling on “those who have been silenced to speak out against the criminal capture of what is an important and legitimate cause”.

Economic Freedom Fighters spokesperson Mbuyiseni Ndlozi said the DA’s petition was lazy and effectively called on police to deal with protesters. He compared it to Lonmin’s response to striking mineworkers in Marikana. On Friday, the DA’s petition had gathered slightly more than 12,000 names.

On Sunday, Wits said the resumption of the academic programme would include increased private security and police on the campus perimeters. Broadly supporting opening up access to education and transformation, Wits said, “We are willing to consider withdrawing private security and the police if the protesting students undertake not to impinge on the rights of those who wish to learn and work.”

The resumption of studies, which will include increased levels of security on campuses, runs the risk of raising the stakes and forcing students into even more confrontational methods of protest. Cabinet’s security cluster has suggested that a police and intelligence crackdown against protesters is coming.

Hassan said Wits students are trying to give intellectual backing to their demand for free education and they hope this week will see some sort of an agreement from the state on the way forward.

“If after this we’ve not been listened to I don’t know what more there is to do,” she said.

She said there are discussions on tactics under way, including targeting national departments and institutions, but Hassan also said students get leverage, their only leverage, from shutting down campuses.

Wits is just one example, but if government fails to listen to students and they remain united and determined in their demand for free higher education, while universities increasingly call on police and private security guards to quell protests, the current demonstrations could escalate with heightened levels of violence from both sides. DM

Photo of the Wits violence by Greg Nicolson.