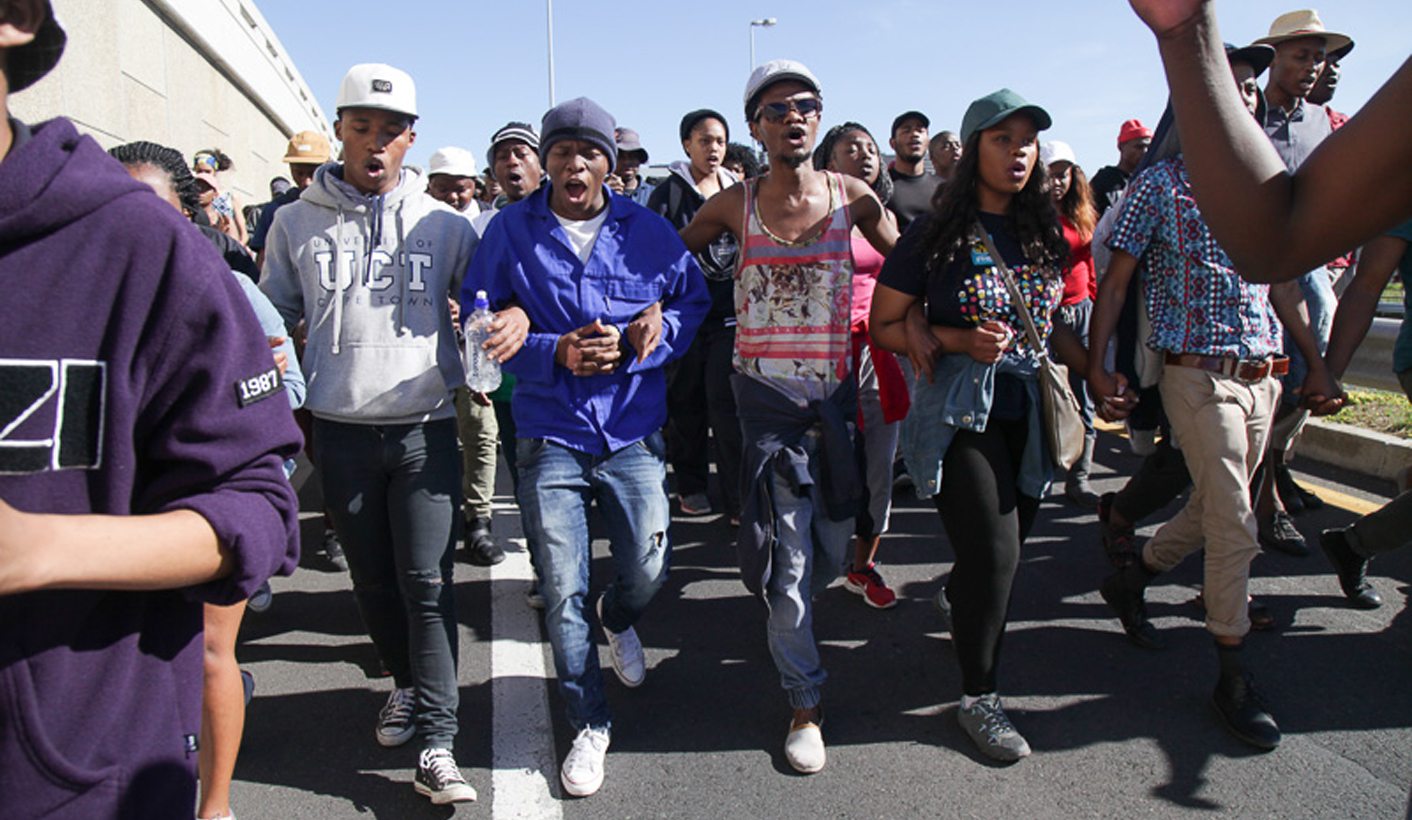 Campus blocked, classes disrupted and no clarity on what happens next. By GROUNDUP.

In the early morning, from at least 6am, protesters blocked the main entrances to the University of Cape Town (UCT).  There were a few police and private security officers  on hand but they did not make any serious attempt to break the blockade of campus. On two occasions a barricade across the main road entering campus was taken down by private security officers, but within minutes it was back up.  As the morning proceeded cars attempting to enter campus were turned  around by campus protection officers.

Late last night vice-chancellor Max Price sent an email to the UCT community saying that a mediation process with the protesting students “concluded without resolution”. Price wrote: “We are therefore faced with the following choice: opening the university with the necessary security or compromising the academic project for the rest of the year.” He said that  UCT would  be “fully open” on Monday. “We will use the minimum private security required to ensure the safety of all students and staff.”

At about 6:30  am two computer science students who tried to walk up an embankment to get to their department were threatened by a protester: “There will be a bigger problem for you if you go inside.” However, eventually many students did manage to find their way to University Avenue, the  location of  UCT’s main lecture theatres.   Many waited outside their lecture theatres. A despondent physics student said to GroundUp: “I just want to do my degree.”

When a GroundUp reporter tried to get close to the protesters to take a photograph, they warned her to go away.

As lectures started, protesters set off building alarms and entered lecture theatres, singing. Many lectures had to stop, though some resumed when protesters left. The libraries were closed and the university’s student transport system, the Jammie Shuttle, was not operating.

At the same time as much of this was happening, about 150 protesters marched from Observatory to UCT’s School of Public Health (medical school), where they recruited more people. Led by suspended UCT student  Masixole  Mlandu, they marched along the M3 highway to upper campus, joined the other protesters and moved from one classroom to another across the university, singing and bringing lectures to a close. Mlandu addressed the protesters a number of times. He said:  “Sacrifices must be made in the restructuring of this university … We do want to open a university but it must  be a free and anti-colonial university that is acceptable to all  people of this country.   We don’t want to open up a university that privileges a minority so that it goes on a holiday to Mauritius.”

It is difficult to accurately estimate the number of protesters who were on campus, but it appears to have been in the region of 300 once the protesting groups merged, and this was also the estimate of a campus protection officer who spoke to GroundUp.

On Monday afternoon UCT released a statement saying:  “Six people were arrested for disrupting a lecture …  The six were warned that their actions were unlawful and that they should leave the premises. They refused and were arrested. They were taken to a police station and charges are being laid. If they are found to be UCT students, disciplinary action, including possible suspension, will follow.”

Photo: A group of students gathered to pray early morning, near where protesters blockaded the northern entrance to UCT. (Photo: Ashraf Hendricks)

The statement further said that the UCT executive was attempting to manage the situation on campus with a joint operations team that included the Campus Protection Services and SAPS.  “Our intention is to use security as a last resort in all cases.”

Price urged staff and students to “continue operations as best they can and to avoid situations of conflict.” DM

Main photo: Protesters marched from Observatory to UCT’s medical school, then onto the M3 highway and onto upper campus where they disrupted classes. Photo: Ashraf Hendricks