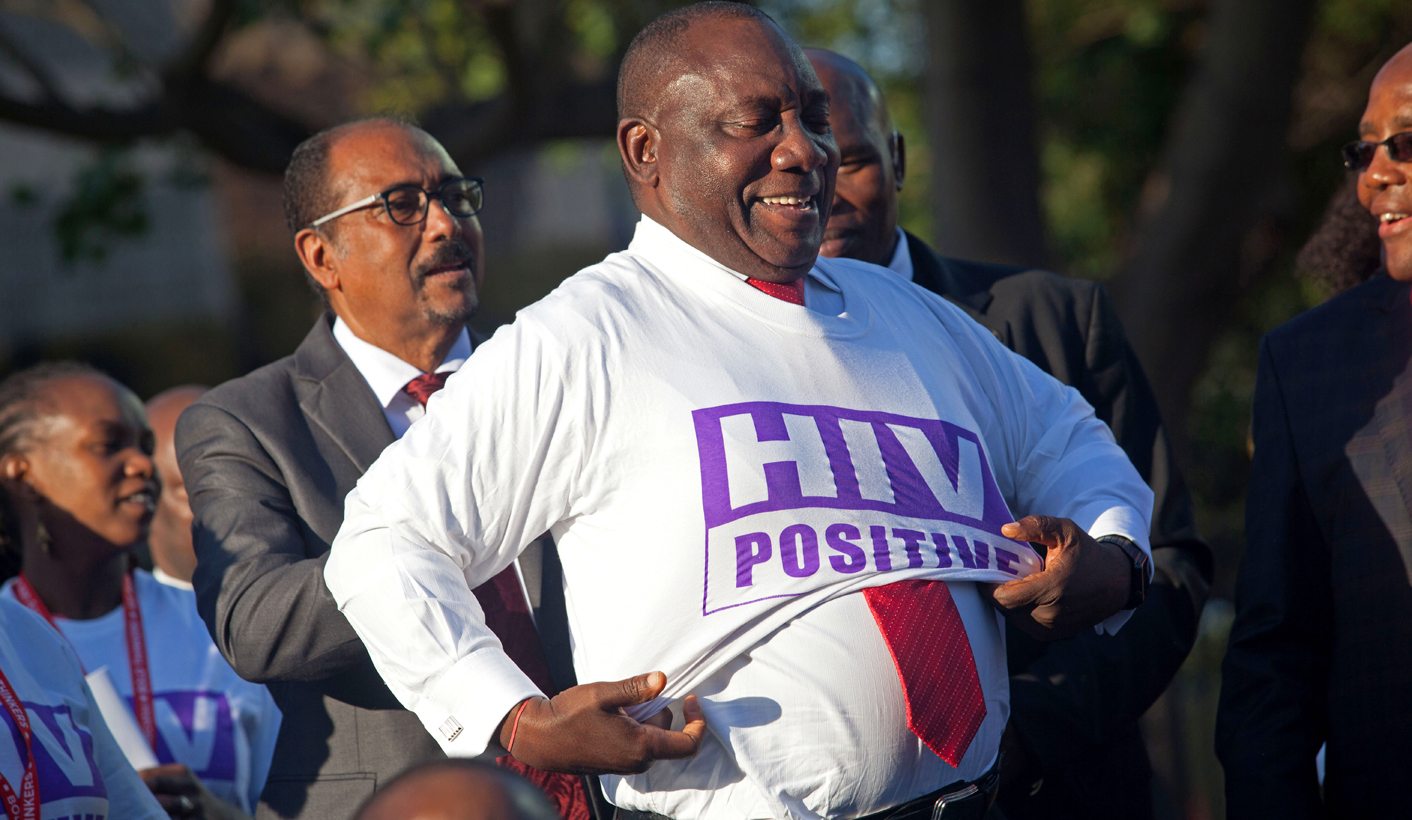 I am writing this letter to you in your capacity as the chairperson of the South African National AIDS Council (SANAC), as it reaches a crucial stage in the development of the next National Strategic Plan (NSP) on HIV, TB and STDs.

Deputy President, a few days ago I received the following text message from a friend:

“Two funerals today of family/friends that died of AIDS. One kept it secret from the family; found CD4 results under mattress of 34. She attended a church that preaches believers don’t take ARVs. In the other case, he defaulted on treatment and died. Late 40s/early 50s. Free State and Limpopo.”

This sad message probably indicates something we would rather not consider, that there are again a growing number of people dying from AIDS and TB – despite the availability of antiretrovirals. Statistics reveal to us that a high proportion of adolescents are dying of TB and HIV, both diseases that can be prevented and either cured or managed. I hear that the rates of vertical HIV infection (Mother to Child transmission during and after birth via breastfeeding) are higher than we admit. These facts point to the heart of the challenges we face, challenges that must be brought to the fore as SANAC, under your leadership, finalises a new strategic plan on HIV for the next five years.

This will be our country’s fifth national AIDS plan since democracy. It is certainly the most critical. This is the do-or-die plan. Literally. I’ve been involved in all five so please allow me to reflect on why this one is so important.

The first plan, drawn up by the National AIDS Convention of SA (and known as the NACOSA plan), covered the years 1994-1999. It was drafted with the full involvement of civil society and in close co-operation with ANC leaders. It was strong on human rights, but did not include ARV treatment because in 1994 treatment was unproven. It failed not because it was not a good plan, but because tragically it coincided with the first years of our liberation. Our nation had other pressing priorities. There was little political will to implement it.

The second 2000-2005 one was a poor plan. It was largely ignored; that was the period of AIDS denialism, the period of Manto Tshabalala-Msimang and Thabo Mbeki, a time when SANAC was chaired by a disinterested then Deputy President Zuma. SANAC was so dysfunctional we didn’t even bother with it.

The third NSP, 2007-2011, was the plan that broke the back of AIDS denialism. It was ambitious and expansive, it set a target of “appropriate packages of treatment, care and support to 80% of HIV positive people and their families by 2011”, it strengthened programmes to prevent mother to child transmission, it introduced the idea of a programme of voluntary male circumcision. NSP 2007-2011 was an omnibus, a bumper edition. It had to be. It was strategically necessary to pack it with every programme we knew had some efficacy because AIDS denialism had placed us seven years behind the AIDS epidemic and there was total disarray in the national response.

However, to be honest, NSP 2007-2011 wasn’t very strategic. The strategic focus came from something that is not even mentioned in the plan; it was the Treatment Action Campaign’s (TAC’s) mobilisation to popularise the plan and to focus the government to continually expand access to ARV treatment that made sure it remained relevant to the national discourse. It was the health workers who were desperate to start saving lives again.

The fourth plan, 2012 to 2016, is about to expire. Nobody will miss it. Very few people knew about it in the first place. It was too complex, too unfocused. It came out of a process, much like the one going on at the moment, that allowed everyone to throw in their pet project and didn’t distinguish clearly enough what were the priority projects. It dodged the difficult issues. Cabinet’s only contribution before it approved it in late 2011 was to delete a firm commitment to decriminalise sex work from the plan. Are you therefore surprised we have such high rates of HIV among sex-workers?

In recent months an extensive consultation has taken again place about the next NSP. However, I would strongly recommend to you that now you entrust the development of the plan to an expert team. Their job is to distill the ideas, insights and learnings they have heard, into a strategy. They must do what they must do – but my unsolicited advice to them would be as follows:

Keep it short and simple. We can’t afford another 500-point strategy that’s read only by experts and which is unintelligible to the people who need to know the plan.

Avoid jargon: avoid reference to UNAIDS’ confusing jargon that means NOTHING to an ordinary person – and actually causes confusion. ‘Test and Treat’, ‘Treatment as Prevention’, ‘Decanting’, ‘90-90-90’, ‘Getting to Zero’, ‘KPs’, ‘VPs’ and ‘MSM’ and so on ….

Keep it focused: leave things out rather than stuff everything in. In my view a strategic Strategic Plan should now focus all its efforts (or rather our efforts) around two keys questions:

To address these two challenges, Deputy President,, you have been entrusted to provide leadership. You must force us to square up to the things that can’t be said. You must help us to do the things “that can’t be done”. They can.

We must throw the kitchen sink at these two critical challenges and leave the rest to take care of itself. We can do this because many of the other necessary programmes and activities of the AIDS response are now reasonably well entrenched. The message is that they must continue.

So what could we do about prevention? There are 25,741 schools in our country. These should be the sites where we concentrate the struggle against HIV. We should say that within six months every school should offer continuous quality sexuality education, especially about gender and sex, voluntary circumcision, male and female condoms, Pre Exposure Prophylaxis (PreP, but please don’t call it that), HIV and TB testing, access to HIV and TB treatment and support for adherence.

If we did this, we would win.

So what could we do about treatment? There are 3,182 clinics and 331 Community Health Centres (CHCs) in our country. These need to be the sites of our struggle against AIDS and TB, co-ordinating salvoes into schools, shebeens, churches, football clubs, burial societies. But to do that they need better management, empowered clinic committees, resources, and properly employed, paid and supervised community health workers as the backbone of ward based outreach teams.

Is this impossible? No it is not. Would it make a difference? Yes, it would.

And finally a word of warning, or rather exhortation. There are a number of risks that we must counter.

The first is that many of those who represent “civil society” in SANAC and Provincial AIDS Councils are pretenders, they are out of touch and disconnected from real people, they are their own insular civil society, they have formed a world in a parasitic ecosystem. If these people continue to guard the gates of the AIDS response, we are in trouble. You, DP, need to once more insist on accountability and evidence, volunteerism and sacrifice.

Measure people by their actions, not their words.

Finally, a special appeal. We can’t implement the NSP outside of the public health system. And here’s the rub: at the moment the NSP is being cooked without any reference to the desperate state of our clinics, hospitals or the exploitation of our health workforce. This might seem odd, but my guess is that hardly any of the people busy making proposals about the NSP or being consulted about it either have HIV or have HIV and use the public health system. This means that they do not appreciate the obstacles created by drug stocks, poor quality information, rushed HIV testing, treatment illiteracy from the treaters. It is half-true that AIDS “is not a health issue”. But without a solid health system, the response has no backbone. At the moment that backbone is broken.

It does not need to be part of the NSP, Deputy President, but it is critical that we empower Health Minister Aaron Motsoaledi to fix the health system in the provinces.

Deputy President, AIDS is not over. Millions of lives depend on your leadership of this process. Please get it right. DM

This letter was first run in Spotlight.