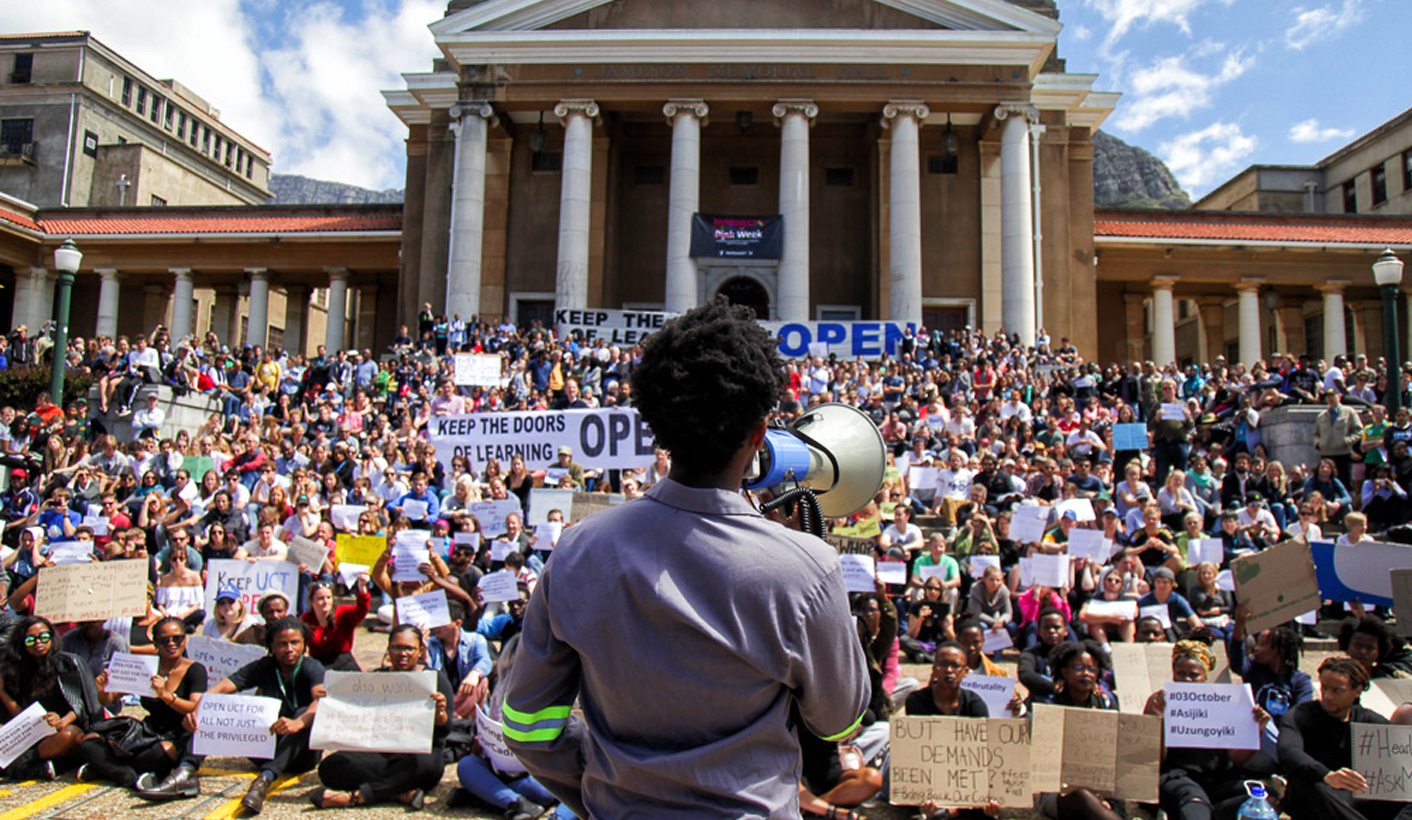 About 100 #FeesMustFall students continue to call for shutdown. By GROUNDUP.

Thousands of students and staff heeded a call, started on WhatsApp, to sit down for an hour and read in silence on the steps of the University of Cape Town (UCT) upper campus. Behind them was a banner stating “Keep the doors of learning open”. They have one demand: that UCT should be open on Monday 3 October.

A few minutes after the silent protest started, a group of about 100 #FeesMustFall protesters. who earlier had been protesting outside the university administration offices, marched up the steps and stood in front of the bulk of the silent protesters. They sang and made speeches through a megaphone, insisting that the university cannot open next week.

The atmosphere remained calm throughout. After about a half-hour, the #FeesMustFall protesters left.

Saif Khan is a third-year science student hoping to graduate this year, and one of the organisers of the silent protest. He is also the chairperson of the Science Students Council. He told GroundUp: “The aim is not to go against the [#FeesMustFall] protests. We want campus to start on 3 October. We want management to resolve this.” Before the silent protest began, he said that he hoped the #FeesMustFall protesters would join the silent protest and for all students to communicate with each other. “We want students who haven’t had a voice to come and express themselves,” he said.

Nicola Illing, who teaches biochemistry and genetics, said that last week protesters disrupted a prac she was running for second-year students. She explained that setting up a genetics prac is expensive. The protesters set off fire alarms in the building. She and her students were not sure why the alarms went off. So, taking no chances, they evacuated the building. At the entrance protesting students told people to leave. Illing and her students however found a back entrance into the building and resumed their prac. The next day protesters disrupted a lecture she was giving three times. They danced on the desks on the third occasion. But she and her students did not move and eventually the lecture was able to continue.

Most of UCT was closed this week because of the #FeesMustFall disruptions classes and forced academic staff to leave their offices. There is a growing call by UCT students and staff for the institution to open on Monday and for the academic year to complete. Earlier this week the science faculty held a poll. About 80% of those who participated wanted the university to remain open. Fewer than 10% of respondents voted against reopening (More voted for “unsure”).

Over 100 students in the law faculty  have signed a petition  calling for the university to stay open. The petition acknowledges “the importance of many of the issues raised by this year’s protests” but warns that cancelling the remainder of the academic year “would have dire effects on many (if not all) UCT students”.

“Those of us who cannot afford to remain in Cape Town beyond 2016 will not be able to finish their studies. Students’ employment or postgraduate opportunities in 2017 will be jeopardised. The process of having to delay exams, or re-learn material, will cause immeasurable stress and anxiety for students. UCT will suffer significant financial losses, from which it may never fully recover, limiting current and future students’ academic opportunities. Ultimately, many of the issues highlighted by the protests, such as accessible, decolonised education, or better working conditions for UCT workers, will be severely undermined by an indefinite suspension of the academic project.

For these reasons, we object in the strongest possible terms to postponing indefinitely the academic year. We demand that lectures and other academic activity resume by no later than 3 October 2016. We will refuse to accept the cancellation of the academic year.” DM

Main photo: A #FeesMustFall protester addresses thousands of UCT students and staff who want the institution to reopen on Monday. Photo: Ashraf Hendricks