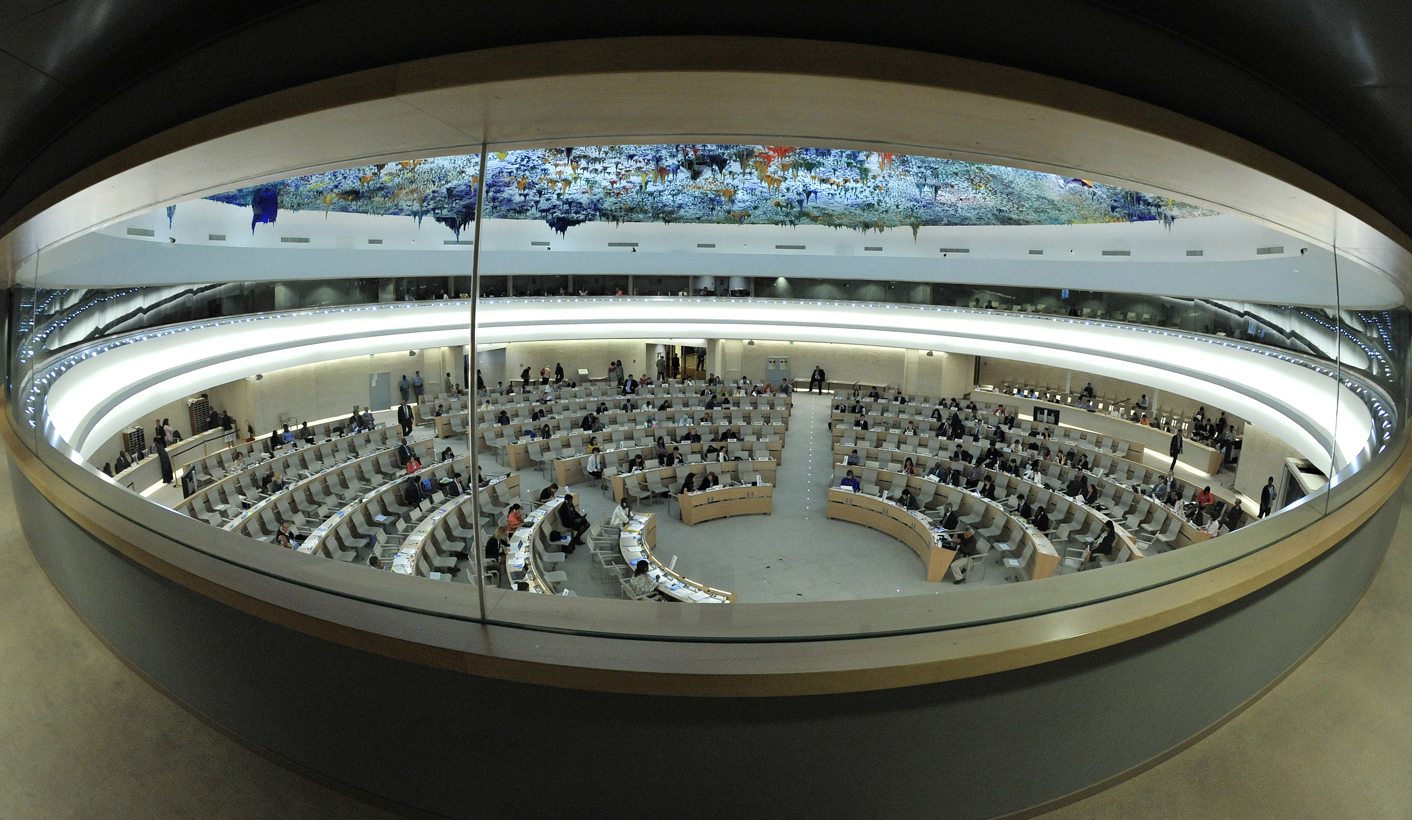 As the UN Human Rights Council prepares to vote this week on a potentially life-saving progressive Maternal Mortality and Morbidity resolution that will affect billions of women, it’s the last chance for South Africa to reflect on its role as its current term draws to a close. If it opts to align with Russia’s conservative stance, it may undo much of its earlier good. By MARELISE VAN DER MERWE.

As the 33rd session of the Human Rights Council continues in Geneva, delegates have been negotiating a key resolution expected to be deposited on Thursday and voted on by the end of the week – a resolution on maternal mortality and morbidity, which could impact some 830 preventable deaths related to pregnancy and childbirth each day.

On Wednesday September 28, which also marked the Global Day of Action for Safe and Legal Abortion, the UN spoke out against countries that still prohibited termination of pregnancy or had restrictive laws. According to a UN statement issued by the Office of the High Commissioner, in the 21st century, unsafe abortion is one of the leading causes of maternal mortality and morbidity. World Health Organisation (WHO) data adds that about 22-million unsafe abortions take place each year worldwide, with an estimated 47,000 women dying annually from complications resulting from the resort to unsafe practices for termination of pregnancy.

“Criminalisation of abortion and failure to provide adequate access to services for termination of an unwanted pregnancy are forms of discrimination based on sex. Restrictive legislation which denies access to safe abortion is one of most damaging ways of instrumentalising women’s bodies and a grave violation of women’s human rights,” the UN statement read. “The consequences for women are severe, with women sometimes paying with their lives.”

Restrictive laws apply to about 40% of the world’s population; in these circumstances, women who seek abortions or even medical care after miscarriage may be subjected to prosecution or imprisonment. Experts from the Committee on Economic, Social and Cultural Rights (CESCR) said earlier in 2016 that “the full enjoyment of the right to sexual and reproductive health remains a distant goal for millions of people, especially women and girls, throughout the world.”

PP6 Taking note of the Secretary-General’s renewed Global Strategy on Womem’s, Childrem’s and Adolescents’ Health, and recognising the important role it may play in the realization of sexual and reproductive health and rights and reducing preventable maternal mortality and morbidity…

PP8 Stressing that reducing maternal mortality and morbidity in accordance with human rights obligations and commitments will require efforts across the 2030 Agenda, and the Addis Ababa Action Agenda of the Third International Conference on Financing for Development…

More worryingly: It is not clear how South Africa will vote when these amendments are tabled. Carrie Shelver, Advocacy Manager for the Coalition of African Lesbians, told Daily Maverick from Geneva that she was disappointed in what she had witnessed thus far.

“It’s absolutely atrocious to hear South Africa again saying things like they don’t support language of a ‘human-rights based approach to maternal mortality and morbidity’ or protecting the language of ‘sexual and reproductive rights’,” she said.

“South Africa repeatedly defends its poor voting and negotiation record on SRHR issues by saying that the language that is put forward is not ‘agreed language’, even if the language eventually adopted in the resolutions fall well beneath the standards of the South African Constitution and legal frameworks.”

Other activists have expressed deep concern about the implications for women both locally and internationally. Human rights experts Alda Facio, Chair-Rapporteur of the Working Group on discrimination against women in law and in practice; Dainius Pûras, Special Rapporteur on the right of everyone to the enjoyment of the highest attainable standard of physical and mental health; and Juan E. Méndez, Special Rapporteur on torture and other cruel, inhuman or degrading treatment or punishment, spoke of the futility of conservative regulations. Prohibition does not reduce the demand for abortions, they argued, but merely increases the associated risks.

It’s particularly important for South Africa to come to the party, as it were, during this session. The country’s membership expires at the end of December 2016, so it’s a key time to consider the legacy left behind by the democratic government. In terms of gender equality, says chairperson of the Sexual and Reproductive Justice Coalition Marion Stevens, it’s not looking good, gender equality having backslid somewhat. “Maternal mortality actually decreased quite a bit after 1994,” she told Daily Maverick.

But that trend is turning around, amid a subtle shift towards conservatism in the national department of health. Health Minister Aaron Motsoaledi, for example, (in)famously remarked that young girls were using abortion as contraception, also bemoaning the national abortion rate. Yet a petition by the Sexual & Reproductive Justice Coalition views the matter differently, arguing that too many women still cannot access legal abortions safely. Daily Maverick earlier reported that less than half of abortion facilities that are meant to be offered are actually operational.

Not enough is being invested in sexual and reproductive health, especially in South Africa, despite laws that are progressive on paper, believes Stevens, citing the recent example of a young woman arrested in Athlone over an illegal abortion – which Stevens believes may have been averted had better access to education been available. Under these circumstances, the illegal abortion business is booming, with catastrophic results. “Government expects NGOs to do the work,” Stevens says. This week’s vote in Geneva may function as a litmus test of sorts: whether South Africa is willing to continue the good work begun after 1994.

“South Africa previously took an approach somewhat influenced by social development,” Stevens notes. “Then there was the failure to support the LGBT resolution, and now things are completely falling apart. Really, there are increasing geopolitical influences. South Africa has always sided with BRICS nations, but did stand up for human rights in a commendable manner. Unfortunately, we have absolutely capitulated.”

Social Justice Advocate and Sexual Health Activist Nomtika Mjwana, who presented in Geneva, argued that South Africa was obliged in terms of the Constitution, domestic legislation and policy to support the protection of women’s sexual and reproductive health as a human right. “South Africa’s 1996 Constitution, which is the supreme law of the land and that which gives state its mandate, is the most explicit, and guarantees everyone the right to make decisions concerning reproduction, and to security in and control over their body,” she said.

The Constitution also made provision for the right to privacy, the right to educational information to help and ensure the well-being of family, as well as the right to healthcare, she added.

Investing in sexual and reproductive health is not simply a moral imperative. The Economist reports that the unrealised economic potential of women – particularly in developing countries – could have a major impact on GDP. Some 1-billion women were expected to enter the workforce between 2012 and 2022. Contrast this data against maternal mortality and morbidity data: According to the Sexual Rights Initiative, 99% of maternal deaths occur in developing countries, with a lifetime risk of maternal mortality of 1 in 41 for low-income countries. Complications during pregnancy and childbirth are the second-highest cause of death for 15 to 19-year-old girls globally, which adds up to a major dent in their lifetime economic contribution.

But despite its potential impact, whether the resolution will be adopted remains to be seen. In the meantime, progressive voices are calling, urgently, for South Africa not to align with Russia, Bangladesh, Iran and other states hostile to the protection of women’s sexual and reproductive rights.

South Africa is not fighting to uphold its own standards, Shelver argues. “South Africa obviously does not see its role as defending the language – or rights – in the Constitution, and in doing so advancing the rights of all, through pushing international agreed language to be in line with South Africa’s Constitutional and legislative language,” she said. DM