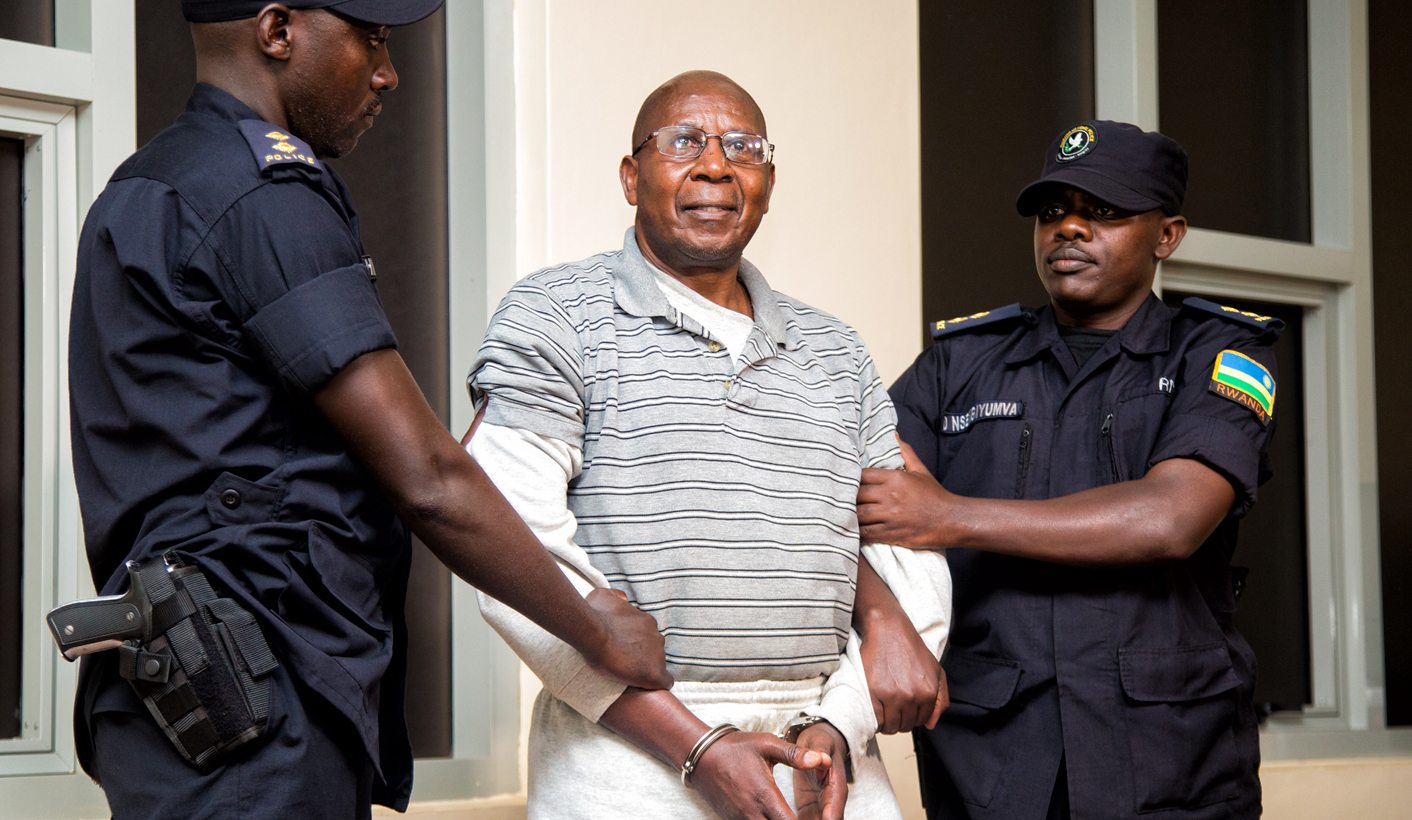 Like so much else related to the Rwandan genocide, the history of Léopold Munyakazi is bitterly contested. Is he a war criminal with blood on his hands, responsible for organising death squads and inciting killings? Or is he an innocent academic whose real crime was to dare to differ with President Paul Kagame’s official narrative? After finally being deported back to Rwanda, his trial may provide some answers. By SIMON ALLISON.

No sooner had he stepped off the plane in Kigali on Wednesday evening than police officers slapped handcuffs on Dr Léopold Munyakazi. These were for dramatic effect, for the benefit of the waiting photographers, but Munyakazi seemed unfazed. “It’s all right. Hold me slowly because I am an old man,” he told the officers, and as he walked past the cameras he smiled broadly and gave a double thumbs up.

The 65-year-old Munyakazi is wanted for his role in the Rwandan genocide, during which an estimated 1 million people were killed in three months of bloodletting. The Rwandan government believes that he is a war criminal, and has sought his extradition from the United States for a decade. He has also been accused of being a genocide denialist. After exhausting every avenue of appeal, Munyakazi was finally deported this week after the Fourth Circuit Court of Appeals determined that he would not be at risk of torture in Rwanda. His trial begins in 10 days.

“The National Public Prosecution Authority of Rwanda guarantees a fair trial to Munyakazi in accordance with national legislations and other international instruments ratified by the Republic of Rwanda,” said Prosecutor-General Richard Muhumuza shortly after Munyakazi’s arrival in Rwanda.

Prosecutors allege that Munyakazi was part of a group of intellectuals who designed and disseminated the rabid anti-Tutsi ideology that underpinned the genocide. He is also thought to have played a major role in planning mass killings in Kayenzi town, in Muhanga District. The prosecution has witnesses who will testify that Munyakazi manned roadblocks where Tutsis were identified to be killed, and personally killed at least one person, identified as Félicien Ugirashebuja.

Rwanda’s evidence was strong enough for the United States to conclude that Munyakazi does have a case to answer, and therefore to grant Rwanda’s extradition request. But the case against him is far from straightforward.

In the months after the genocide, Munyakazi was arrested in Rwanda and, along with thousands of others, spent five years in prison without charge. But he was eventually released, without going through any formal judicial process: not the community-based Gacaca system, not the international tribunal, not Rwanda’s own courts. Was this simply judicial oversight, his case lost in the chaos of the era, or did the government not think him worth prosecuting then?

Munyakazi then went to work as a civil servant; he was given a passport, and travelled freely. In 2004, at a conference in the United States, he heard that he was under suspicion at home again, and successfully appealed for asylum. It was only several years later, however, that Rwanda formally sought his extradition, and Munyakazi argues that this had nothing to do with his alleged role in the genocide. Instead, it was in response to his increasingly outspoken analysis of how and why the genocide happened – an analysis that contradicts the accepted wisdom of how the genocide unfolded.

“There is a kind of international conspiracy to hide the truth about what happened… I refer to it as civil war, not genocide; it was about political power… In Rwanda there are no tribes; there are social groups… It [is] quite wrong to say that genocide was committed by Hutus,” said Munyakazi, in a 2006 speech at the University of Delaware. Munyakazi argues that the fault-lines were about class than ethnicity.

In modern-day Rwanda, such sentiments are more than a mere academic disagreement. Paul Kagame has built his country on the narrative that Tutsis were massacred by Hutus in an attempted ethnic cleansing. His regime is premised on the idea that the genocide can never be allowed to happen again, and that only it can prevent a repeat performance. So if the genocide didn’t happen the way that Kagame said it did, then the government can no longer use the genocide to justify its excesses, such as the suppression of free speech and opposition.

“The precise nature of the 1994 violence is not just a matter of historical debate in Rwanda but a live political issue, since the current president, Paul Kagame, has built his reputation on the claim that through his leadership a nation of irreconcilable ethnic groups has been, miraculously, reconciled. Deviation from that line is dangerous.

“‘They just want to muzzle me’, Leopold told me, calling the attempted prosecution a witch hunt,” explained Sanford Ungar in a fascinating New York Magazine investigation. As president of Goucher College, where Munyakazi was employed, Ungar found himself caught in the middle of Munyakazi’s case, but entirely unable to unravel its ambiguities.

Is Munyakazi a war criminal? Is he being persecuted for his opinions? Is it both? His trial should provide at least some answers – although maybe not, as Rwanda’s judiciary is not renowned for its independence. But really, what’s at stake is bigger than just one man. History itself is in the dock, and the verdict will inevitably shape Rwanda’s future. DM

Photo: The National Police Rwanda presenting Genocide suspect Dr Leopold Munyakazi to the media before he was taken for an interrogation at the airport. (Photo: Faustin Niyigena, New Times Rwanda)