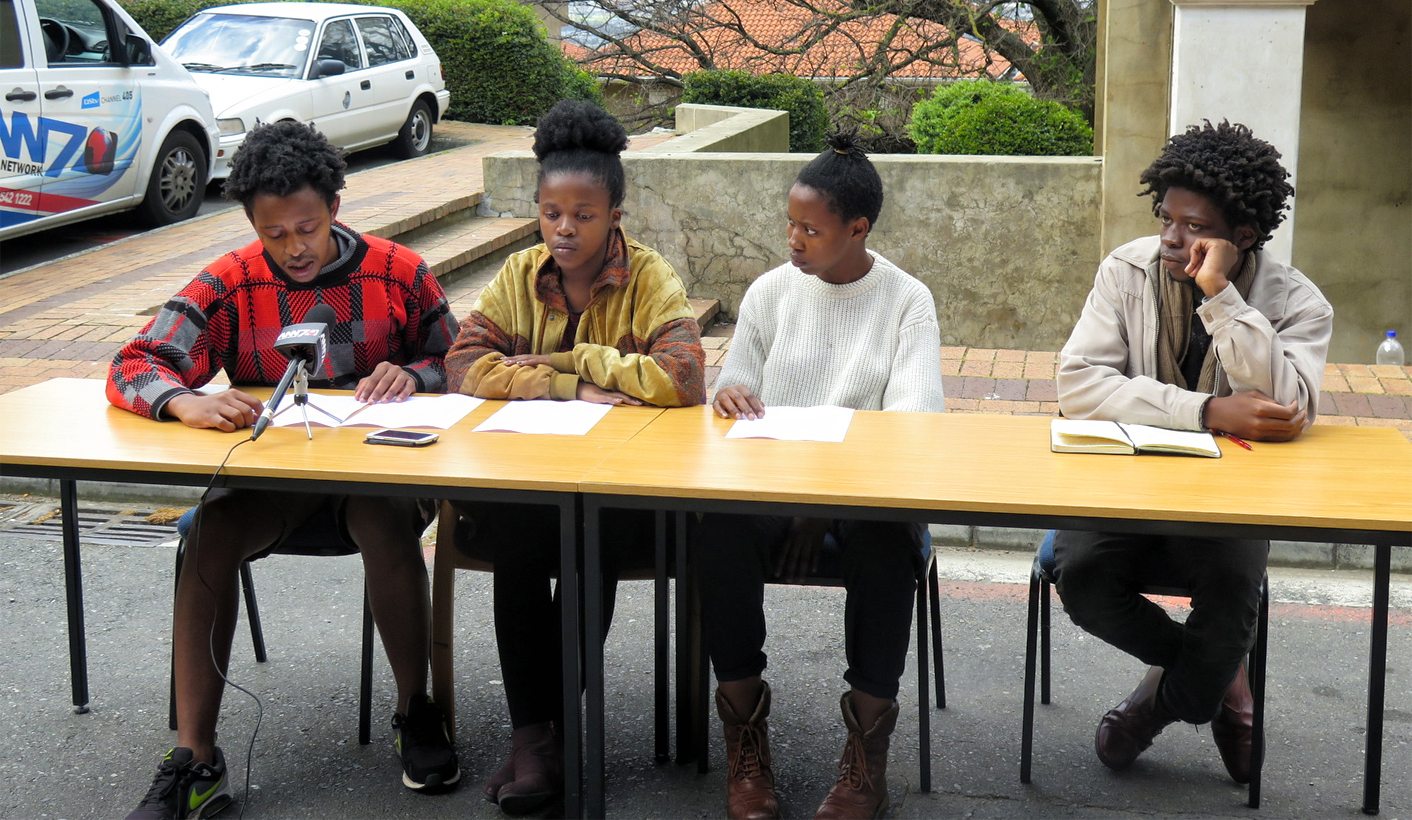 ‘We want our institutions open but we want them to be open for all’ UCT protesters tell Vice-Chancellor. By Ashleigh Furlong for GROUNDUP.

Student protesters at the University of Cape Town claim that Vice-Chancellor Max Price’s statements yesterday contained “distortion and a direct threat on our lives”.

The protesters called the information presented at Price’s press conference on Wednesday “the most distorted and narrow-minded account of the state of affairs in the University of Cape Town and the country at large”. They believe that Price has failed to properly engage with them and instead has tried to “demobilise and criminalise” students.

At a press conference today responding to Price’s one yesterday, three students read from a statement written by the group that is united under their call for a free decolonised education, a return of expelled students and a “Shackville TRC”.

“In his continued efforts at framing student protesters as a violent non-engaging minority, he managed to mislead society into believing that the processes they have run are legitimate and that they are open to a TRC process that will lead to amnesty being provided to criminalised students,” said Sinawo Thambo.

Yesterday Price said that if the expelled students wanted to engage in a TRC-like process where “they acknowledge what’s been done, and they also acknowledge that this is unacceptable behaviour and that they would not do these things again”, the university would be “interested in making it possible at some point in the future for them to come back”.

Thambo stated that it was arrogant of the university to say that the engagements this week have been around reopening the university while “completely disregarding” their demands.

“What does it mean to close the institution so that there can be a conversation about opening it?” he asked.

“We reject the notion that we do not want our institutions to open. It makes no sense,” said Thambo.

“We want our institutions open but we want them to be open for all, and tangible solutions must be formulated now,” he said.

When asked what “free education” meant to them, Simon Rakei explained that they believed that education should not be “commodified”.

“We want to make sure that it is free for all and not viewed as a commodity,” he said.

The students said that Price’s statement that the university had mostly avoided using private security was a lie.

Naledi Mbaba claimed that wherever black students gather “there is a constant presence of private security”. She alleged that private security had manhandled students at Hiddingh Campus and that this happened once again on Thursday morning on Upper Campus.

The students claim that 37 staff working in the cafeteria, who are not insourced, have been laid off by their boss during the recent protests. The insourcing process was also questioned, with Mbaba saying that some workers had been fired during the process and that those who were insourced had their lunch breaks cut in half and had not had their provident funds paid.

Referring to Price’s statement that if universities were not opened “we stand to lose a generation of students, much as we lost countless students to the protests of 1976”, Lungile Sigasa said that Price was expressing “threats of violence”.

She urged students to engage with the “Shackville TRC” and said that they will be announcing when and where they will be engaging the university.

UCT’s SRC published a statement saying that bringing private security and public order police onto campus next week when management plans to reopen the campus was “an unviable method of sustaining the academic project”.

The SRC hopes to meet with protesting students in an attempt to de-escalate the tension on campus so that Monday does not become a “flashpoint for violence” on the campus. The SRC said that it was yet to receive a response from the protesting group. DM