#FeesMustFall: Should the Chamber of Mines pay? 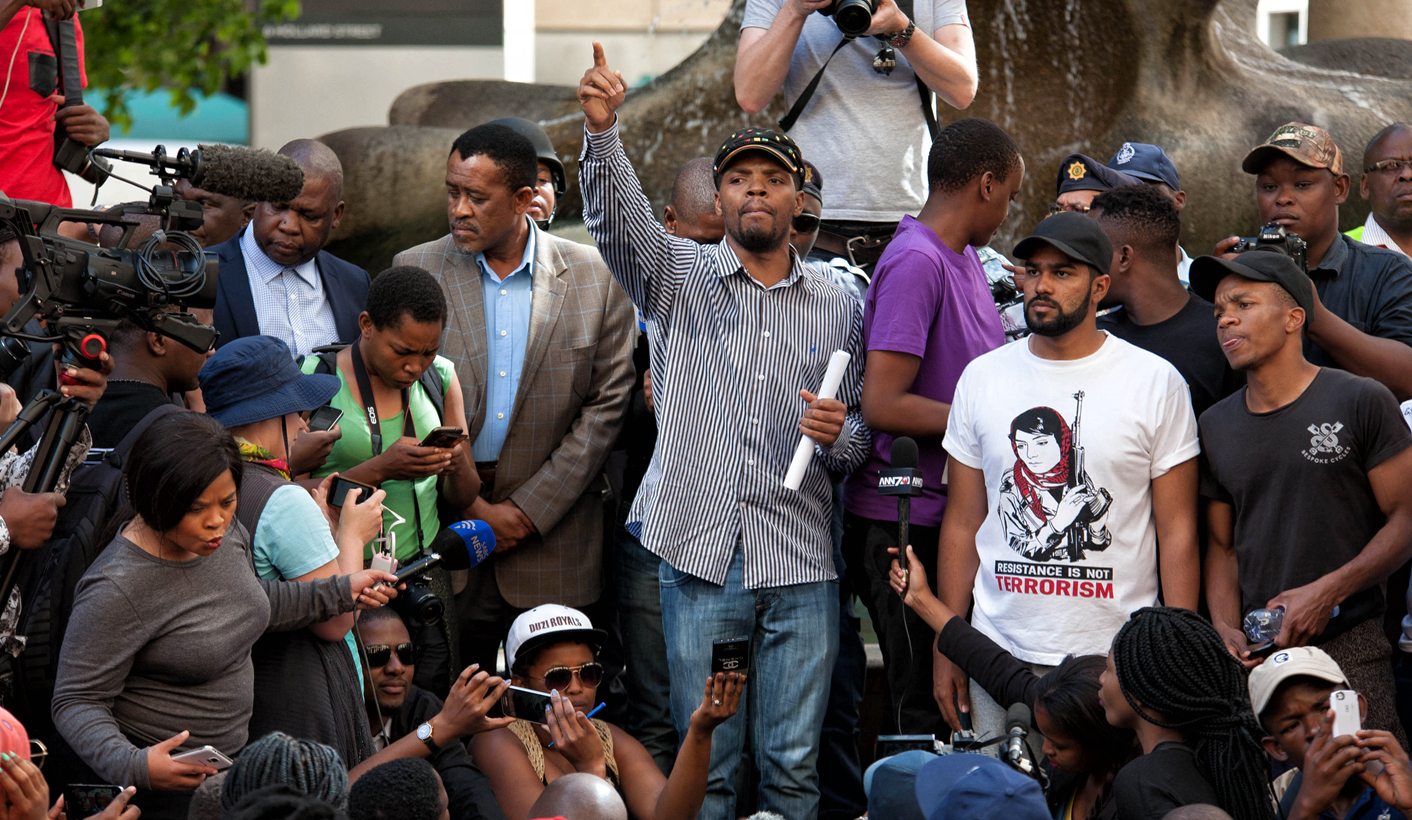 As protests continue at universities across the country, there was a call in Johannesburg for the Chamber of Mines to help fund free education. In their demands for equal access to education, students have targeted government, but also called on the private sector and big business. While many campuses have closed, protests are set to continue this week. By GREG NICOLSON.

On Wednesday, hundreds of protesters from the University of Witwatersrand (Wits) marched through Johannesburg to the Chamber of Mines to demand it help cover the cost of free higher education. Students, who were joined by religious leaders and a National Union of Mineworkers SA representative, delivered a memorandum to the Chamber.

“Our generation is shaping the policies of this country,” said former Wits SRC president Mcebo Dlamini. “This is the beginning of us retaking what was taken from our ancestors.”

Students urged the Chamber of Mines to get mining companies to commit more money to funding higher education, list public companies locally rather than abroad, and lobby government to increase its spending on higher education. The memorandum called on the private sector to help save universities and invest in a new social compact to reduce inequality.

Senior Chamber of Mines executive Vusi Mabena accepted the memorandum, saluted students for standing up for their education, and promised to respond within two weeks.

The call for free education has been directed mostly at government, with students and observers calling for new taxes and pointing out potential savings in tackling corruption and wasteful and irregular expenditure. Given the country’s inequalities, the private sector has also been called out.

Activist organisation amandla.mobi drew much interest on social media after it tweeted a list of leading South African executives and their annual incomes, suggesting that if the economy was restructured there would be enough money to pay for the likes of free education.

In submissions to the commission on funding higher education, student groups point to increased taxes on the rich as a possible source of income, as well as looking to the private sector.

While reviewing students’ demands, the Chamber of Mines on Wednesday said it shared their concerns, but called for normalisation at campuses. The Chamber acknowledged the role of the private sector.

“The Chamber views education as absolutely key to South Africa’s future, not only to grow the mining industry, but also to enhance opportunities for the citizens of the country,” it said in a statement.

“In the 2015 financial year alone, the Chamber and its members invested more than R5-billion in skills development and education projects – including supporting some 6,000 students in tertiary institutions. Over the past five years, Chamber members have supported around 12,500 students by providing bursaries at a number of tertiary institutions,” it responded.

“This is in addition to scholarships for the children of their own employees ranging from primary school to tertiary education. During the same period, 5,500 students and graduates participated in mining industry workplace experience programmes and were provided with internships in workplaces. In total, 18,000 students have been supported over a five year period – at a cost of more than R1.5-billion.

Further, more than R180-million has been spent over five years supporting the salaries of lecturers in Mining Engineering related faculties at universities. Without these funds, many lecturing positions would not exist.”

Numerous campaigns targeting corporate South Africa to fund higher education, particularly the “missing middle”, have been launched since #FeesMustFall began and in some cases it contributed to huge amounts of money raised. Structural change, however, will require government intervention.

Dlamini was also quoted on Monday claiming government has not focused on free education.

The Wits SRC plans to march to the offices of the Treasury this week.

In Johannesburg, protesting Wits and University of Johannesburg (UJ) students met in the afternoon and marched together. Wits remained closed ahead of an electronic poll on Thursday asking students and staff if they want to resume academic activities. The SRC said it will try to get a court interdict to prevent the university from holding the poll.

UJ remained open. A group of students supporting the #FeesMustFall campaign on Wednesday were roughly evicted from the university’s Kingsway campus by private security guards who randomly sprayed pepper spray before a battle of rock throwing between security and students began.

Many higher education institutions across the country remain closed as protests have continued into a second week since Higher Education and Training Minister Blade Nzimande made an announcement on 2017 fee increases last week.

The University of Limpopo’s campus joined others in suspending the academic programme on Wednesday and asking students to vacate residences. Six people were reportedly arrested during protests at the university while students claimed the police response was violent and excessive.

Similar claims against the police came from Rhodes University on Wednesday as students attempted to protest. Eleven students were arrested after police enforced an interdict the university had obtained. Several students were reportedly taken to hospital after police used rubber bullets on protesters. Rhodes plans to continue with classes on Thursday. DM