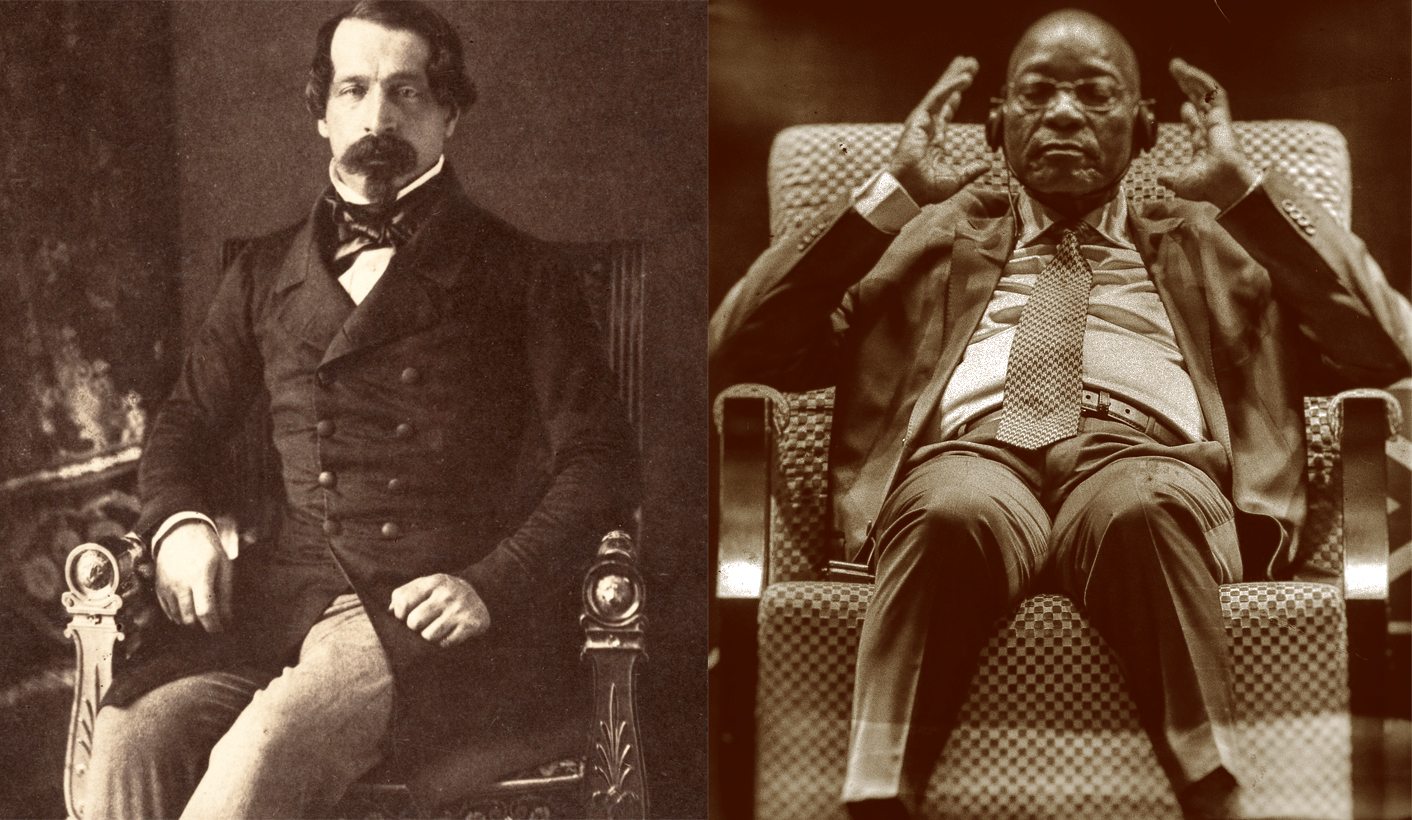 ‘A grotesque mediocrity’ making the state ‘at once loathsome and ridiculous’ are among the insights that Karl Marx’s 18th Brumaire holds for the Zuma Years. By VASHNA JAGARNATH.

On December 2, 1851 Louis-Napoléon Bonaparte, Napoleon Bonaparte’s nephew and the President of the Second French Republic, staged a coup d’état that would turn a president into an emperor and end the republic. Sometime in late December, Karl Marx, encouraged by his editor friend Joseph Weydemeyer, began writing an account of the coup d’état.

Marx’s brilliant and vivid account of the events was published in March 1852 as The 18th Brumaire of Louis Bonaparte. The essay reads like a combination of history and journalism and is a classic of political writing. Despite the urgency in the text there is nothing fleeting about Marx’s insight into the nature of politics and society. With insightful poetic phrases, including Shakespearean style insults, every page is alive with wit and shrewd observations.

Students reading this essay for the first time often say that, as with the writings of Frantz Fanon, there is something prophetic about Marx. They immediately see our own stage and cast of characters in Marx’s account of political machinations in mid-19th century France.

Of course, South Africa in 2016 is not France in 1851 and Zuma did not, like Bonaparte, come to power through a coup. Zuma has ruminated about the benefits of dictatorship, and has worked to undermine various aspects of our liberal democratic system. But he hasn’t tried to summarily do away with liberal democratic arrangements.

We cannot mechanically apply thinkers like Marx and Fanon as if they were in fact writing about contemporary South Africa. Fanon warned his readers that he did not “come with timeless truths” and in the Brumaire Marx warned against “superficial historical analogy”. But we can use some of their insights to throw new light on our own situation.

The most famous line in The 18th Brumaire is Marx’s observation that “history repeats itself, first as tragedy, second as farce”. It has often been used in reflections on how Zuma is taking us down the well-worn road that leads into postcolonial decline. If Ghana, the first country in Africa to win independence, was the tragedy, we, the last country on the continent to attain political freedom, are the farce. But there is considerably more insight in this essay than this observation, often read and repeated out of context.

In his 1869 introduction to the essay, Marx wrote “The class struggle in France created circumstances and relationships that made it possible for a grotesque mediocrity to play a hero’s part.”

It’s a rare student who doesn’t read this observation as casting more than a little light on Zuma’s rise to the Presidency. Zuma entered the national drama, stage left, announced as “a man of the people”. That was taken to mean that he was the progressive alternative to the supposed elitism of Thabo Mbeki.

It worked wonders. Many hoped that the dancing man of the people would bring radical change and improve the lives of workers and the poor.

Cosatu, the ANC Youth League, the SACP and a fair number of journalists and academics all drank the Kool-Aid. Zuma, “a grotesque mediocrity”, rose to power in the name of the people and the class struggle. A few years later workers were being massacred and the interests of elites, black and white, were consistently and often brazenly prioritised over those of workers and the poor. From Lonmin to Aurora Mines it has been clear that, like Bonaparte over 150 years ago, Zuma’s words have proved to be just words, words with no relation to his intentions or actions.

“Bonapartism” is sometimes used to refer to any charismatic leader who centralises authority in the name of the people and anti-elitism while using the popular classes to drive an agenda that advances the agenda of a new ruling class.

But it is important to remember that Marx specially used the term to refer to the way in which counter-revolutionary military figures seize power from real revolutionaries.

Zuma’s background is more in intelligence than in the military but he was able to present himself, through the tropes of heroic masculinity, as a military figure and to drive a successful counter-revolution within the ANC.

For Marx the fundamental problem with Louis-Napoléon Bonaparte was not corruption in the liberal sense but the fact that he corrupted the French Revolution. There was no revolution in South Africa but Zuma has certainly corrupted, perhaps irrevocably, the ANC and its allies.

But Marx doesn’t only offer us a way to understand Zuma’s rise to power. As society turns against Zuma the ideological manoeuvres of his camp are increasingly desperate and farcical.

Marx offers invaluable illumination into the basic logic of the spin and outright propaganda coming from the Zuma camp. He notes that in times of crisis there is a temptation to “anxiously conjure up the spirits of the past to their service, borrowing from them names, battle slogans, and costumes in order to present this new scene in world history in time-honoured disguise and borrowed language.”

It’s difficult to read this and not think of Des van Rooyen in a tacky version of the costume of an MK soldier and the endless attempts to spin Zuma’s project – including the outright looting of parastatals – as being about some kind of principled opposition to white monopoly capital and Western imperialism.

Under Zuma the language and symbols of the struggle against apartheid are used to legitimise actions that run directly counter to the principles and goals of that struggle.

Towards the end of essay Marx warns us that Bonaparte will throw “the whole bourgeois economy into confusion, violate everything that seemed inviolable – make some tolerant of revolution and makes others lust for it, and produces anarchy in the name of order, while at the same time stripping the entire state machinery of its halo, profaning it and making it at once loathsome and ridiculous”.

Once again it seems as if Marx was writing about South Africa under Zuma where the state has, in some respects, become “loathsome and ridiculous” and the “whole bourgeois economy” has been “thrown into confusion”, not by a radical challenge but by something else entirely: the ruthless pursuit of private wealth by a predatory elite.

Marx writes that Bonaparte wanted “to steal France in order to make a present of it to France”. He adds that “the most important feature of this process, by which France is taken in order to give to her, are the percentages that find their way into the pockets of the head and the members of the Society of December 10” [i.e. the Bonapartists]. This is a critical point. The language of the national interest is used to rob the nation in the name of a tiny and predatory elite made up of a small group of opportunists. In our case Zuma robs us all, in the name of the nation and historical redress, to make his family, the Guptas and a few others very, very rich. If we are not able to learn the lessons from history – to take the insights of thinkers like Marx and Fanon seriously – we will be left with nothing but ruination as the riches of our country are enjoyed in the hills of the Emirates.

In recalling the often astonishing resonances between South Africa under Zuma and France under Bonaparte we must also remember Marx’s warning against Caesarism: “In ancient Rome the class struggle took place only within a privileged minority, between the free rich and the free poor, while the great productive mass of the population, the slaves, formed the purely passive pedestal for these combatants.”

We will not resolve our central problems by restoring liberal hegemony, in which society is subject to the rule of capital, or via the kind of elite nationalism in which the only real contestation is about who gets to be part of the elite. We will only be able to resolve our problems if we can develop the kind of revolutionary political instrument that can overcome the rule of capital.

The turn to Zuma was a reactionary and very damaging response to the crisis of liberalism. The response to Zuma’s predatory project needs to put the working class and the poor, rural and urban, at the heart of the project of building a just and inclusive society. DM

Vashna Jagarnath is a senior lecturer in the Department of History at Rhodes. She writes and researches on Indian Cinema and the History of Africana Intellectual Thought with specific focus on Marxist ideology within Pan Africanism. Her PhD looked specifically at the various ways that Gandhi shaped and impacted upon the early 19th century South African public sphere. She is associated with Numsa – Movement for Socialism Task Team.