US 2016, The First Debate: Hillary Clinton Scores a Win – and just maybe a TKO by the final moments 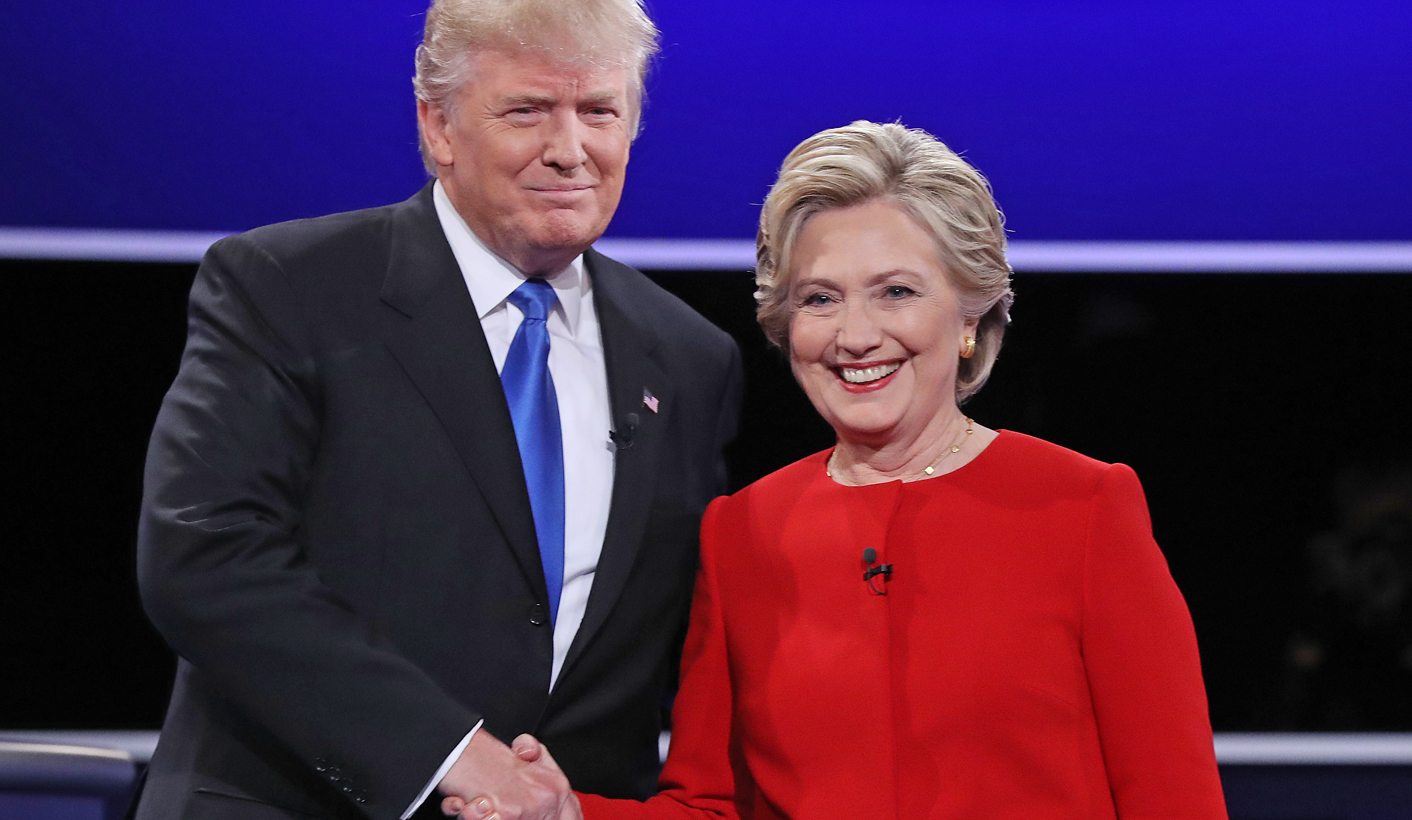 Staying up until the early hours to watch the first one-on-one debate between Hillary Clinton and Donald Trump, J. BROOKS SPECTOR watched the whole debate and it was energetic and hard fought. Spector only needed two cups of coffee to get through it. And it was a clear win for Hillary Clinton.

The first one-on-one debate in the 2016 presidential election took place on Monday, 26 September, at Hofstra University on Long Island, New York, a few kilometres from New York City. The format, moderated by veteran NBC evening news anchor, Lester Holt, was designed to maximize substantive clash between candidates, rather than the rat-a-tat-tat, “he said, she said” style. By and large, the format succeeded in doing that, although viewers probably heard too much about Trump’s great, unbelievable company, and his great decisions as a great businessman. And this viewer quickly ran out of fingers and toes counting the number of times Trump mentioned the twenty trillion dollars of sovereign debt that was supposedly responsible for the country’s rundown highways and airports.

Throughout the debate, perhaps one hundred million television viewers in the US, and still more elsewhere, were closely focused on the mental, emotional, physical and psychological attributes of the candidates. Did Clinton manage to deliver her multi-faceted policy details, fact check her opponent and – crucially – open the curtain on her inner self? Did Donald Trump scowl and smirk, or did he avoid an episode of spontaneous combustion or an explosion, while moving beyond the self-aggrandizing demeanour Americans came to know during his time as host of the TV reality show, “The Apprentice”?

Ultimately, it took 45 minutes before Trump decided to argue with moderator Lester Holt – this coming over the unconstitutionality of his proposed “stop and frisk” rule for police to enforce the peace. Concurrently, “law and order” got a fascinating, new twist in the hands of Donald Trump – this as a way of saving the country’s inner cities and the minority populations, although it was also a way of subtly signaling to his true believers that he is the go-to guy for strong measures.

This debate began with a wrangle over how best to encourage future economic growth, it became a tussle over whether major upper end tax cuts and browbeating businesses to return to America and blaming those nefarious Chinese and Mexicans for stealing jobs, or making infrastructure investments for the future is the right path. No prize for guessing who said what.

And then there was “birtherism.” Trump laid the blame for the false story of Barack Obama’s supposed birth in Kenya squarely on Hillary Clinton by way of Sidney Blumenthal. Trump claimed a great deal of the credit for forcing Obama to produce a birth certificate, while Clinton labelled Trump’s insistence on this as a racist lie. Getting her own licks in, Clinton managed to squeeze in Trump’s experience in being tried in racial discrimination law suits when he began his real estate adventures. Oh, and she pretty much cornered him on his total lack of transparency on his taxes, and whether he even paid any. Ouch.

An hour into this debate, however, if Donald Trump was only partially successful in demonstrating his real “presidential-ness”, Hillary Clinton was landing punches. She also managed to elicit some prize smirks from The Donald, however, that everyone saw in the split-screen format used to broadcast the debate.

As the debate turned directly to “protecting national security”, Clinton raised the growing threat of cyber insecurity, while Donald Trump told the audience how the country is being beaten by ISIS’ use of the Internet at every turn, and then he played his card of telling the audience how many generals and admirals, how many police, and how many border patrol agents have now endorsed him.

When the candidates wrestled with the question of dealing with homegrown terror, viewers were right back to some of Trump’s favorite less than truthful tropes of “taking the oil” from Iraq, and of his supposed opposition to the 2003 Iraq invasion. And there was the inevitable super-superlative, near-apocalyptic language from him of the “look at the Middle East, it’s a total mess.” Well, that it may well be, but that Trumpean judgment managed to ignore how the immediate “mess” began. And then Trump wrangled yet again with Lester Holt – and, inevitably, the fault of the mainstream media – over whether he supported or opposed the original Iraq invasion.

Oh, and then, with about ten minutes left, Trump seemed finally to begin his burn. “I have better judgment that she does” and “I have a better temperament too”. “Ha!” he seemed to say. As the exchanges covered the Iran nuclear deal, Trump called the multi-state accord a disaster, as Clinton called it a major success. Just as debate began its final moments, Clinton managed to sneak in the concern about whose finger should be on the nuclear trigger, as Trump called out Germany and Japan for failing to pay their fair share of regional defense costs. Trump also casually encouraged China to “go into North Korea” to deal briskly with that state’s nuclear ambitions.

Trump attacked Clinton for her lack of stamina, which moderator Holt had asked if that was code for her being female. Well, okay, Trump seemed to say, well, okay, she has lots of experience, but it is bad experience. In response, Clinton pointed to Trump’s long experience of linguistic misogyny – including a swipe at Rosie O’Donnell – and Trump’s retort was that her campaign has been floating “hundreds of millions of ads” against him.

In the final round, Trump suggested that corruption led to hundreds of people who were bound to be deported being processed for citizenship instead. And that was a metaphor for the Obama administration’s failures.

There was clearly very little amity between the candidates by the time it was over. So, how did it come out? As Jake Tapper, one of CNN’s analysts, remarked just after it was over, Trump was doing well enough at the beginning on the questions of trade and economic decline, but, eventually he took the bait, again and again, and he went over to the dark side whenever his own words (and some rather murky words on his taxes) were quoted back at him. Things will not be very pretty after the fact checkers do their detailed tap dance on Donald Trump’s performance.

The verdict? Hillary Clinton won this round substantially on points, but Trump did not suffer a clear knockout. Just maybe she gained a TKO by the final minutes – and a sense of that will come clearer as the analysts, the barber shop conversations, and social media chew this one over and over. And maybe that impression will jell in the two subsequent debates when Americans see if he any has more depth than he showed tonight. This debate is actually like a job interview with the entire nation as interviewers. If that was what happened on Monday night, the Trumpster didn’t get the job. DM