amaBhungane: Threat to Africa’s elephants a headache for CoP17 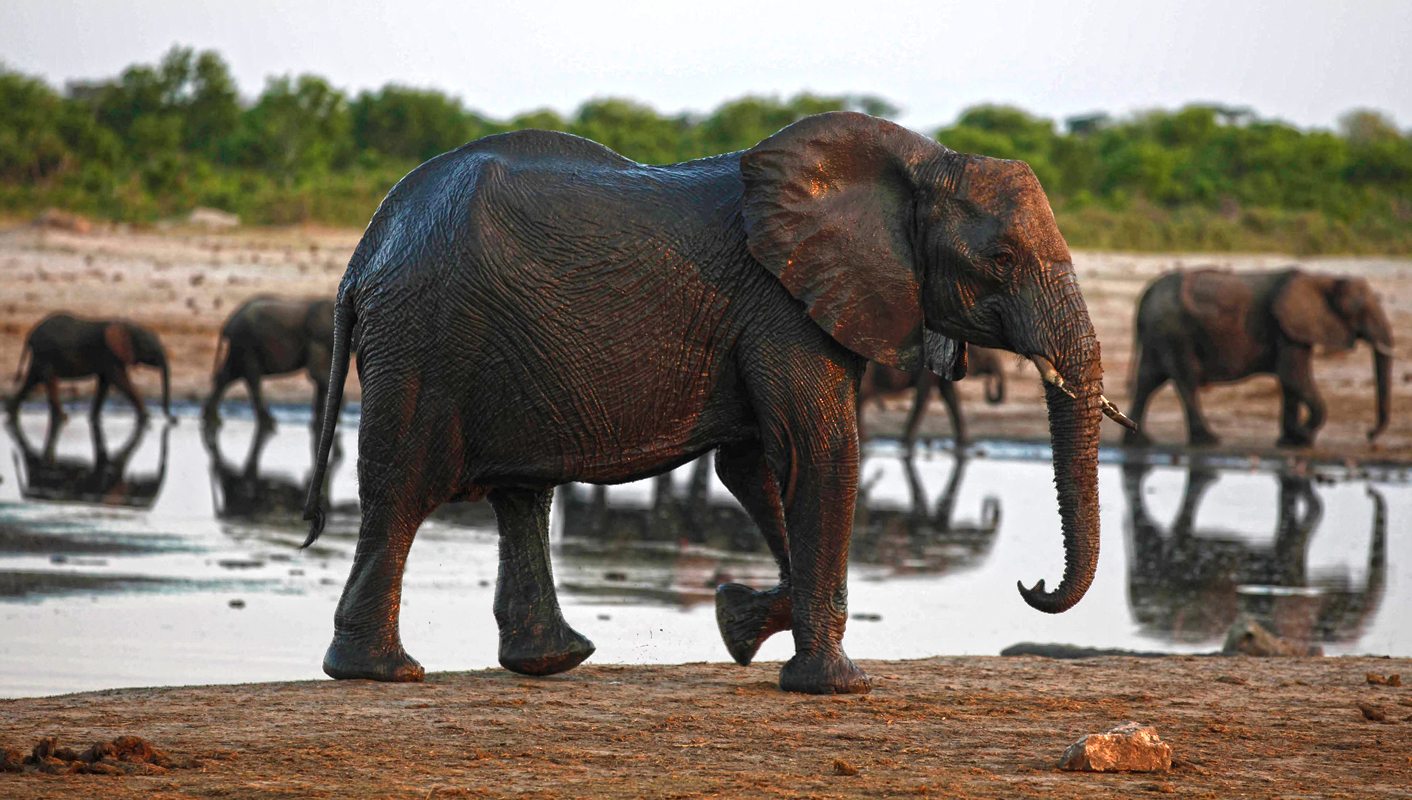 The 17th Cites conference (CoP17) begins this week in Johannesburg against the sombre background of a 30% crash in African savanna elephant numbers in just seven years, mainly because of poaching driven by Far Eastern syndicates. Conservationists also worry that ivory poaching is moving through southern Zambia towards Botswana’s Okavanga Delta, location of the world’s largest elephant herds. By John Mukela for AMABHUNGANE.

The Great Elephant Census, funded by Microsoft co-founder Paul G Allen’s company Vulcan, was released in March. It found there were 352,271 savanna elephants still in the wild, a loss of 144,000, representing an 8% annual rate of decline between 2007 and 2014. During the 1930s there were 15-million wild savanna elephants in Africa.

CoP17 will consider 62 proposals to modify controls on international wildlife trade and products from around the world. Close to 500 species may be affected, with elephants prominent among them.

The Elephant Trade Information System (Etis), administered by Cites, states that “levels of poaching (in Africa) remain far too high to allow elephant populations to recover, with some populations facing risk of local extinction”.

Large numbers of elephant carcasses were discovered in allegedly protected areas. Hardest hit are Mozambique and Tanzania, where the rate of decline is 40% a year.

But the survey also highlighted the threat to the Zambian ecosystem, with “a very high carcass ratio of 85%” in the Sioma-Ngwezi National Park in the south-west of the country.

It found that Sioma-Ngwezi and Lower West Zambezi Game Management Area are “very unstable” and that the elephant population is “rapidly decreasing”.

These alarming statistics pinpoint the area as a possible new hotspot for elephant poaching, and raise a red flag over the growing threat to Botswana’s iconic herds.

Sioma Ngwezi is part of the Kavango-Zambezi Transfrontier Conservation Area, or Kaza, straddling Zambia, Angola, Namibia, Botswana and Zimbabwe. Poaching-related arrests in the park rose from 11 in 2014 to 84 last year.

Kaza was once estimated to host as many as 250,000 elephants, and Zambia’s estimated national herd in the early 1960s was of a similar size. Poaching saw those numbers dwindle to 18,000 by the late 1980s.

The massive decline spoke of a lack of co-ordinated wildlife policies, crooked game management enforcement and lack of government capacity.

Botswana now records the world’s highest elephant population, of up to 50,000, compared to Zambia’s 21,800.

Zambia’s geographical position places it at the centre of regional networks, with illegal wildlife products from a number of countries being transported from and through that country, en route to other transit areas and markets.

This is the rationale for the establishment of wildlife NGOs such as Game Rangers International (GRI), a Zambian conservation organisation that works with the government’s department of national parks and wildlife.

The NGO notes that Lusaka “has for long been known as a wildlife crime hub where wildlife products are processed and from where criminals are able to source weapons, finance and other logistics”.

Two current Zambian trials in the Lusaka magistrates court, in which five men are charged with unlawful possession of rhino horn, highlight Zambia’s connections to wildlife rings operating in the region.

The horns in question were in transit from Namibia to the Far East. Significantly, one of the accused, Nefuma Stefanus, is Namibian.

Of equal concern is the fact that two other accused, Mwiya Masheke and Chrispine Masheke, serve the Zambian air force. The trials, which began at the beginning of this month, highlight an alarming pattern in Africa – the involvement of politicians, civil servants, law enforcement officers and conservation officials, responsible for protecting threatened species, in alleged poaching and smuggling.

The second ongoing trial involves the alleged theft in Lusaka of the same rhino horns from the department’s exhibits strongroom by Lameck Mumba, a senior departmental investigator.

A departmental sting operation cornered the four at the Embassy Park shopping mall, near the teeming Lusaka township of Chawama, with contraband of 3.9kg of rhino horn worth R5-million.

As Zambia’s last rhino was killed three decades ago, the country was not the source of the contraband.

All five suspects deny the charges but if found guilty, could face minimum sentences of five years and maximum 25-year terms.

The involvement of embassy mission staff in wildlife trafficking is also well known across the region. In Tanzania, considered the largest source of poached ivory in the world, Chinese diplomats have been implicated. In Zimbabwe, it was North Koreans and in South Africa, fingers were pointed at Vietnamese embassy staff.

In Zambia, North Koreans were initially heavily involved before the closure of their embassy in 1998, but with heightened Chinese co-operation, the Chinese have taken over.

Collusion by senior Zambia military personnel with wildlife criminals is not new. In May 2013 Colonel Oscar Chapula, military adviser to the Zambia army commander, was intercepted at Kenneth Kaunda International Airport with two suitcases of elephant tusks worth $1.5-million.

Chapula was about to fly out on a seven-day working visit to China, as part of the army commander’s entourage, alongside two unnamed Chinese embassy officials who reportedly claimed diplomatic immunity.

Following top-level interventions by defence ministry officials and the Chinese ambassador, the two Chinese were released, and nothing further was heard of the case.

Botswana-based Mike Chase, director of the conservation NGO Elephants Without Borders, said poachers operate with impunity in Sioma-Ngwezi because of its remoteness. “No one’s involved in these regions—no ecotourism, no researchers, and probably very little in the way of anti-poaching initiatives,” Chase said.

Policing the area is also difficult because poachers have an easy escape route. “Within a matter of minutes they can be in four different countries, knowing that local law enforcement officials will not pursue them across international borders,” he added.

Chase is alarmed by Sioma’s closeness to the Okavango Delta, which hosts the world’s largest single remaining population. “It’s only a matter of time before poachers begin killing elephants there,” he warned.

A Zambian government official, who asked not be named, reacted to the census mortality figures for Sioma-Ngwezi by insisting that they were “not true”.

Pressed to explain this, given that aerial counts of elephant carcasses had been undertaken by researchers, he blamed “natural deaths”.

He said the low counts of live elephants in the Sioma-Ngwezi area was because the elephant population was migratory, crossing to Kaza areas where there was water.

“The international media has blown the matter out of proportion,” he said.

Zambia’s wildlife department stonewalled all attempts to get it to comment, but the Wildlife Crime Prevention Project’s Sarah Davies said the unit has registered some successes.

“Although the threat is significant, the department is using all resources available to combat criminals and has since the commencement of the new Wildlife Act this year, secured some impressive convictions of minimum five years for ivory, pangolin and some bush-meat traders,” she said in response to questions.

It also provides for minimum sentences of five years and a maximum of 25 years in jail for first offenders charged with illegal hunting.

However, illegal trafficking of ivory or rhino horn carries heavier penalties – a minimum of between seven years and 25 years for first offenders, and a minimum sentence of 15 years for second offenders.

In all the sentences, there is no option of a fine.

Cites secretary-general John Scanlon noted that “the momentum generated over the past five years is translating into deeper and stronger efforts to fight poaching and illicit trafficking on the front-lines. where it is needed most”.

The battle had moved to “the rangers in the field, to police and customs at ports of entry and exit and across illicit markets.

“Governments must continue to strengthen their efforts right across the illegal ivory supply chain, while international bodies and civil society must further enhance their much-needed support if we are to reverse the devastating poaching trends of the past decade,” Scanlon said. DM

Photo: A herd of elephants gather at a watering hole inside Hwange National Park, about 840 km (521 miles) outside Harare, October 28, 2013. REUTERS/Philimon Bulawayo