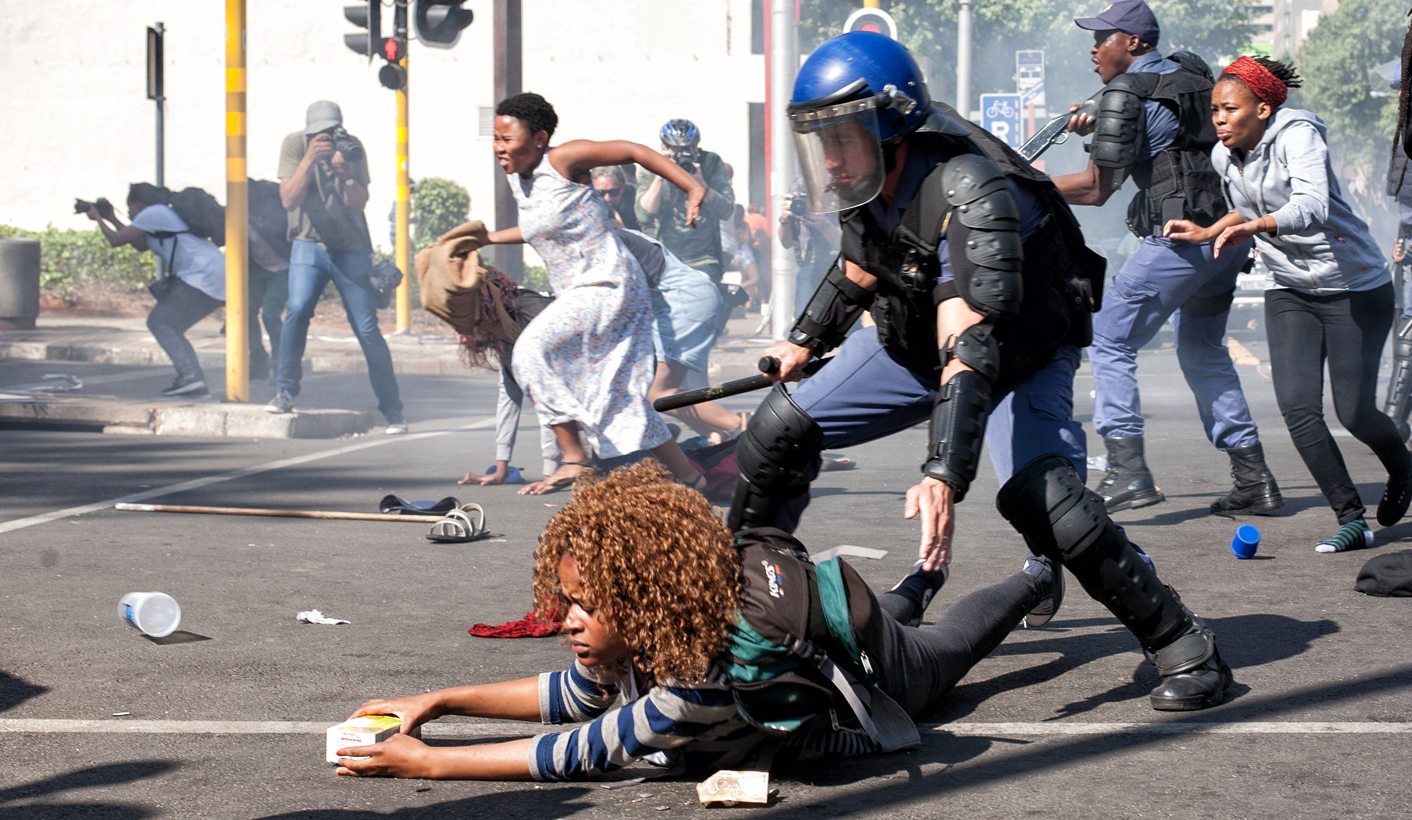 Students continue to protest at different campuses across the country following Higher Education and Training Minister Blade Nzimande’s announcement on fee increases. At the University of Witwatersrand on Wednesday, following clashes with private security officers on Tuesday, students clashed with police. By GREG NICOLSON.

Protesting Wits students on Wednesday held a mass meeting, which led to them wanting to march to the nearby Rosebank College. Police refused to let them enter the college or march around Braamfontein. Following a warning from cops, students decided to return to campus, some linking hands in a line between students and police. (Greg Nicolson)

Nzimande on Monday announced that government would pay for 2017 fee increases at varsities and TVET colleges for many poor and middle-class students. Protesting students have rejected his announcement, demanding a clearer path towards free education. (Greg Nicolson)

After returning to campus, a large number of police stood outside the gates of a Wits Jorrisen Street entrance. As students began singing closer to the police line, cops let off stun grenades, causing chaos. (Greg Nicolson)

In a cloud of tear gas, an officer fires rubber bullets at students. Police immediately moved in on students after the first stun grenades were set off, firing rubber bullets and more stun grenades. A number of students were injured. One student appeared seriously injured as a stun grenade went off in her face as she fell to the ground. (Greg Nicolson)

A student covers her face to avoid the effects of tear gas. (Greg Nicolson)

Then the woman flees as police encroach. (Greg Nicolson)

Student leaders tried to discuss a ceasefire with police, but other students had started throwing rocks in retaliation, leading to cops continuing to fire on students. (Greg Nicolson)

As some students threw rocks at police, they also targeted the media, blaming the press for the situation, angered at visuals being taken of their attempts to fight the police. This student threw a rock directly aimed at the media. (Greg Nicolson)

The gates at the Wits University entrance were closed, creating a buffer between police and students, but police still tried to fire rubber bullets at those they could still see throwing rocks. Students said police denied ambulances entry to the campus to help the injured, but as they were eventually taken away, from outside the gates, students retreated inside the campus. (Greg Nicolson) DM

Main photo: Students ran and some fell. It’s unclear but it appears in this picture that an officer helped a student. Police tried to arrest other students, however, who said they had done no wrong. (Greg Nicolson)