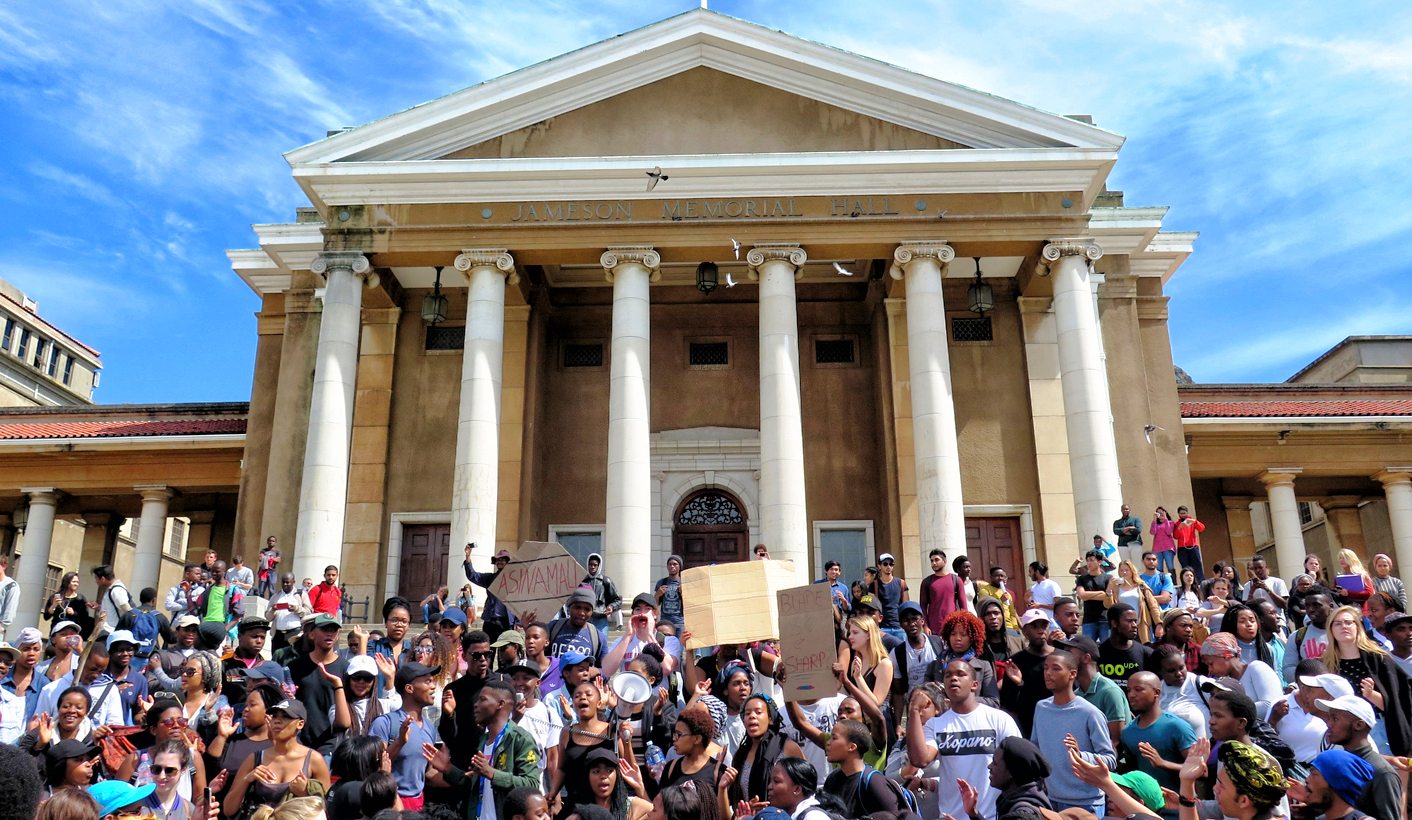 The UCT campus was closed for a second day in a row as students protested against education minister Blade Nzimande’s plan for free varsity education for the poor but not the well-off. By Ashleigh Furlong for GROUNDUP.

Several hundred protesting University of Cape Town (UCT) students shut down its campus on Tuesday, calling for their demands to be met.

These demands include the implementation of a “free quality and decolonial” education, the ending of interdicts and expulsions of students who were involved in protests earlier this year, and a minimum wage of R12,500 a month for all workers.

The students began the day by blocking the entrances to the campus, with groups of protesters entering lectures and halting them.

By midday, management announced that the university would remain closed on Tuesday and Wednesday. At the same time a large group of protesting students gathered on the upper campus where they were addressed by student leaders.

Athabile Nonxuba, an SRC candidate in the upcoming elections at the university, told the students that they were “on the right side of history”.

He questioned why some students were not participating in the protest since they were affected by yesterday’s announcement about the fee increase for 2017. In the announcement, Minister of Higher Education and Training Blade Nzimande said universities could increase fees by up to 8% and that families with household incomes of less than R600,000 could apply to have the increase subsidised.

However, the protesters’ position appears to be contradicted by the UCT Student Representative Council which yesterday described Nzimande’s statement as a “positive step”, although it criticised  the minister’s “lack of attention to the resounding call for free education in our lifetime”.

UCT Professor of Microbiology, Edward  Rybicki, wrote an open letter  to vice-chancellor Max Price in which he stated:

“It is completely unfair to expect staff to come to work when everything to do with [undergraduate] teaching has been cancelled, and not only not facilitate them being able to get to work, but also fail signally to protect them when they are there. I appreciate that some folk may feel that “militarisation” of our campus is offensive and upsetting; I submit that the abject failure to be seen to protect the people that are the core of the teaching and research endeavours is more offensive, and more upsetting.

“I also note that, close to a year after I asked the question in Senate, there has still been no overt effort to find out just what level of support the various amorphous tendencies and groupings that are disrupting our university, actually have. I am glad that – finally! – the SRC is no longer being effectively sidelined.”

Suellen Shay, a dean and associate professor at UCT’s Centre for Higher Education Development, wrote that Nzimande had put forward a pro-poor policy. She wrote:

“The focus in the next few days will be less on making fee-related decisions or discussing the minister’s announcement. Universities will be focusing on security, on keeping campuses open or shutting them down amid safety concerns. There’s no head space to tackle students’ underlying deep-seated anger and frustration. We’ll be trying to figure out the cost of security per day instead of having bigger discussions.”

Meanwhile, student leader and postgraduate student Lindiwe Dlamini told the crowd on campus that she owed the university R48,000 but her family could not afford to pay.

She said students were tired of protesting continuously.

“This has to be the last year that we protest about fees,” she said.

Dlamini said university management was playing a “Mickey  Mouse divide and conquer game” in which it had succeeded, since some students had created a petition online demanding that the university take action against the protesters.

The protesters are also calling for a “Shackville TRC”. This follows the action taken by the university management after students erected a shack on the campus in protest against the university’s residence policy.

Included in demands from workers are for disciplinary action not to be taken against workers for taking part in protest action and for “insourcing across the board”. Most workers have already been insourced.

Protester Sinawo Thambo told GroundUp that Nzimande’s announcement yesterday that households earning less than R600,000 would be able to apply for a subsidy to cover the fee increase was a “dividing tactic”. He called for “free decolonial education for all”.