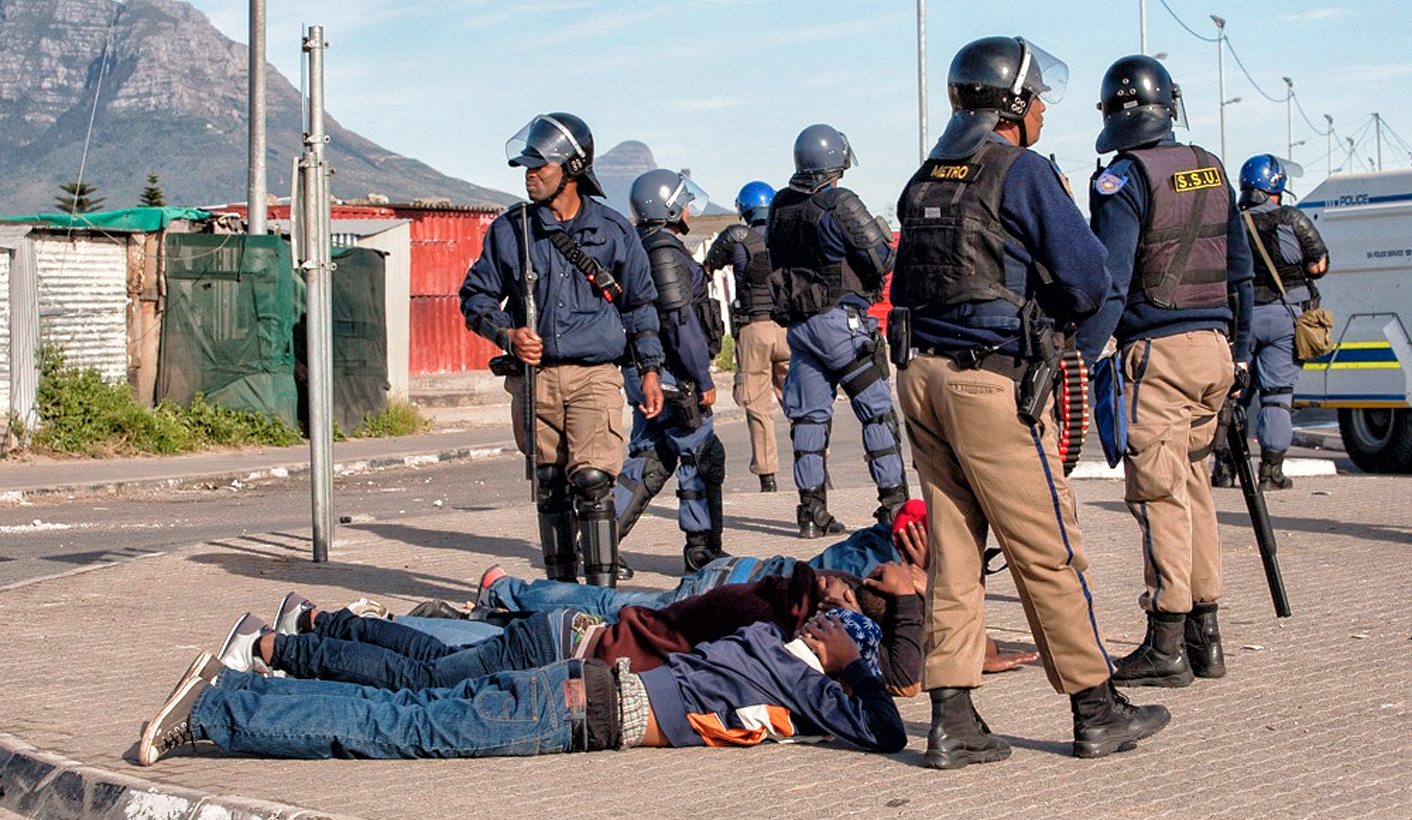 Thirty-three people were arrested as transport was disrupted and shops looted during clashes between police and protesters in Langa. By Tariro Washinyira and Ashraf Hendricks for GROUNDUP.

Early on Tuesday morning, hundreds of residents from Zone 18, Joe Slovo, in Langa launched a protest and blocked Jakes Gerwel Drive and Bluegum Street on the N2 in Cape Town.

A resident from Joe Slovo Zone 30 said the protest was about housing and other services.

“The protesters were up as early as 3am today. They barricaded the road with huge stones, logs, and burned tyres. Spaza shop owners were warned last night not to open their shops. A few Somali spazas that opened in the morning were looted.”

Taxis and cars could not enter Langa. Children could not get to school and people missed work. Spaza shops and crèches were closed. Metrorail services were suspended. The Langa  post office was burnt.

A heavy police presence was soon on the scene including a water canon truck.

Residents said when protesters saw police they dispersed and moved near the train station around 8am.

“There is no reason for police to keep on firing on bystanders or people who are walking in the streets,” said a resident.

One of the residents said it angered them that instead of Ward Councillor Samkelo John coming to listen to them, the police were sent to shoot them.

“We last saw John during election campaigns, and we will see him again in the next election. We only see police now. All they do is shooting, and they do not want to talk to us. We are still living under apartheid,” said the resident.

“Look, we are living in a squatter camp. There is rubbish all over. When it rains, these shacks become dams. We want houses.”

Samkelo John said he was in a meeting and unable to comment.

Lieutenant-Colonel Andrè Traut of the Western Cape Media Centre said, “Police members will remain in the area to maintain law and order until we are satisfied that the situation has been contained. Approximately 1,000 people are protesting and throwing stones at trains in attempts to prevent commuters from going to work … Our operations in the area continue.”

Andile Dasayi, who has been living in Langa for 18 years, was protesting  outside the police station because the police “arrested our comrades.

“We’ve been asking for a better life for a long time now. Since 2014, we’ve been protesting to the City of Cape Town so that they can renovate the hostels where we are staying,” said Dasayi.

He lives in a hostel with three families in one room, sharing one toilet.

“It’s difficult to have your own privacy,” he said. “It’s havoc.”

Thembelani Nyamakazi, one of the leaders of the Langa protesters, explained that they wanted the hostels to be converted into family units.

Mayoral Committee Member for Human Settlements, Councillor Benedicta Van Minnen, said the protest was led by a group from the Langa Zones Hostel “with whom the City has been engaging”.

“The group is essentially asking the City to prioritise their interests ahead of others in a similar situation. They have demanded further upgrades to the hostels in Langa. The City has explained that Langa has already benefited from the conversion of some of the hostels into family units as well as the completion of Phase 1 of the Langa Hostels Community Residential Units (i.e. Hamilton Naki Square), with Phase 2 on its way.

“To date, 463 families who were living in the new flats and special quarters hostels and in the Siyahlala informal settlement in Langa have benefited from this redress programme and moved into their homes in December 2015. This forms part of the City’s plan to develop a total of 1,300 CRUs within Langa over the next three years,” said Van Minnen.

School students who normally take trains to get to their homes in townships had to use buses.  The situation in Langa remains volatile. At the time of publication about 200 protesters have gathered outside the Langa taxi rank, singing and dancing. DM