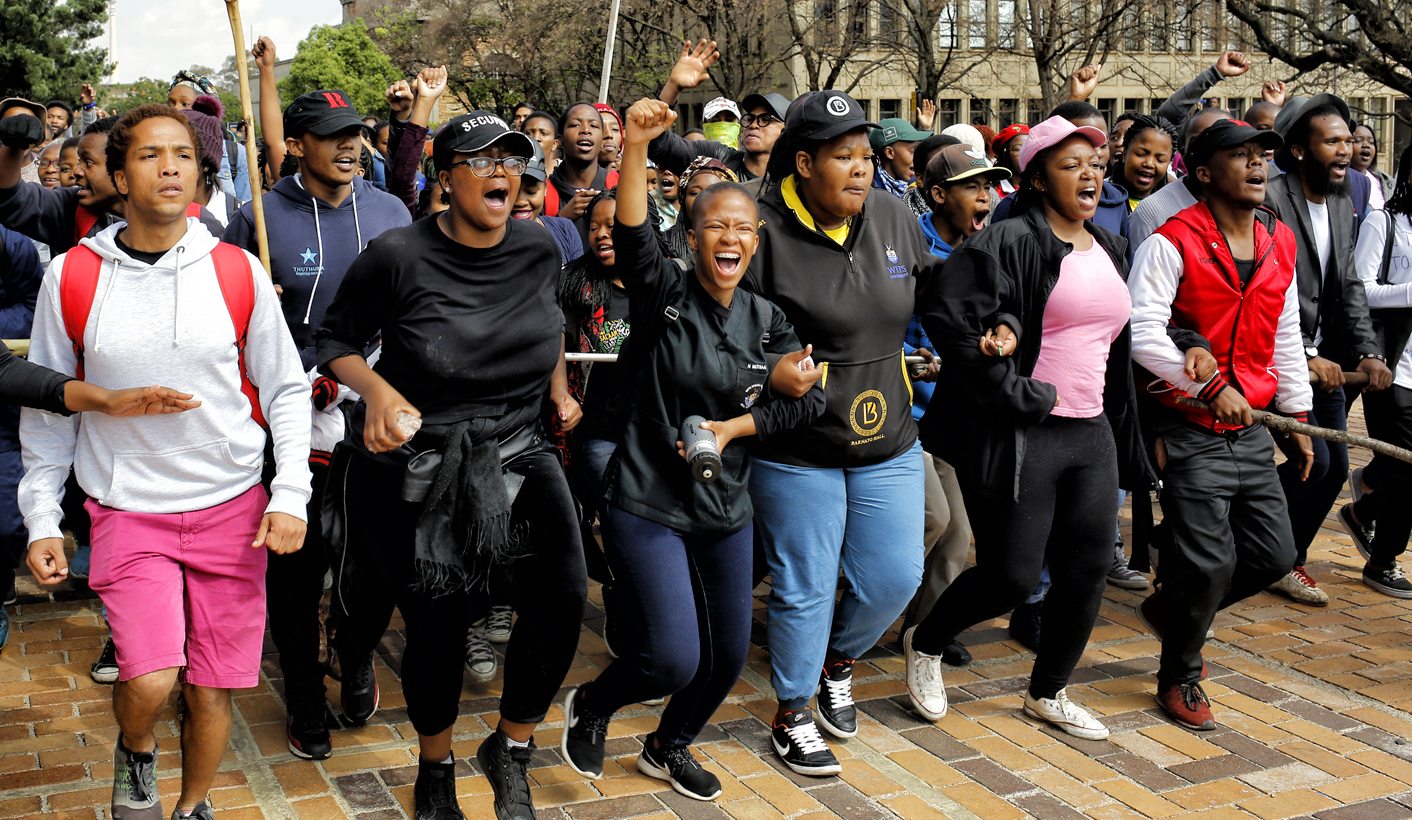 Various campuses were closed on Tuesday as students protested against Higher Education and Training Minister Blade Nzimande’s announcement about 2017 fee increases. While decisions on the increments rest with individual institutions, some students say the conversation misses the point: free education. At the same time, treasury says finding the R2.5-billion to meet the policy to cover increases for poor students is extremely challenging. By GREG NICOLSON.

Nzimande’s announcement on Monday that government would pay for fee increases of up to 8% at universities and TVET colleges for NSFAS students and those with a household income up to R600,000 raised a number of questions. How would government cover the estimated R2.5-billion to pay increases for 70% to 80% of undergraduates? Would universities keep increases within the 8% limit? And how would students react?

Some universities announced that the normal academic programme at certain campuses would be suspended, while others continued operating. A few of the demonstrations were reported to have been marked by violent confrontations between students, private security officers, and police. Students at a number of campuses across the country on Tuesday afternoon were planning to meet to discuss the way forward.

Protesting students appeared aggrieved that Nzimande’s announcement failed to commit to a policy of free higher education, did not cover fee increases for all students for 2017, and that while recommending 8% increases, which for most students will be covered by government, he allowed universities to set their own increases.

Many of the affected campuses have experienced protests over various issues since, and before, the government last year decided to pay for fee increases for all students. Reports from campuses where demonstrations have occurred suggest students want much more than an interim grant and are pushing for broader measures to implement free education and transform universities. They link the government’s performance on improving the lives for the majority of South Africans to the long-standing demand for free higher education and specific campus issues.

“The students have expressed the fact that what the minister has announced does not address the problems that our students are facing; we all agreed that the poor and missing middle are systematically excluded through the lack of funding. We will only be liberated through free quality education for the poor,” said Nelson Mandela Metropolitan University’s SRC in a statement, announcing that it planned to shut the university down.

“We have also noted that although the strategic objective is free quality education, which is a national competence which reflects on the failures of government.”

The Wits SRC said, “We have heard nothing from the minister about free education. He speaks of the relief a no-fee increment will bring for nurses, teachers, police, social workers and other working-class parents but what he fails to recognise is that universities are inaccessible for most households already. We cannot allow our movement to be brought down to the superficial level of increments for some and not for others when overall our struggle is for free, decolonised and quality education.”

On Monday, Nzimande spoke of his intervention as a temporary measure while a presidential commission of inquiry assesses the feasibility of free education. He also encouraged universities to continue the process of transformation. Protesting students have rejected his comments on the issues.

The National Treasury on Tuesday said it was working with the Department of Higher Education and Training, as well as other departments, to find the R2.5-billion and would announce an outcome during Finance Minister Pravin Gordhan’s medium-term budget speech on 26 October.

“National Treasury has been exploring different mechanisms of finding the money to pay for the subsidy. In the main, it is embarking on a prioritising drive and working with various departments and agencies to address the shortfall,” Treasury said. It’s likely therefore that other departments and government entities are being asked where they can cut costs and whether there are programmes they can put on hold or scrap.

“In the present constrained fiscal environment this is an extremely challenging situation,” Treasury continued, supporting Nzimande’s decision to cover fee increases for the poor and “missing middle” while letting wealthier students pay the fee hikes. Treasury said, “It is important therefore that those who can afford to pay do so to enable the state to support the ever-increasing numbers of those who deserve support and cannot afford.”

While Treasury weighs up the costs, it’s still up to universities and colleges to set their fee increases for 2017, deciding whether to stick within the minister’s 8% recommendation or impose higher fees, which would then be passed on to poor students. Most institutions are still deliberating.

The ANC Youth League on Tuesday called Nzimande’s announcement a step in the right direction, but said he did not go far enough. The minister should have put a moratorium on fee increases for all students and announced direct steps towards implementing a policy of free higher education, suggesting the wealthy be taxed to fund the system.

“We continue to reject all delay tactics that reproduce the crisis of affordability and sustainable financial access,” said the ANCYL, which also called for a review of the autonomy of higher learning institutions.

The South African Students Congress (Sasco) said ANC government officials lacked the will to implement free education and called the commission of inquiry a delaying tactic. It called for the government task team on the “missing middle” to expedite its work.

“Students are losing patience. We can no longer bear the burden of uncertainty about our future in 2017. We want no-fee increment for the 2017 academic year, especially for the poor,” said Sasco.

Parliament’s portfolio committee on higher education and training added its voice. Welcoming Nzimande’s decision, it called for stability at campuses. “We require stabilisation in higher education and training. It is commendable that the minister had announced a position that assists everyone, including those students attending TVET colleges. Now students can now focus on their studies and on building decent futures for themselves,” said chairwoman Connie September. DM

Photo: Students from Wits University demonstrate during the second day of #Feemustfall demonstration against the announcement of fee increases at universities across the country, Johannesburg, South Africa, 20 September 2016. The ministry of education announced an eight percent increase of university fees following calls by student demonstrators of no increase. The demonstrations are set to continue. EPA/KIM LUDBROOK