Marikana on Edge: Occupiers ready to defend in housing showdown 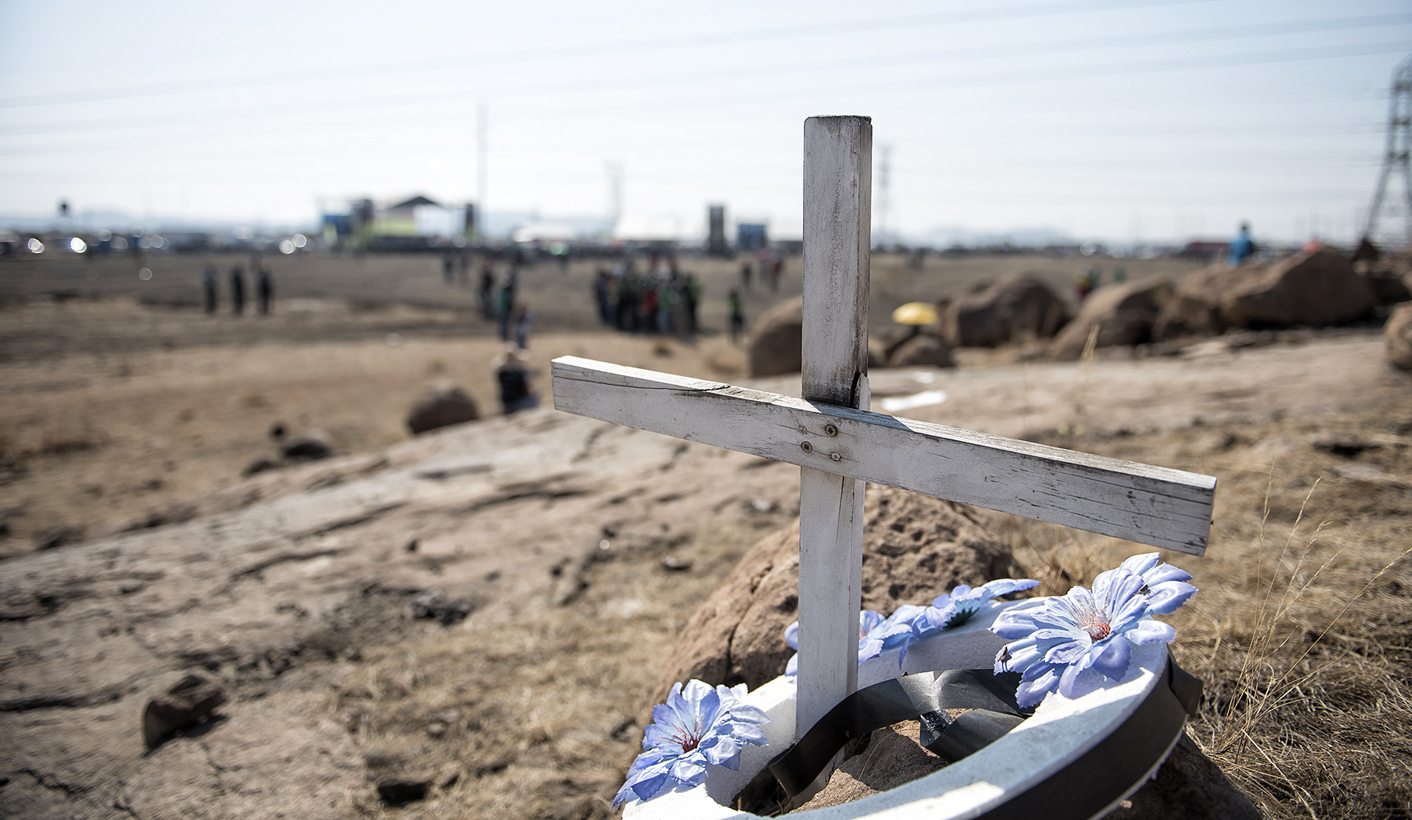 A showdown looms in Marikana as government today might begin evicting those who have occupied new houses on land donated by Lonmin. Occupiers insist they have a right to the housing, while government wants them to respect a recent court decision finding they don’t have a right to these houses. By GREG NICOLSON.

The North West Department of Local Government and Human Settlements is still considering whether to evict those who have occupied about 290 new houses in Marikana’s Extension 2 after a High Court order said the community must vacate the properties by Monday.

On Sunday, department spokesman Ben Bole said the government had not made a decision on whether it would evict the occupiers and was considering the implications of an appeal lodged in the Mafikeng High Court. Bole called on residents to move out immediately, regardless of their appeal.

The North West government has insisted those who occupied properties in the housing development have done so illegally and a court order against the occupants agreed. Rallying behind their right to stay, community members have lodged an appeal and say they’re ready to fight any attempts to evict them. Housing is in short supply in Marikana and since the 2012 Marikana massacre tensions between the community, mineworkers, government, Lonmin and police have remained high.

Activist and community organiser Napoleon Webster on Sunday was meeting with occupiers of the housing units. They have lodged a court appeal, he said, to be heard on 21 October, which should halt any attempt to evict residents this week. “But you know these people. These people are thugs,” said Webster. “We’re physically, emotionally and spiritually ready to fight.”

Many of those who have occupied the homes work at Lonmin, where the memory of the Marikana massacre is prevalent, and in part the battle over housing appears to reflect the ongoing struggle for mineworkers to access decent housing.

As an Amnesty International report on Lonmin workers’ access to housing explained, the government’s Breaking New Ground housing development, built on 50ha of land donated by the company, is aimed at people below a certain income threshold, so Lonmin employees do not qualify.

Webster, however, said the issue was not about whether mineworkers or other community residents qualified for the housing, but who was on the list of beneficiaries set to get houses.

“Of course, they were ANC people,” he said.

The ANC government in Rustenburg had rewarded its members, some not even from the community, and wanted to give them houses, he alleged. Allowing occupiers to stay could lead to a pilot project across the country combating systems of ANC patronage, he continued.

The Economic Freedom Fighters Limpopo Chairwoman Betty Diale agreed. She said government did not follow the right procedures in putting its list of beneficiaries together and wants to evict occupiers despite their right to housing. The party has offered support for the occupiers in their court attempts to live in the houses. Diale said she hopes the state will come to its senses and “not evict people like they’re not South Africans”.

Bole, from the province’s Department of Local Government and Human Settlements, said the process of allotting residents to houses was above board. “We don’t just build houses and go and look for beneficiaries,” he said, claiming beneficiaries came from a list prepared by the Rustenburg municipality, which was checked by the provincial government. Bole said there was extensive community engagement on who would benefit from the development and they proceeded after holding public meetings where the names of beneficiaries were read out and approved.

The department is still deliberating on whether it can evict the occupiers and North West Premier Supra Mahumapelo has in the past been adamant that approved beneficiaries must be allowed to occupy the houses.

“It cannot be correct that we allow lawlessness,” said Bole on Sunday.

One of the challenges appears to be the division between Marikana’s migrant mineworker community and long-term residents. Given the intense distrust of police, government and the ANC, any attempt to evict mineworkers or those from their community, especially if they believe legal processes have not been followed, risks leading to violence.

Webster maintained that occupiers cannot be evicted until their appeal is heard, but, suggesting the government and ANC is capable of anything, he remarked that President Jacob Zuma, despite his scandals, and Deputy President Cyril Ramaphosa, despite his links to the Marikana massacre, keep their positions. He said those occupying the houses had all recently contributed R400 to pay for legal fees.

In their past court papers, occupiers said there was not an extensive engagement process on the state’s attempt to evict them, but the court said they were quiet on the government’s listed attempts at engagement.

Considering Lonmin’s past failures to meet housing obligations for workers, one of the key issues in this case is the impression created, or at least perceived from the side of mineworkers, that the 50ha donated to government would be used to improve issues for workers. Some of the workers who were injured or are related to the killed workers in the 2012 Massacre are reported to be occupying the new houses.

The issue of housing is critical both to the broader community and Lonmin workers. The report of the Marikana Commission of Inquiry found Lonmin and government’s failure to address workers’ housing issues “created an environment conducive to the creation of tension and labour unrest”. The recent Amnesty International report on mineworkers’ accommodation at Lonmin, looking at how and why the company fell far short of its Mining Charter obligations, said workers’ living conditions were mostly defined by the squalid informal settlements. Amnesty wrote:

“The housing at Nkaneng, built from tin sheets and scrap materials, abysmally falls short of even the most basic requirements for adequacy of housing. Although Lonmin knows this, it has failed to take any meaningful action to address the situation. Its litany of excuses expose a company that has little genuine interest in tackling a major problem confronting its workforce, a problem that is inextricably linked to the way Lonmin, and South Africa’s mining industry in general, operates.

“The serious failures documented in this report could not happen if the government of South Africa enforced the legal provisions it has put in place to address historical discrimination and disadvantage in the mining industry. However, the government has allowed Lonmin to flout the law, seemingly without consequence.”

Bole on Sunday said the government understands the demand for housing in general and in the area.

“We understand fully that the need is very high,” he said.

He claimed government was doing the best it could with the resources available. DM

Photo: A cross stands on the ‘koppie’ or hill at where 34 miners where shot by South African Police Forces on 16 August 2012, during a protracted wage negotiation strike in the platinum mining area, near Rustenburg, South Africa, 16 August 2015. EPA/SHIRAAZ MOHAMED