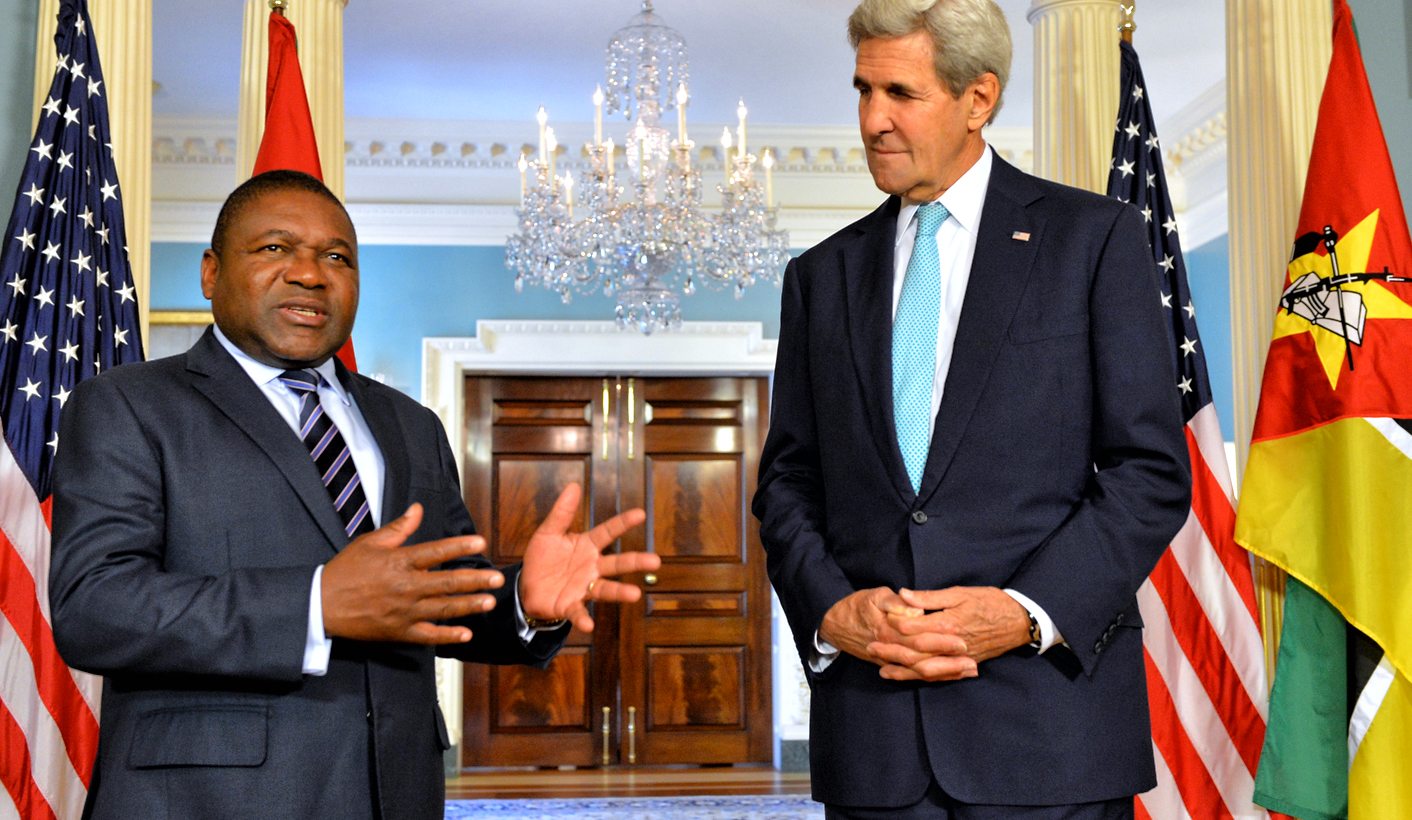 Filipe Nyusi is in the US capital for delicate talks with the International Monetary Fund, and to receive a Congressional award for his personal contribution to conservation. While there, he faces awkward questions about Mozambique’s misuse of international loans, and the ongoing conflict with Renamo. By GEOFF HILL.

US Secretary of State John Kerry gave a special welcome on Wednesday to President Filipe Nyusi of Mozambique as he landed in the US capital for talks with the International Monetary Fund (IMF).

“Mozambique happens to be the place of birth and where my wife, Teresa, was raised and lived for many, many years before she came to America,” Kerry said.

That didn’t stop him laying out the worries Washington has about a country which last year received more than $200-million in US aid. Mozambique had a “serious challenge”, he said, “in terms of its economy and the need for transparency and accountability”.

In 2014, without consulting donors or the IMF, Maputo negotiated a number of secret loans from banks, including Credit Suisse. Already in debt, the new money has taken total owings to more than 80% of GDP.

The loans were signed before Nyusi took office last year, replacing president Armando Guebuza, who stepped down after two terms as required by the constitution. Guebuza wanted a third, but was knocked back by the ruling Frelimo party, in power since independence from Portugal in 1975.

Nyusi has said he is not opposed to a forensic audit of the debt and there is speculation this may be aimed at weakening his predecessor’s grip on the party.

While in Washington he will receive a Congressional award for his personal work in conservation. A qualified engineer, Nyusi speaks passionately about the environment.

Also in town were actor Leonardo di Caprio and oceanographer Philippe Cousteau, at a conference on marine life and why some fish and sea mammals are being pushed to extinction. President Barrack Obama, Kerry and Britain’s Prince Charles are all due to speak on the issue, a welcome distraction as the US braces for the first debate between presidential candidates Donald Trump and Hillary Clinton.

Mozambique loses more than $63-million a year to illegal fishing in its waters, mostly by trawlers and factory ships from Asia.

And while the loans have caused a headache for Frelimo, some of the money was spent on patrol boats that have been delivered and certified as fit for purpose. Until now, Mozambique has lacked capacity to deal with poaching at sea, but the new boats will be able to confront the pirates and tow their vessels back to port where, under international law, ships fishing illegally are liable to confiscation.

Nyusi’s other problem is the ongoing war with Renamo that has damaged the once lucrative tourism sector. Renamo leader Alfonso Dhlakama claims elections have been rigged in favour of Frelimo and seeks a federal system with more autonomy for the north and centre of the country where he enjoys support.

Nyusi himself hails from the north and has committed his government to ending the conflict. However, in his welcome speech, Kerry expressed concern at “levels of violence that have taken place in dealing with the opposition.”

For his part, Nyusi played the diplomat. America, he said, “has a lot of experience in democracy, transparency and best practices, and we will be sharing those… and learning from one another.”

In Washington he addressed a business lunch hosted by the Corporate Council on Africa and he was due to fly to Texas on Friday for talks on oil and gas reserves discovered near the border with Tanzania.

His lunchtime address on Friday will take place in the former Houston home of president George Bush, now an exclusive resort.

At the end of his opening session with the secretary of state, Nyusi hinted that, given his wife’s place of origin, John Kerry might qualify for a Mozambique passport.

The comment drew laughter from officials and the Press. In his short time as president, he has built a reputation for charm and tact – and he will need both in selling one of the world’s poorest nations to a country focused on its own elections. DM

Photo: US Secretary of State John Kerry and Mozambique President Filipe Jacinto Nyusi address reporters after a meeting at the US Department of State in Washington DC on September 14, 2016. [State Department Photo/ Public Domain