Kazakhstan: Despatch from a nuclear wasteland 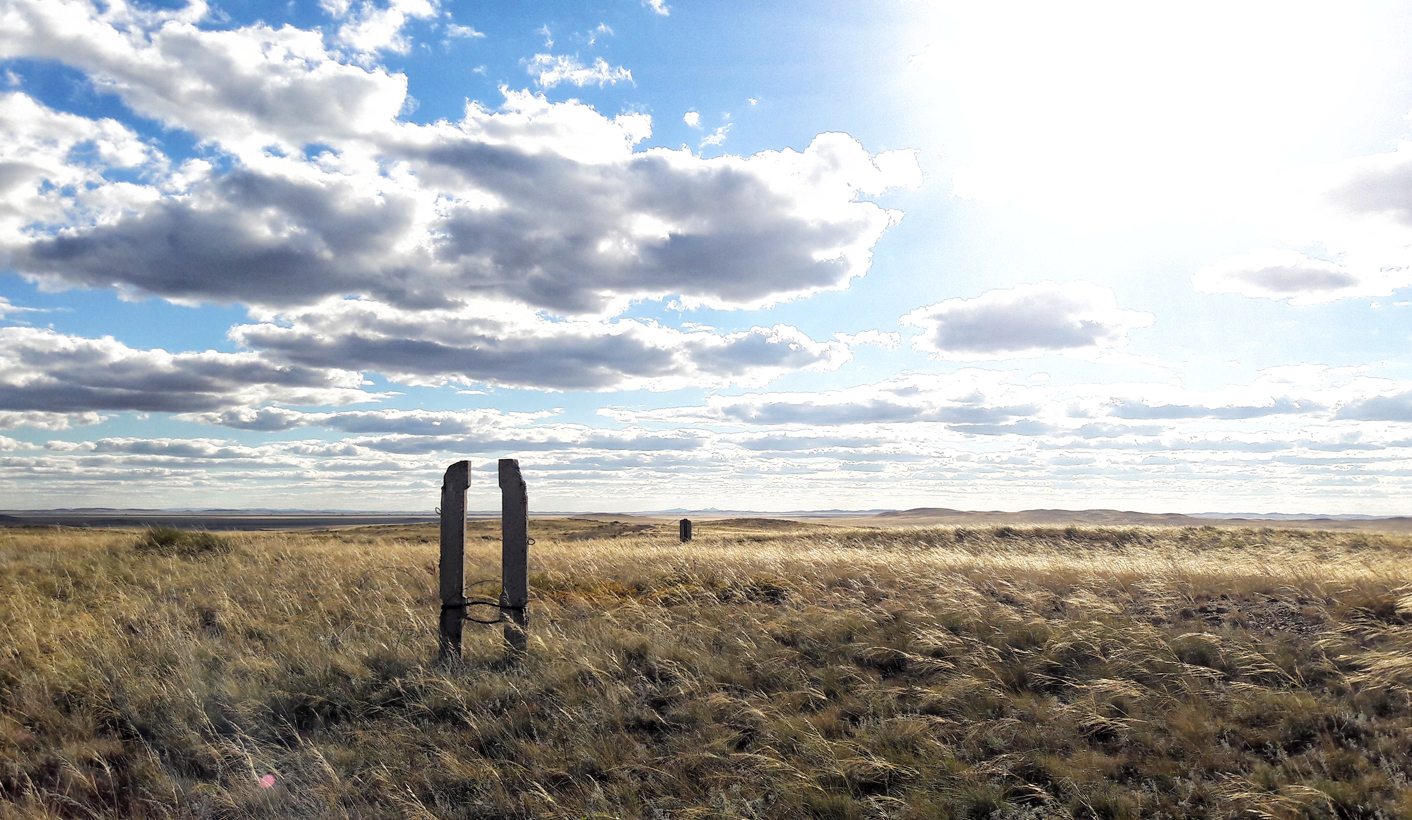 In the Soviet Union, Semipalatinsk did not officially exist. It was top secret, unmarked on any map. For good reason. It was here, in the steppes of north-eastern Kazakhstan, on the remotest edge of Siberia, that the USSR conducted its nuclear testing programme. Nearly three decades after the last bomb went off, SIMON ALLISON reports on what was left behind.

It’s late afternoon in a field outside Kurchatov, in north-east Kazakhstan, and the sun is shining on an idyllic, pastoral scene: the hills roll gently towards the distant mountains, and the wild grass waves in the gentle breeze.

But something’s not quite right. I’m wearing a face mask, and my shoes are covered in plastic. There are strange, hulking concrete edifices on the horizon. And the man next to me is holding a Geiger counter, watching intently as the numbers keep creeping up.

Even though it doesn’t quite look the part, I’m standing in the middle of a nuclear wasteland.

From 1947, until just before the Iron Curtain was raised, this was the Soviet Union’s primary nuclear testing site. The few who knew it existed called it the Polygon; now it’s known as Semipalatinsk. Here, on the grasslands, and in tunnels bored into the mountains, scientists watched and took careful notes as 456 nuclear bombs were exploded over an area roughly the size of Israel, in what amounts to the most violent nuclear assault in human history.

Some of the tests were to see if the bombs actually worked. Others were to measure their impact. Around this particular Ground Zero, where I’m standing now, an army of gulag prisoners built a ghost town complete with hospitals, schools, apartments, military fortifications, and animal pens. On testing day – there were four such days here –  the pens would be filled with live sheep and cows. Authorities firmly deny that any prisoners were used as human test subjects.

Nothing survived. All that’s left now is a shallow crater, the remains of the reinforced concrete measuring posts in which scientists placed their equipment, and the odd piece of scrap metal rusting in the ground. I poke one with my foot. “Careful,” warns a soldier. This is still a restricted zone, and a military escort is required. “Radiation.”

I peer over his shoulder. The Geiger Counter reads 7.01 millisieverts, which is about 14 times higher than normal background radiation. A few minutes’ exposure won’t kill me, but I shouldn’t touch anything I don’t need to. And, I’m told, I must shower and wash my clothes as soon as I return to the hotel.

Our guide is Yuri Strilchuk, a lavishly bearded nuclear physicist from Kazakhstan’s National Nuclear Centre in nearby Kurchatov (named after Igor Kurchatov, the father of the Soviet Union’s nuclear programme). Strilchuk is just about old enough to have worked when Kurchatov didn’t officially exist. Despite a population at its height of 70,000 people, it was a secret city, off the maps and off the books, so highly secret that if was mentioned at all, it was only by code name: Moscow-400, or Semipalatinsk-21.

Photo: A bust of Igor Kurchatov, the father of the Soviet Union’s nuclear program, outside the Kazakhstan National Nuclear Centre. (Simon Allison)

It was a golden era for nuclear physicists, and Strilchuk looks almost wistful that he missed most of it. I speak to one scientist who was part of that generation, not in Kurchatov but in another of the Soviet Union’s top secret cities. To this day, Joseph Kott won’t say where exactly he worked, or what exactly he was doing. In slow, deliberate English, he says: “It is classified.” Still? “Still.”

Kott is old and liver-spotted, and suffers from thyroid problems – a consequence of working too closely with radiation, he says. He trained in nuclear physics in Czechoslovakia, and was then drafted into the scientific elite. Now he campaigns for nuclear disarmament, but he can’t help but smile as he remembers what it was like when the Soviet Union’s best and the brightest were given free rein on ideas and experimentation, with little thought given to budgets or to the consequences of their research.

I ask him if he regrets being part of a programme that caused so much suffering. He thinks for an uncomfortably long time. “It was history,” he says.

It is now Strilchuk’s job to assess the long-term impact of that history; to figure out just how badly radiation has damaged the area. His team must decide which bits are safe for farming or human habitation, and which bits will never be. It’s an exhaustive, expensive task. In two decades, they have only managed to survey one-third of the Polygon. Much of it is unusable, even if everything looks fine on the surface.

That’s the trouble with radiation: you can’t see it, and its impact may only manifest decades later. Even now, Strilchuk is not convinced that there’s a direct connection between all those nuclear bombs and the high rates of cancer and other diseases among nearby populations. “It’s difficult to draw the link between the tests that happened so long ago and the manifestations of diseases today,” he says. Strilchuk also maintains that the effects of the radiation were confined to the boundaries of the Polygon, and that surrounding towns and cities were not affected.

Strilchuk echoes the official Soviet line, which said that the area was uninhabited and that any stray villagers or nomads were evacuated before testing began. This was simply not true; nor is Strilchuk’s assertion that the contamination was contained.

A study conducted by Kazakh and Japanese doctors in 2008 found that some villagers were exposed to up to 2,000 millisieverts during the years of testing. In the broader eastern Kazakhstan region, they found that rates of cancer are 25%-30% higher than in the rest of the country, and that there is a higher chance of mental deficiencies in children of parents exposed to radioactive fallout. In nearby Semey, museums display gory exhibits of deformed foetuses that show the devastating consequences of the city’s proximity to the test site: there, pickled in formaldehyde, are pairs of Siamese twins and one-eyed babies in jars.

Photo: This nuclear control station, as displayed in the Kurchatov Museum, was used to set the test explosions. (Simon Allison)

When the Soviet Union formally broke up in 1991, newly independent Kazakhstan – led then as now by President Nursultan Nazarbayev – had some tough choices to make. Not only was it in charge of the Polygon, but it was also responsible for 1,410 nuclear warheads that had been left in military bases all over the country. At the time, this was the world’s fourth-largest nuclear arsenal.

To his credit, Nazarbayev shut down the Polygon and renounced the nuclear weapons, sending them back to Russia. This decision is a major source of pride in Kazakhstan, and central to its foreign policy: along with Japan, Kazakhstan is a major leader of the nuclear disarmament movement.

The cause is not as hopeless as it may seem. Sure, the nuclear powers are in no hurry to give up their weapons, but relentless international pressure has forced them to reduce their stockpiles and halt all testing. In the 21st century, the only country to conduct nuclear tests has been North Korea, which is largely impervious to international norms anyway.

It’s only in Semipalatinsk – and in other test sits around the world, like the Marshall Islands, Bikini Atoll, Lop Nur and Nevada –  that the scale of that victory becomes apparent. The consequences of nuclear testing are lingering and insidious, poisoning the gene pool for generations. Although it may take decades, or even centuries, Semipalatinsk has been given the chance to recover. There is yet hope for this particular nuclear wasteland. DM