Gigaba says No to US ‘hate’ pastor, but challenges remain 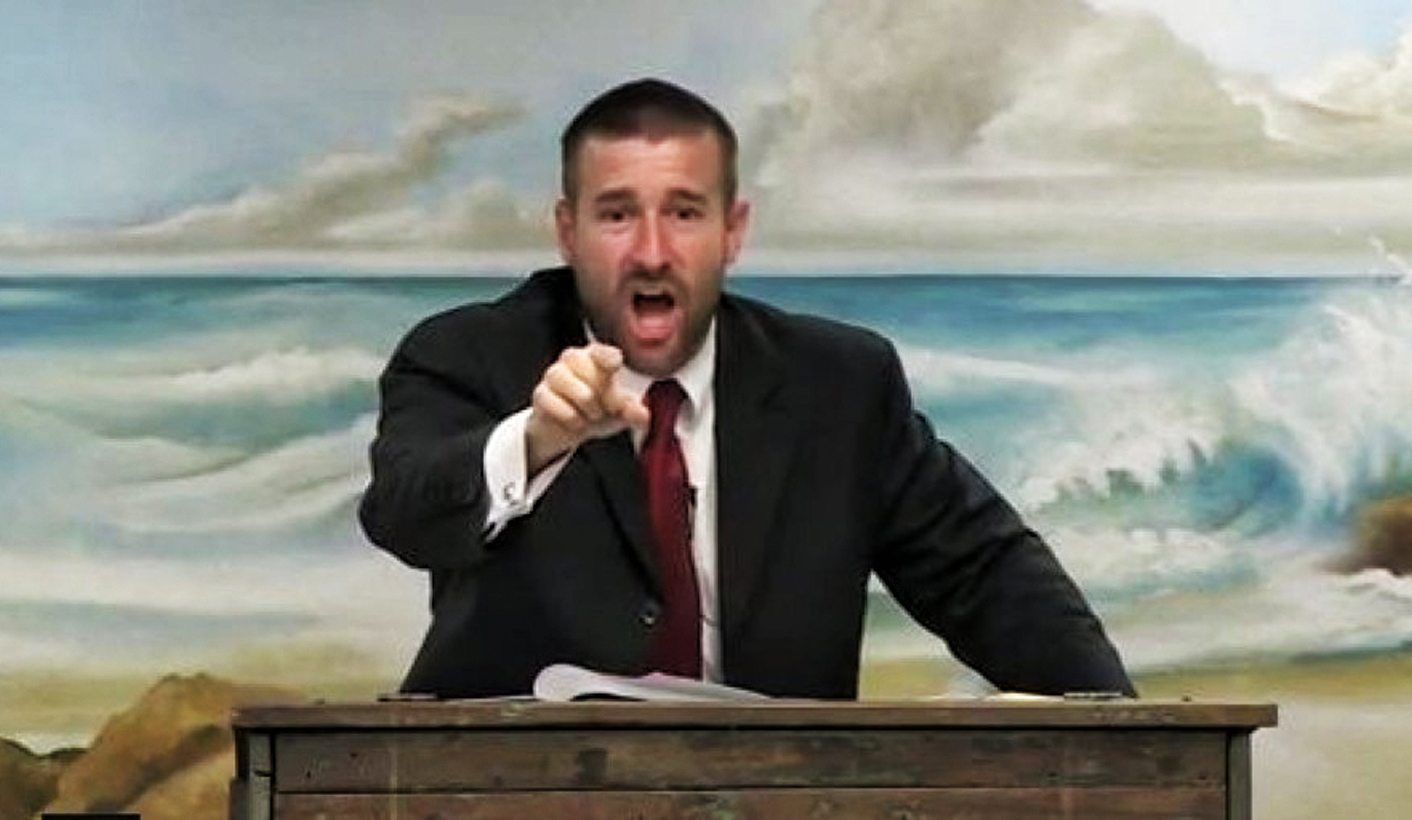 American pastor Steven Anderson won’t be allowed into South Africa. But Anderson is a small-time pastor with bigoted views. The more worrying aspects his planned visit has raised are the problems within the country. Gigaba pointed out in his speech on Tuesday that South Africa faces its own fight on the acceptance of some sexualities. By GREG NICOLSON.

In May, Steven Anderson posted a video on Facebook. “Yes, you heard me right, we’re gonna be in South Africa. Soul-winning marathon. It’s going to be on Sunday September 18.” A member of his church was moving to Gaborone as a missionary and Anderson planned to help him get established. “Since we’re going to be in that part of the world anyway, and I know there are a lot of people who listen to the sermons from Faithful Word Baptist Church that live in South Africa, so we’re going to do a soul-winning marathon in Johannesburg.”

Home Affairs Minister Malusi Gigaba on Tuesday announced that Anderson and his associates would be prohibited from entering South Africa after lesbian, gay, bisexual, transgender, queer and intersex (LGBTQI) groups lobbied government to bar him, saying Anderson spreads hate and intolerance, which is contrary to South Africa’s Constitution.

Anderson is best known for his response to the shooting at a gay club in Orlando, Florida, where 49 people were killed in June. He was quoted as welcoming the murders, expressing disappointment with how many people survived, and saying “there’s 50 less paedophiles in this world”. Anderson has repeatedly referred to gay people with extreme hate and supported violence against them – even execution. The Faithful Word Baptist Church pastor talks of proselytising as a battle, often characterising “the enemy” as “sodomites”. Anderson wears a “straight pride” T-shirt on his Facebook page.

As the issue over his visit to South Africa was raised, Anderson was quoted on radio commenting on the LGBTQI community:

“The Bible is crystal clear that these people are an abomination, that they are filthy, vile and dangerous, violent people. The Bible says that they are worthy of death.”

Anderson’s wife has in the past attacked a South African blogger for using IVF to conceive a child, suggesting that African women who cannot have children were responsible for their own fertility issues.

“Besides, maybe instead of handing out condoms like candy, these people should be taught not to live like animals and sleep with everyone and everything that moves,” wrote Zsuzsanna Anderson.

In Johannesburg, Steven Anderson had planned to speak to supporters at branches of Wimpy and Spur in Kempton Park, before delivering a sermon. Organisations such as Growthpoint Properties, Spur, Wimpy and the Premier Hotel OR Tambo said he was not welcome to meet or stay at their venues. His latest plan was to meet supporters in a car park near a cafe on the East Rand, start the “soul-winning marathon”, and deliver a sermon later at a venue that would not be disclosed.

Faithful Word Baptist Church, which is based in Arizona, has a video describing “basic soul-winning”, featuring Anderson, on its website. It seems to include door-knocking, citing a lot of Bible verses, and getting people to devote themselves to Jesus Christ through a prayer to ensure they will go to heaven.

Two online petitions were launched, drawing over 60,000 signatures, calling on Gigaba to stop Anderson from coming to the country. As Gigaba engaged the civil society groups, suggesting he might not be able to bar Anderson from entering the country, the Baptist Union of Southern Africa publicly distanced itself from the American church. The Evangelical Alliance of South Africa condemned Anderson’s “gay-hating attitude”, worrying that his visit could lead to the spread of hatred in South Africa.

Last week, Anderson posted a video – looking as though he was driving a minivan with his children – on the calls to ban him from South Africa. Calling Gigaba “minister Jigaba”, he said, “If he was going to ban me he would have done it months ago. But he’s just stringing these sodomites along and it’s funny how they don’t pick up on it.”

He claimed SA couldn’t legally deny him entry as the law prevents discrimination but also protects religious freedoms. He never planned to preach against “homos”, said Anderson, but said that those who hate Jesus, the “wicked politician” and “wicked media”, had distorted the story. His plans would proceed, he said, while he called Gigaba backward “because you’re the one that thinks a dude should be with another dude”.

In a recent sermon, Anderson has said there aren’t many Christians in South Africa defending him and supporters here aren’t easy to find – “the lameness of Christianity in South Africa, it’s really just a joke”. There were “freaks and weirdos” trying to help, he said, but those who shared his views were reluctant to step forward. It isn’t easy finding supporters of Anderson in South Africa. Rev Oscar Bougardt, a Cape Town pastor, has backed him, but it’s unclear whether he actively promoted his visit.

A blog called Dean Ministries, run by someone who was raised in the Netherlands and UK before moving to South Africa, repeatedly expresses admiration for Anderson. “Still, for years I was a bit lukewarm; as you would expect when you lack a real preacher and some hard preaching,” the writer said of his move into religious devotion. “So thank God I found Pastor Steven Anderson online, and some like-minded Pastors.”

Despite attempts to appear reasonable, the blog is blatantly homophobic, repeatedly racist and heavily anti-Semitic. Apart from his homophobia, Anderson is also known for his documentary Marching to Zion, which paints Jewish people as a world-controlling, evil force. Dean Ministries interchanges “Zionism” with “the Illuminati”.

Anderson’s visit, however, also received support from Business Day. In an editorial on Tuesday, the paper did not endorse Anderson’s views but noted that the Dalai Lama had been denied entry into the country while the government protected Sudanese leader Omar al-Bashir on his visit. It suggested that considering the government’s “flip-flopping” over the issues, Anderson should be allowed into the country, and that SA’s democracy could withstand, or be tested by, what he brings.

“Anderson should be allowed to visit. If he indulges in hate speech, then he should be charged. If he undertakes remunerated work without a work permit, then his expulsion should be considered. But let him come and let SA debate it,” said the newspaper.

Unfortunately for Business Day’s position, Anderson will not come to SA.

“Victory! Anti-gay US pastor Steven Anderson was banned from entering South Africa,” a petition on the All Out movement’s website posted in an update on Tuesday. “We’ve seen how US religious extremists have fuelled violence and hate against LGBT people in other parts of Africa,” All Out executive director Matt Beard was quoted as saying. “It’s inspiring to see that the South African Government has made a stand for human rights and for the protection of their hate speech laws and Constitution.”

On Facebook, Anderson said, “I have been banned from South Africa AND the United Kingdom. I am not even allowed to have a connecting flight in London.”

Quoting scripture, he added, “blood be upon your own heads”. Anderson has been positive about his church’s expansion in Botswana and added, “I feel sorry for people who live in South Africa, but thank God we still have a wide open door in Botswana. Stand by for reports of MULTITUDES saved in Botswana, where religious freedom still exists.”

There’s been a lot written about American churches’ involvement in demonising various sexualities in Africa, and Anderson’s group are still confident that “Brother Garrett Kirchway” will still be able to proceed in Gaborone.

The Dean Ministries site on Tuesday expressed deep disappointment that Anderson wouldn’t be able to visit the country, with a post defined by homophobia, racism and bigotry.

“Go ahead, ANC terrorists. Go ahead, sodomites. Rejoice today! Carry on drinking booze, carry on in adultery and fornication, carry on harassing and terrorising God’s people. Enjoy what few years you have of your miserable lives; for you shall burn forever in everlasting damnation! And God’s people shall rejoice in your destruction!!!” it said.

But Anderson is a small-time pastor with bigoted views. The more worrying aspects his planned visit has raised are the problems within the country. Gigaba pointed out in his speech on Tuesday that South Africa faces its own fight on the acceptance of some sexualities.

“We still have problems, and we must be honest and understand that merely preventing Steven Anderson’s visit will not solve all the problems we face in this country, on the continent and the world regarding discrimination, homophobia and patriarchal notions of power,” said the minister.

He pointed to the ongoing abuse of those who don’t conform to gender norms and how generally South Africans view same-sex activity as wrong.

“We are still to fully ascend to our constitutional heights of tolerance and equality. What is written in our Constitution and laws is not always emulated in our daily lives. So while we praise the Constitution as the supreme law of the country, we sometimes find ourselves contradicting its essence through discrimination and sustaining inequality,” said Gigaba.

“South Africa has to work towards reaching its constitutional values, to build a democratic, united, non-racial, non-sexist and prosperous state. It is a constitutional imperative for organs of state and society at large to protect and jealously defend the rights of all people.” DM