On free education and feminism: Angela Davis embraces the struggles of SA youth 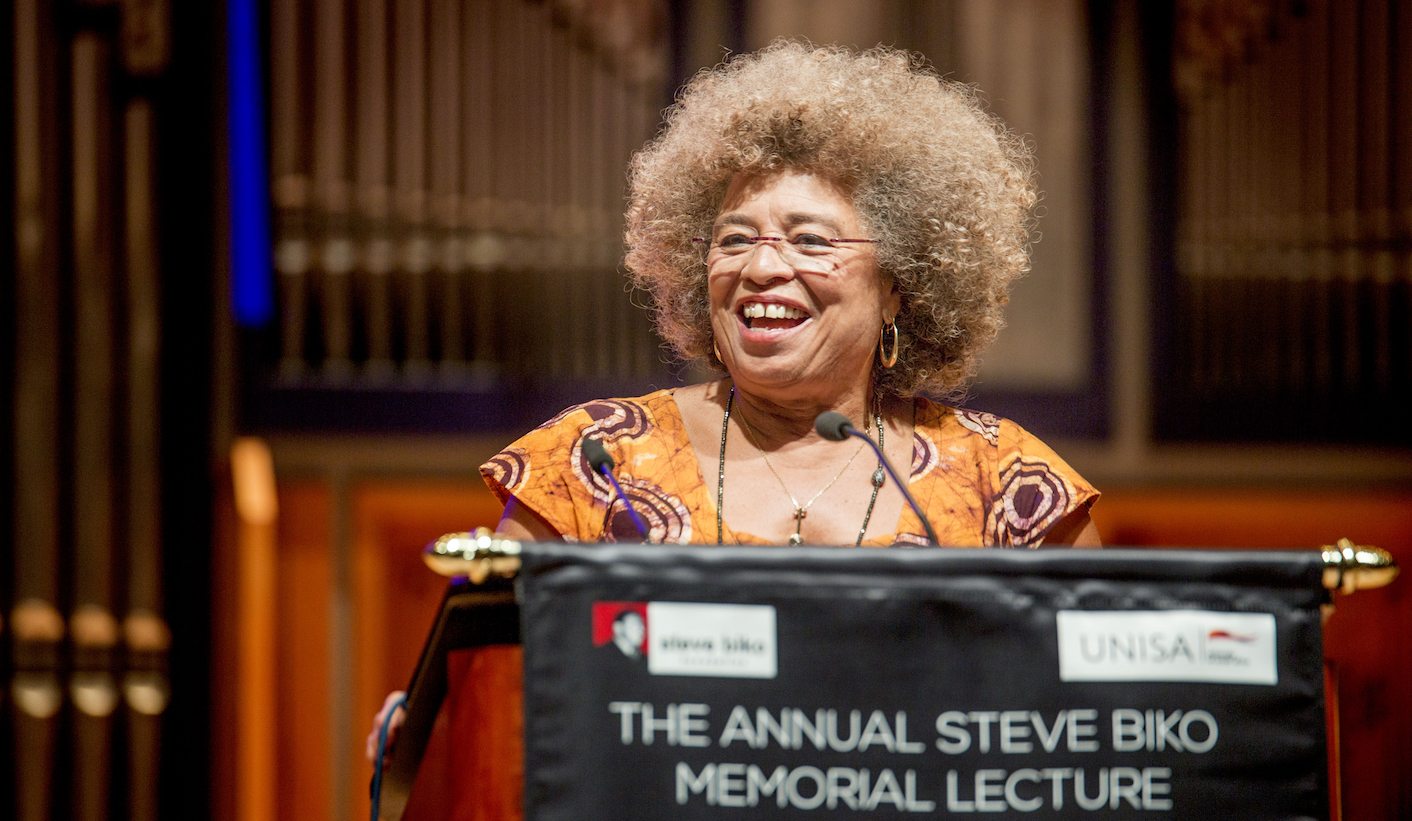 On 12 September, 1977, Stephen Bantu Biko was brutally tortured and murdered at the hands of security police in a prison cell in Pretoria. He was only 30 years old. A founder of the South African Students Organisation (SASO) and leader of the Black Consciousness Movement (BCM), Biko stressed the need to liberate the black mind from the shackles of racial and economic oppression.

Almost four decades later, his life and death have come to represent an  unparalleled  commitment to black liberation and collective struggle. Just a few kilometres from the prison cell where he was detained, Davis spoke to his legacy, saying:

“Biko  offered us a politics of blackness that released it from the constraints of inferiority and let us know that black people could collectively embody humanity and the foundational impulse towards freedom.”

Her address could not have arrived at a better moment. Internationally, movements such as #BlackLivesMatter have seen a resurgence in  collective struggle. Locally, the re-emergence of Black Consciousness ideology has powered youth demonstrations such as #FeesMustFall and the recent protests at Pretoria Girls High School.

Davis came out in full support of the brave young women who have put discriminatory codes of conduct and racist language  policies  at Model C schools on the national agenda.

“The girls at [Pretoria Girls High] have a platform and they should use it,” said Davis, who called the young women on stage during her address.

“I was very impressed when [Zulaikha Patel] was asked to come on to the stage and she refused to come alone – she came with her sisters. And so if that kind of attitude could extend to the other schools, I think that it would be a profound example of using the arena that accorded of them to broaden the terrain of that struggle.”

Davis covered a range of topics during her address, including mass incarceration, the dangers  that come with the possibility of an American Trump era, and self-love during the process of disruption, protest and revolution. The Black Panther activist also paid close attention to issues of gender and the LGBTI community in activist spaces and championed the struggle for free education.

“The demand for free education is only unrealistic because we continue to live within the mandates of capitalism,” she said.

Veterans often take themselves too seriously

Davis spoke critically about the previous generation of activists, comparing them with the youth who currently work to decolonise and disrupt colonial institutions:

Davis nonetheless argued critically for the place of the older generation in activist work, and the power of youth and being allowed to “make mistakes”:

“The young activists want to reveal the erasures, they want to question what we did not have the full capacity to question in our time. Therefore they make terrible mistakes, just as we did at their age. But just as we’ve learned from our mistakes, they must be allowed to learn from theirs… Veterans often take themselves and their knowledge too seriously.”

Being black behind bars

Highlighting what she referred to as “unfinished activisms” and contemporary struggles for justice,  Davis encouraged students to pursue their protest action, and relayed personal experiences of recent struggles while drawing attention to  mass incarceration in the United States and  advocating for the abolition of prisons.

“There are more black men in prison and under the control of the criminal justice system than there were enslaved in 1850. In the 1990s, very few people wanted to hear about the prison predicament.”

Davis said  human rights issues around mass incarceration have been brought into the public imagination as a result of activists and academics working together to create a new vocabulary around emerging issues.

“There came a point in 1998 when the number of people incarcerated in US prisons reached one million. Now there are almost 2.5-million. And we thought that when that happened, people would wake up. But it took several decades of intense organising, and many of us were considered to be crazy when we called for the abolition of prisons.

“When we call for the  abolition  of imprisonment, we’re not calling for a simplistic demand. We  recognise that this is a call to transform society, this is a call to create a society that no longer needs to lock people up. When one looks at the majority of people in the US today (there) are people who have not had the opportunity to get an education… there are people who have been subject to gross economic injustices.

“So it’s not simply a demand to abolish prisons and leave everything else the same. It’s the demand to rethink and remake and recraft our societies.”

Be one step ahead

The human rights violations that exist so comfortably alongside solitary confinement and incarceration  struck close to home, with the correctional services system being responsible for the murder of Biko, one of our most prominent black thinkers and figures. The Black Consciousness leader was a young man when he was tortured and killed at the hands of the security police, but his ideologies live on in the re-emergence of youth protests 22 years into our democracy.

Davis said students should be “one step ahead” when attempting to disrupt the discourse by relaying the urgency of social injustices, while practising patience; and invited young people to “educate their imagination”.

“The struggles we’re referring to are not going to end in a month, or a year, or five years or 10 years, or maybe not even in your lifetime.  So we have to be prepared.” DM

Angela Yvonne Davis  was born in Alabama on January 26, 1944. She is an American political activist, academic scholar, and author. She emerged as a prominent  counterculture  activist and radical in the 1960s as a leader of the  Communist Party USA, and had close relations with the  Black Panther Party  through her involvement in the  Civil Rights Movement.  Her research interests are feminism,  African-American studies,  critical theory,  Marxism,  popular music,  social consciousness, and the philosophy and history of punishment and prisons.