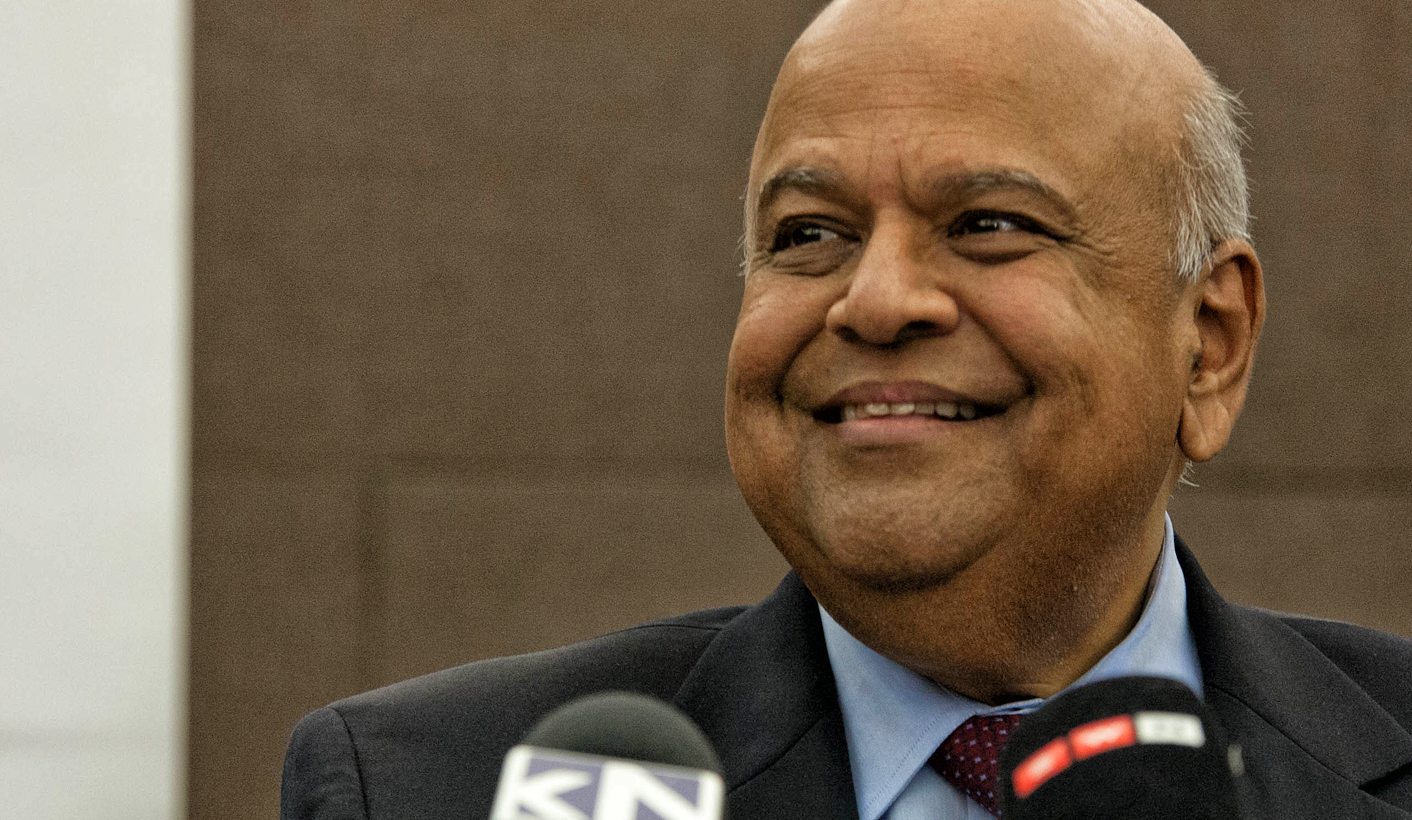 In the 1970s Pravin Gordhan trained as a pharmacist. If South African politics had not swept him into the arms of the South African Communist Party and the ANC, he would probably have made a great healer. Gordhan has, so to speak, a calm and confident bedside manner and an outwardly even temperament spiked with a droll sense of humour. As Finance Minister he is able to persuade ratings agencies and citizens – in the face of enormous political pressure – that everything is going to be okay. He is good medicine. Perhaps that’s why he was greeted with thunderous applause at the Open Book Festival in Cape Town on Thursday. By MARIANNE THAMM.

Pravin Gordhan is a disciplined member of the African National Congress. What that means is that in public he will aways be discreet and never air dirty (or in the current climate positively fetid) laundry. To decipher his occasional Morse code you need to know how to read between the lines.

This is, after all, a man facing severe pressure from various quarters within his own government and party. SARS Commissioner and good friend of President Jacob Zuma, Tom Moyane, lodged a charge against Gordhan and other former SARS officials with the Hawks in March 2015. Since then the Hawks, under Mthandazo “Bring me my helicopter” Ntlemeza, have been squawking and circling, leaving signs here and there that they are never too far away.

One of the NPA’s veteran investigators is sniffing around Gordhan and accounting firm Grant Thornton have been appointed by SARS (in a probe reportedly dubbed Project Lion) to conduct a forensic investigation of Gordhan’s modernisation of the revenue service implemented between 2007 and 2014. There have been threats to arrest him and he has been ordered to “present” himself for a warning statement, an order he rightfully ignored.

And while the President of the Republic of South Africa, Jacob Zuma, keeps issuing statements that he has full confidence in his Finance Minister, the minister himself says he is surviving on a week-to-week basis. He is a marked man who would just like to – as he keeps saying – “get on with the job”.

On Thursday a sanguine-looking Gordhan told a packed audience, “If you follow the rules of the game there will be no friction. And part of the rules of the game is that our job is to look after your money. Part of our job is to stand before an audience like this and say your money is spent in an efficient way and in the public interest at the end of it all. That is the job that we are trying to do. If somebody becomes uncomfortable with us doing our jobs in terms of the letter of the law, then it is not our problem, it is their problem. If we are reading the law incorrectly, then prove us wrong. If we are doing it the right way and it is creating discomfort, then then it is not our problem.”

Gordhan is, at present, the man who guards the keys to the country’s money box, a box a few seem intent on prising open by any means necessary. He and his team at  the Treasury are tasked also with overseeing the country’s State-Owned Enterprises, Denel, Eskom, SAA, and PRASA. It is a job that has brought him into conflict with those who view these as as their own personal fiefdoms. He is also the man attempting to cut back on unnecessary government expenditure and who has also set up a central procurement office for all tenders over R10-million to be reviewed. Some of those who have been feeding at the trough are, as is to be expected, not very happy.

The job of the Treasury, Gordhan said, particularly when it came to SOEs, was not only to take into account the spirit of the law [the Constitution] but also the letter of the law, to ensure that the Public Finances Management Act is implemented fully and that Treasury is responsible to the chief procurement officer. All of these “were the rules of the game”, he said.

Gordhan was interviewed by writer, journalist, political analyst and TV host Justice Malala as part of the Open Book festival programme at the Fugard Theatre in Cape Town on Thursday. Just a day before, Gordhan had “come out swinging” from Parliament after having responded to questions from the opposition. The takeout from Gordhan’s appearance on Wednesday (among a few other gems) was, “I stand here as a free, uncaptured individual – by anybody!”

No Morse code in that one.

In keeping with the theme of books, Malala asked the Finance Minister if he was reading any interesting ones.

“I must confess I read bits of books. But I am reading an interesting one by Jim Collins called How the Mighty Fall, published in 2009. It is very instructive for people in positions of influence and power who can very easily be subjected to the attractiveness of hubris. Then they become hubristic, too confident, too arrogant, then you fall.”

In a nutshell, Collins sets out five stages in this fall:

And in applying Collins’ stages to President Jacob Zuma’s term of office it feels like the country is currently mired in a prolonged stage four.

On Thursday, Gordhan, replying to Malala’s question as to whether he saw anything in the ANC over the past 20 years that might reflect back on the issues highlighted in Collins’ book, was his diplomatic best.

“In 104 years the ANC has been through many different phases. The last 20 years should be seen in that context. Like any organisation, from time to time you have to confront reality. We have done extremely well but we are not completely in line with what the citizens wanted (he said in reference to the August LGE). Looking into the mirror as we do, gives us feedback. It tells you what the public like about you, what we don’t like about you and what we want you to change. We have to confront our weaknesses and build on our strengths”.

Responding to a question about rogue Minister of Mineral Resources Mosebenzi Zwane’s call for a judicial enquiry into South Africa’s banks, Gordhan said this had come about “in the context of one particular company [Oakbay Resources] who say they have been prejudiced”.

“We have had many engagements and on Friday there will be an answer to a parliamentary question where we will make public the number of interactions that we have had with this company as the Treasury. And the view we have taken is that if any one of us feels disadvantaged or prejudiced then the court system in South Africa has proved itself to be fairly effective. If there are serious complaints then go to the courts.”

(Advice directly aimed at the Gupta family no doubt.)

In relation to the new SAA board and the fact that President Zuma’s wing woman Dudu Myeni has been allowed to remain as the chair, Gordhan said she would only serve “one year” for “continuity between the old board and the new.”

“The chairperson will have to work with that team. Any notion that this person can carry on doing things that they might have been doing up to a time cannot continue. There is a Memorandum of Agreement between us and a script that we follow… The bottom line is to put together the right team that has the right competence and skills to run an airline, and yes, it will require financial assistance.”

Asked by Malala how it was uncanny that all trails in most of the controversies dominating headlines led back to the Gupta family, Gordhan replied obliquely that “we do need to recognise that most economic systems produce rent-seeking phenomena of one kind or another. The extractors, people who unfairly and improperly benefit… but what is far more important is that people need to see that public funds are utilised for 55-million people and not five.”

He added that Treasury was “acting in terms of the law but if people have something to hide they must not point fingers at Treasury. Comply with the law and all of us can get along as happy friends”.

Asked whether he thought he was “above the law” as some have charged, Gordhan replied, “No, no… you can arrest me now if you want to”, adding, “but what have I done wrong? That is the question. If it is through pure malicious intent then why must I submit myself? I have taken legal advice… I am not required to go there personally. All the questions have been asked, all the questions have been answered. In every piece of correspondence of substance between my lawyers and the Hawks and the prosecuting authority, there is a line there which says, ‘Should you require any further information, please contact us.’ They haven’t yet but they are welcome. I don’t have to be dragged through a cordon of press people just to show the world that the Hawks have got this chap here. So I am not above the law. Nobody should be above the law. And I think that is the wrong narrative.”

The real question, he said, was that SARS Commissioner Tom Moyane had laid a complaint with the Hawks.

“Since then we have had a newspaper [The Sunday Times] that carried out an 18-month campaign against certain individuals. At the end of the 18-month period that newspaper had apologised for what it had done because it didn’t have proof for some of the stuff that it was accusing people of. As we sit today, what is the problem? Who is accused of what? What motivates it?” DM