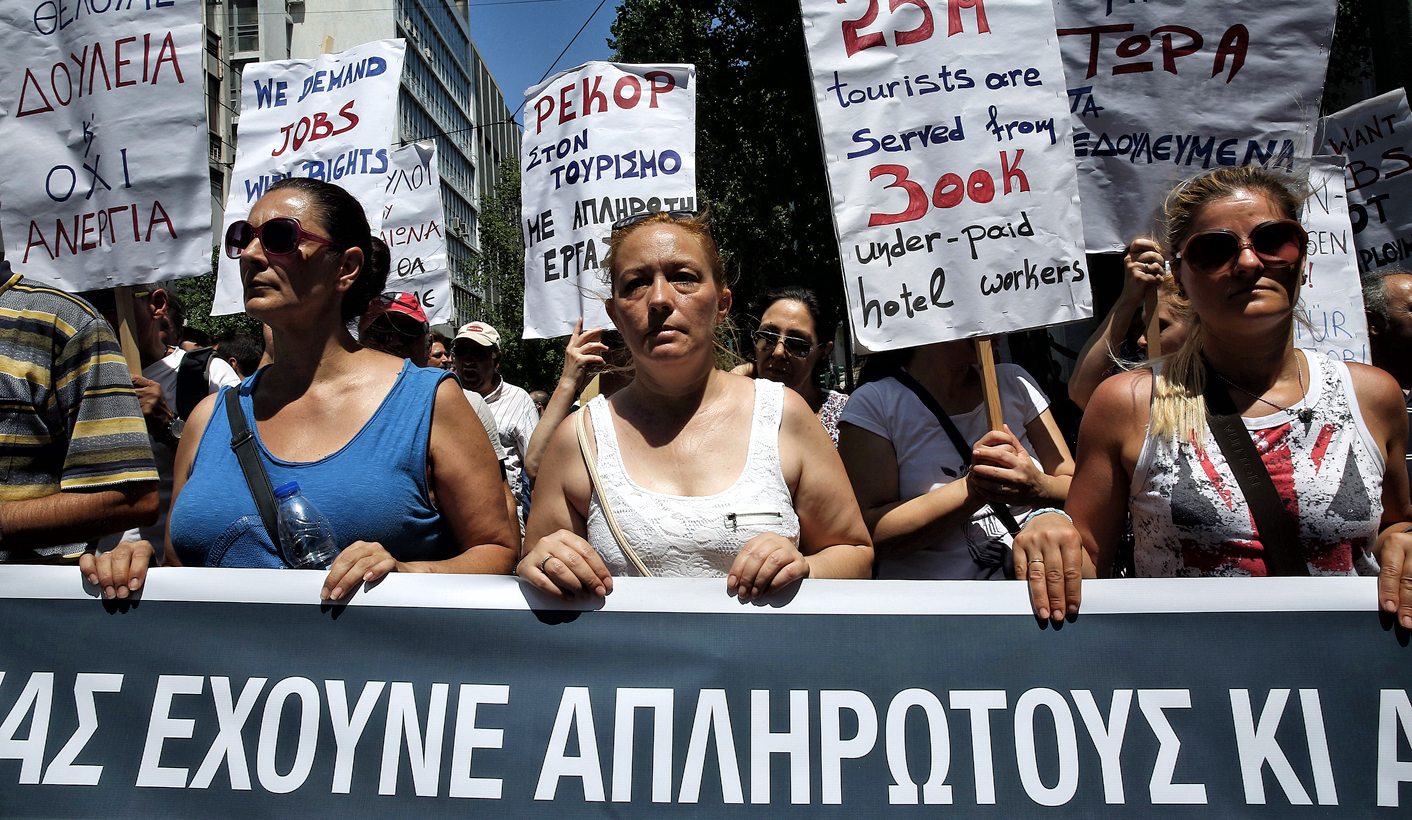 The statistics of the Greek crisis are well known. With the world’s second largest debt-to-GDP ratio at 177%, the volume of government debt is at $360-billion, the highest in the 19-member Eurozone, some $30,000 per capita. In 2012, the country launched the largest sovereign debt default in history, and three years later became the first developed country to fail to make a loan repayment to the International Monetary Fund. The Greek debt crisis is in the global Pantheon of financial catastrophes. By GREG MILLS and IOANNIS KOLLIAS.

One would have to be blind not to see the effects. There is a glut of empty commercial property across the country, and very few residential transactions. The volume of property transactions have fallen by as much as 85% and residential and commercial rentals are half of their peak. Along some stretches of prime waterfront outside Athens, more than one in three properties has ‘To Let’ pasted across the glass.

Photo: More than one in three properties has ‘To Let’ pasted across the glass. (Greg Mills)

To deal with the debt burden, tax has been hiked to an effective 60-70% of income, and still more if property taxes are factored in. As fewer people are employed, and the government is desperate to raise domestic sources of revenue to both pay back debt and keep the government going in the absence of external sources of funding, the tax burden has fallen hard onto an even smaller tax-paying segment. In 2014, one-third of households were estimated to be unable to meet tax obligations or keep up with mortgage repayments.

Photo: One would have to be blind not to see the effects of the crisis. (Greg Mills)

The immediate causes of the crisis, too, are clear.

The government borrowed heavily from the early 1980s, when debt was less than 50% of GDP, about the European average, to fund expenditures, especially pensions, now comprising half of government borrowing. The monthly salary and pensions bill is around $2-billion.

The former labour minister Tasos Giannitsis was among those politicians who warned the government, but were ignored. In 2001 he put forward a comprehensive proposal to reform the pension system, aligning current and future commitments with the likely workforce. The trade unions, opposition and, remarkably, his own centre-left Pasok party all turned on him, describing him as a “Cassandra”, the clairvoyant of Greek mythology, doomed to always be right, but never believed.

Professor Giannitsis was told he was spoiling the party, the bingeing blamed on cheap foreign money.

Deeper down, the contemporary Greek crisis reflects a sustained balance of payments problem. Put differently, Greece constantly imported more than it sold. The absence of tradable goods, the means by which countries get rich, has blighted the Greek economy.

The Greek trade deficit and budget deficit rose threefold to around 15% of GDP between 1999 and 2008, the widening gap funded by the discount on foreign borrowings facilitated by membership of the Eurozone in 2001, which had, ironically, reduced the country’s credit risk. Pathological tax evasion – and a failure to enforce tax rules – only fed this appetite.

Of course there are differences of opinion about who is responsible, and who should pay, hence the protests against the raising of government revenue and cutting of expenditure, essentially fiscal austerity. Some argue the bankers, the lenders, should pay as much as Greeks, hence the questions about the extent of their “haircut”. Others maintain that Greece cannot recover within the Eurozone, and that its only option is to depreciate – or monetise – its debt away through reinstating its own currency. The other alternative is to lower wages to become more competitive. Yet wages fell nearly 20% between 2010 and 2014, and the economy has hardly rebounded.

Whatever the arguments, the current burden placed on middle-class Greeks has given rise to the witticism:

“Hell is where the cook is an Englishman, the engineer is French, the lover Swiss, the policeman German, and the prime minister Greek.”

This hints at a deeper malaise, less apparent in the political discourse, but which lies within the national psyche. Failure to tackle the rules and habits of government, its interaction with the population, and vice versa, is a necessary aspect to enable deeper reforms of the system.

This requires, as the blogger and economist Aristos Doxiadis has noted, acknowledging the underlying realities of the Greek economy crisis in “the habits of rentocracy and of low-trust opportunism”. He notes that “clientelism and favouritism have been inherent in the modern Greek state”. Distributing such political rents, including foreign inflows, “was a necessary means of legitimation of politicians in the eyes of the electorate, and harvesting rents was a major egoistic reason for becoming a politician”.

Such trends have been amplified by the small size and low capital base of the average Greek business, which has preferred to disengage from the formal economy in the absence of obvious advantages to do so.

In essence, the incentives have produced – and been shaped by – the current system.

And the costs are great. As Doxiadis observes, “rent does not contribute to growth, it only shares in what is there. Therefore, it’s secured by militant claims, not by productive work.’ It also breeds populism, where citizens “‘feel entitled to demand more on grounds of fairness, or even on humanitarian grounds. They do not feel responsible about production of wealth, nor about setting priorities for redistribution to the truly weak. It is others who are responsible for the big picture”.

Pain may lead to some fundamental change, and progress. A recent poll by the conservative New Democracy party, which oversaw an increase in national debt in just five years from 2004 by €57-billion, shows that nine out of 10 citizens want the public sector to be cut and to lower taxes.

This requires instilling conditions of competitiveness, a challenge not unique to Greece.

Economist George Alogoskoufis links macroeconomic populism to “two of the most significant problems that have since burdened its economy: high public debt and low international competitiveness”. This is in turn, says the former finance minister, related to the intersection of high inflation and an inefficient state. “The rise in inflation in the 1980s can be explained as an ineffective attempt by the government of the time to use incomes, monetary and exchange rate policy, in order to improve living standards and reduce unemployment.” But “all that was left was inflation and loss of competitiveness”.

Especially during the 1990s, the Greek economy diverged in growth terms from the other members of the EU, as a result of populist policies and inadequate reforms.

Competitiveness involves a combination of factors, including the levels of investment in capital infrastructure, the performance of the public sector, policies, levels of openness, geography, and other less tangible factors, including mindset and ideology. The latter relates, inevitably, to history, which circles back to popular expectations of the role of the state as an employer of first and last resort.

Before the crisis hit, the state had 950,000 employees on the books until the recent cuts (for a nation of 11-million people), which has now been reduced by nearly 50%, although the problem is not the size as much as the generous pensions and benefits. Until these cuts, Greek pension spending was around 15% of gross domestic product, about 40% more than the UK, as one comparison. This is partly a function of the relatively young age of retirees and, overall, Greece’s ageing population. Compensation of the public service amounted to a further 12% of GDP in 2010.

The search for competitiveness inevitably involves thus cutting state excess. In 2013, before the latest bail-out deal, the state owned 74 companies, many overstaffed and loss-making. Many of these have reluctantly been put up for sale to unlock bailout funds. Fourteen airports have been sold to a German bidder, a Chinese firm has taken a majority stake in the port of Pireaus, and the giant $8-billion Hellanikon marina and real estate project on the site of Athens’ old airport is finally under way.

Yet, since reform goes to the heart of the relationship between the state and the population, recovery and reform will take a long time, perhaps as long as 15 years.

For fixing the current troubles requires stripping away the self-deception of politicians, ending a system in which they are comfortable in favouring redistribution over growth and immediate fixes, to structural reforms necessary for state and private sector efficiency.

And that particular political malaise is not just a Greek problem. DM

Dr Mills heads the Johannesburg-based Brenthurst Foundation, and has been in Greece; Kollias is a property lawyer in Athens.

Main photo: Protesters hold placards written in the Greek, German and English language during a demonstration in front of the Greek Labour Ministry in Athens, Greece, 04 July 2016. The Greek Communist party unions in the fields of tourism, pensions, workers and students staged a protest against the social security law and unemployment. EPA/SIMELA PANTZARTZI