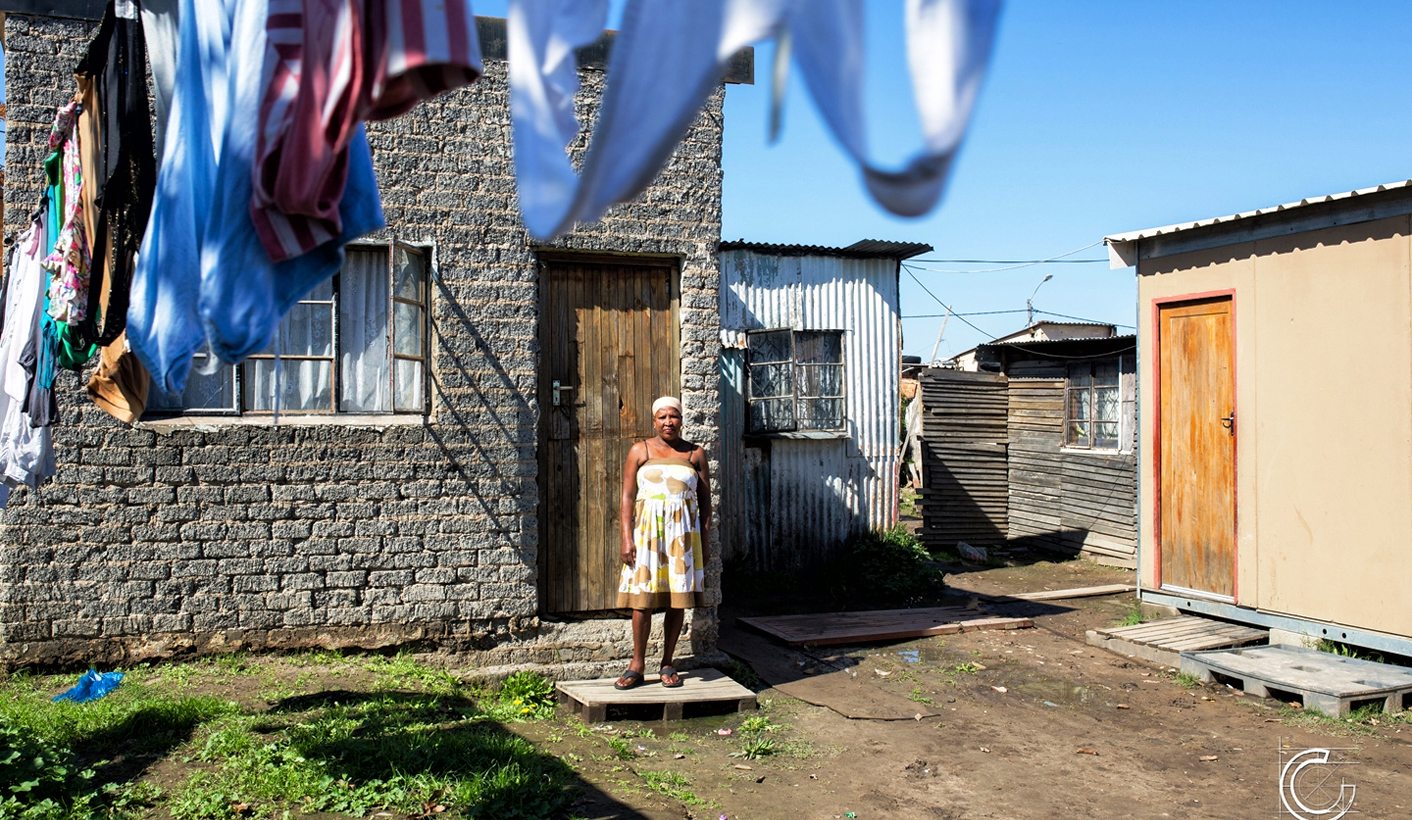 Buffalo City tenants are still waiting for their humble homes to be repaired after decades of hoping. By Sumeya Gasa for GROUNDUP.

With a clipboard and a stack of questionnaires in the crook of one arm, Mary Visagie, 54, steps onto planks covering a pool of stagnant water to unlock her front door in Sonneblom Street, Buffalo City.

She is a tenant in one of the low-cost homes lining this ramshackle street. Built by the apartheid government, the houses have been neglected for decades.

Two years ago, the local ANC government set aside R500,000 in the 2014/2015 housing budget to upgrade 163 houses on Sonneblom Street and the surrounding area, and the community breathed a collective sigh of relief.

Contractors made site visits and plans began to take shape. But then progress came to a halt, dashing residents’ hopes of better living conditions.

Today, the residents of Parkridge and Bamford live in a mist of deferred promises and unanswered questions as local, provincial and national government shift the responsibility between them. In the meantime, residents continue to pay their rent and rates to the Buffalo City Municipality.

For the last 22 years, the residents of this town voted ANC.

“I’m a born ANC,” Visagie declares, clicking her pen. “But the officials, they don’t do what they’re supposed to do.”

Buffalo City is one of just three metropolitan areas that has remained an ANC stronghold, receiving more than 50% of votes in the August municipal elections. But the number of ANC  supporters in this region dropped from 69% in 2011 to just below 60% in 2016.

An ANC and a DA T-shirt hang side-by-side on a washing line in Parkridge. Photo: Sumeya Gasa

Visagie remembers when the apartheid government promised to rebuild the houses. “I think I was seven or eight years old then – my father was still alive,” says Visagie.

Years later, the mandate was handed over to post-1994 Reconstruction and Development Programme (RDP).

“They [my parents] were also promised that these houses would be rebuilt. So it was (a) long time ago. Years and years back.”

Today, these houses resemble ancient ruins, with moss growing in the crevices of gouged out ash brick walls.

Visagie’s house is a sponge of damp, unpainted walls and a floor sodden by rain and groundwater that chews away at her furniture.

She is one of five members nominated by her community to form a steering committee to represent them in dialogue with local government. They spent a weekend last month conducting a social audit – collecting the testimonies of residents about housing and living conditions. Wearing politically neutral white T-shirts and armed with clipboards and pens, they handed out questionnaires provided by Afesis Corplan, the local NGO assisting them in facilitating the campaign.

After decades of waiting for government to fulfill its promises, they say the time has come for a different intervention – one aimed at promoting accountability and social cohesion between local government and the communities it’s supposed to serve, by involving residents in audits and engaging councillors directly.

Former Ward Councillor Vimbile David Mbinqo confirmed that in the 2014/2015 financial year, an amount of R500,000 had been allocated to revamp 163 houses in the municipality.

He says he held very little power over the actual disbursement of the money allocated to upgrade houses in his community.

“This issue is not a mandate of Buffalo City as a municipality. That’s the mandate of the Province and National,” Mbinqo explained.

Early last year, he says, he was informed that the upgrade of the houses would not continue. The message came from the provincial minister of human settlements.

“We were not given a platform to raise any questions because they said, no, no, it was directly from the minister.”

Notwithstanding the copy of the budget in his hands, Mbinqo had to accept that he would not be able to explain to his community what had happened to the project that had restored their hope.

“The structures that we live in, it’s not worth it for a human,” said another resident and member of the steering committee , 64-year-old “Aunty Hazel” Groep.

“If you go around to those old houses for which the people continue paying rates, the conditions of those houses is really bad.

“I’m staying here in Parkridge with those people. Some houses there don’t even have a roof,” Mbinqo said. “I so wish this could be a priority.”

Responding by e-mail on behalf of the Head of the Department of Human Settlements Gaster Sharpley, Quinton Williams said funding for the Parkridge Rectification project had indeed been approved, but it could not be implemented because the Rectification Programme was discontinued in the National Minister’s directive to the MEC dated 15 May 2015.

The statement said: “The allocated funds are de-committed and channelled to other human settlements programmes. Once government restores Rectification Programme activation of project funds implementation of the project shall take place – we cannot determine time frame thereof.”

Mbinqo said while rent and rates were paid through Buffalo City Municipality, the title deeds to the houses were held by provincial government and the task of renovation was the duty of both provincial and national government.

Approached for comment, the spokesperson of National Department of Housing, Ndivhuwo Mabaya, failed to respond and instead referred GroundUp back to provincial government. DM

Main photo: Mary Visagie stands on top of a crate placed above the puddle in her doorway. Photo: Sumeya Gasa