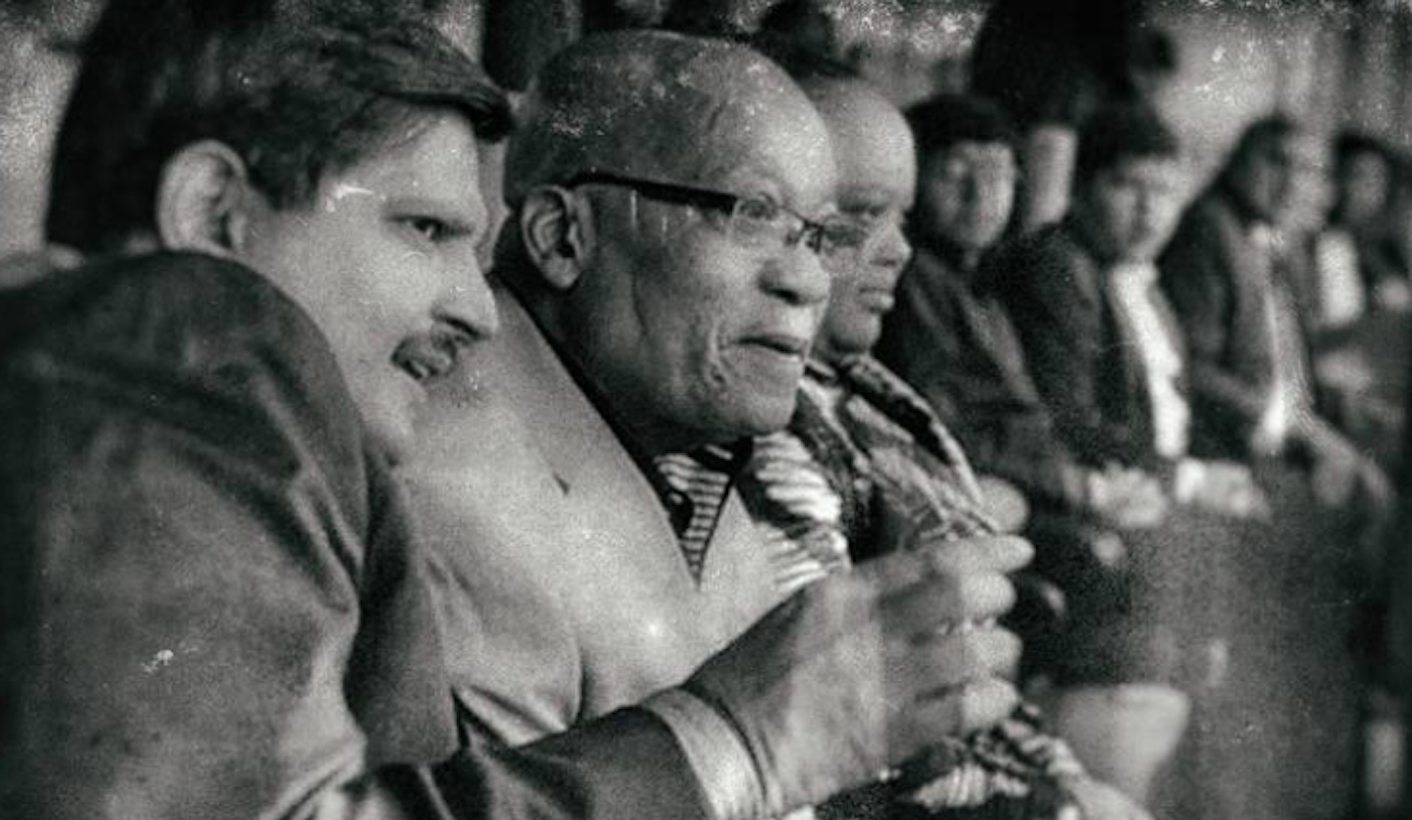 There is one question that should keep every South African up at night: Why did President Jacob Zuma fire Nhlanhla Nene? Nine months later, there is still no reasonable explanation as to why the president, who swore to “devote myself to the well-being of the republic and all of its people”, indulged in such reckless behaviour, costing the country billions. There is now a lobby of people in the ANC willing to lie, as Mosebenzi Zwane did, and sacrifice their reputations, their organisation, our constitutional democracy and South Africa’s future. They all have one thing in common: unwavering loyalty to the Guptas. By RANJENI MUNUSAMY.

One of the recommendations in Mineral Resources Minister Mosebenzi Zwane’s now infamous media statement on South Africa’s banks said that his envisaged judicial enquiry should look into the relevant reporting structures set out in the Financial Intelligence Centre Act and the Prevention of Combating of Corrupt Activities Act. One of the reasons for this, Daily Maverick understands, is to open the way for the Financial Intelligence Centre (FIC) to be moved from reporting to the Minister of Finance to fall under the ambit of the Department of State Security.

Zwane’s statement issued on Friday claimed that the recommendations of an inter-ministerial committee on the shutdown of the Guptas’ bank accounts were adopted by Cabinet. The main recommendation was that President Jacob Zuma should appoint a judicial inquiry into the closure of the Guptas’ accounts. The Presidency has since repudiated the statement, saying it was issued in Zwane’s “personal capacity”.

So whose position was it reflecting then?

Unlike others in Cabinet, state-owned companies and in ANC structures who are loyal servants of the Guptas, Zwane has not even attempted to camouflage whose bidding he is doing. As with his trip to Switzerland to facilitate a deal with Glencore on behalf of the Guptas, Zwane has not bothered to deny now that he is the Guptas’ faithful emissary. In his clumsy attempt to blackmail the banks to reopen their accounts, Zwane did not mind lying that Cabinet had approved his recommendations, which included an investigation of the powers of the South African Reserve Bank.

With regards to the FIC, Zwane’s statement was not clear on what exactly the judicial enquiry should investigate. But sources in government say that he has been campaigning for legislation to be changed for the FIC to report to State Security.

The FIC operates as an independent entity and its role is to combat money laundering and identify the proceeds of unlawful activities. It is not an “intelligence” outfit, as envisaged in the National Strategic Intelligence Act, but was established in 2003 in terms of the Financial Intelligence Centre Act to develop financial intelligence in accordance with international standards and requirements. The FIC shares information with law enforcement authorities, supervisory bodies, intelligence services, the South African Revenue Service (SARS) and other local and international agencies.

The proposal to move the FIC to report to the Minister of State Security would make South Africa noncompliant with international standards and OECD obligations.

Does Zwane and whomever he is collaborating with care? Of course not.

They see the FIC as a threat to their interests, particularly because it reports to Minister of Finance Pravin Gordhan. If the FIC is moved to State Security, even though this would be illogical in terms of role and of international standards, its ability to detect money laundering and the proceeds of crime could be controlled. It would then become another incompetent institution that might perhaps be used as a weapon against political foes.

State capture is not only about the directing of contracts into the hands of politically connected people. It is about the use of all facets of the state, like the Hawks, Department of State Security, the National Prosecuting Authority and SARS, as the instruments of a political faction.

The big prize remains the National Treasury, which is out of bounds for as long as Gordhan and the current team of officials keep their jobs. The concerted campaign to lay criminal charges against Gordhan would not only dislodge him but would probably lead to a spate of resignations of senior officials from the Treasury. That would clear the way nicely for a contingent of flunkies to be installed in their places.

City Press reported that there was also a plan to strip the Treasury of some of its powers, including oversight on procurement systems. The paper said it is being mooted that the chief procurement officer, Kenneth Brown, no longer report to Treasury but to the Presidency instead.

All this would be easier to achieve once Gordhan is out of the way. The mission to charge him and have him fired is proving difficult, mostly because no crime was committed. The Sunday Times reported that the Hawks met former finance minister Nhlanhla Nene and his lawyer last week in yet another desperate attempt to secure state witnesses against Gordhan. Former SARS commissioner Oupa Magashula had also previously been questioned to secure his co-operation.

In the meantime, efforts are still being made to discredit Gordhan politically. On Sunday the ANC Women’s League (ANCWL) appeared to blame Gordhan for the public furore around the Hawks’ pursuit of him.

“We feel that it is very wrong of any member of the ANC to raise issues the manner in which they are raising their issues. If you are a member of the ANC and being called to account, you must just go and account, like the issue of the finance minister,” ANCWL secretary-general Meokga Matuba said following a national executive committee meeting. “We are very much worried about the sudden interest of everybody, your NGOs, civil society, protecting the minister of finance. That minister is being deployed by the ANC, and he must account to relevant structures.”

Even more bizarre was a media briefing by Umkhonto we Sizwe Military Veterans Association (MKMVA) last week, when they attacked their “comrade”, Gordhan, and pledged to support the Hawks, led by an apartheid-era policeman, Mthandazo Ntlemeza.

Des van Rooyen, who served in Gordhan’s position for four days, condemned his Cabinet colleague for following legal advice not to present himself to the Hawks. MKMVA chairperson Kebby Maphatsoe pledged support for the Hawks, saying there was a “well orchestrated and deliberate attack” on the police unit.

“The Hawks is but one of those institutions created by an act of Parliament to enforce the law. Why then is the Hawks not being given the same affection, protection and support in the latest investigation?” Maphatsoe asked.

If that was strange, his love for and loyalty to the Guptas is even more bizarre. In an interview on Wednesday with Stephen Grootes on 702’s Midday Report, Maphatsoe said the Guptas were “friends of MKMVA” and their relationship would not change.

“If they are attacked unfairly we will defend them,” he said. “What we are seeing is xenophobia, racism… it’s hatred against the family which is doing business in South Africa,” Maphatsoe vented rather emotionally.

Last weekend, ANC deputy general secretary Jessie Duarte also felt the need to show the Guptas some love while turning the knife in her comrade’s back. While accusing Gordhan of “grandstanding” and being part of “an international campaign against South Africa”, Duarte defended the Guptas and bemoaned them being “run out” of the country. Speaking to the Gupta-owned ANN7 television, she said it was other companies, not the Guptas, who had undue influence in South Africa. It appears that Duarte was on her own frolic in the interview, as ANC Secretary-General Gwede Mantashe would not confirm that she was representing the views of the party.

But like Maphatsoe and Zwane, Duarte will probably still go to the wall for the Guptas. She wouldn’t be alone. An assortment of ANC leaders in Cabinet, the ANC Youth League and in the provinces have the kind of loyalty for the Guptas that surpasses the closest of friendships. Up to now, it was comradeship developed during the liberation struggle that bound people closer together than family members. But under the current leadership, ANC members see each other as enemies and threats to their respective camp’s survival.

People are willing to sacrifice those they fought alongside in the liberation struggle, the rule of law, the well-being of millions of South Africans and the tenets of our democracy, all for this family. We can only assume that this loyalty is bought. But how much does it cost to sell your soul?

The firing of Nene showed just how far this loyalty goes, the dangers to our nation and the contempt for South Africans and the losses we suffered. Although the Guptas have announced the sale of their shareholding in South African businesses, there is no indication yet that their grip on ANC leaders will be released any time soon.

Until they stop paying the piper, they will keep calling the tune.

Therefore, we need to live in constant fear of the next moves to satisfy the Guptas’ agenda. And find out what the asking price is for a comrade and a country? DM