In photos: High school protests spread to the Western Cape 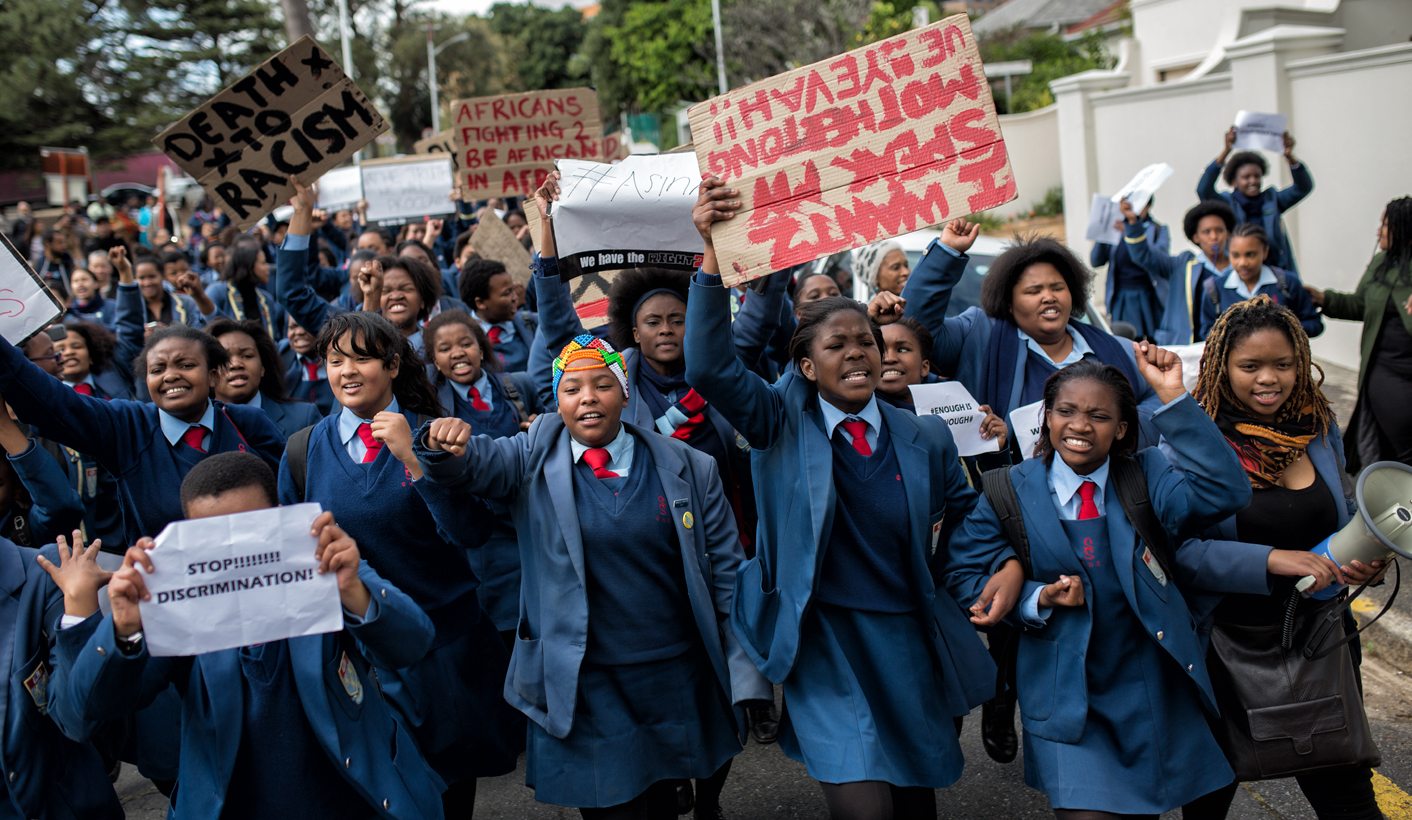 Learners and parents at Sans Souci High School have called for Principal Charmaine Murray to step down, as protests in solidarity with learners from Pretoria Girls High School spread nationwide and more learners speak out against schools’ racist policies. By Sumeya Gasa and Shaun Swingler for CHRONICLE.

On Friday, around 150 high school learners gathered at Newlands Pool parking lot in Cape Town, protesting alleged racist policies at Sans Souci Girls High School’s code of conduct. A number of pupils were barred from entering school grounds as they protested against  school policies that punish black learners for speaking their home language and wearing their hair natural.

The protest comes as learners from Pretoria Girls High School continued to speak out against the school’s racist hair policies, instructing black girls to either get rid of or chemically process their hair to flatten it. A number of schools across the country have begun to review their policies, in an attempt to make them more inclusive.

Learners from neighbouring schools showed solidarity with their Sans Souci counterparts, while they sang and danced to struggle songs.

Pupils came bearing placards with phrases such as, “I am an African original” and “they tell us to leave our cultures at home”, inscribed on them. A number of parents and legal representatives also made their support for the high schoolers’ cause known.

Moments before midday the learners began to make their way towards the school gate to hand over a memorandum to their principal, Charmaine Murray. Instead, they were met by the Western Cape Education Department’s (WCED) Deputy Director General for Institutional Development and Coordination, Tau Matseliso who received the memorandum on behalf of the school. A number of learners expressed their displeasure with the arrangement, with one saying, “we told Murray yesterday that we will be handing over a memorandum. Why isn’t she here?”

Another learner told Daily Maverick Chronicle the memorandum is addressed specifically to Sans Souci Girls’ High and not the WCED.


“If we were fighting the Western Cape Education Department we wouldn’t be outside the gates of Sans Souci. We are not crazy,” said another learner.

Matselito attempted to pacify the crowd without much success, as he failed to let the pupils know when to expect a response.

“You have sold us out! You are black like us and one day it may even be one of your kids going through the same thing!” One learner shouted at Matseliso.

Learners and parents called for the principal, Charmaine Murray, to step down.

Western Cape MEC for Education, Debbie Schafer, met with parents on Friday afternoon and promised the school body she would investigate the allegations of racist policies. DM